@angelrey1990 51
about 2 months ago (Edited)
Splinterlands 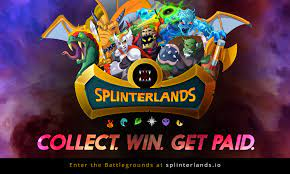 Splinterlands is a blockchain-based collectible card game. Collect digital assets, battle thousands of other players, and win crypto and other rewards!The recent rise of Splinterlands asset prices on third-party markets has caused a situation in which players are able to earn a significant amount of rewards with only the purchase of the Summoner's Spellbook, and without ever needing to acquire or even rent any in-game assets. While this may benefit the Splinterlands company in the short term (due to increased Spellbook sales), it is unsustainable for the overall game economy and therefore also bad for the company and the community in the long term.

It is very important to the overall game economy that players are always incentivized to get to higher leagues and obtain more cards, so when a situation like this arises it is critical that it gets addressed as quickly as possible.

For a healthy, long-term game economy, the earning opportunities must be proportional to the amount of in-game assets held.

In order to address this issue, we plan to implement the following changes on Thursday, September 30th, 2021, after the end of the current ranked play season, and they will apply immediately after they have been released.

The first area that needs to be addressed in which rewards given out are not proportional to in-game assets held is the DEC rewards for ranked battles.

Starting shortly after the end of the current ranked play season on Thursday, September 30th, 2021, the DEC rewards given out for a ranked battle win will be based on the minimum of the winning player's current rating and the maximum rating for their current league within the game.

This change will go a long way to properly aligning incentives for players to increase their collection power and move up into higher leagues.

Please note that in the near future SPS rewards will also be added for ranked battle wins in addition to the current DEC rewards, and this change will apply to the calculation of SPS rewards as well.

The second area that needs to be addressed is the rewards given out in loot chests in Bronze/Novice league specifically. Starting shortly after the end of the current ranked play season on Thursday, September 30th, 2021, loot chests earned in Bronze league will give out Credits instead of DEC tokens, and will also have a lower chance of containing reward cards as compared to loot chests in Silver league and above.

The new percentage breakdown of receiving the different types of rewards based on league are shown in the table below: 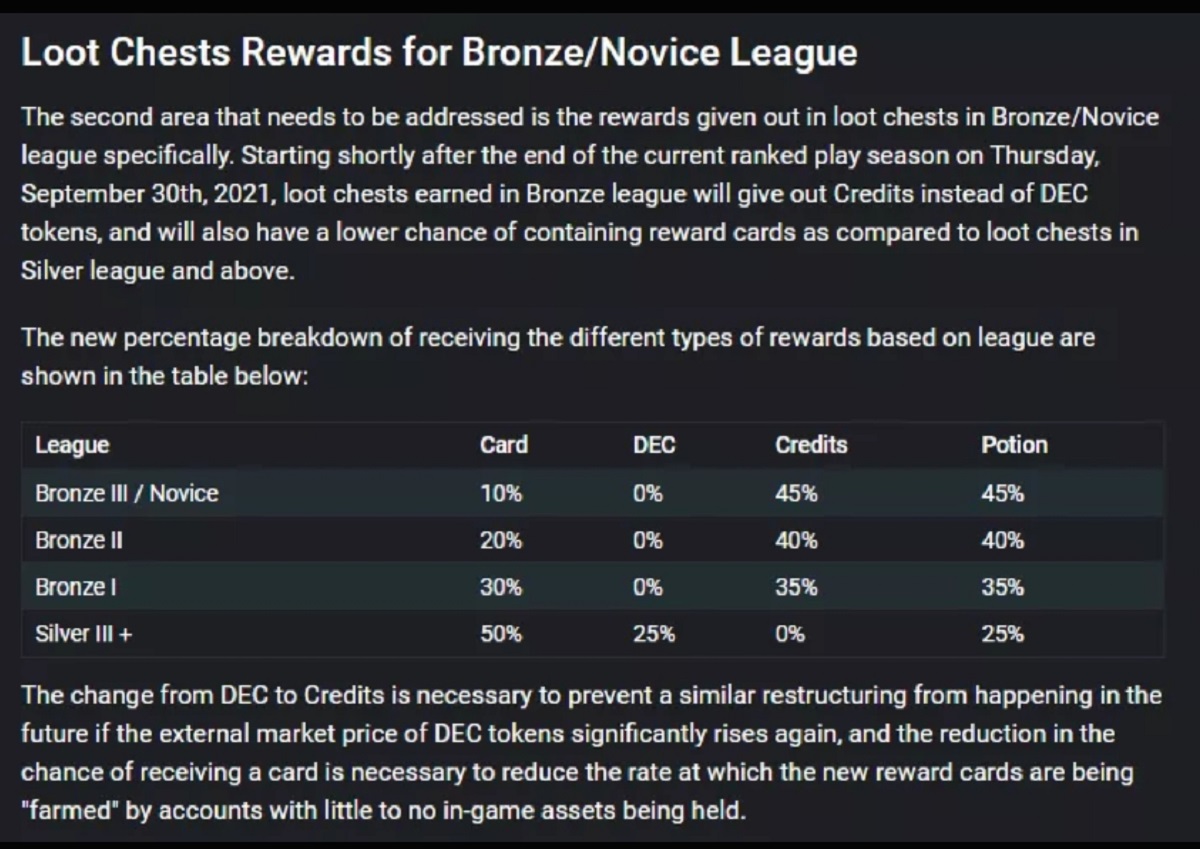 The change from DEC to Credits is necessary to prevent a similar restructuring from happening in the future if the external market price of DEC tokens significantly rises again, and the reduction in the chance of receiving a card is necessary to reduce the rate at which the new reward cards are being "farmed" by accounts with little to no in-game assets being held.

As always, we will closely monitor these changes and the overall game economy and will adjust if/when necessary in the future. Our goal is always to ensure that we build a sustainable system to the benefit of everyone in the ecosystem over the long term.

My personal OPINION about this is the update to be release soon is a GOOD NEWS because it really helps the game economy, stability of tokens and sustainability. For those who are against this update who think this is a BAD NEWS, think about this.

No matter how famous the game is, if all players think about is just earning, withdrawing their profit everytime they can, The value of tokens in the game will fluctuate and affect its stability. The dev are trying to fix things right to make the token stable for the future of the game in the long run. SPS and DEC for example. So this game is not "free to play" but "play to earn". As long as you have more assets in the game, the bigger chance you will earn more if you are doing the right thing. The more you have assets the more you will gain and the lesser the assets, the lesser gain.

Whatever the changes are as long as your making profit, it is still an awesome game. If you want more earnings in a short amount of time, then play other NFT games that easily make profit but a higher chance of "RUGPULL" because the game couldn't sustain its economy.

So you have the options, you sell all your assets because you dont like the update and maybe leave the game or stay in the game and support what the developers are doing in this game.

Congratulations @angelrey1990! You have completed the following achievement on the Hive blockchain and have been rewarded with new badge(s) :

thanks, ill check that one