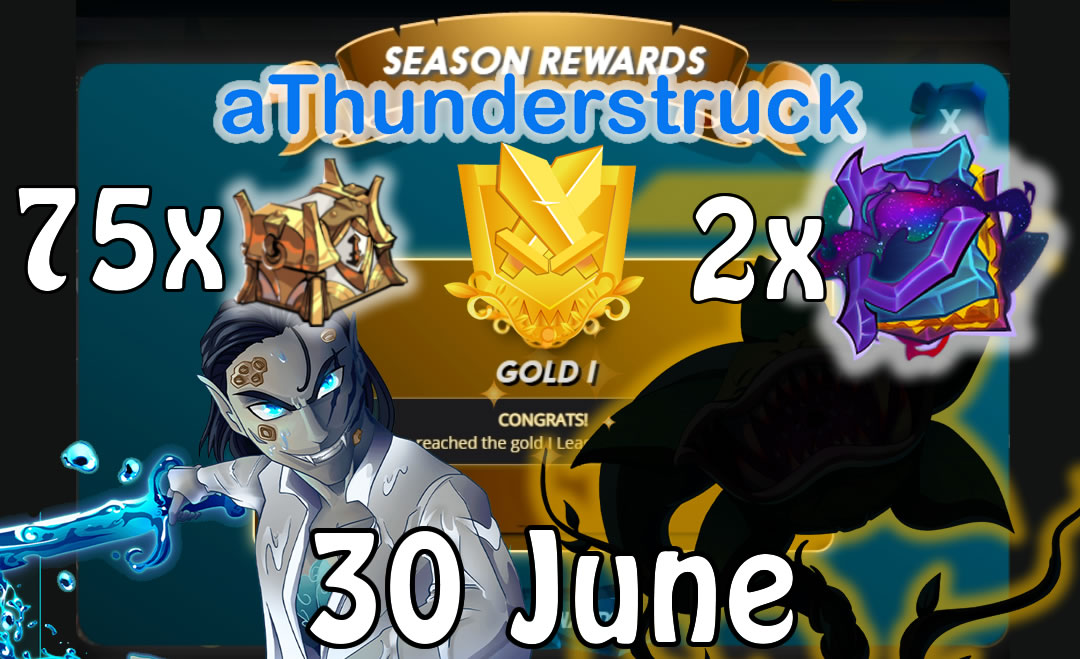 Ahoy, this June 30th the latest Season in Splinterlands has ended.

This time I couldn't include my last Daily Focus of the season in the opening rewards, because I've been busy in the past two weeks and sometimes couldn't properly claim them. Since there is currently a 24h runtime on the new Focus, it meant that the time at which I can claim my Daily Focus rewards has been postponed several times.

On the other hand I did get more End of Season Loot Chests! Last season I managed to get 64, but this season I was able to get 75 of them! I finished this season in Gold 1 like usual. I still played quite some battles in the last hour or two before the season ended to get those chests up to 75.

This time when I refreshed the page, the pop-up with the End of Season report and the claim button properly showed up and stayed! So I was able to have that one at the start of the video and I use that one to start claiming the 75 Loot Chests. 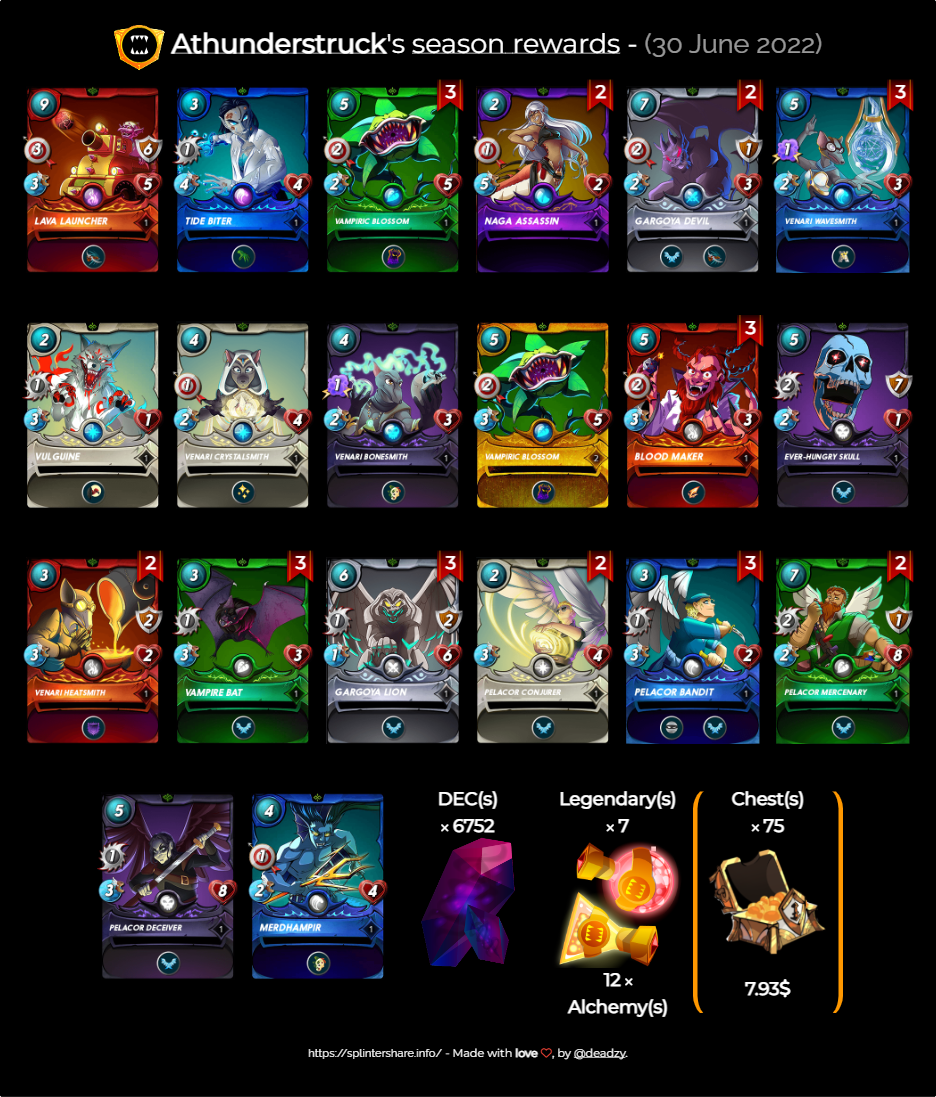 And in bullet list form the rewards I got are:

Sweet, some Epic cards and also a Gold Foil Rare card! That's some good rewards. No Legendary unfortunately, but perhaps I will see one with the next End of Season rewards! And wow that 5000 DEC drop was quite big! That can be used to buy some Epic or Legendary cards.

Throughout the season I got 2 Chaos Legion Packs from two of my different Daily Focus. Like usual I saved them to open after claiming my End of Season Rewards.

From opening them I notice at first glance there are only 9 cards to flip over, that means one is a duplicate.

These are the cards I got from opening them:

Some pretty good packs as I got 2 Rares and an Epic from them. No Gold Foil unfortunately, but perhaps I will get one in the next packs! 😄

It is pretty creepy the way everyone is ignoring what is happening to me and still going to Hivefest. Lay the dirty snatches out why dont ya. Fake it all you want creeps, its so obvious the blind eye you are turning. @fyrstikken told me what V2K and RNM was before they turned it on for me. Around that time he introduced me to @roelandp . I still have the emails between myself and @roelandp . This chain is centralized by design and @fyrstikken helped set it all up to fuck everyone, one by one, slowly into my situation. This is no joke you dumb mother fuckers, they shock you to your thoughts..... Hello????? It is in store for everyone you fools and your helping. Voices pulsed in your head and shocks to your thoughts??? Ignore me and help fuck innocent people for life? @roelandp and other top witnesses I know are involved with @fyrstikken.. Wait until people find out you conspired to enslave them with this shit. I am not crazy and you know it. they are doing this shit to me and told me what it mother fucking was BEFORE THEY TURNED IT ON! Your acting like naive children or maybe you are just part of the problem? You look like sociopaths. Everyone should unplug from HIVE until they are caught, .your. celebrating and ignoring my obvious, you look like fools. You know who is doing it....they are trying to kill me with it. The Havana Syndrome is real too you slave trading V2K, RNM enabling fuckers. Arrogantly play ignorant you Creeps, your setting the table for trafficking and total enslavement. I did not know I was circumvented until a year after I was…..People here will be nice until it’s too late. There is no way to stop it once they have you. Grow the fuck up, this is not aliens, gods, celebrities or a medicate-able mental concern. It is 100% electronic and beast as fuck. You do not want this shit. https://ecency.com/fyrstikken/@fairandbalanced/i-am-the-only-motherfucker-on-the-internet-pointing-to-a-direct-source-for-voice-to-skull-electronic-terrorism ..... https://ecency.com/gangstalking/@acousticpulses/electronic-terrorism-and-gaslighting--if-you-downvote-this-post-you-are-part-of-the-problem

WOW 75 chests, Its good to see what the gold level players are getting, some good incentive for us beginner novice bronze players. I just have enough card power to get into silver but am struggling with card purchase strategies. I have a few gold foil and legendary cards which help to win some battles but I am thinking I am lacking in summoner cards. Should I be looking to get and merge 5 summoners into a L2 or adding some different summoners that are not available on the free deck.
!LOL


What do you do with a car whose wheels are completely worn out?
You re-tire it.
Credit: reddit
@athunderstruck, I sent you an $LOLZ on behalf of @new.things
Use the !LOL or !LOLZ command to share a joke and an $LOLZ
(7/8)
0
0
0.000
Reply

Yeah it was a lot of chests! How many did you get?
Well honestly I'm more of a silver league player. At least my cards are only at the silver league level right now. But in the last days of the season I move to gold and play pretty well there with them. Which is great to then get those gold End of Season chests! :D
My apologies for the late reply, I hadn't really been on Hive to properly see your comment until now!

Yes summoner cards are definitely important. Especially if you're using the starter ones, because using those gives you less reward shares for your season chests. Since you play in bronze, you can use Rare summoners at level 2 so if you could level them to 2 that would be good. As it'll allow you to bring Rare and Epic cards at level. So if you have some monsters at level 2, it would be great to also get summoners at level 2.
You can also rent some summoners and cards to play if you don't want to buy them right away. Some diversity in summoners for different rulesets is great.

Dear @athunderstruck, we need your help!