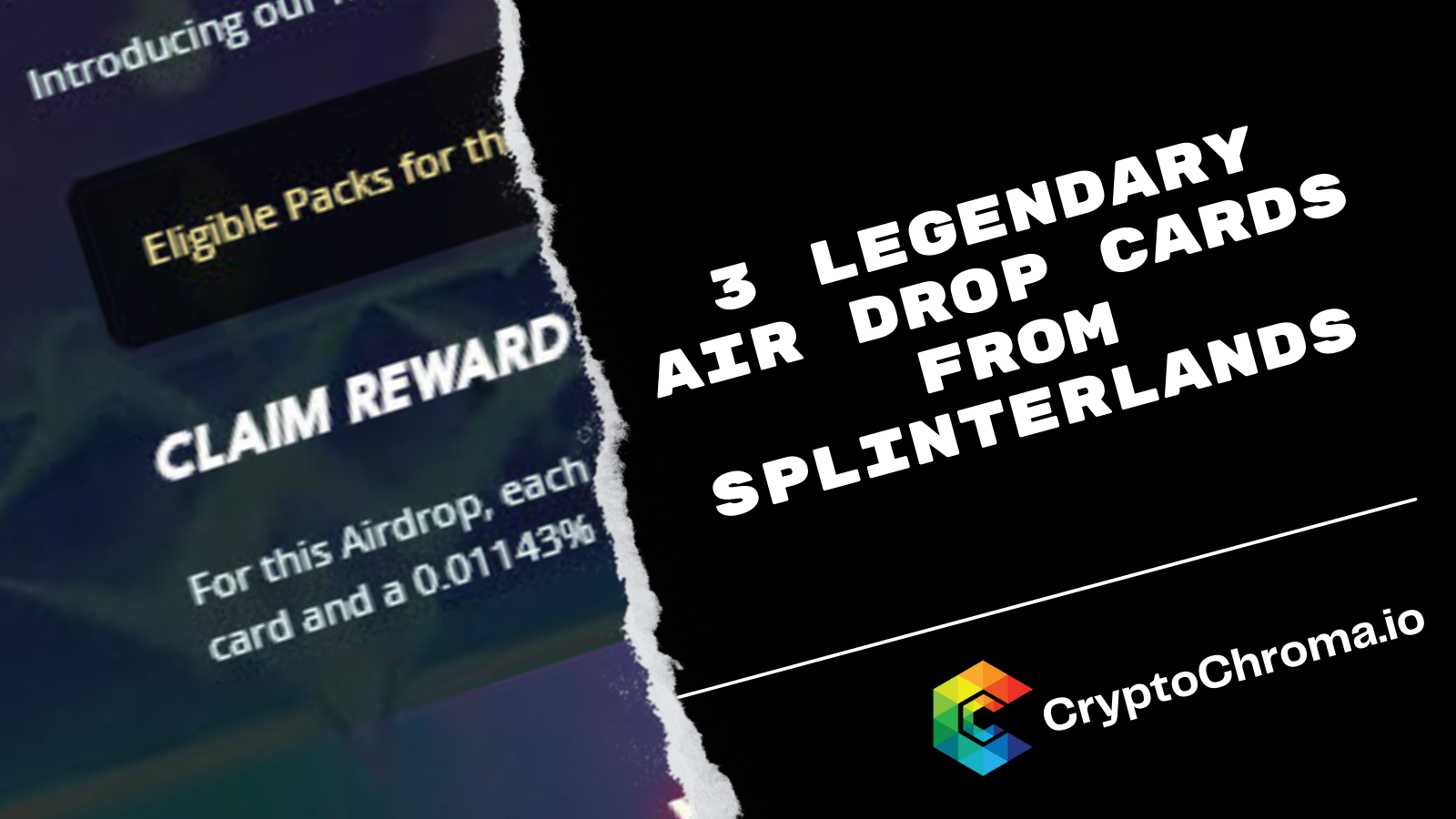 Splinterlands continues to deliver as it pushes out new Airdrop cards to those who have bought packs for Chaos Legion. I have to say I've faired rather well in my most recently claims. A rough estimate puts me around 3,850 packs needed to be bought in order to fully level up one legendary card from the airdrop. Currently for this airdrop I only sit at 1,226 packs which honestly isn't too bad. This isn't enough however to fully max out the deck and from the looks of it I'm going to need somewhere aroudn 2,000 to 2,500 packs in order to acomplish that along with buying some of the harder to come by legendary and epic cards off the market.

This is what I about figured I would be at on the airdrops. 6 cards of the needed 11 in order to fully max level this card which means I'll need to pick up 5 on the open market or get lucky with some pack openings. 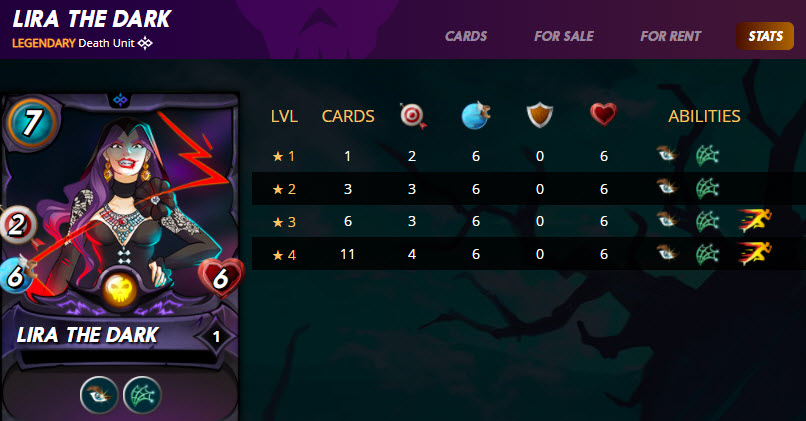 Lira comes with some pretty cool skills for a death splinterlands unit. At fully leveled up she increases speed of all monsters on the team along with snare that will bring down flying monsters and Opportunity which targets the monster with lowest health. With a sold 4 hit on range which could be buffed to 5+ from a summoner this unit can pack a punch for 7 mana.

Dang I got lucky on this one! 9 regular cards which only puts me 2 cards short of fully max leveling this card. Plus I picked up one gold foil! 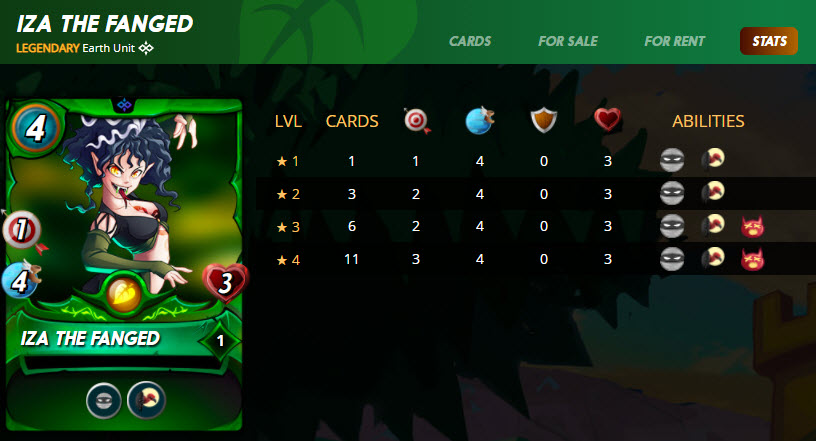 Iza is one of my favs of the three new drops. Most likely because I end up playing Earth second most compared to water. She packs a good punch for just 4 mana at 3 ranged and with an Earth summoner that can be pushed to 4. Her sneak ability gives her the ability to attack monsters in the back which I love! It's a great way to hit the enemys deck from two sides and quickly dwindle it down. Besides that she also has Scavenergy which gives her +1 health of her low 3 health whenever a monsters dies. Placing her in the right spot middle of the deck for battles could give her a decent health boost for the match. She also comes with Stun which is crazy powerful if you get lucky enough to hit it. This will make the enemy card do nothing for that round which can save your bacon!

I often get stuck with melee battles so Grum is a welcome addition for the front line. I was lucky enough to pick up 6 cards which is what I figured for all three of these airdrops which is decent. While I didn't get as lucky as with Iza it does put this card at level 3 of 4 already which has good stats. 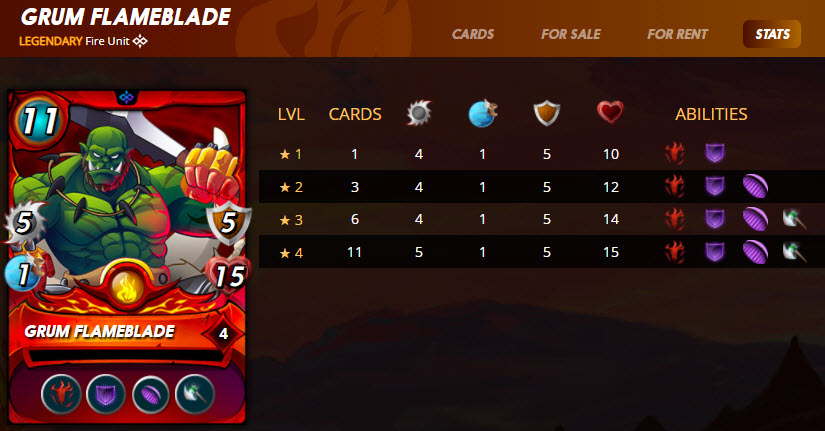 Let's take a look at Grums's stats. With 11 mana this one will only be used for higher level battles. However with a +5 sheild and a heafty 15 health it can take a beating on the front line! Put that together with 4 abilities Bloodlust. Each time Grum defeats a enemy he gets a +1 to all stats. He also sports a nice void armor which means magic must hit his sheild before his health a big plus there vs magic but not only that he also has Void which reduces the damage from magic attacks. Does the enemy have a high level card on the field? Grum takes care of them with easy with the Giant killer ability causing double the damage or 10 melee damage to that unit if it's over a 10 mana cost card.

Overall that puts these three airdrops at Around $300 as the older legendary cards I put at about $10 each which to be honest with you is stupid cheap right now. You could get yourself a maxed out legendary card on Chaos right now for about $110 each or less!

How did you do on your Splinterlands airdrop?

Congratulation for all the winning cards.
I don't have enough luck to get any above card.
I really like Grum Flameblade - he is very strong indeed.