Just less than 3 months ago, on September 23, Axie Infinity Lunacia Devs released information on a new Breeding system that was to take effect the next day, AND Again on December 8, A new update on Breeding arrived. This aroused my curiosity, so I decided to dig into the reasons for these constant changes. No doubt, anytime you hear or see new rules being implemented by top gaming devs, Take note of it because it either causes or prevents an In-game imbalance that the devs have foresighted towards. In Axie Infinity, the two main tokens that are used for breeding are SLP and AXS. SLP, the token used to reward players of Axie Infinity which can be farmed indefinitely, and AXS, the governance token of Axie that has the highest market value.

How two Tokens in One Single Game can have such a wide disparity in value is a question I've always asked myself? AXS is currently trading at $102 and SLP, at $0.038. That's a scary difference between them, and shouldn't the ecosystem, community, and hype surrounding Axie Infinity have caused the improvement in the value of SLP?. At least we can see that in Splinterlands the difference between SPS and DEC isn't that much, less than 50x in value.

The most obvious reason for this imbalance would be; SLP is the Major token for rewarding players. AXS is used too, but only the very-skilled top players get to win some by competing and finishing top in the seasonal leaderboards, but for SLP? Everyone manages to earn some all right and even the less skilled players can manage to win around 1000 SLP every 2 weeks - the verdict would be that a larger base of players are selling SLP, killing its value since there is no High-Cost Use case for it.

In the past, Breeding Axies cost - about 2 Axs, and On September 23, this cost was Modified to 1 AXS and 600 SLP, Now it has further been slashed to 0.5 AXS and triple the amount of SLP (1800). What pattern do you see?. Well, what I can deduce is that (1) Axie Infinity is trying to reduce the cost of breeding Axies For Breeders, (2) They want to improve the Incentives of playing Axie Infinity for the Gamers 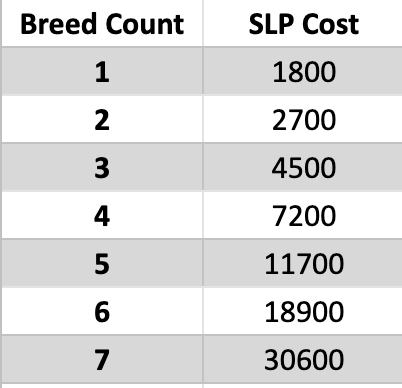 The in proportionate value of AXS to SLP means that no matter how far they reduce the fee of AXS and increase the SLP portion, they are actually reducing the total Cost of Breeding;

Great Move for the Entire Economy

This has been a great move that, As I see it, favors the entire player base Economy and projects better sustainability and long term growth for Axie Infinity because; So the next time, you see such an update in whatever play2earn community you belong to - take a breath, then take a moment to evaluate it with (you know) brains, doing this has helped to show me the kind of people we have at Axie and their ambition for Axie Infinity into the future, the next update I would be looking forward to is an element that can spice up the gameplay of Axie. Yeah, I heard there's something called BattleV2 cooking.

Thanks for reading,,
Chel_

Congratulations @chel-koby! You have completed the following achievement on the Hive blockchain and have been rewarded with new badge(s):