I ended up buying a batch of 100+10 Claos Legion packs in Splinterlands as they became quite favorable to actually buy in my vies. This is my reasoning and the overall results opening them...

I tend to go about things in a more rational way without giving into the addictive gambling side of buying packs so when I do end up buying them I need to have some good reasons:

In total at the time I paid around ~220$ including the value of the vouchers for the 110 packs which got my total up to 495 close to what is needed to guarantee at least 1 airdrop. I had to open them over the course of a couple of days as more potions that are needed still were coming in from the rewards. 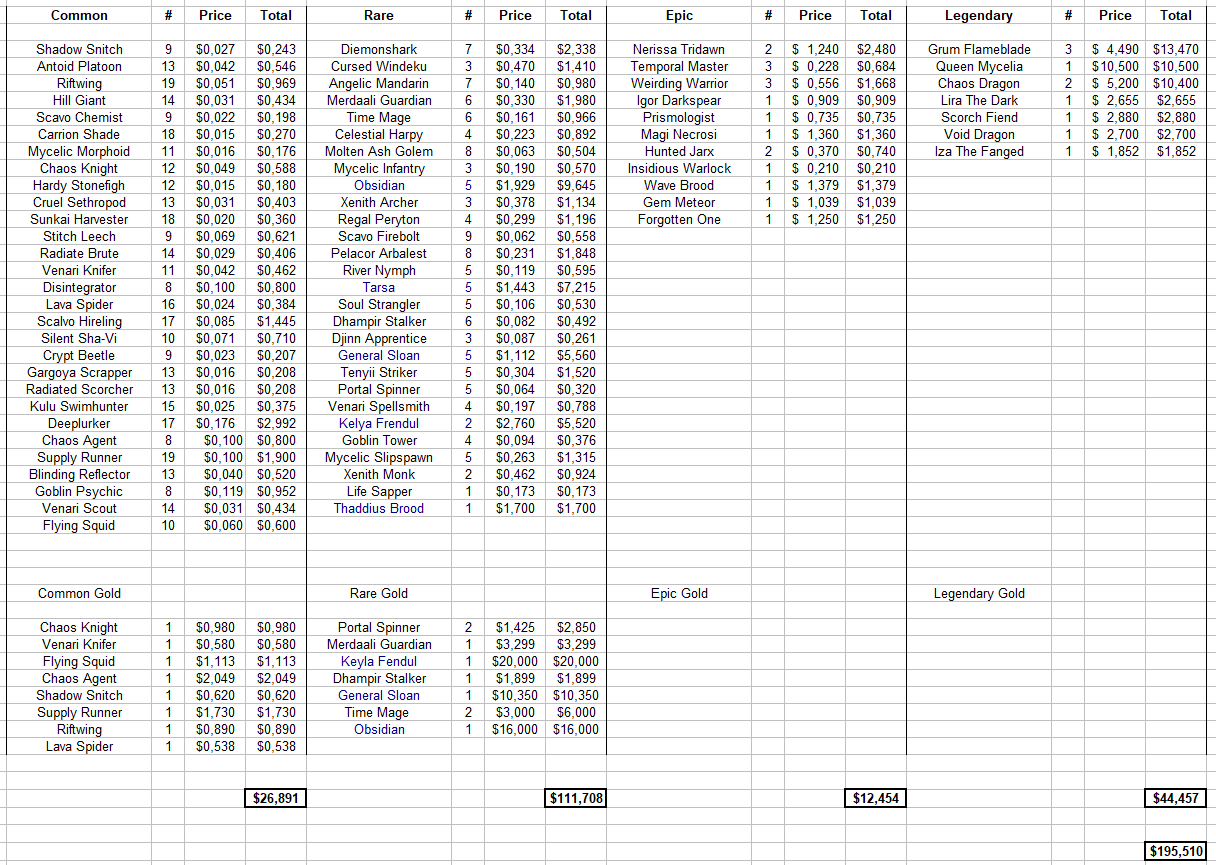 While I failed to get any Golden Legendary Cards or even Golden Epics, I did get not 1, not 2, but 3 Golden Summoners!

I also got a Queen Mycella which is a card I'm still looking to buy. Overall all cards combined at the current value is 195.510$ so I ended up with a slight loss overall as the purchase price was ~220$ without counting the increase in Airdrop chance which for sure will be worth enough to make it a profitable buy. I also do believe the values over time will rise and I already sold 1 card for 38376.79 DEC

Just looking at what you on average expect to get from opening packs with Potions, I still very much prefer buying cards directly on the market. Especially Epics & Legendary cards feel quite cheap on the market compared to the actual chance that you have to get them from packs. (27 out of 550 cards). However, when you are able to pick up packs at the right price and have enough potions stacked up from rewards to open them, it's quite hard to actually lose money on them and opening them is a lot of fun!

Crypto & Blockchain-Based Bookies and Exchanges that I'm personally using as they allow anonymous betting with no KYC or personal restrictions...

Indeed, You won't hear me complain about those. It's hard to actually make a profit buying cards though as the most expensive card for Chaos Legion right now is 'only' worth 150$. If it wasn't for the airdrops, I would just stick to buying cards so they do have a nice mechanic going there for sure.

Did the same, got 118 with the DEC used for airdrop, but I open them slowly when i get the Lege and Alch potions. You were still good and lucky. Especially if you get something extra on airdrop.

What are your thoughts on Riftwatchers?

The way I see Riftwatchers is as an expansion for the real whales. For me, it's too much and too soon as I'm still in full accumulation of Chaos Legion cards. The game also still feels very fresh with the current cards and the balance is great. I'm sure Riftwatchers will pump the price of SPS a bit, but I don't like the fact that their only real play is to print more cards at quite a high pace which kind of devalues all the other cards in a way. Regardless, I think the game is in a great spot right now as it's actually fun and enjoyable with a lot of room for new players/money to come in.

The way I see Riftwatchers is as an expansion for the real whales. For me, it's too much and too soon as I'm still in full accumulation of Chaos Legion cards.

Wow all those gold summoners. I managed summoners but not GF. The chaos packs are less than $2 now. I buy some and want to hold on to it, but each time I alway open it. As I believe it will rise in value !