Good night friends.. We got a new weekly challenge, the common reward card from the water splinter, the wave runner. This is a melee monster with the reach ability, so I already know where I'm going to place it ^^. This is my favorite splinter, the dragon splinter, because I can mix it up with different splinters and remain a bit more unpredictable against my opponents. I love this summoner, Daria Dragonscale lets me overpower most strategies with a savage melee offensive. I believe more people should use this tank on bronze league, I guess most don't have a level 2 summoner, so they can't really take advantage of this card. At level 3 it gains 9 health and it regens +3 health each round, plus a good 4 melee damage that gets buffed to 5 melee thanks to my summoner. Wave Runner is a decent card for the water splinter. I'd rather use Manticore since I got one thats level 2, it has about the same stats but with 1 less mana and has flying, but this will do. A brand new card I just got from the new rewards! wooot! Pelacor bandit is a sneak melee card with only 3 mana that has 2 health and 3 speed plus flying. Not bat at all. Usually water strategies don't use sneak monsters so this should give a lot of variety to the strategies people use with water, instead of the magic magic magic magic spam lol I had 1 mana left and the only card I could place was this one. I should of put it at the last position, but made a mistake, it happens. Another great card for the water splinter. I like how it heals every round +2, it usually tanks the sneak attacks from most strategies.

My strategy here was just going all out offense with a melee formation, trying to defeat my opponent as fast as possible.

Mana: 26
The conditions for the battle were Standard and it was a 26 mana battle with any splinter.

At the start of the round, my Daria increased my damage and his summoner gave +1 shield to all my opponent's monsters. He used the Silvershield Knight and the Shieldbearer. I knew this was going to be a hard fight. His tank had a lot of health and shield and the Divine Healer was on the field too. Plus he had two sneak monsters buffed with the +1 melee damage. I was in trouble for sure.
The only card that attacked my tank was his tank, doing 3 damage, but my tank heals 3 every round. So his damage was neutralized by my tank's auto heal. Both his sneak monsters attacked my Water Elemental but I got a lucky miss and it didn't die this round. (This is why I should of placed the Albatross in the last position). 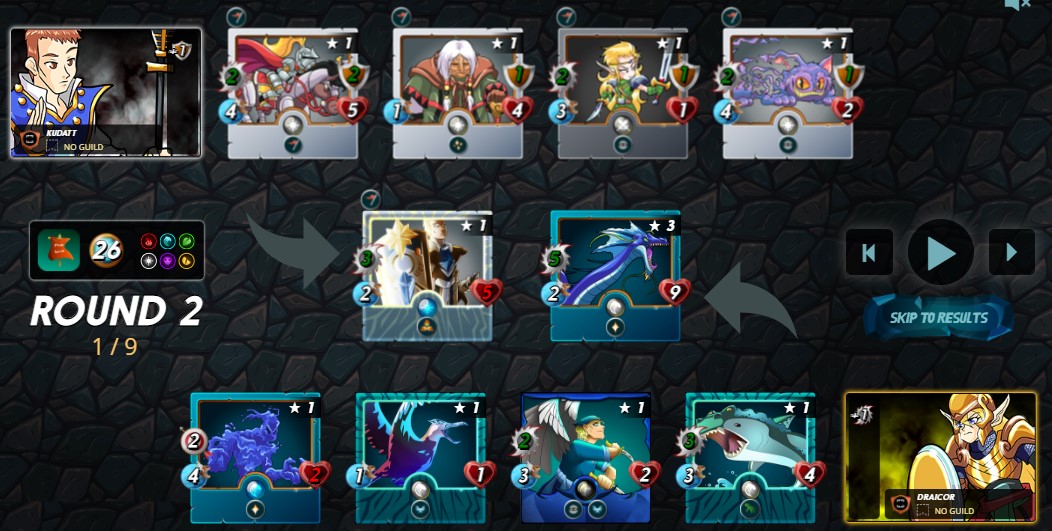 His tank died this round, but also my Water Elemental. 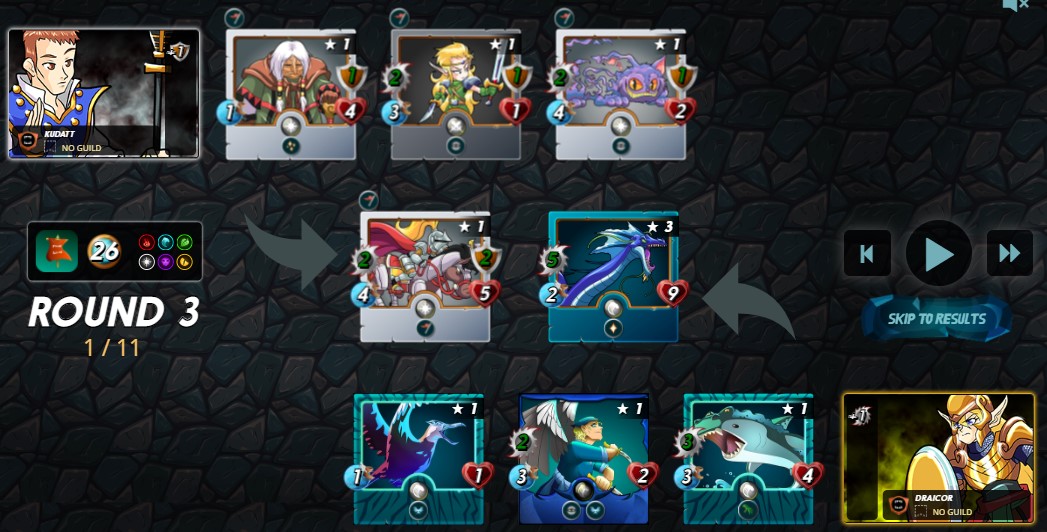 His sneak monsters killed my Albatross and my Pelacor Bandit, leaving me only with my Sea Monster and my Wave Runner, but my Wave Runner took out the shield of the knight and the Sea Monster did a whooping 5 damage to his Silvershield Knight and killed it in 1 hit.

Now it was just a healer as tank, and two low level sneak monsters with 1 melee damage. There was no way I could lose having a tank that heals +3 health every round, and I still had my Wave Runner. Both my melee monsters concentrated their attacks and took out the Divine Healer.

Since every monster had shield, it took two attacks to defeat them. So First the Wave Runner took out their shield (since his speed is higher than my Sea Monster's speed) and then my tank dominated with the 5 damage melee attack.

The Feral Spirit did a last attempt to defend itself, but it was no use, that -1 damage did nothing to my tank ^^. The Wave Runner dealt the winning blow and the battle was over.

If I had to choose over Manticore and the Wave Runner, I would pick Manticore anyday. The -1 mana cost plus the flying ability make it more versatile for me, but I had to level it up to level 2 for me to find it useful (highly recommend it by the way), but only if you combine it with Daria Dragonscale level 2 too. If Manticore wasn't a choice, I'd say the Wave Runner is a very budget friendly card, since it has 2 melee damage on level 1. As was demostrated by this fight, it can be deadly if combined with a good tank and some damage increasing card, like Daria or even the Demented Shark to grant a +1 buff to the damage.
Thanks for reading, and if you found this interesting, please leave me an upvote, thanks!

It's a close fight but you still got him/her at the end. Congrats!

Ahhhh new reward card on the battlefield.
Well done there with the water.
Keep on battling.