@dubble 66
about 2 months ago
LeoFinance 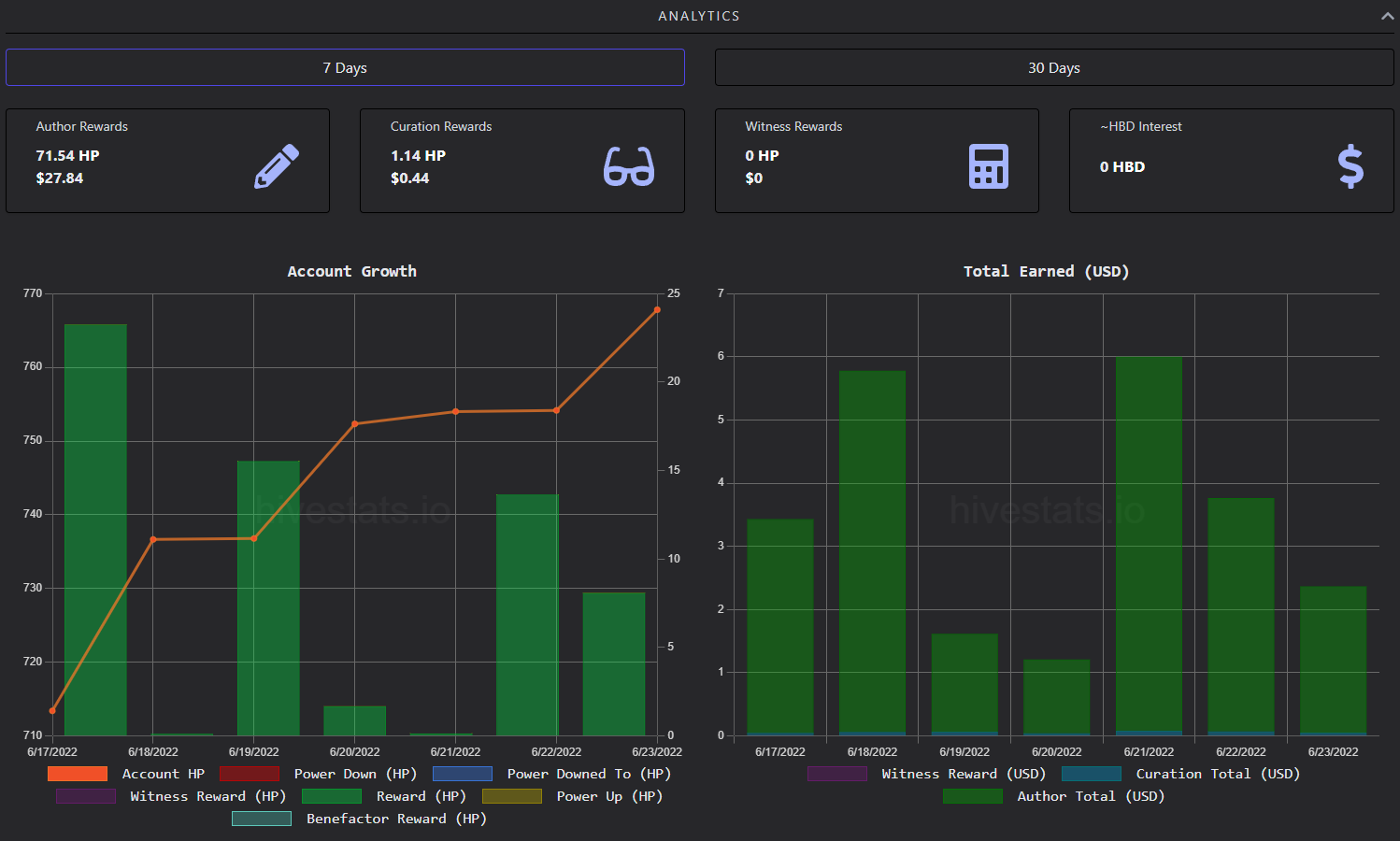 Hello all! I've had some great strides this week in my accounts growrth.

Incredibly happy with my stats this week, at this rate I can see myself surpassing the 1,000 HP mark a lot sooner than later!

In comparison to last week my curation rewards have dropped in half, again most likely due to the markets fluctuation in the price of Hive effecting votes values in terms of USD which I am fine with.

It will all even itself out eventually, especially while the price of Hive is low it makes for the perfect opportunity to stack as much as you can! When the price does average out and we see votes increase in value all the effort would have been worth it when your upvotes are powering your account up in significant amounts daily! 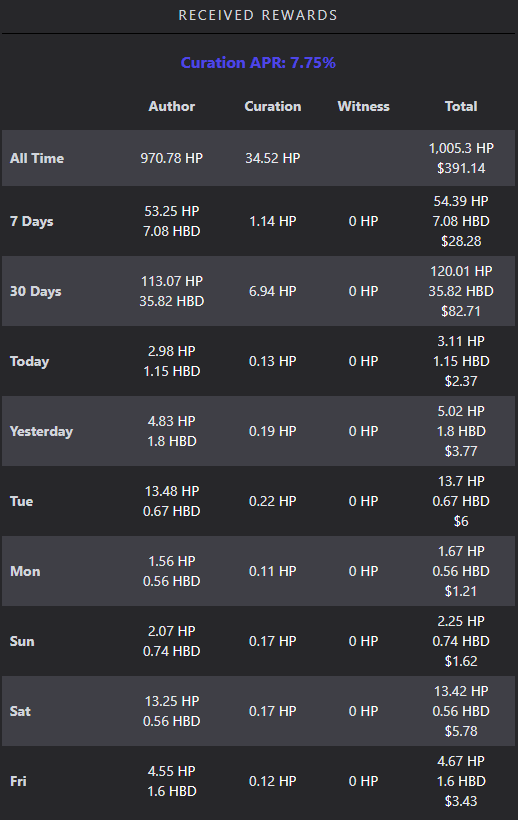 I've been depositing liquid Hive into my savings account to compile it safely and was in the process of compiling my HBD pay-outs also but over time I decided I would withdraw my savings and try trade my HBD for Hive.

I withdrew my locked up HBD a couple of weeks ago and I've been waiting ever since to trade it up for Hive, I've been expecting another huge market dip and presuming we're not out the deep waters yet but it's not happened in the last week, minor dips but nothing major so perhaps I am being too greedy in expecting a sub 0.30 Hive lol.

I should ideally probably trade it up now, any thoughts?

I wish Hive Savings had a small APR for liquid Hive but alas we can only compile HBD which is a pain to have it just laid about in my wallet like this If I haven't even traded it up for weeks!

I include my diesel pool liquidity in these holdings for anyone wondering! so some coins may fluctuate a tad more than others. I'll display which pools I'm providing LP for down below!

I've started accounting for DEC this week due to replaying Splinterlands, I've been enjoying myself and the grind, due to the game requiring rentals I don't want to have to think about the cost of anything plus I find its a somewhat good investment right now as the price keeps dropping due to the markets.

So I've traded up some SPT I had for Hive and turned it into DEC and a couple other loose token earnings I've had this week.

I probably purchased around 20k DEC this last week which has pushed my SPS earnings up to 3+ a day which is nice, hopefully those tokens will become more useful in the future also.

I've passed a threshold for the PGM token allowing me to call the bot more which is fantastic as I love these tipping tokens and their uses here on Hive, fantastic innovation for something that seems so simple, yet so enjoyable!

Another week with little to no change in our pools, I really want to enter some more LP's but I'm lacking the capital for specific tokens to make it worth it right now. I would consider a DEC/SPS pool but I'm unsure if they will count towards the airdrop, due to it coming to an end in around 33 days it can be an option for the future.

I definitely would like to see my tokens work for me and returns some yield in the off time while the airdrop is no longer, until we figure out what is next for the SPS token. 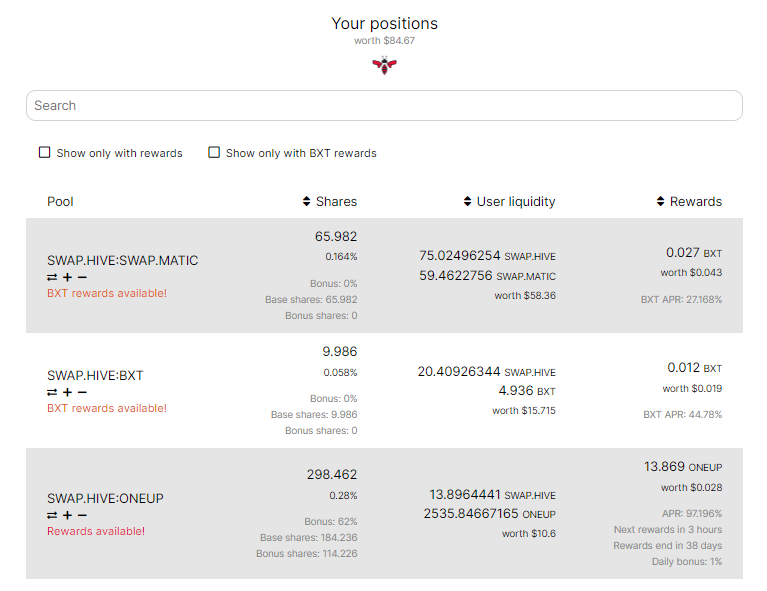 THANK YOU FOR READING!

Congratulations @dubble! You have completed the following achievement on the Hive blockchain and have been rewarded with new badge(s):

Looks like you had another good week there - a 60HP increase is nice. Thats also a nice weekly gain on oneup ! Its really hard to call where the price of HIVE will go, I've been selling HBD whenever I get it, but who knows if it will go back down to 30 again. I had some more tonight and I placed sells for it at 0.38 and another at 0.36 - so we'll see what happens. All the best with it !
!PGM

Thank you my friend! It's great to see your posts doing so well also, inspiring me to try venture out of just gaming content finally

That's a good point, I should really just bite the bullet and do the trade up at least I wouldn't have to think about it anymore, been a long few weeks just holding it out of savings 😂 All the best for you too my friend have a great one!
!LOL
!PGM


My friend Phillip had his lip removed last week
now we just call him Phil.
Credit: reddit
@hoosie, I sent you an $LOLZ on behalf of @dubble
Did you know that $LOLZ is a Dividend Token too? Find out more at LOLZ Defi.
(5/10)
0
0
0.000
Reply

And you - good luck whatever you do ! Cheers !
!PGM

Thank you so much! Have a great one!
!LOLZ
!PGM
!LUV


Scientists just discovered a cow-like plant.
They’re calling it a BO-VINE.
Credit: reddit
@steem82868, I sent you an $LOLZ on behalf of @dubble
Use the !LOL or !LOLZ command to share a joke and an $LOLZ
(6/10)
0
0
0.000
Reply
Menu
Explore NFTs Proposals Pool
Trade
Trade SPT