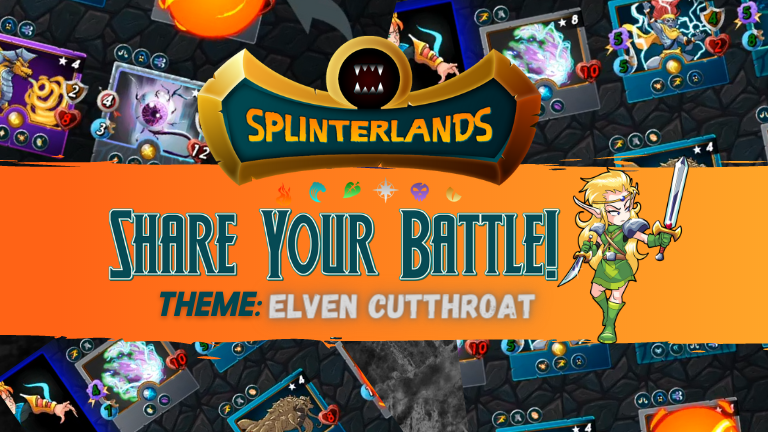 This week we’re covering Elven Cutthroat, a common neutral monster, with low mana, meaning that it can fit easily in most teams. This is one of my favorite monsters to use from the base deck, especially combined with a Life deck. This is because of its ability: Sneak.

This ability allows the user to attack the last monster on the enemy team, meaning that a melee monster like Elven Cutthroat can attack even if it isn’t in the first position. This is particularly useful because, often times, the monsters in the backline have less hit points, so they can be defeated quickly.

Apart from that, it stands out since it is one of the cards from the base deck, meaning that you have access to this card right after you start playing! Besides that, it has an amazing speed when leveled up, and 3 melee damage at max level.

For this battle, I decided to have a Sneak centric strategy, using 3 monsters with this ability to defeat the backline first.

My 3 monsters with Sneak were able to defeat the Herbalist (the last monster on the enemy team) in the first round. And thanks to Lorna Shine, the attack from the enemy Feral Spirit gets nullified. Thanks to the Protect from the Defender of Truth, my Elven Cutthroat survived another attack from the enemy Feral Spirit. And once again, Uraeus, Feral Spirit and Elven Cutthorat defeated the last monster on the enemy team. My Sneak monster defeated the last monster on the enemy team, while the Defender of Truth took out the enemy's tank. With all my monsters still standing, they defeated easily the remaining one from the enemy team, especially since it couldn't attack back. My strategy worked on this battle, since I won without even a single monster from my team dying! And the Elven Cutthroat is a really fun card to use, especially with low mana caps; and since it's part of the base set, you can use it at level 1 even if you don't own it.

This is my first time doing a Weekly Battle Challenge, even though I've known of them for a long time, and it was fun writing this analysis. In the future, I hope we get Weekly Battle Challenges of other monsters that I'm no familiar with, since, for me, the fun of this game is in renting, experimenting and coming up with new strategies every time.

Finally, I hope you enjoyed my review of the Elven Cutthroat, and see you next week on the next Challenge!

Hello, @ginnungagap! This is @jcrodriguez from @OCD team.

We saw that you already posted your first post here in Hive! Congratulations and welcome!

I also play splinterlands. Welcome to the best platform and the best game on this blockchain. Maybe we will cross paths in a tournament or clan battle. It is your first post. It is important that you make an introduction to the community, is my suggestion.

As a sample of what an intro post is, you can refer to this intro post for reference:

Congratulations @ginnungagap! You have completed the following achievement on the Hive blockchain and have been rewarded with new badge(s) :