In my favorite Battle Of The Day today I learned that sometimes you need to be very, very patient in Splinterlands battles.

As the match started I saw that my opponent had fielded 3 Level 3 Legendary monsters and with both sides sending multiple magic users into arena, I expected this to be a short but exciting match. But as all the debuffs unfolded, suddenly both teams where extremely weakened. In fact only a few points of damage occurred to each team in the whole round! 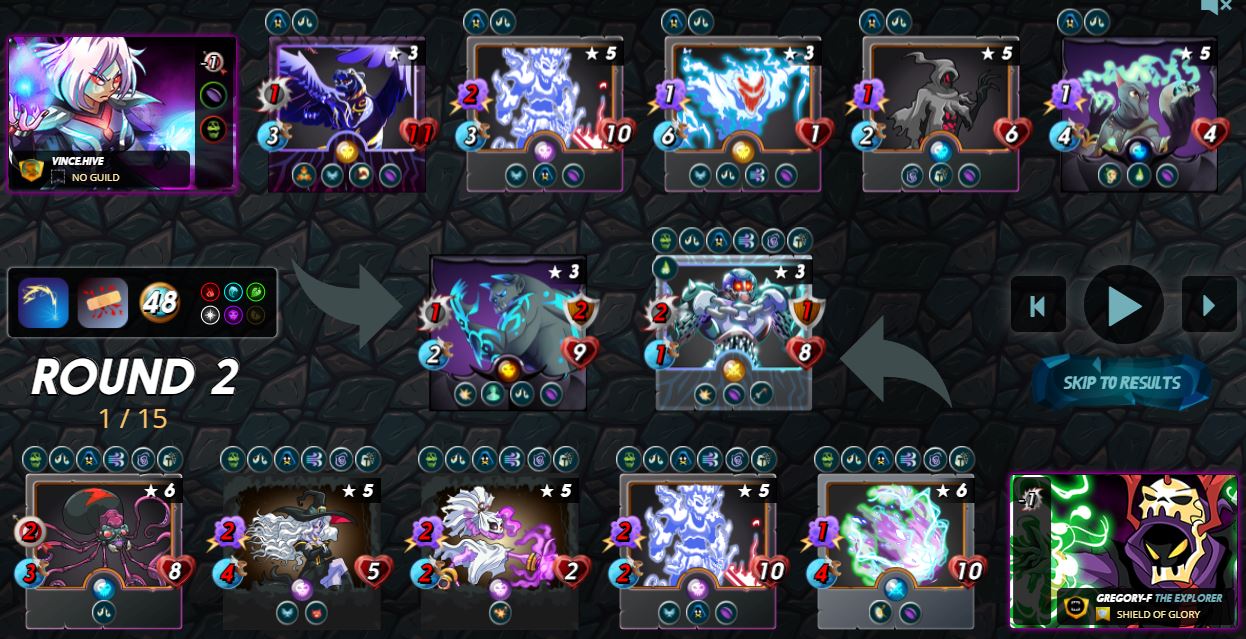 With the start of Round 2, I saw that the Poison on my Chain Golem was the most damaging attack each round. Meanwhile I was only able to do 4 points of damage to my opponents Dark Ha'on each round. This was going to take some time. 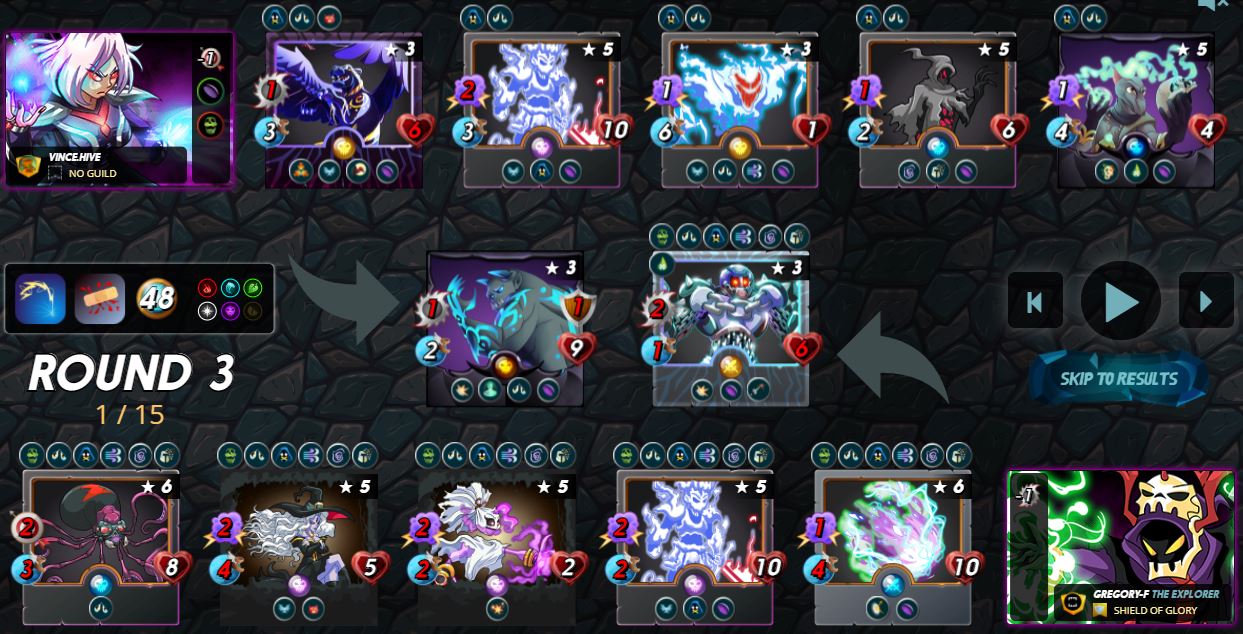 When Round 3 got underway I got a really good feel for how slow this match was going to unfold. 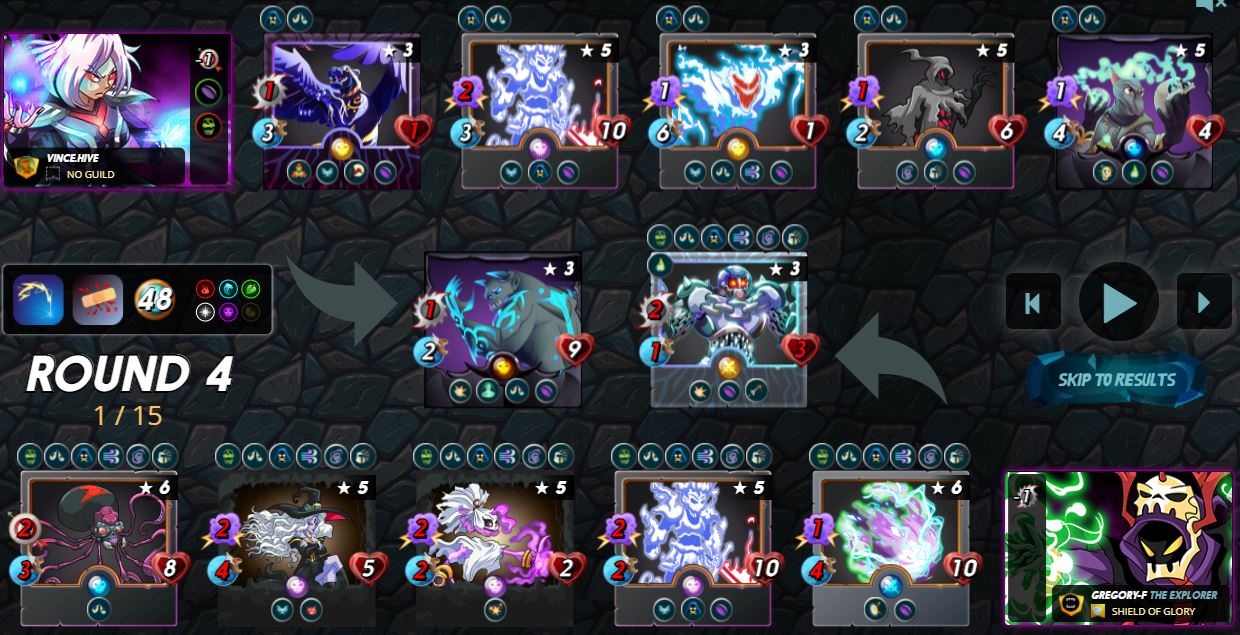 Round 4 started and neither team had suffered their first casualty. 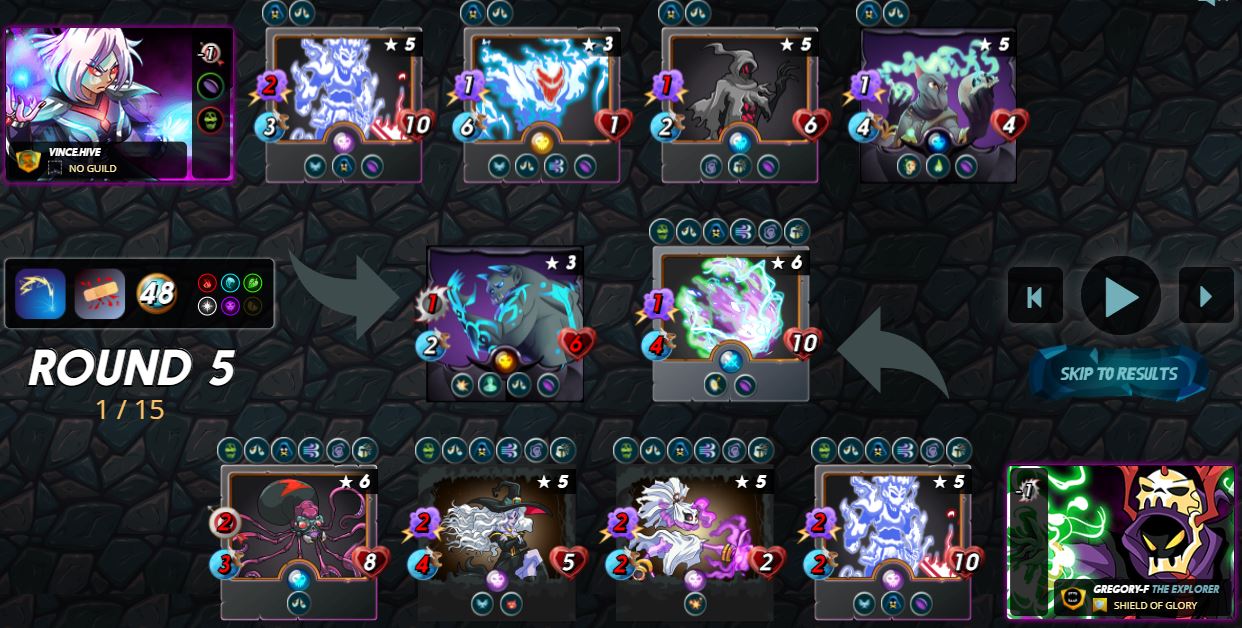 As Round 5 started, I was concerned that Poison of the Venari Bonesmith might be the deciding factor in the match. If he could inflict each of my monsters in turn with poison, I might end up losing the match. 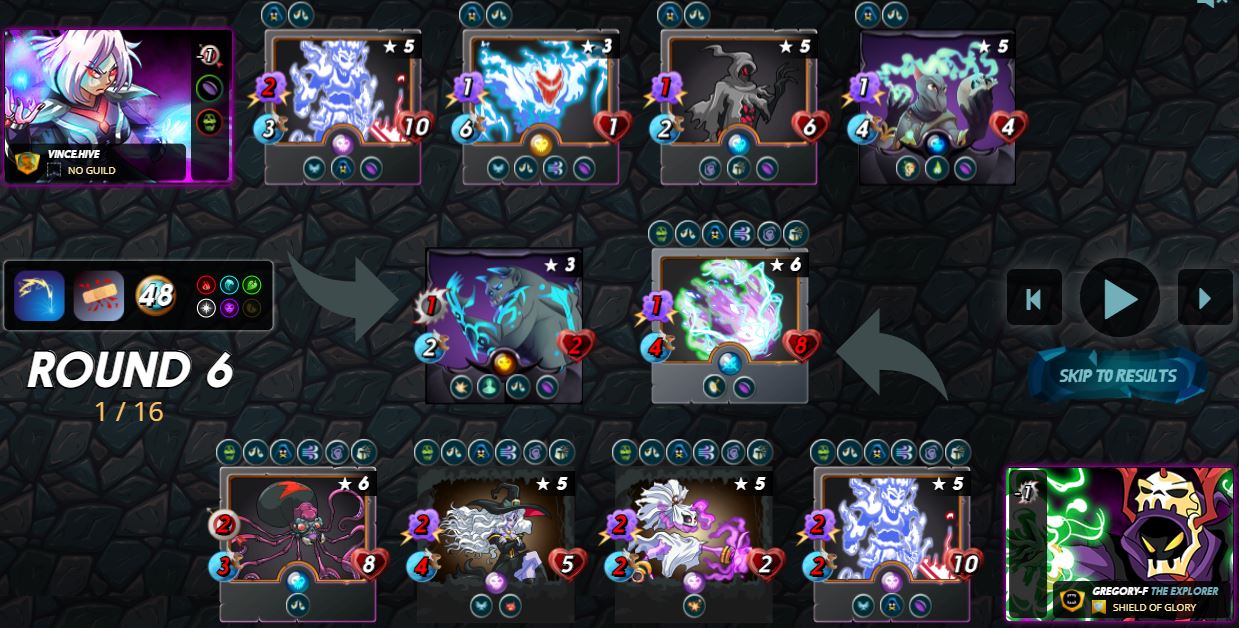 Round 6 got underway and my Prismatic Energy had not been Poisoned yet. 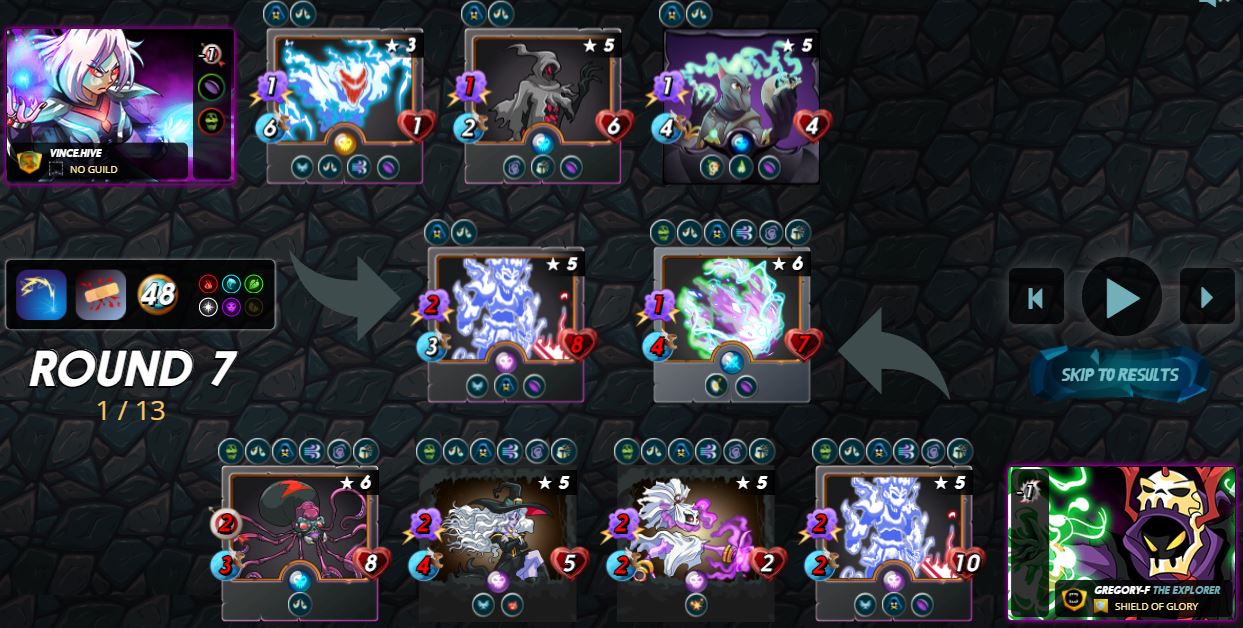 After 3 rounds, I finally took out Harklaw. My luck was still holding, my Prismatic Energy was Poison free. 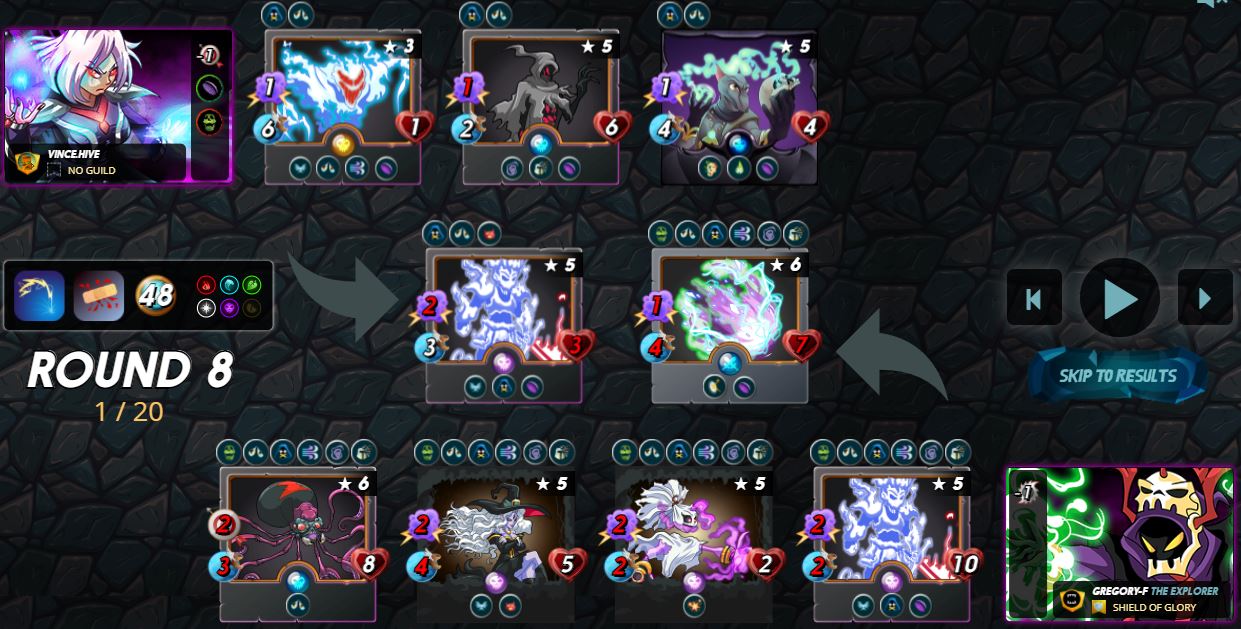 Finally in Round 8 I took out the opponents Phantom Soldier and got my magic damage back to normal. Now it was a completely different match. I quickly killed the Fallen Specter next. 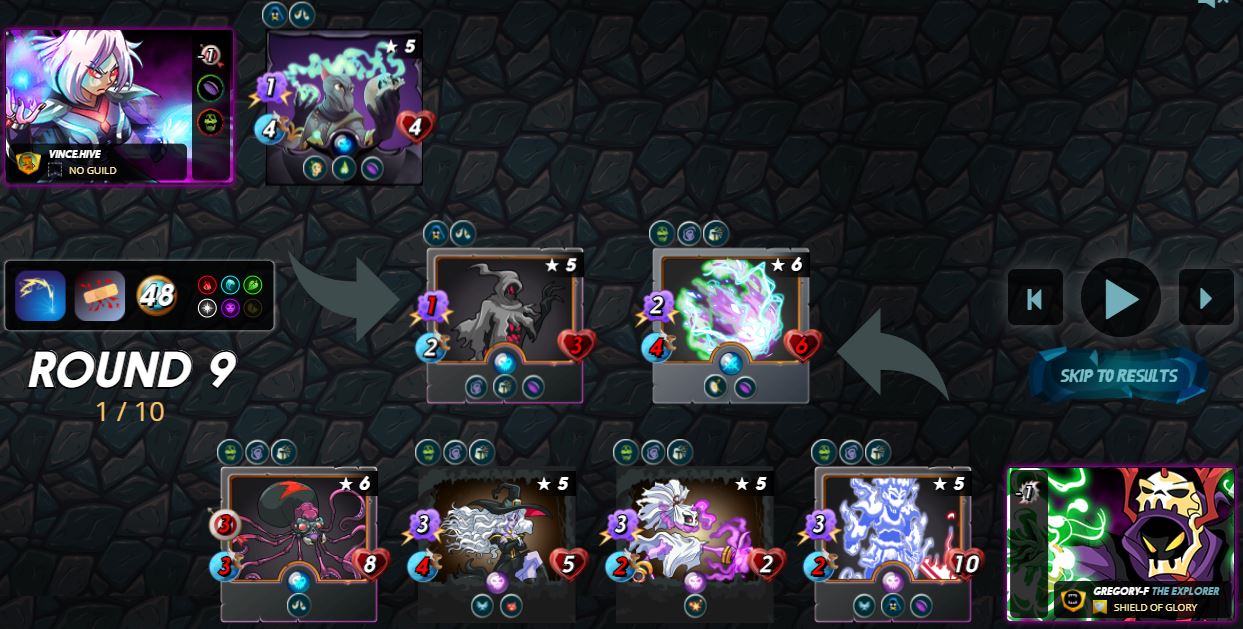 By the start of Round 9, I was in full control of the arena. A few more attacks and my opponent was finished.

I love using Magic... and so Mimosa has been such a massive thorn in my side for the last couple of seasons. She is super hard to counter, so you've done an incredible job in this game. Good win!

I usually have a hard time with her also. The high mana cap allowed me to throw more at her to wear down her monsters.

Oh and thanks for your support, I !LUV it.

Congratulations @gregory-f! You have completed the following achievement on the Hive blockchain and have been rewarded with new badge(s) :

That was very good tactical attack against your opponents and that battle on going so far round nine, great victory.

Thanks, I !LUV you visiting and commenting so often on my blog.

Finally in Round 8 I took out the opponents Phantom Soldier and got my magic damage back to normal.

that really was a game changer. at times beating one monster is harder than beating the rest of the team.
Nice job.

Yeah, that one monster was crippling 4 of my monster's attacks. Taking him out made a world of difference in the battle.

I !LUV and appreciate your continued support.

Nicely done, Death is my favorite Splinter and besides a maxed Daria is the only Splinter I have a maxed summoner in.

Death has always been one of my favorite splinters. In fact you might say it was my first Splinterlands !LUV. But I got sidetracked building up the other splinters and neglected to get a few of the cards I needed to have a competitive Death Splinter deck. I think once the Chaos Legion chaos settles down I'm going to work on fixing that.

My first !LUV was the Fire splinter, but I've been caught sneaking around with all of them, !BRO

A week or two ago I was having a !BEER and some !PIZZA with my boy Frost Giant and the love of my life Naga Assassin and I can't even tell you how freaky things got! It just wouldn't be decent...

I can already see the nightmares forming in my head tonight.... !LUV the honesty though.

Lol! Have another !BEER !BRO and you'll feel better in the morning.

When I hit diamond league I always was surprised by amount of debuffs when playing against death splinter :D Then I ask myself what I am doing here xD

LOL! I know the feeling!

What a fantastic battle.