@konaqua 63
about 2 months ago
Ladies of Hive

One of the monsters that can only be obtained in previous airdrops. When you buy a certain amount of Chaos Legion pack, you will be entitled to get a free copy of Doctor Blight. This makes him very expensive as he is very limited. The other way you can get Doctor Blight is by buying from other players but this can be more expensive than getting him in the airdrop.

Also, this is unrelated but does anyone else think that Doctor Blight look like Doctor Giovanni from Fire Force? 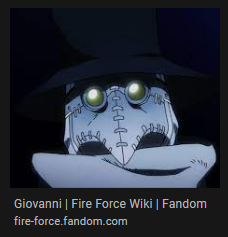 To say the faculty at Pelcroft were uncooperative when first presented with Alastair's “evidence” would be an understatement. Shunned for his obsession with obscure folklore and laughed at for his insistence on a forgotten “hidden” continent, staff and friends alike mumbled pejoratives just out of earshot suggesting an unbalanced mind, drawing comparisons to the infirmed at Silverwood Asylum.

But the Yerivin Manuscript could not be ignored. Though indecipherable, the illuminated volume hinted at lands and flora somehow lost, suggesting a rich landscape ever so near but inaccessible to the uninitiated. As his critics grew more vocal he grew ever more determined, reclusive and choleric, buying the artifacts he could and stealing what he could not to fuel his obsessive research; obscure tablets in jade, strange figures carved in hardwoods unknown, and fragments of rotting velum in writing nearly identical the Yerivin volume. But still they would not believe.

Everything changed when the first sightings were made. The seas themselves had suddenly shifted, alien currents with strange fish had interrupted trade routes and samples described in university articles gave at last incontrovertible evidence for Alastair's claims. Though gifted now with funding, celebrity and a clockwork steamer to make the voyage, his sleep became restless, haunted by whispers of fear and greed.

On the sea he grew thin, unable to eat, feeding instead on his growing delusions, disappearing from the shore camp on arrival, returning late that first night wild-eyed, raving of ruins in the jungle and of visions of a flaming caldera where all questions would be answered. The crew muttered. The ship's captain hid the guns and rum.

The next morning he was gone. It was a fortnight before reports reached the shore of great swaths of jungle blackened and dead with tales of a crow beaked shadow bringing death in its wake.
“From the starless void beneath and from before creation lives the dweller in the void. By Silus' will was it given form and through the tearing of the veil were the hands of chaos laid upon the world. Though the Crypteia are the heralds of Chaos, only I am the right hand of doom. By the well of power am I given strength. Through me the shadow of the void is cast and by the will of Uul the word of Silus is given voice. Hear me and tremble. Approach and embrace oblivion.”

-- Doctor Blight, The Children of Doom 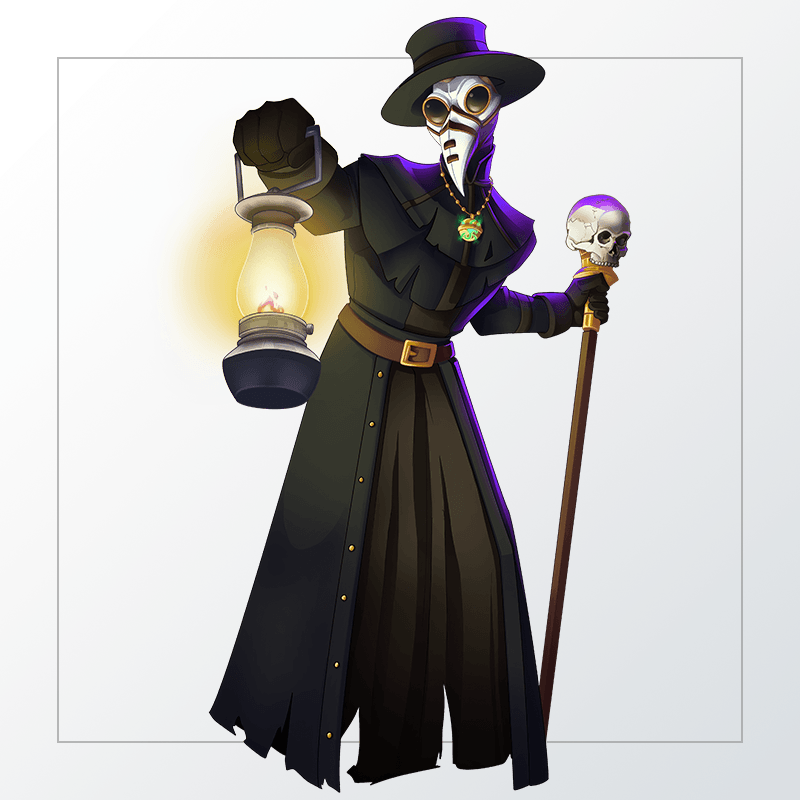 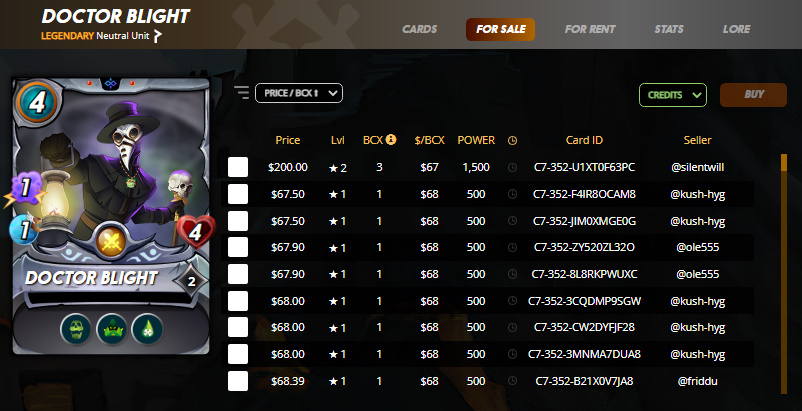 Since Doctor Blight is a limited monster received only from the airdrop and not the packs, his price is kind of up there. The cheapest on the market right now is at $67.50. There's a level 2 for $200 which is around $2 cheaper than buying three level 1s.

With these prices, I would suggest renting it instead because the level 1 doesn't seem to be really useful. Doctor Blight pop off at level 2 so you might want to get him to level 2 in order to feel his strength. 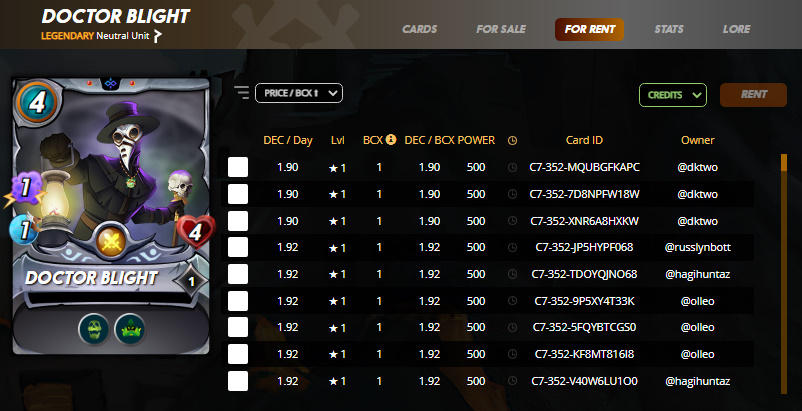 Unlike the high price of purchasing one, renting one is quite affordable. At 1.90 DEC per day, you can get a level 1. However, like I said, you might want to have him at level 2 before using Doctor Blight.

The cheapest rental price I've seen for a level 2 is 22.43 DEC per day. Yes, it's a bit high but DEC price being around $1 per 2000 DEC, a 22.43 rental is just pocket change and this would most likely give you lots of wins with his poison ability. 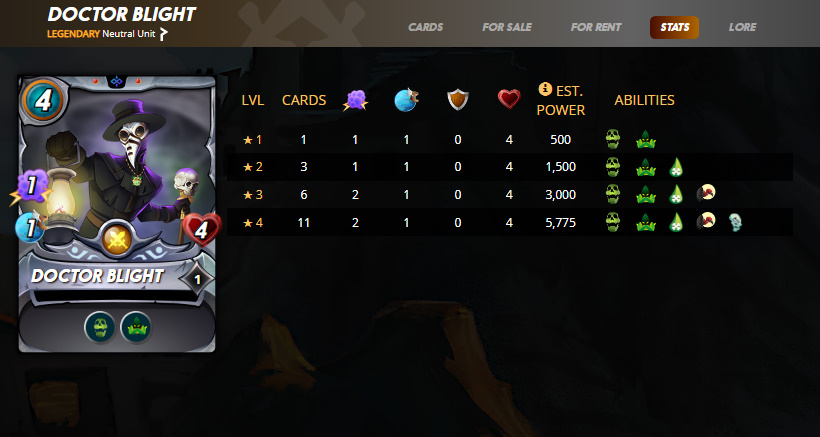 Doctor Blight's stats are good. He only has 4 mana cost so the stats are on the low side. However, his main purpose is to inflict negative status on the opponent so it doesn't really matter.

At level 1, Affliction and Camouflage are unlocked. Monster with affliction has the chance of inflicting a Affliction status to the opponent hit by attack. Monsters with Affliction status cannot be affected by any types of heal. This is a strong ability since most of the time, the tank is supported by heals and tank heals allowing him to survive until the end. This underrated ability removes that strategy.

Camouflage allows the monster to not be able to target by any attack unless it's in the first position. This allows your Doctor Blight to survive until the very end without any kind of support. This is an excellent ability for low health monsters allowing you to have them the survivability that they need all throughout the game.

At level 2, Poison is unlocked. Like Affliction, monster with Poison ability has a chance of inflicting Poison to the target it hits. Monsters affected by poison takes 2 damage per round until they die or gets removed by cleanse ability.

At level 3, Scavenger is unlocked. Monsters with Scavenger ability gains 1 max health whenever a monster from either side dies. Thi means he can get a maximum of 11 health in 1 game. Combining Scavenger and Camouflage allows Doctor Blight to get the highest result possible before he gets to the front, removing Camouflage, and being targeted by attacks. Make sure to place Doctor Blight at the very last position to get the full effect.

At level 4, Weaken is unlocked. Weaken reduces all opponent's monster by 1 as long as the monster with the Weaken ability is on the board. Like the logic with Scavenger, since Doctor Blight has Camouflage, it ensures him to be the last monster surviving making your weaken ability abused in full.

15 Mana Cap. The total mana cost for all monsters must not exceed 15. It is advantage to use low mana cost monsters and swarm over your opponent than use big monsters that might struggle dealing with multiple foes.

Heavy Hitters. All monsters do double damage to stunned enemies. While double damage sounds appealing, stunning an enemy is hard because of the limitations of the ability. Also, not all monsters have the stun ability. In this battle, there's no stun ability available making this Rule of Combat as same as Standard Rules.

Limited to Water, Earth, Life and Dragon elements. You may choose any of the four elements as your starter but not Fire and Death elements. I kind of struggled in this game because my normal go to is Fire element for low mana matches.

Gained effect due to Heavy Hitters

Do you like DOCTOR BLIGHT? Why or Why not?

Yes, I like Doctor Blight. The only negative thing about him is that he's expensive due to him being a promo card instead of dropped via packs. However, for those who got him from the airdrop, the higher you level him up, the stronger he becomes because all of the abilities unlocked after level 1 is very coherent with Camouflage. I don't think Doctor Blight is as useful in level 1 but if you unlocked his level 2, I think you're in for a treat.

Yes. I almost lost the battle but my use of magic damage allows my team to take the least Thorns damage from Venari Knifer. Because of this, I had quite a number of health left with my monsters to take down my opponent's monsters.

I would like to change Failed Summoner and/or Hill Giant but I don't have any good 2, 3 or 5 mana cost monster that can act as a tank. I would say Stone Golem or Peaceful Giant is both decent choices and I might get myself a copy of those for the future.