My efforts and thoughts through Chaos Legion sale and some gold cards revealed!

The sale of Chaos Legion packs is finally coming to an end, for me personally. However, the sale in general will probably last a couple of weeks! I will grab some packs every now and then and maybe use my SPS airdrops for buying out more. But again, SPS could turn out to be something irreplaceable later in the game development, so might be stupid to spend it on credits. Ok, on to my efforts. So far, I managed to buy 1535 packs which was way more than I thought initially. Yes @belemo the goal of buying 1000 packs is crushed!

Lately I did a lot of thinking around investing in Splinterlands and since I am on the platform almost 2 hours a day, I have learned that the game presents some opportunities. Some of the opportunities are that packs and cards will most likely rise in price just by taking time into consideration (especially gold foil cards). Another point is that we have not seen the potential of the chaos legion cards yet, but we know that they will have some new functions during the development in 2022 (when land/plot is introduced as a mechanic to the game). Also, SPS will work better with the land implementation so that is going to be interesting to follow. Point being, all these thoughts came to me during the presale, and I figured what the heck? If we base most of our investments on the game mechanics and Splinterlands history the return will show up to be quite lucrative. I mean, if the Chaos Legion packs where to be worth as much as the Untamed edition a year from now, holding 1000 packs would be a great investment (Untamed have risen 2000% for the last year).

At the same time, I think I will open somewhere between 500-1000 packs because I really want to reach Gold 1 for this time and try Diamond 1 before 2022 ends. This solely depends on how the reward system will be in the future though. I read somewhere in a Splinterland post that they would incentivize people to climb leagues. They have not told us what they want to incentivize yet, but I can’t figure something else than improving the rewards/prices of winning battles etc. If the latter where to happen we could see some improvements of the Splinterlands tokens and NFTs. In conclusion my pack openings will depend on how the rewarding system will turn out to be in 2022.

My floor will however be to hold 500 packs. As many of us know Splinterlands is still in the early chapters and who knows how it could turn out to be within five years? When adoption reach its fullest potential, you would want to be invested in Splinterlands!

Below a screenshot of my purchases thus far, my efforts might end around 2000 packs (if the sale continues for some weeks).

How will I acquire the rest of the packs? Renting cards for DEC and then convert DEC to credits. I will most likely use some SPS as well. It sucks that the price is hovering around 0.15 cent though. But come on! it’s for free! I will not complain!

Another exciting mechanic to Splinterlands sale is that you are eligible for “airdrop cards”! For every 350 packs bought you will be guaranteed a card from the airdrop. I bought 1535 packs thus far, and then I am guaranteed 4 of each on the next three reveals. I do not know how many packs you need to buy to be guaranteed the last 8 airdrop cards, but I assume it is something in the same range. However, let’s break it down so far:

I hope 350 packs will be the bottom line, but if it continues like the above the 13th and 14th airdropped card would need to be around 500-600 packs bought before they are guaranteed to drop. I think I am fine, 2000 packs bought will hopefully take me all the way!

The airdrop cards are to be taken seriously, just look at the cards that was airdropped from the untamed edition below: These cards are one of the most expensive regular cards in game these days!

For instance, Lama and Yodin. Those cards are insane good in gameplay and will most likely take you to 2000 rating. They do not come cheap on the marketplace, last time I checked Lama went for 600 dollars and Yodin for 700 dollars! Let’s see how our airdrops will be like - I don’t think all of them are going to be legendary but hoping for a summoner or two. We have not seen any summoner airdropped yet. This will come, hoping for something like Lama or Yodin, lol!

Over to some of my new cards I acquired yesterday. Lord, oh my god, out of the 200 packs I opened I got River Hellondale x2, Djinn Muirat, Ifrit Rising and Corpse Fiend! But not in regular edition, in frigin GOLD EDITION! I can’t believe my luck! That is 5 gold legendary cards from 200 packs, now that is what I call luck! I also got 10 epic golds! My investment got break even from here and beyond the moon, haha! And the cards? They are the best from two worlds; very good playing cards and will yield me some great numbers in the future - both in terms of gameplay and rentals.

Beneath, some eye candy and are the best cards I have gotten thus far. Now that I see the potential of the packs its hard to resist the temptation of opening more packs. I will stick to my strategy though, and do not open them unless something wonderful is happening to the mechanics of the game. 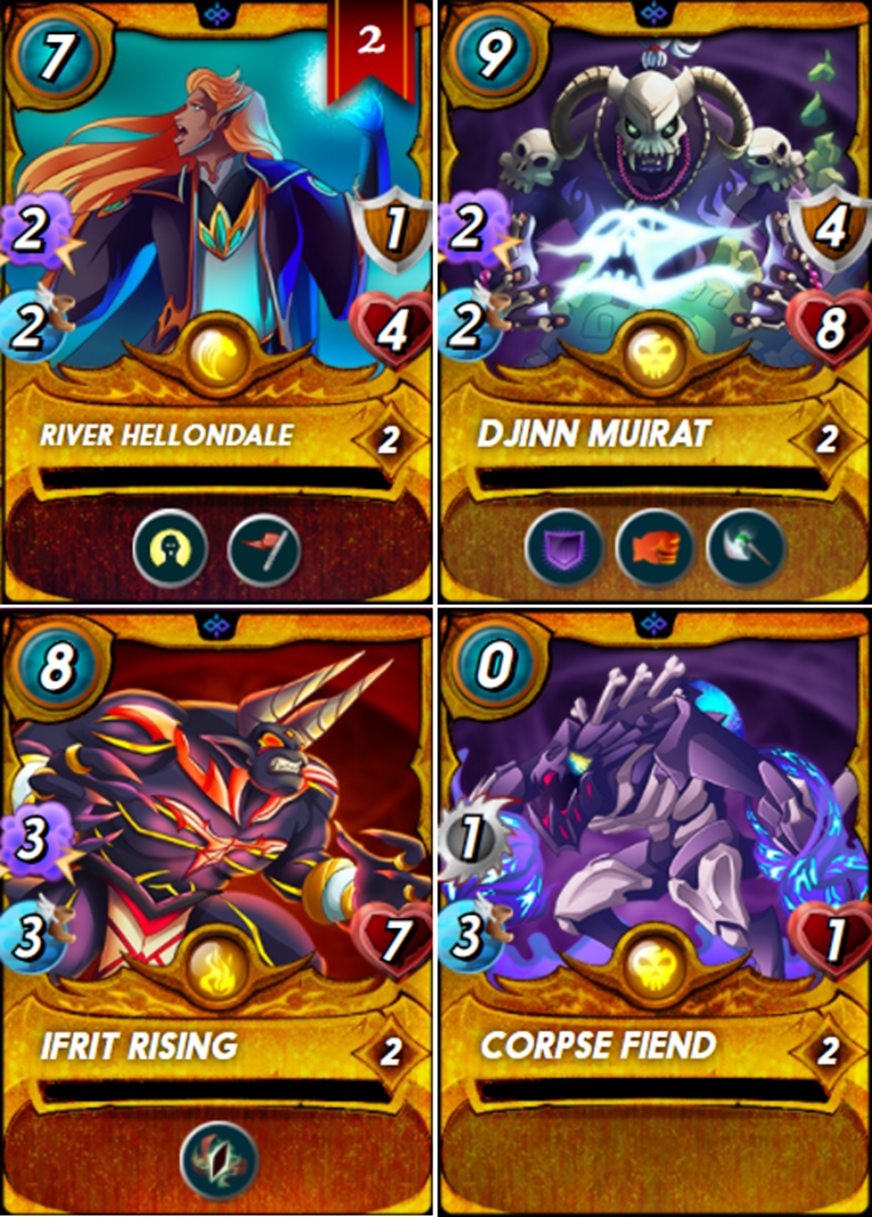 Have a nice evening and go hard on your pack purchases or else you will have no chance in defeating the bull (Olebulls) in the ranked battles! 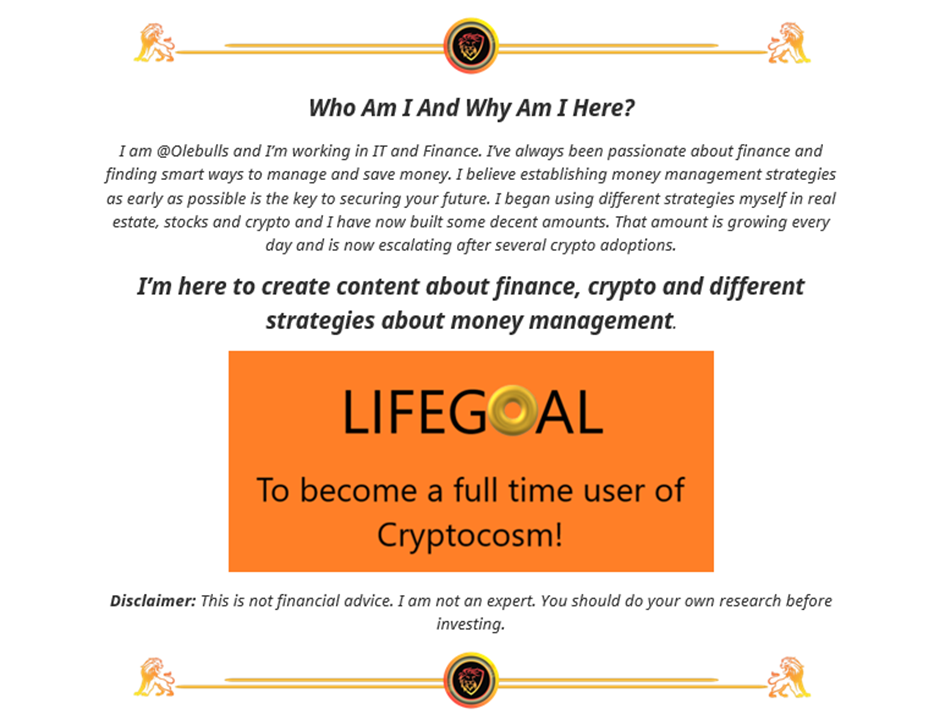 No way. These are incredible pulls, I would've just retire ever opening packs from there on not to ruin that conversion rate haha.

Wow. Bro. I'm wondering what make you decide to dump such big money on it although the gain is obviously after you opened those packs.

And now what I'm struggling is whether I should out of my pocket to invest so many in this game where I'm so new on investing in crypto and NFTs.

Appreciate for any suggestions.