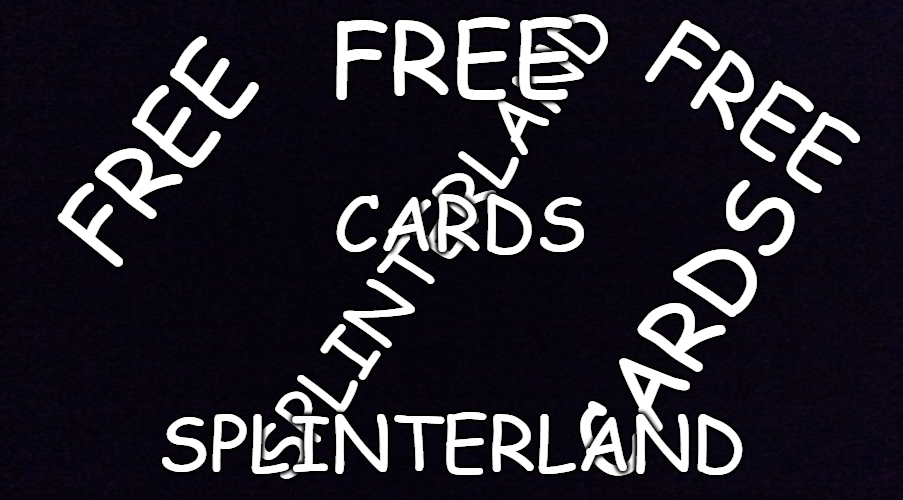 Its been awhile since I had a straight up card giveaway so today I rectify that oversight of mine. Like all my giveaways and contest entry will be a painless process. But before I do that a quick word from our Sponsor (Me:Rentmoney).

Now that we got that advertisement out of the way lets move on to the good stuff. (Its Giveaway Time) With the amount of participants these giveaways usually get it doesn't feel right to giveaway just one Splinterlands card so I decided why not giveaway three. One Rare and two common Splinterland cards will be up for grabs here today. All one needs to do to enter this giveaway is follow the instructions below.

How A Winner Is Chosen

The timing of your comment will act as your raffle ticket number. After this giveaway post reaches post payout (Seven Days) I will use a random generator to select a winner. The entry in which the random generator picks will be the winner and will get sent a RARE Splinterlands card. The two HIVENS in which the winner tagged will get a common card each (Don't tag your alt accounts). 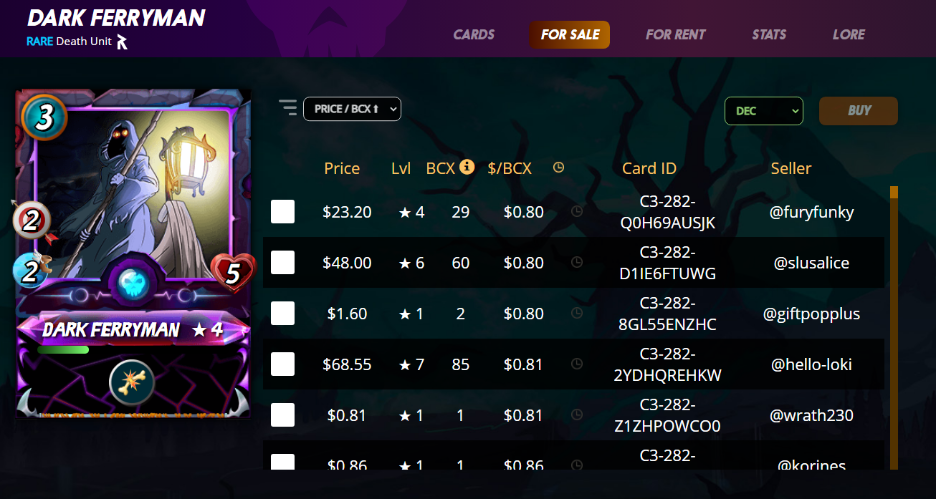 Death Splinter has always been my favorite Splinter and I am a sucker for low mana cost cards. Dark FerryMan checks both those boxes. For just a three mana cost this card will help you crush your enemies in battle. At Level one it sports a two arrow attack and five health with a speed of two. It has the ability known as cripple (Each time an enemy is hit by a Monster with cripple it loses one max health).

The Dark Ferrymen of Mortis are well-known throughout the Splinterlands, for they carry on their ferries not only Dark Eternals, but the living as well. Ships are not able to approach the rocky shores of Mortis except at the port of Galzur, so ferries must take all passengers from boat to shore, even those of the living who simply wish to visit Beluroc. Those who have made the trip many times always advise first-time travelers to not look into the soothing and hypnotic eyes of the Ferrymen. It is tempting to do so, and great secrets can be learned, but in this case, there is a fine line between knowledge and madness. It is also known that the Ferrymen do not answer to the Lord of Darkness, and that they have powerful and strange skills of combat that are put to excellent use when they are summoned to tournament battle. *Lore taken from Splinterlands site.

Readers: "Awesome but which Common Card?" 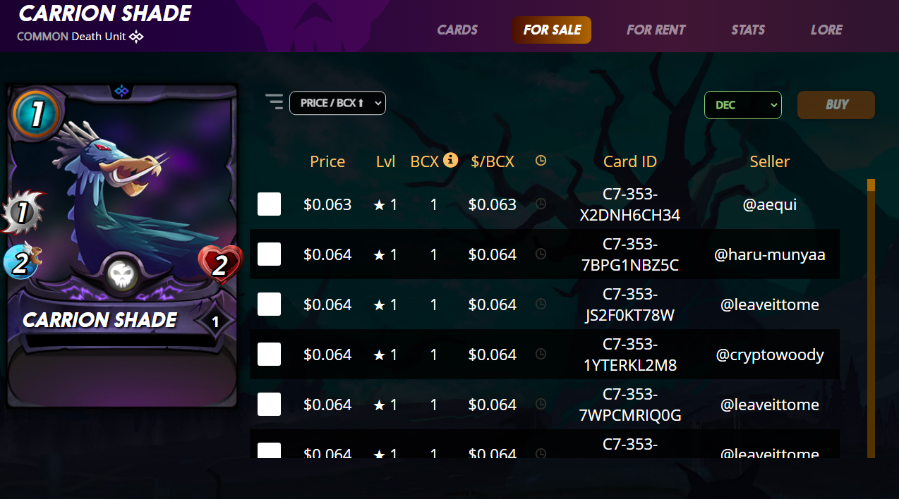 Keeping to the Death Splinter and choosing another Low Mana cost Monsters the common of choice for this giveaway is Carrion Shade. It has a mele attack of one / Speed of two and a health of two. It doesn't have any abilities at Level one but with a mana cost of just one we don't expect it to. Its always great to have one of these handy to fill in those one mana gaps that our team choices sometimes leave us with.

A drizzle cast the forest road in shades of gray. The forest itself gave off a mournful, lonely atmosphere. The trees bowed in the silence and stillness. And it was only broken by the fluttering of wings.

A group of carrion shades surrounded a humanoid body. A person left on the side of the road, their belongings taken and stab wounds across their body. Any passerby would have known it was a deal gone wrong.

But under the watch of the forest, it was only a scene of the circle of life. One body feeding others. The dark feathers of the carrion crows blocked out the corpse as they enjoyed their meal. Lore taken from the official Splinterlands site.

Splinterlands is a digital card game created by @aggroed and @yabapmatt that utilizes NFT's for game play. These NFT's and other in game rewards have real monetary value. You can get started with investing in or playing Splinterlands by clicking here.

To Watch A Splinterlands Battle I want to participate and I tag @rufans and @adedayoolumide

I want to join, invite @atnazo and @ecto1337 for giveaway

Thanks for invite @bokica80 and of course I want take part ;)
I want invite @captainquack22 and @cryptoyzzy for this giveaway!

Thanks for tagging me.

Thanks @jfang003 . I too would like to participate. Tagging @pix21 and @tedus

@gameboyali and @shawnmichael-gt get yourselves a chance at free loot!

I don't really have friends here yet. But enjoyed the streams of @clove71 and @groovy828, so I'll just tag them :)
Thanks for hosting!
Ign: stekene

I know @sheikh27 and @moonthumb are fans of Splinterlands giveaways. I bet they would like to win these cards.

lolztoken.com
What would happen if giant ducks roam the land?
Earthquacks
@rentmoney, I sent you an $LOLZ on behalf of @amaillo
Use the !LOL or !LOLZ command to share a joke and an $LOLZ. (3/4)
0
0
0.000
Reply

I'd like to join by tagging @kyo-gaming and @petrikeil
!PIZZA

I would love to participate! I think that @chaosmagic23 and @luthien12 would also love to win one of those cards!

Thanks for having the giveaway!

Thanks for mentioning me @andy-plays 🙏
IGN: @chaos23

I'm sure @studio3141 and @cyberdexter would like to win a card too!
Good luck!
!gif good luck

Thanks for the mention @chaosmagic23