Manual curation versus a @monster-curator delegation for my SPT?

I've been stacking SPT for a while now, I quite like it over on Splintertalk.io - I think the blog format works really well for a subject as specific as Splinterlands.

And of course SPT qualifies for the SPS airdrop! I'm almost at a million, almost.

I usually drop by the platform once a day to do a trawl through and drop a few upvotes on posts with my alt account @revise.spt - I quite enjoy it - it's become part of my daily routine, and from a Finance perspective I do a pretty good job of maxing out my curation returns, I'm good with keeping that VP bar around 85%! 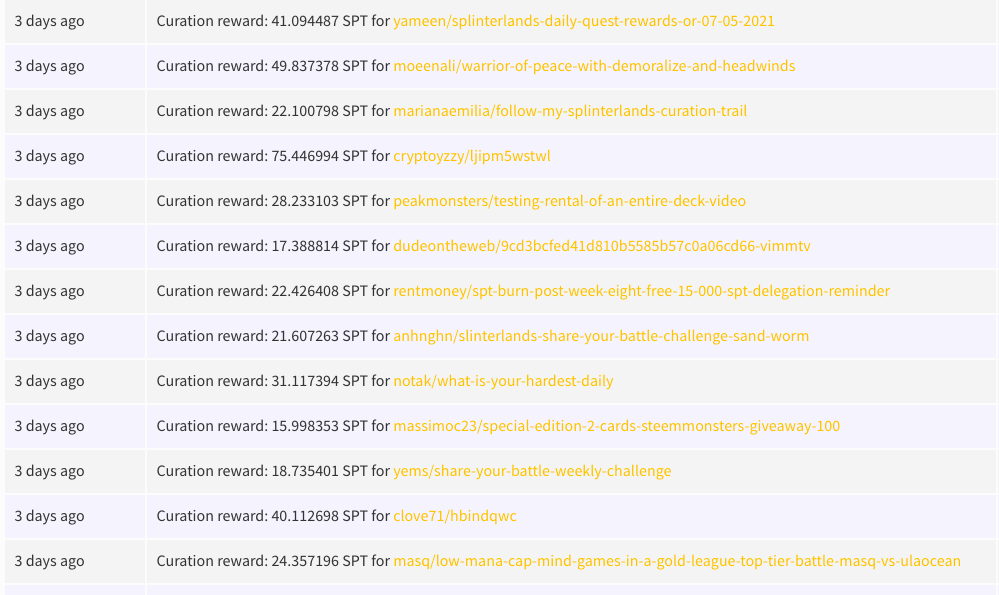 However I am also aware that delegating to @monster-curator is an option with a decent return too, so I tried out a little delegation of the same amount to see what the returns are like there, possibly slightly better:

(My active stake is low as I've been unstaking my entire STAKE from my alt and sending it back to my main account (where I play Splinterlands) so as to qualify for the SPS airdrop and left some liquid so as to have the same stake on @revise.spt and delegated to @monster-curator, and I've only got a couple of days' data as I've since jiggled everything again!)

I know that @monster-curator only votes the very best content, but I personally quite like being in control of my own stake - and there's ALWAYS enough stuff on SPT to vote on - with a constant feed of legitimate contest posts - to maintain the curation income.

It's work but in the loosest sense of the word!

Oh and I get to DV the occasional tag abuser too this way, which is something I miss from my Steem Flag Rewards days, oh they were fun!

HOWEVER, it's nice to have @monster-curator around if I ever actually end up getting back to my life offline and don't have the time to curate on multiple front-ends!

I don't have sufficient data to show me the relative returns, and once my stake has settled back down and I'll then delegate a proportion to the curator account and then work out my relative returns manually curating.

I've only got 3K tokens but I've staked them to @monster-curator following your enthusiasm. 😂

I don't manually curate SPT. I just get rewards when it's used as a secondary tag. The amount is so small it probably doesn't make much difference what I do with them. 😁

The amount you can earn is tiny, but SPT now has a use case for at least another year - SPS airdrop - so that's another token, and 50% curation return (ish)

And it's one of the most enjoyable ways to earn - no DRAMA here at all!

no DRAMA here at all!

This is an interesting topic as I know that a lot of people are delegating their SPT tokens to monster-curator, including myself... Usually, I like to do curation myself, but for SPT I have decided to delegate... But, you said interesting info regarding SPS airdrop... So, if I leave my delegation to monster-curator, that doesn't count for the airdrop?

Let's see if others jump to discuss their results about this..

No worries, the devs have assured that all delegated SPT will count for the owners SPS airdrop.

That's awesome news! Thanks for taking the time to answer... ;)

I thought they did count even if delegated, that's usually the way, nice to have it confirmed below!

(My active stake is low as I've been unstaking my entire STAKE from my alt and sending it back to my main account (where I play Splinterlands) so as to qualify for the SPS airdrop.

If I'm not mistaken, all accounts qualify for the airdrop. One just needs Splinterlands assets and their in. To be on the safe side one would need to ask the devs for the correct answer.

Hey @revise.leo, here is a little bit of BEER from @rentmoney for you. Enjoy it!