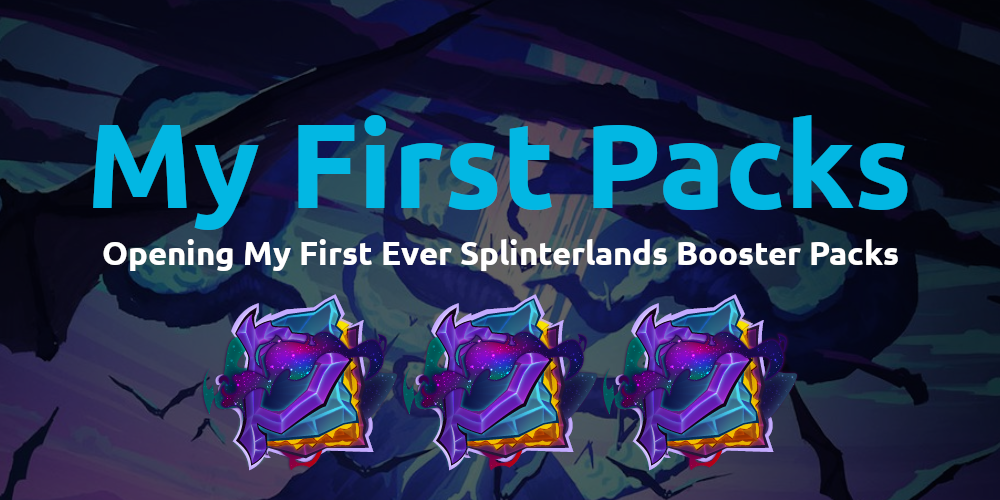 I’ve been involved in Splinterlands since October 2021, basically since I joined Hive. For some of you, this is no time at all and at the same time it’s my entire Hive lifetime.

During this time I haven’t owned, purchased or opened a single Splinterlands Booster Pack. I’ve been eyeing a few on the Hive-Engine, but never pulled the purchase trigger.

Today I changed that, and achieved a small but emotionally significant Splinterlands milestone.

As I’m a little Hive baby bee, I didn’t have access to VOUCHERS in any cheap or efficient way. My staked SPS was way too low to generate any significant amount of VOUCHERS, and VOUCHER prices have been absolutely crazy. So basically VOUCHER-less I was sitting there.

I stumbled on a Hive-Engine token called XCHAOS. This token was aiming to make a huge bulk order of Chaos Legion Booster Packs and then distribute them to the token holders at a 1 XCHAOS to 1 CL Booster Pack ratio.

I believe the token was aiming to make sure that a lot of people could get access to the packs, in case the packs sold out immediately. This turned out to not be the case. In hindsight, buying CL Booster Packs through this token was not necessary. But the token issuer delivered my 3 packs to my account swiftly and in the promised timeframe, so all is great.

Long story short, I have three packs that I’ll open today and wanted to share my drawn cards with you. Let’s get going to the Mana Well!

As the Booster Packs were tokenized and delivered to my Hive Wallet, I first needed to deposit the three pack into the Splinterlands game. This was easily done through the in-game menu reachable from within the Inventory. 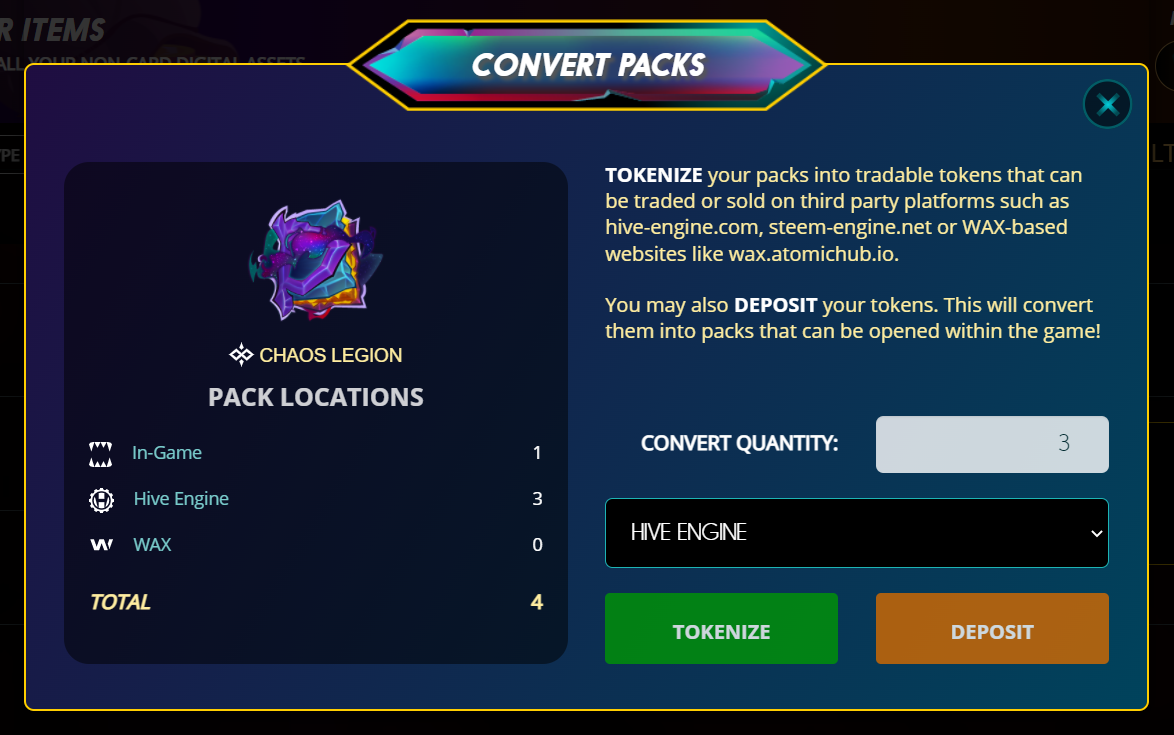 As can be seen in the image above, I have one additional Chais Legion Booster Pack, bought through the official game store. I’ll be keeping this pack, and a few more that I’m buying soon unopened.

With the packs deposited into the game, let’s crack the open!

I opened all the packs in one big pack opening, to there’s no telling which card I got from which pack. I have just divided them Intro three rows as they were presented in that fashion, and dividing the up makes it easier to talk about them.

The first row didn’t yield anything too interesting. Though, I’m trying to max level all the new 1 Mana cards and I got both a Gargoya Scrapper and a Mycelic Morphoid so that’s nice.

The 1 Mana cards are super cheap right now, and having high level 1 Mana filler cards is always a great option to have access to.

The second row gave me a few nice ones. One epic Gem Meteor and one rare Diemonshark. Other than these two, nothing too exciting. I really like the art of the Gem Meteor, though I’ve heard it was nerfed quite a bit from the play testing phase, so we’ll see if I find a use for it.

The third row gave me a chaos agent as well as a radiated scorcher. The more 1 Mana cards that I pull from these packs means less 1 Mana cards that I’ll need to buy. Though it would have been cheaper to pick the up on the marketplace. My third and final rare or above card that I got was the Cursed Windeku. Thorns and a high HP is always fun, though I haven’t had time to test out the new cards that much.

So, despite the 15 Alchemy Potions and the 15 Legendary Potions that were used, Ingot no Legendaries and no Gold Foils. That that’s to be expected, as the chance of pulling such a high value card is very low, even with Potions.

I’m happy with my new cards and the little but welcome addition to my Collection Power.

Did you get anything interesting from your packs?

If you would like to support my work, you could consider supporting me (and yourself at the same time) by including my username in a Hive SBI purchase. Read more about Hive SBI here.

If you’re interested in Hive blockchain gaming, here are some games that I’m having a blast with. You could check them out through my referral links:
Splinterlands
Rising Star