aamirijaz in The City of Neoxian • 9 months ago

This week's theme is to share a battle with the common death monster UNDEAD MINOTAUR. It's a reward card and comes with a melee attack with a double strike and retaliate ability at level 6. 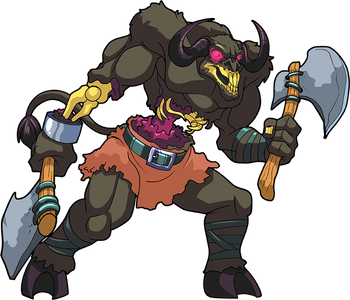 UNDEAD MINOTAUR is a COMMON rarity reward edition monster that lies under the death deck. I like its double strike ability and it also gains retaliate ability at level 6 but I don't like it when it doesn't retaliate at all. Anyways my battle wasn't so impressive but it was undead minotaur which did the winning strike. It was a 44 mana battle with Melee Mayhem rulesets, I'll explain each monster used in the battle below.
So, let's move forward.

In the second place, I used the neutral untamed legendary Cornealus level 2. It also has thorns ability and tank heal too. I used it at 2nd place as it can heal itself if it gets sniped and in case my tank gets killed it can also work as a tank.

The third position was covered with Undead Minotaur. Well, my opponent used a monster with demoralize ability which reduced my melee attack. But still, I managed to win. I could use this monster at last position to counter with sneak ability as my monster would have retaliated.

Next, I used level 6 Octopider, it's a ranged monster with good speed, attack, and health. It has Demoralize ability which reduced my opponent's melee attack by -1.

At fifth place, I went with an EPIC Phantom Soldier, it magic attacked and also silenced the opponent's magic.

Lastly, I used the death sniper Twisted Jester level 3. I wanted to snipe my opponent so its 2nd line can get some damage but my opponent didn't use any ranged or magic at all so my sniper attacked its tank.

Well, my battle wasn't so impressive which could show up this monster's hidden ability or talent. Anyways the last attack was done by this monster and it made me win this battle.

Do you use UNDEAD MINOTAUR often?

Nope. I don't remember when the last time I used this monster, maybe the reason is that there are other alternate options available than this monster.

Yes, this monster takes a little bit to figure out where he's perfectly used. It does happen, he becomes useful. I've seen some battles this week where he's a double-striking beast... and others where he dies (valiantly?) very quickly.