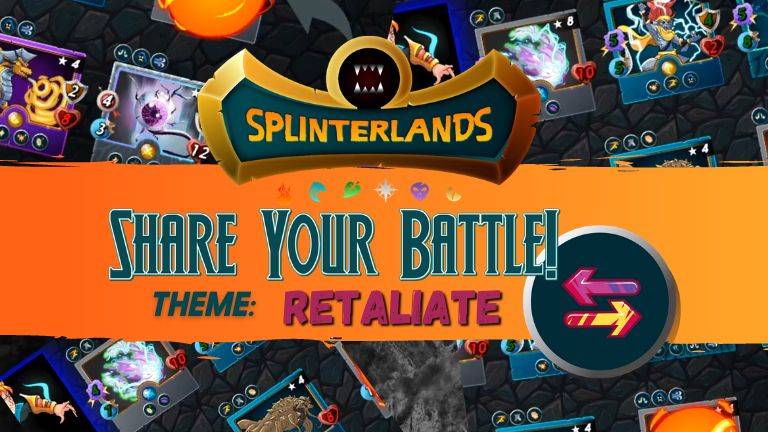 Every week there is a Splinterlands challenge to share a battle using a specific skill and on this week's post it is the Retaliate skill. For this challenge, I plan to use the War Chaang card. I also encourage Splinterlands players to partake in the challenge because you get to try different strategies and earn some crypto in the process. War Chaang is a neutral splinter card. It has retaliate from the start and trample when it reaches level 4. As it has both ranged attack and melee attack, I like it because it becomes far more useful in some of the rule sets such as sneak, opportunity or melee attacks can attack from anywhere. The retaliate skill only has a chance of triggering a counter attack.

As a card, I use it from time to time. I find this card as a good back up tank and it also has a decent amount of health. The only downside I see from it is the fact that retaliate happens to have a 50% chance of triggering. So if you were really unlucky then it is possible for it to just take hits but never trigger the effect.

My current War Chaang is only level 2 so it does not have the trample ability. However it is currently one of the two monsters that I have both ranged and melee attack. The other one is Vigilator and it is also quite a beast in certain rule sets with its double attack skill.

The rule set this time is heavy hitters. This rule set tends to be quite useless since I don't see people use stun cards in my current league (silver and gold). I can use fire, water, earth and dragon cards for this match. With 42 mana, this is plenty and I think I should be able to play War Chaang and build a solid plan for my battle. The summoner I choose to use this time is Yodin Zaku (same as last week). In last week's scavenger battle, I stated that I like this card because of the blast, +1 HP and +1 ranged attack buff.

My plan would be very similar to last week where I will use some good tanky cards and I plan on making full advantage of snipe. The reason why I love using snipe monsters is because it tends to make the most of the blast ability. Another type I could use is opportunity but I just don't see many ranged monsters with that ability. The War Chaang will be placed in the last slot incase the opponent has a physical sneak monster. The retaliate skill does work even with the blast ability. At the first glance of my opponent's lineup, I think I have a good chance. The only concern I have is my opponent's tank (Kraken) and the +1 shield. My blast ability should at least alleviate the extra shield and my snipe can only start attacking after his tank dies. The plan for War Chaang to retaliate on a sneak monster was thrown away since he doesn't have any sneak monsters but he can at least deal some ranged damage. I don't like how the first round played out. The ranged monster took out a chunk of my Living Lava's health. On top of that, I had two cards miss their attacks and I really want that Kraken to die soon. From how things look, I think I will have to rely on my secondary tank Fineas's Rage. At least the Kraken is dead and I am a little less concerned since War Chaang is my last monster. With 10 health and physical attacks, I think it can clean up anything. The two magic monsters seem like the biggest threat to me right now but I am a lot more confident in winning. Both me and my opponent lost two monsters and I was hoping to take out the Captain's Ghost last round. However I did not have enough damage but it did finish off his fire spitter. With my Mantoid at full health, I see zero chance of losing since the opponent doesn't have dodge or flying ability on his remaining monsters. As I expected, I was able to finish off my opponent without any issues. Once that Captain's Ghost died, my opponent would have no way to attack and I believed that I would win even if it went down to fatigue since he had a self-healing unit.

The battle this time around also did not go as I expected. Given the decent arsenal of melee sneak monsters, I thought the opponent would of chosen at least one of them. So in the end War Chaang was relegated to being a damage dealer and backup tank. My snipe monsters did help quite a bit but I felt it was a little bit wasted because of the Kraken.

Yodin Zaku was quite a beast in this fight as it helped quite a bit to reduce my opponent's health. I was able to make use of all three of its buffs and four of my monsters were able to mix in the increased range attack together with the blast ability. I do think I was probably a little too focused on trying to take advantage of ranged monsters with snipe ability and maybe changing around my setup for higher damage ranged monsters might of been a better choice.

Thank you for supporting Holybread and Thunkgaria over the last year! Enjoy your upvote -simplegame

War Chaang is an amazing card, as it not only attacks melee, but also ranged and combining it with your Zaku, it increases its damage even more.

¡Your lineup did a great job!