I have been pretty vocal as a Gamer about disliking the extreme extent Splinterlands currently is a pay2win experience while seeing the potential of it being a fun and challenging Collectible Card game being massive. If anything, the game really needs a mode where the only variables are a combination of skill & luck leveling the entire playing field without it killing the economics of the game. This is a suggestion for a Skill-Based tournament format...

To start off, I understand and agree that games like Splinterlands should have a pay2win aspect to them where only the ones with more complete card collections have the tools to reach higher ranks. The fact that there are so many cards already with each of them having up to 10 different power levels makes the gap between players in 9 out of 10 matches so big that the winner is the one who "paid more" regardless of any skill. Even with the separate leagues, the game simply doesn't have enough players to most of the time generate even matchups which destroys all the fun in the game.

The Cost to be Fully Competitive

Collectible Card games, in general, can get really expensive if you want to be competitive and Splinterlands is no exception. There are 5 Different Leagues in the game (Bronze | Silver | Gold | Diamond | Champion). While these leagues have a minimum required Collection Power in order to be able to receive the rewards (Bronze 15k | Silver 70k | Gold 200k | Diamond 400k | Champion 500k), the true cost in order to be competitive is a lot higher with the available legendary cards alone adding up to around 1000$ (without counting the extremely rare ones who are most expensive) and this just for the levels that can be played in Bronze League which also indicates card prices are rather high right now. In reality, there is no need to have close to a full collection in the Bronze/Silver/Gold league as most prefer higher daily quest rewards instead of being competitive in the league leaderboard.

Looking at the leaderboards end-of-season rankings, it's clear that high win rates are mostly due to facing opponents that simply don't have the same tools as the top 10 who on average win 97% of their matches. 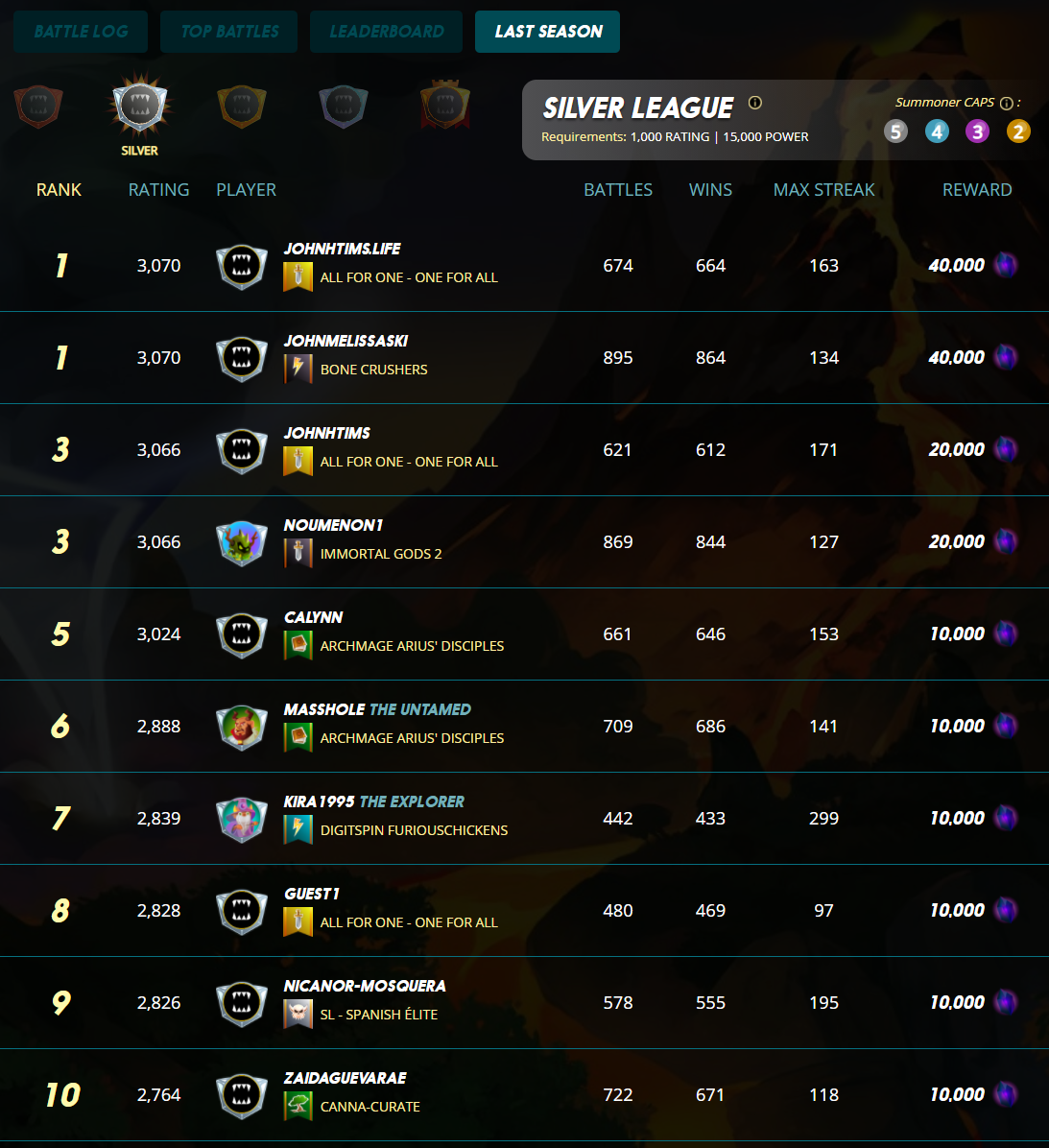 It would be awesome for Splinterlands at some point to have a game mode that fully removes the pay2win factor making it a pure skill game where everyone is equal. This can easily be done in a Skill-based tournament format where entry leases all players all the available cards for the course of the tournament similar to how the summoner's spellbook leases Starter Cards.

The same minimum Collection Power requirements based on the Leaderboards can be put in place in order to be able to enter and it would be much more reasonable to require players to pay an Entry Fee (Right now it's just stupid to pay a big fee to enter a tournament knowing others have a major advantage with a more expensive card collection). There is no real requirement for these kinds of skill-based tournaments to have outside funding, similar to poker a minimum guaranteed prize pool could be put in place to get initial player sign-ups.

Something like this would bring a lot of FUN to Splinterlands as everyone entering the tournament knows their skill level is the biggest factor along with some luck and not the major gap is card collection which will otherwise leave them without a chance against many of the opponents. It also doesn't undermine the economics of the game as it is cheap to organize as players fund the prize pool while there is a minimum requirement of collection power they need to have in order to enter.

It would also potentially allow for some kind of esports event that can be covered bringing a dynamic to the game that is actually interesting to watch and learn from especially if players build their deck anticipating to counter their opponent and such. In the end over multiple of these tournaments, the most skilled players will inevitably come out on top while everyone else can work on their own game getting better. Making a yearly big finals event out of it with the top players that can be watched also could give Splinterlands a lot more exposure especially among real gamers acting as a way to increase onboarding.

Something like this would truly get me excited about the actual game not making it a daily reward grind which it kind of has been for a while now. Let me know what you think about the idea in the comments below...

At the end of the day you can only win if you are enough skilled. Well coll suggestion. Try playing free tournaments?