gadrian in LeoFinance • 2 months ago

Splinterlands finally revealed yesterday what the new addition to the game will be: the governance token called Splintershards (SPS)

It's been discussed at large in the announcement post and then in the 2-hour long Special AMA which I just finished listening to. There is also an extensive white paper for SPS available, if you want to dive deeper into it.

I've watched the reactions closely and saw most players were very excited by the opportunities to earn more rewards and future discounts through staking.

That's an important aspect indeed. And it is very important to the player base. Staking your SPS on any (or even more than one) player, especially those high-ranking, for a mutual benefit is very innovative.

Kind of a zero-risk bet, but where not only the "gambler" wins, but also the one you bet on. Also, everyone wins, just in different degrees. As opposed to a winner who takes it all.

If you don't like the gambling comparison, here's another you are very familiar with. It will be like curation, except it's not related to earnings from posts, but to earnings from playing games. Just like best authors are usually better rewarded than others, so will best players be better rewarded than others, because they'll rank higher. There will be a 'diminishing returns' mechanism, which will make it so if everyone stakes on the best players, staking on less well ranked players may be better rewarded.

Anyway, that's the feature that got many excited.

But we have to look at the whole package to better understand its value.

Besides another step towards empowering stakeholders and decentralizing through governance, DAO and the oracles, there is another aspect we need to consider.

Those advisors and venture capitalists that now seem to want to take part in the Splinterlands journey, would have probably passed if nothing changed other than game updates.

Governance token and a part of it put aside for them, its development on a blockchain with high volumes and much more capital available were probably either a condition to have them onboard or a honeypot. Either way, it seems it works.

Only two of them were announced so far, because Splinterlands team only does that when the deals are finalized, but more are coming, we were told. Being incentivized through private sales of SPS, they'll have all the interest to grow Splinterlands, and much faster than it has grown so far.

Splinterlands has entered in a new stage - VC and professional marketing already signed. That's another league.

I'm so glad I never exited the game, not even partially, even though at some moments I had my issues and discontent. But this year I don't have any. :) I even like the Guild Wars, although it's in an incipient phase.

Ah, I almost forgot. We've got another airdrop coming (for SPS, obviously).

The airdrop is based on airdrop points each account will have and their percent relative to the collective airdrop points of all accounts. The airdrop will start in July, most likely, and will go on for one year, without a snapshot taken at a specific date.

The number of airdrop points for each type of asset is presented below: 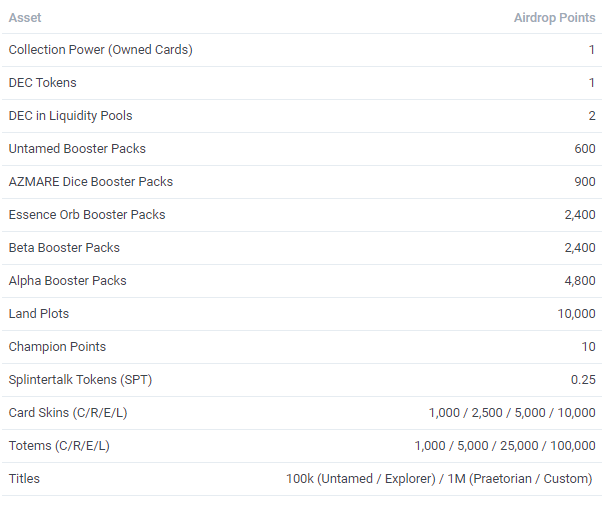 @nealmcspadden created a little spreadsheet if you want to use it to calculate your own airdrop points. Although not sure how/where to get the collection power for the owned cards. On Splinterlands it seems the same collection power is listed if I switch between 'playable' and 'owned' on the 'Cards' page, and I have many cards rented out.