Saved at the last minute...

gadrian in LeoFinance • 5 months ago

It's been a while since I wrote a post about #gaming.

Yesterday was the last day of the season for #splinterlands.

I don't even remember how the days of this season went by.

But here I was, with about 8 hours left and still in Diamond league II.

Long time ago Fire was one of my favorite splinters. But not anymore. Now it's my second least preferred one, after Life.

If I ever get Life as my daily quest, I automatically request another. With Fire it's tricky... because there's a 25% chance I'll end up with Life.

So, most often I grind through Fire instead of taking the chance at another dice roll. And to think I say this while having a decently upgraded (not maxxed) Yodin Zaku... It's almost a sacrilege! :)

Also, usually, by the time I start doing my daily quest, I'm already saturated by other daily tasks, and all I want is to finish it as quickly as possible.

That doesn't go as planned sometimes, because in my desire to finish quicker I overuse the daily quest splinter instead of alternating them, giving my opponents a better chance of choosing the right strategy.

That's what I did yesterday too.

So, after the daily quest I was still in Diamond League II.

That's when I usually stop playing and move on to something else.

But yesterday, given that it was also the last few hours of the season, I didn't stop.

I found Diamond League II incredibly low for the potential of my account.

So I kept playing for an hour or two and went right to Champion League III.

One league lower than the normal potential for my account, I believe, even without overplaying it, but still a nice "last minute" boost.

It shows that my mind was mostly off Splinterlands this season. Besides ranking, saved at the last minute, my total ranked play earnings are about 2.5x less than the previous season, which granted was a pretty good one in this regard. You can check how you did yourself using this tool.

On the seasonal rewards, there's nothing exceptional (no legendary, no gold foil card). I'll just add this screenshot to have a cover for this post, not because there's something really cool I want to show you below: 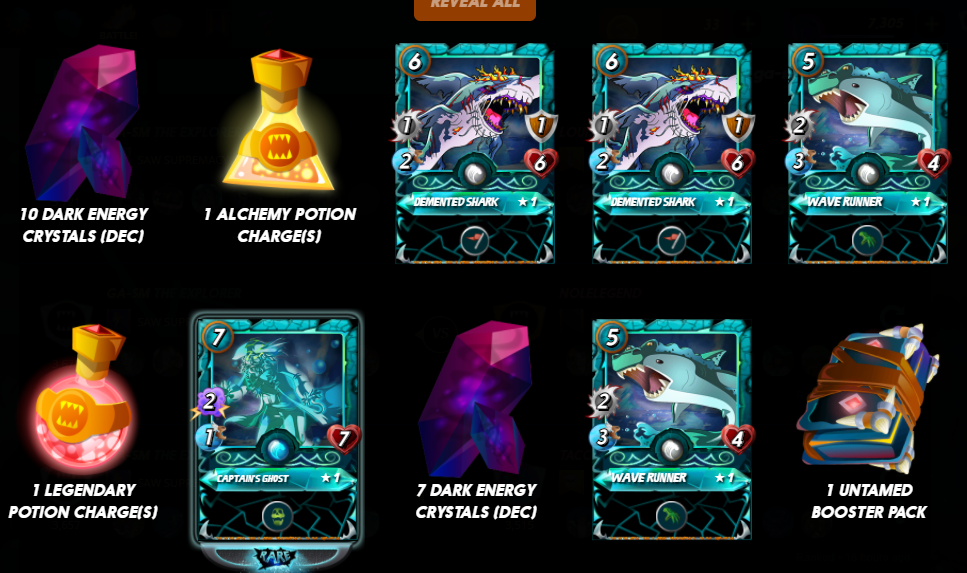 You can call it a water reward :)

Haha, yup, I didn't notice that!