niallon11 in LeoFinance • 7 months ago

While this is a true statement for my current level of @splinterlands, it will obviously vary from player to player. Depending on the cards used, league rating and fighting mana.

At the moment I am plying my trade in Gold I as I have dropped a few leagues from not having the time I would like to stay in the top divisions. That and all the good players that I would need to beat to get up there. Mainly the second reason really.

For those of you who aren't into blockchain gaming you will need to know that @splinterlands is a #hive based blockchain game. It has fast, free transactions in the market and all your cards are tradeable assets. They can be bought, sold, leased and rented on internal and external markets. The game has it's own currency which is the hive based token called DEC, (dark energy crystals) which can be used for in game purchases or traded on hive-engine. A market for hive based tokens.

When you win matches you get rewarded in DEC. The amount will depend on a variety of factors but I am often around the 50 DEC level for my victories. 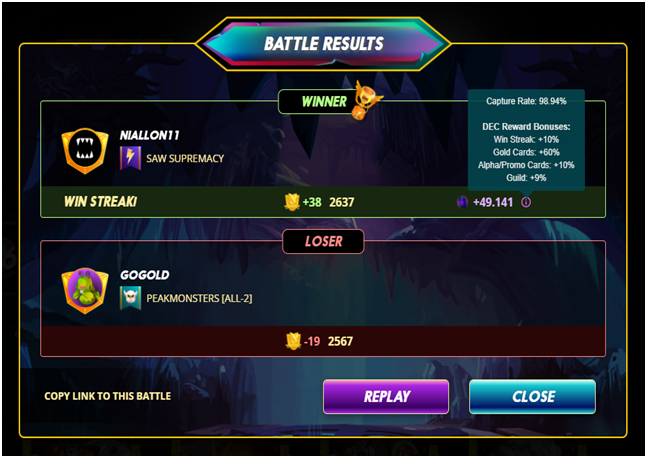 This was one of my last battles today when I dropped in to earn my daily quest rewards.

I do play with a good few gold level cards including summoners which helps me to earn extra DEC but that was a long term investment into the game plus they look way nicer than the regular ones, so win-win.

I did a lot of buying over the past few months when prices were down so now I will be selling some DEC to make a return on my time invested into the game. DEC can be traded at Hive-Engine where they have markets for a lot of different hive based tokens. DEC can be used on uniswap as well but I just want to stack more hive personally. As you can see, if I trade those 49 DEC on hive-engine they will net me 0.3038 Hive for the results of one match. While I will be powering up all of the hive, if you were to take a look on @coingecko and check out today's market that 0.3 Hive is worth $0.047 in fiat. The amount that you win, will vary from match to match. As your fighting mana reduces over time they will also lower the rewards until fully charged again. Prices may also vary from day to day. 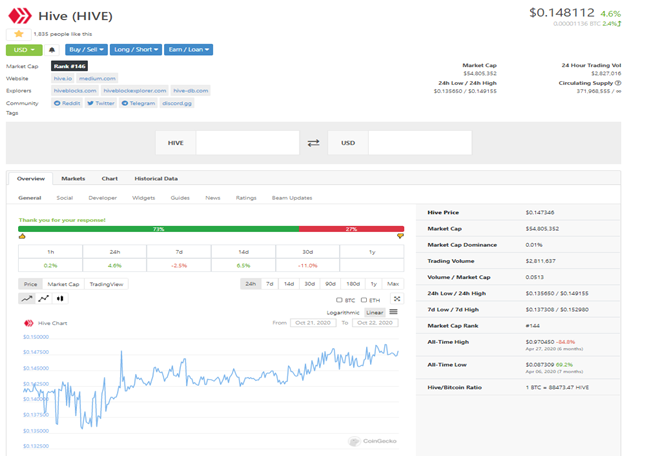 With all of that said, I tend to play about 20 matches a day using two accounts. Win at least 10 to make my quests for the day and can earn minimum of $0.50 up to $1 if I play a few extra games or win all of them. I have invested money into the game since the beginning but from what i have earned in rewards and from selling DEC i would be surprised not to have broken even over the two years of playing.

The game is brilliant and is the number 1 blockchain based game for a reason with lots of development and big partnerships with the likes of brave being announced.

I feel that it has a huge future and have been stacking cards for a long time now.

Has any of those games ever paid you out 1c? Just 1c back on all of the time and money invested into playing it.

This is the reason why blockchain based games and #web3 will be a huge success. Why would you even consider the alternative once the games development catches up to this technology. @splinterlands is just the start of a whole new industry that will pay for your attention.

You might say that earning a dollar a day isn't big money but it's more than I have earned on any other game and it's what that dollar will become that is even more important. $1 of Hive could someday become $100 with a few more games being built to this standard. It's just a matter of time before we see a lot more of it and hopefully built on hive.

If you would like to get started playing yourself feel free to follow the link and join the number 1 rated game in crypto.

I'll see you on the battlefield.

What is great about Splinterland and its economics is that they have pegged the DEC to USD and 1000 DEC = 1$. With the Lands sale the price might get around that value and considering that you have a good account, play at least 20 games a day that means you are earning 1$/day, 30$/month and 360$ a year, beside the other rewards from the game. These are pretty good economics if you are to ask me for having some fun and spending limited time for it.

For anybody playing consistently you will end up doing well over time. Especially if the game does keep growing some of those original cards could be worth a nice bit.

I love being able to earn $30+ a month and buy hive. Hopefully that hive prive will rise up to a few dollars over time and suddenly that one dollar is worth $20. Thats not bad for playing a game for an hour or so.

That's the future of gaming right there. Games that give back to the community.

I never actually thought of that before I just play for my cards lol but I'm netting a cool $0.02 per match I win, not bad in the grand scheme of things

It's just looking a little bit deeper at the game. The main thing is to keep adding to the deck and stack cards/dec but if you look at it as an income source you can stack a few cents with every single win you make.

Not the worst way to earn some crypto.