🤷What Is Splinterlands True MarketCap🤷

@rentmoney 70
about 2 months ago (Edited)
LeoFinance Looking at that above graph for Splinterlands total market cap most likely has left you in amazement. It was only a few short months ago in which we were celebrating a 5 Million Total Market Cap and then a 10 Million MarketCap and then.... Well you get the idea. BUT did you know that the above only shows the Total Market Cap for Splinterland cards.

The above graph while very impressive doesn't tell the full story. To get the true Market Cap of Splinterlands we have to take into account its other assets. So lets take a look at those assets and try our best to put a USD value on them.

The in game currency DEC which can be earned via play and used to make purchases within the Splinterlands game has seen some massive growth in USD worth. Hive-Engine current stats for DEC show that it has a current supply of 483,407,217.56 and with a current price of $0.00446 each that adds another $2,156,369 million dollars to Splinterlands current total Market Cap.

SPT tokens are earned on the Hive network frontend known as Splintertalk. SPT is short for Splintertalk Tokens. The Splintertalk frontend is strictly for blogging about the Splinterlands game. SPT tokens can also be earned by using the tag SPT on created post on the Hive network (Post must be about Splinterlands). Hive-Engine shows SPT current total supply as 85,355,736 and with each SPT being currently worth $0.00719 that puts the SPT current total Market Cap at $614,130.

The orginal cards in the Splinterlands game are called Alpha cards. The boosters they were found in can no longer be purchased in game but there's still a supply of them circulating the secondary markets such as Hive-Engine. The stats on Hive-Engine show that an Alpha Booster pack now cost $163.88 and with just 6,566 in supply left that puts the remaining Alpha Packs Market Cap at $1,076,068 USD.

After Alpha sold out Beta Boosters were introduced. BETA contained reprints of the original ALPHA set plus many new awesome must have cards. Currently Hive-Engine shows a current supply of 35,372 Beta Boosters that are currrently being sold for $79.94 each. That puts the Beta Booster Total Market Supply at $2,827,772 USD.

Once BETA was sold out next up was the UNTAMED edition. The UNTAMED set had no reprints and introduced some amazing cards. The only place UNTAMED can now be purchased is on secondary markets or from players who aleady own them. Hive-Engine is showing a current supply of 116,294 UNTAMED boosters that are currently being sold for $12.39 each. This brings the UNTAMED USD MarketCap to $1,441,033 USD.

ORB boosters were the first booster edition introduced that could be bought with DEC and DEC only. Of course they could be resold by those who purchased them with DEC for any currency accepted by the resellers. ORBS can no longer be purchased in game but like all other Splinterlands assets currently in existance they can be purchased on secondary markets like Hive-Engine. Currently Hive-Engine shows a supply of 10,905 ORBS that are currently being sold for $46.37 USD each. This brings the current ORB Market Cap to $505,637 USD.

Once ORB boosters were no longer available on the Splinterlands official site DICE was introduced as their replacement. DICE is still available for sale within the Splinterlands Market Place. They cost 3,000 DEC each or you can head on over to Hive-Engine and purchase with other currencies. Currently theres a supply of 60,179 DICE remaining for sale on the Splinterland site. Those remaining DICE boosters will cost a total of $805,195 USD. The supply on Hive-Engine is 72,224 and at the price of $10.80 USD each that is a total cost of $779,760 USD. This brings the grand total marketcap for DICE Boosters to $1,584,955. 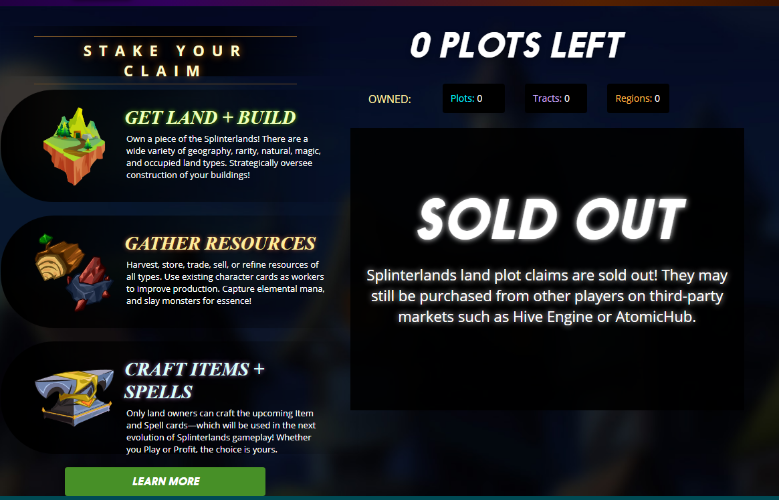 We didn't include LAND value in our Grand Total Market Cap because it hasn't been implemented in the Splinterlands game yet. Land sold out rather quickly and its lowest presale price was $10 USD per plot. Currently these same plots have sold for upwards of $250 USD.

Disclaimer: This is not finacial advice. All information displayed in this article was taken from the official in game website Splinterlands and the secondary market Hive-Engine. Never invest what you can't afford to lose. I used the last sold for price for each asset to determine their marketcap value.

Splinterlands is a digital card game created by @aggroed and @yabapmatt. Game Play is ongoing with prizes being offered which have real monetary value. You can get started with investing in or playing Splinterlands by clicking here. Read all about the airdrop announcement via clicking HERE

@pizzabot 45
about 2 months ago

@sharkmonsters, sorry! You need more $PIZZA to use this command.

$171 Million in assets plus $29 Million in Land assets for a total of just over $200 Million in total created value. That's a pretty nice bit of work @aggroed and @yabapmatt have created. Keeping my fingers crossed that SPS has found the level it's comfortable at and we stabilize at this price.

I agree, they created something amazing.

I think SPS will dip some more. We have staking now so that will slow the dip process. We won't start seeing SPS true value until its use casses are implemented. I suspect a bump in price once something for in game changes is announced that we can use SPS to vote on. Another bump in price once the airdrop is over. I'm Holding and staking what I can as staking allows us to earn even more free SPS tokens.

I'm right there with you. I thought about gambling a little and trying to sell some of my airdrop when the price was high and buy back when it dropped, but decided it wasn't worth the risk. I'm staked every SPS I got so far and will continue to do so at least until the end of the year. I'm hedging on the end of the year in case we get a end of year rally like we did 4 years ago. Remember $8 Steem? I wish I had unloaded a bunch when that happened.

Thanks for the curation, its appreciated.