SPLINTERLAND BATTLE CHALLENGE: The three headed monster forged in the flame of the fire splinter

burlarj in The City of Neoxian • 2 months ago (edited)

The Cerberus used to be one of my favorite monsters when i newly joined splinterland because it was a very good card to use in the lower league, it is also good in higher leagues but i hardly have a chance to use it due to the presence of lord arianthus annd other monsters that ca do better in the front position..

It is among the first edition of monsters that was released on splinterlands as it is a beta card but also later had its alpha version which is more pricy, it is a rare card with a good speed... 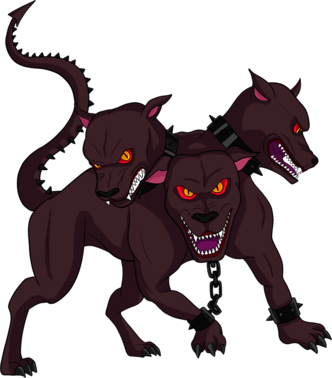 It’s not easy being a three-headed dog. The constant bickering, biting and slobbering are always a distraction, and the heads can rarely agree on anything. When summoned to battle, these giant dogs present a fury of claw, flame and fang that is difficult for any monster to get past.

The Cerberus is gifted with two amazing abilities, the first one is the heal which allows it to recuperate once in each round after every hit and the retaliate ability that gives it chance to strike back when hit by a melee monster...

I was paired with #RITCH in a low mana battle cap of 15 and the rules stated: I used it in the front due to its low mana and healing ability, it will be able to take more hit and recover well enough for the next round and i believe in its speed for it to be among the first attackers and one more advantage is the retaliate ability it has incase the enemy use a melee in the front too. This is another monsters with good speed and a reach ability and what makes it more dangerous is the trample ability, so my plan was to let cerberus do some damage and the giant roc can finish it the task and also weak the opponent other monster with the trample but the cerberus didn't last long, the roc saved the battle due to its flying ability that made the opponent flesh golem miss it... 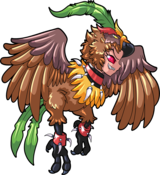 A monster with opporrtunity ability is just what is needed in fog of war ability, as it will help to terminate the weak monsters used by the opponent who thinks they will be untouched because of the rules, it perform well to my expectation and if not of its last strike that kills the golem, it would have been a loss battle for me..

Here comes the most used card on splinterlands , i used it as a bait incase the opponent also comes with opportunity ability then my chicken will be their first target and that will save my other monster some time and chance to wreck havoc....

Giant roc as you mentioned in your battle report saved the match. I was surprised when I saw the Cerberus level 6 and your battle rank 2403. I think with these powerful cards like Cerberus, you could be on the Gold leaderboard. I am planning to level up more of my fire elemental Beta cards.
Thank you for sharing this match.

You are right but I don't compete for gold leaderboard, instead I advanced to diamond league and end the season at diamond 2....

Great, you have made a choice similar to mine last season.

definitely not magnor, i think i like the spark pixies more