This week we got themed with an Earth monster named Javelin Thrower. It is an old RARE reward monster with ranged attack. 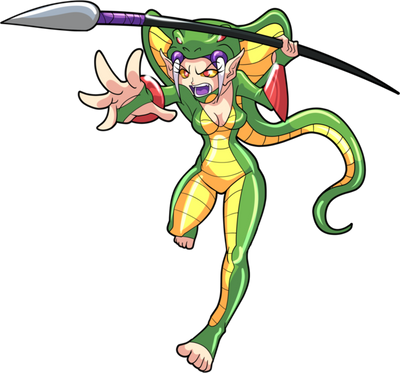 Javelin Thrower is a RARE rarity Reward edition monster that lies under the earth deck. It comes with the piercing ability which means it gives additional damage to health after armor is broken. Other than Piercing it gets Dodge too at level 5. It was a 21 mana battle with Melee Mayhem and Unprotected rulesets, I'll explain each monster used in the battle below.
So, let's move forward.

I went with Layanna Natura Earth Summoner, it gives +1 health to all friendly monsters. I like to add up extra health using this summoner and also I combine another monster Wood nymph which gives my monsters more strength.

My first monster was as usual Old legendary Lord Arianthus, I used level 3 of it as a tank due to its multiple abilities including Thorns, Void, Magic Reflect, and Shield. It is a good tank for most of the battles and I am addicted to using it as a tank whenever it is available. So I used it again.

In the second place, I used a Javelin Thrower level 5. As it's ranged attack it can take snipes from opponent too so I placed at 2nd because of its dodge ability. Dodge gives increased chances of evading ranged and melee attacks and I wanted to take advantage of that luckily there was no sniper from my opponent.

The third position was covered with Spirit Shaman. I use this monster too often with my earth deck because of its Stun ability, though it doesn't work all the time still I like it. In the current battle under discussion, stun ability helped me win this battle as it worked right on time when I needed it most. It also has a divine shield which gives it the advantage of the first attack gets ignored.

Next, I used level 6 Wood Nymph, it's a common earth reward monster with tank heal and strengthen ability. Though my opponent used affliction which made healing not to work but strengthen helped stay my tank alive for longer.

In fifth place, I placed the Furious Chicken, the 0 mana chicken helped me to waste my opponent's sneak attacks.

Yes, it worked well and I won this battle just because of this powerful woman. It was her who kept fighting till the end and destroyed my enemy till death.

Do you use Javelin Thrower often?

Well, I haven't used this monster much. But I will try to take her with me whenever I feel it fits for given rulesets.