A Most Unusual Blue-on-Blue Splinterlands Battle

digital-wisdom in #splinterlands • last year
How often do you see a player using Alric Stormbringer with only one magical attack monster? How often do you see one using Valamor and not using any magical attack monsters? I don’t use Water as often as I should – but this situation just seemed to beg for it.
https://steemmonsters.com/?p=battle&id=7a12e9579fa8b8d49c7d7a4ec7ba8ecd3feaf6ef

The reason why was because the special game rule was “Target Practice: all Ranged and Magic attack Monsters have the Snipe ability”. Normally, that causes players to put Lord Arianthus in the second row to soak up a lot of initial damage and return 50% (rounded up) of all magical attacks. Though, inexplicably, my opponent put his in the first row and allowed my two Ranged attack monsters to wreak havoc on his back row without having to go through Arianthus first.

Wanting to get ahead on the early damage race, in addition to Lord Arianthus, I used three normal attack monsters and only two ranged attack monsters. The choices were pretty obvious from there. Unless the special game rules prevent Crustacean King, he is a must include for blue with his Tank Heal and Protect abilities. With so many regular attack monsters, the 3 attack for 3 mana Pirate Captain with Inspire is a no-brainer. Spineback Turtle with his armor and high health anchors the front. Sabre Shark and Feasting Seaweed, costing a total of 7 mana for 10 attack, can then devastate the back line at will. I used Valnamor because I thought that the extra speed and health was easily worth the extra mana.

My opponent countered with a straight ranged and magic assault (not including the Creeping Ooze in the last position) – which meant that he had to get through my Lord Arianthus before hitting anything else.

Round 1, his Ooze died. Round 2 his Prismatic Energy died while my Arianthus died with my opponent’s last attack. Round 3 saw the demise of his Pirate Archer. His Crustacean King died round 4 – quickly followed by his Water Elemental early in round 5. At this point, my 8 health Spineback Turtle would have had a simultaneous kill/death with his 7 health Lord Arianthus – except for the 15 attack I still had in the back row (and the healing from the Crustacean King).

The strategy obviously worked just as I hoped – but it’s unclear how much was due to the (mis)placement of my opponent’s Arianthus. I think that I still would have won but a closer match might have given me a better idea about altering the positions of my line-up. I’d never change the Turtle and Arianthus and likely not the Crustacean from what I believe was the best protected position. I put the Seaweed third because I assumed that his scavenged health made him the most resistant to blast from hits on Arianthus. Losing the Shark drops my total attack from 19 to 14 while losing the Archer drops it from 19 to 13. This plus the fact that the Shark has two more health suggested that he would be the best rear guard.

Two shout-outs are necessary here. One is, of course, Lord Arianthus. Anyone who doesn’t have one needs to get one before this now out-of-print card’s prices skyrocket. In diamond and champion matches, he seems to be used as often as not – and the special rules prevent him from being used in the majority of cases where he isn’t. 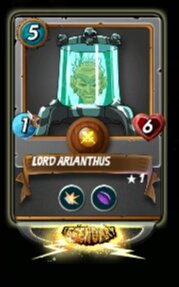 The other shout-out is for the new monsters with Opportunity and Scavenge that Untamed brought. If you aren’t using these at the highest levels, you’re leaving a very valuable tool in your toolbox. Again, you need to get them before people realize how good they are and drive the price up.

I’ll be posting a lot more SplinterLands content in the days to come. Until then, may your monsters always hit and your enemy’s miss when you really need them to.

Congratulations @digital-wisdom! You have completed the following achievement on the Steem blockchain and have been rewarded with new badge(s) :

Dude. This breakdown is AWESOME. I read all your words. So very easy to consume. And I agree, it's likely you would have still won... but could have been more of a nailbiter with Lord A in a better position on your opponent's side.

Thanks for sharing such a thorough analysis of your game!
😍@carrieallen