Bought a new card in Splinterlands and why it matters 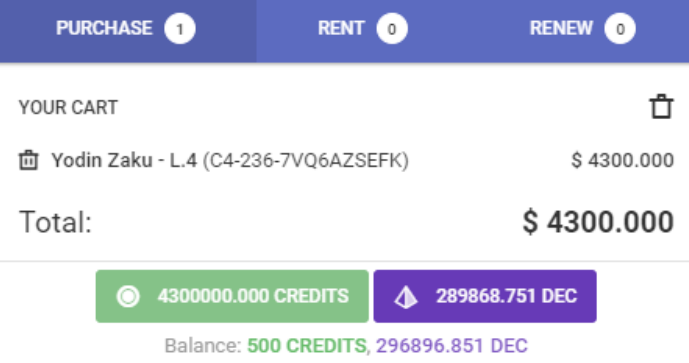 of course, why it matters to me, to complete the title.

Now to the story. Last week I've asked you in this post, about the games with the highest earning potentials.

Well, at the moment, Splinterlands is rocking it for me. Yes there are some other real good out there, like Rising Star or Axie Infinity, which I don't play as I'm not aware of the economics.

Even if I'm an early Splinterlands adopter, my deck has been lagging behind, especially on the Untamed and Dice editions. On Alpha, I'm pretty good, having most of the cards maximized, not all, but most of them.

I needed to change something about that, especially with the launch of Chaos Legion, where a new league will be launched with cards from the later editions, where I would just leave so much potential behind.

So, today I've bought one of the most powerful summoners in the game, the Yodin Zaku. I did not have any card and have bought directly the maxed version. It was $4300, which is the price of a car, which might sound crazy. In some parts of the world, I can buy an apartment for that money.

I've bought it as an investment, as probably this card will not get any cheaper in the near future. Also, it brings some earning from the SPS airdrop and also from renting, if I rent it out.

It matters for me, as it is the most expensive crypto asset bought in a transaction. I've invested also before in cards, but nothing like that in my small crypto world.

Already it paid out, as the value increased by 19% to what I've paid for.

It matters, as I think more and more average Joes, like me, will invest money into items like this. This is the start of the mass adoption. If more normal people put a car into the game, the crypto space can moon.

How do you see it?

At least you put your money where you might make a nice return.

That is already done. He wrote in the post that "Already it paid out, as the value increased by 19% to what I've paid for".

The market is crazy nowadays.

He can make additional income with it by either using it in battles, or putting it up on the rental market to offer it to others to lease it.

Wow, congrats on that pick up. I think that is one of the only summoners that I don't actually have. I could be wrong though. I know if I do he is nowhere near maxed! I hope it continues to pay off for you down the road!

That sure seems like an expensive buy. However Yodin is definitely a beast of a card. It should definitely make it easier for you to win fights if you got maxed level cards.

It was $4300, which is the price of a car, which might sound crazy. In some parts of the world, I can buy an apartment for that money.

Apartment? You can buy a complete house with a garden in many countryside parts of my country (Hungary).

Yeah, sometimes cryptostuff prices get too crazy. I mean, this isn't exclusive to cryptos: there are Magic the Gathering cards worth half a million USD (Black Lotus).

Maybe the price of some of the Splinterlands cards will also reach something similar. Who knows.

That's what everyone here expect, isn't it? hahaha

Congrats! I'm already a bit jealous, because I don't have it maxxed, and probably never will.