HIVE Blockchain Game Splinterlands Play2earn: My Best and Worst Experience so Far in the Game. 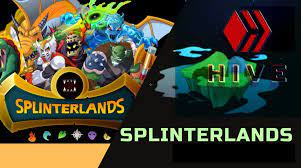 MY FIRST EXPERIENCE IN SPLINTERLANDS

I started playing splinterlands for more than two months now and honestly did some many mistakes. Up until now, I still have much to learn in this game and a lot of things I have no idea of. But playing in this game until now also gives me some lessons, useful ideas, tips and strategy which help me a lot to earn profit in this game. The first two weeks I play in this game were like I was a donator of this game just like in other online RPG games. Someone who donates real money but having in-game items, assets, etc. in return. But here in the first couple of weeks playing, it was like I donated DEC and received nothing but loss and haven't earn anything. I was playing the game with lack of experience & research and how the game is played and just only the default tutorials in the game and surely not enough for the whole mechanics of the game. The only good thing about that time was EXPERIENCE. So if you are new to this game and planning to play, better DYOR first, learn first the game before spending penny to avoid major mistakes and loss. The summary of mistakes I did when I was new in this game is: 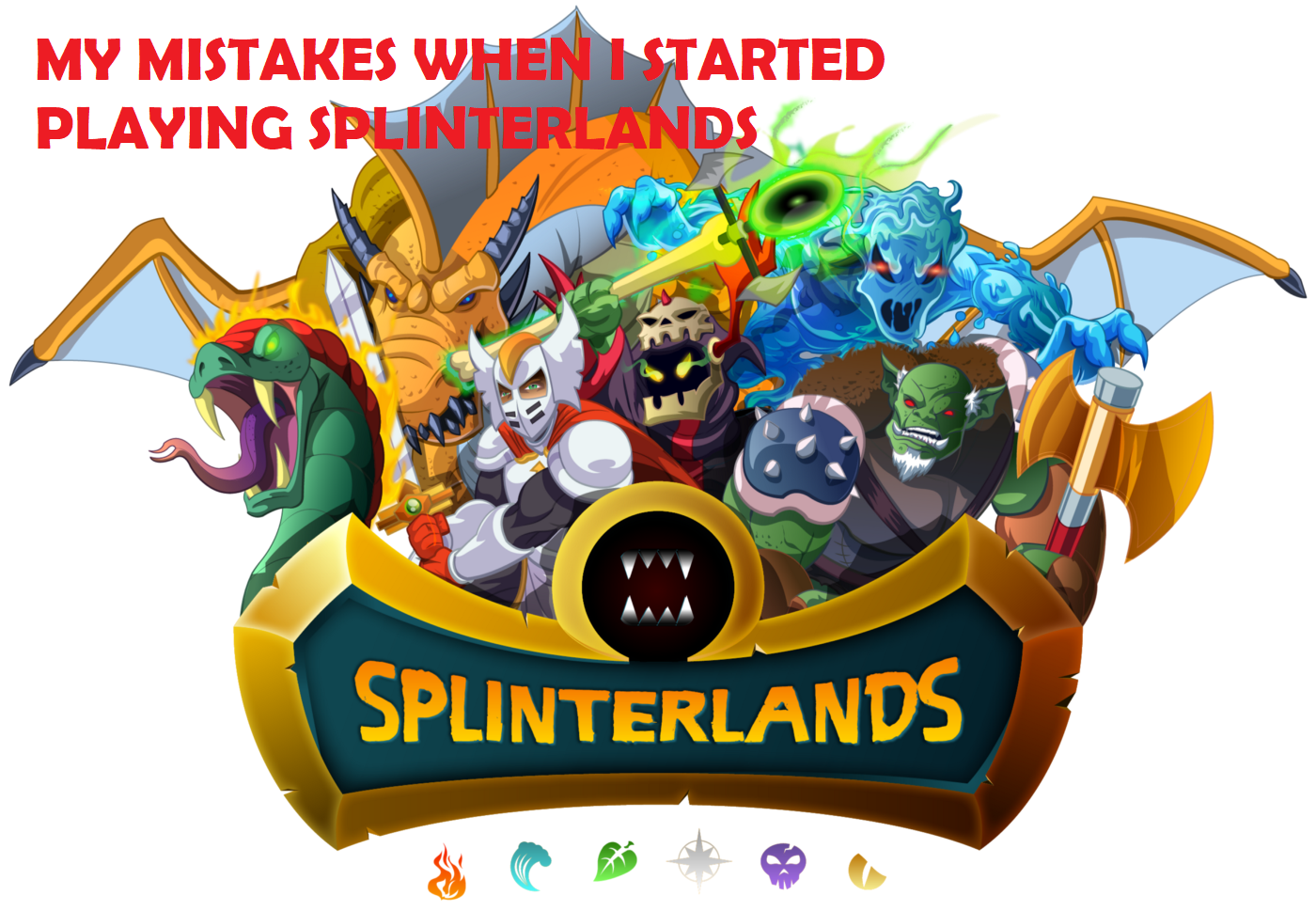 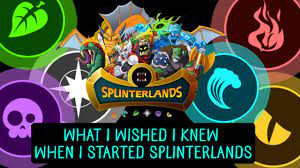 WHAT I WISHED I KNEW WHEN I STARTED PLAYING SPLINTERLANDS

Today, I still also make mistakes especially in renting during season end, how I prepare my ECR for the next grind and some minor mistakes in the gameplay.

But the BEST part of playing splinterlands is the fun and enjoyment of playing the game, being with new set of friends by joining a guild and most importantly the EARNINGS. This is why we play a play2EARN game because of the rewards that can be converted into real MONEY.

I would like to list my earnings in the game not to boast but only to share with you guys especially to the new players so they can have an idea of possible earnings and rewards they will get. It is not a big earnings because I'm not a big investor in the game but rather a small one who supports and trust the game economy and sustainability. This is some of my BEST and I can call it a BIG reward for myself because as a gamer in my youth days, I play most of the trending online games but didn't receive any earnings in playing the game but instead I pay for the rental per hour in Internet Gaming Cafe or the Gaming PC setup I bought. But here in Splinterlands, if you know what you are doing or you invest more in the game then it will give you back some decent EARNINGS in return. So this is my list of BEST experience in Splinterlands

1.) The DEC reward per battle by just playing the game which I converted some in SPS for staking, bought cards for ingame assets (also eligible for SPS airdrop points) and some for my so called EARNINGS which I converted into real money. 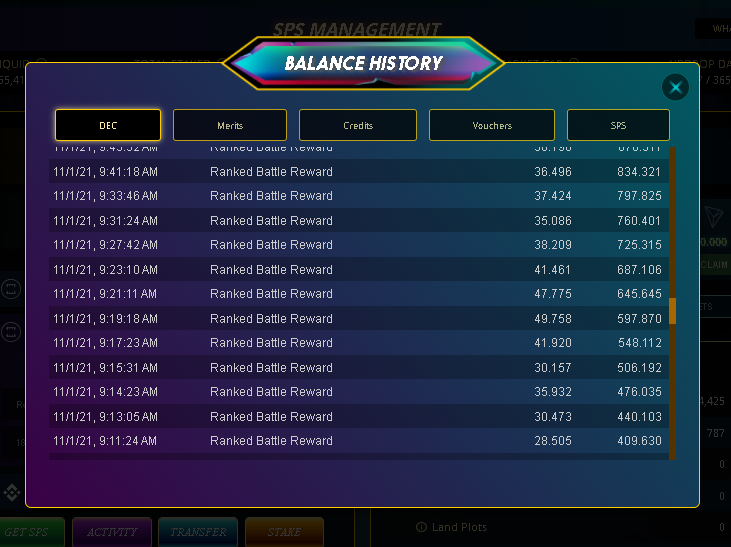 2.) I bought some SPS and invested in the game for long term goals. This staked SPS is earning daily and I will be planning to use some of this to buy Chaos legion packs soon. Planning to stake more if I have extra money and hoping SPS value will rise before I unstaked it in the future.

3.) My Daily Chests rewards & Season End Chests Rewards since playing the game. I looted mostly common Reward Cards (which is good enough for additional small amount of power but accumulating overtime), Potions, some DEC's and Credits. Luckily enough, I looted 1 Epic Gold Foil Card Lava Launcher, 1 Epic Regular Foil Lava Launcher, 1 Epic Regular Foil Djinn Chwala, 4 Epic Regular Foil Uraeus and 1 Legendary Regular Foil Card Harklaw. This assets is so valuable because it adds power to your account which is required for advancing to higher league. This cards also counts for SPS airdrop points in collection power. I also rented it out during season end because the day before season end. I can set the price higher than its regular rental price for my high rarity cards especially gold foil ones. This NFT cards also will probably go higher in value overtime due to its scarcity when packs are sold out and many players will demand old edition cards.

4.) Joining a Guild recently. Having a guild in the game is like having a family in game. They help you, teach you and share their best strategy to you how to be good at the game especially the profit matters. Also you have new sets of friend which you can talk to about the game or in your daily lives. If you are also in guild, you have a DEC bonus percentage per battle, depends on the level of your guild and also you can have Gladius packs. Our guild is new and still growing to become a strong guild someday. 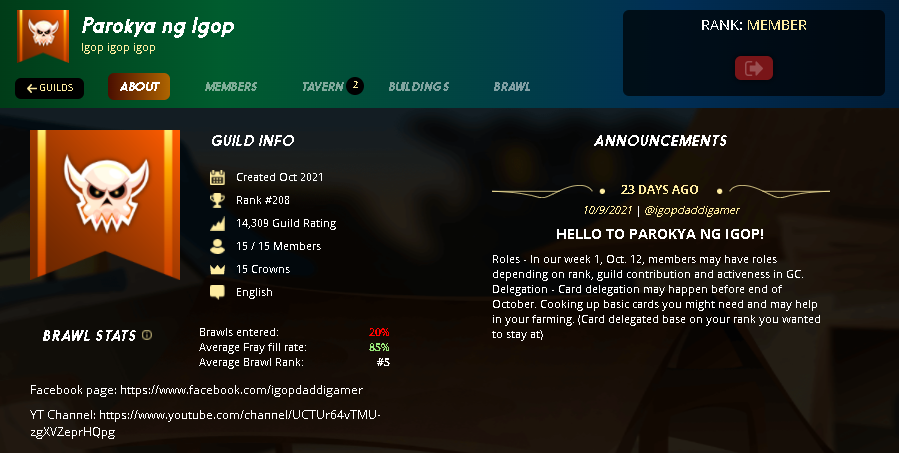 5.) Airdrop Points. This points is like bonus which give you SPS daily. The more assets in your game the more airdrop points you will receive. 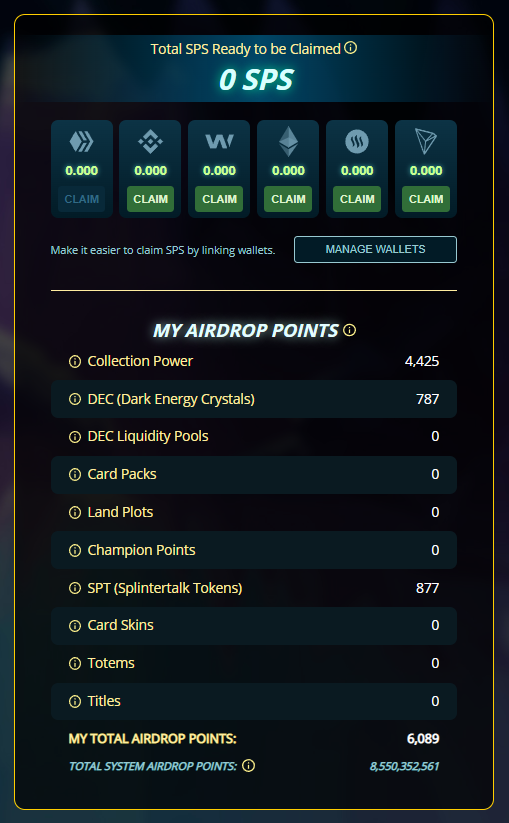 6.) Writing Blog in Splintertalk.com, 1up.zone, ecency.com, peakd.com,hive.blog and other related platforms. Not necessary you posts in each platform but rather just posts in any of the platform mentioned and use hashtags then your post will automatically posts to platform with that specific hashtag. Also your posts in Splintertalk.com or 1up.zone will automatically post in the main platform ecency.com, peakd.com and hive.blog and no need to put a hashtag on it. I posts some of my experience and learned strategies/tactics in the game and other related Splinterlands Contents. There comes a time my post was being upvoted by monster-curator with decent SPT Token rewards in splintertalk.com and I really wasn't expecting to be upvoted by @monster-curator. So even if you are new to blogging, you are still elegible for big upvotes. Considering that your blog/article posted has good quality content which attracts the community and curators (ex. @monster-curator or #oneup-curator) then your posts will be upvoted. The reward from upvotes will go directly to your hive wallet/hive account after 7 days. 50% of the total upvote reward will go to the author and the remaining will go the curator community. Not bad right? Just posting what you love to express in the community and earning rewards in return. This rewards like SPT token, Oneup token, HIVE is a cryptocurrency in blockchain which can be traded or converted into real money. Some of my earned SPT tokens is being staked and delegated it all to monster-curator. Some of it is converted into DEC and used it in Splinterlands game. Some of it is converted for real money as a reward and earnings for myself.

So that would be all of my worst and best experience in the #1 NFT Blockchain Game Splinterlands. Hoping I didn't miss something. My next step would be still play the game until the very end, learn new tactics and strategy in the game and maybe search for other ways to maximize or be effecient on how to EARN more in the game. Cheers and Lets play splinterlands!!!

If you enjoyed my post and want to try Splinterlands, please use my referral link:
https://splinterlands.com?ref=angelrey1990

Congratulations @angelrey199026! You have completed the following achievement on the Hive blockchain and have been rewarded with new badge(s):

This is a great post with so many helpful details about playing Splinterlands and what you would have done differently. It seems like you have learned quite a bit of strategy for the short time you've been playing the game. Thank you for sharing your knowledge and experience.

Copying and pasting previous posts or significant parts of them could be seen as spam when:

Spam is discouraged by the community and may result in the account being Blacklisted.
Please refrain from copying and pasting previous posts going forward.

I really like the way you told us about your mistakes and what you would have done differently.

Ignore the downvotes as I can't see anything about your post that would deserve a downvote.

Keep blogging and sharing I learned a lot from your article, thank you for taking the time.

I did not know about Energy Capture Rates, thank you for expanding my knowledge of the game :-)