How good is Shadow Snitch? So good even when I misplay the ruleset, he wins the game. 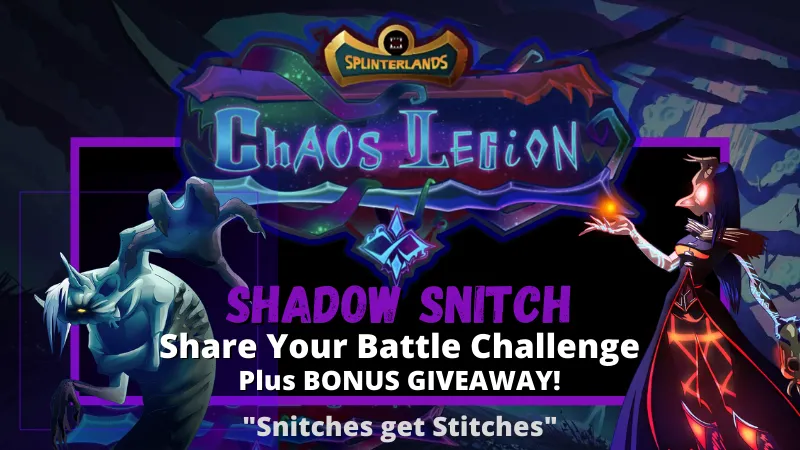 As I've said in some previous posts, Death is my favorite splinter, so it's a joy when the battle challenge is in that splinter. And this week, it's Shadow Snitch, a card I grabbed up as soon as Chaos Legion released. In this post, I'll go through a battle where I missed one of the rules, and still was able to pull out the win, in no small part because of the snitch.

The battle was 27 mana cap, reverse speed and equalizer ruleset with all open splinters.

The equalizer ruleset is one of my favorites: opponents will often overspend on a beefy card, and I'll reap all the benefits while playing low health cards myself. So I loaded up with some low health/high damage cards: fiend, riftwatchers, snitch, badger, lich, and lira. But, you're probably smarter than me, and realize that a lot of these cards are high speed, and will be terrible in the reverse speed ruleset! Reader, you're right. But let me show you how I won anyways because of the snitch.

Fortunately, my opponent went Sloane, so they spent 4 mana to my 3 only for me to nullify their advantage. They started with a high health taunt (overspending on high health in equalizer is a bad idea), and had some nice slow damage dealers, most notable pelacor arbalest.

Because I missed the reverse speed rule, I was at a decent disadvantage here.

My 0 mana with 9 health fiend died, and his 8 mana 9 health card took some damage, but not much else this turn. My snitch is now in reach range to deal some damage.

This turn, his taunter bit the dust, my riftwatchers got a nice dodge from the arbalest (yay flying!) and knocked its armor off). The snitch did some damage this turn, helping to send the taunter to its grave.

My riftwatchers died, and his harpy was down to 1 health.

The batle slows down, so here are a few turns in a row. Each turn, pretty much one frontline card is dying: his harpy dies, my snitch dies, and his fortify card is down to 1 health. Before it died, my snitch did more damage than most of my opponent's cards, other than his arbalest.

My lich simply had too much health for the arbalest. By the end. my lich had 18 health, was losing 4 from the arbalest each turn, but was regaining 2. The arbalest couldn't live long enough, made it to the front of the battle, and didn't last long once it couldn't shoot any more.

This battle was kind of bad on both players. Sloane is not great at lower mana caps, and this is just enough for him to fit enough decent cards in. But my opponent should not have played the taunter. They should have dropped some cheap card there (jaguar maybe, or something with shield) to absorb hits and put more mana into ranged damage.

As for me, I played 3 fast cards I shouldn't have. Lich was my saving grace being slow and powerful and gaining health as the battle went on. The snitch with 3 speed is even a little faster than is ideal, but he turned out alright. If I did it again, I'd drop the riftwatchers, lira, and badger for some slower cards (maybe worm).

If you want to see the battle in its entirety, check it out here: