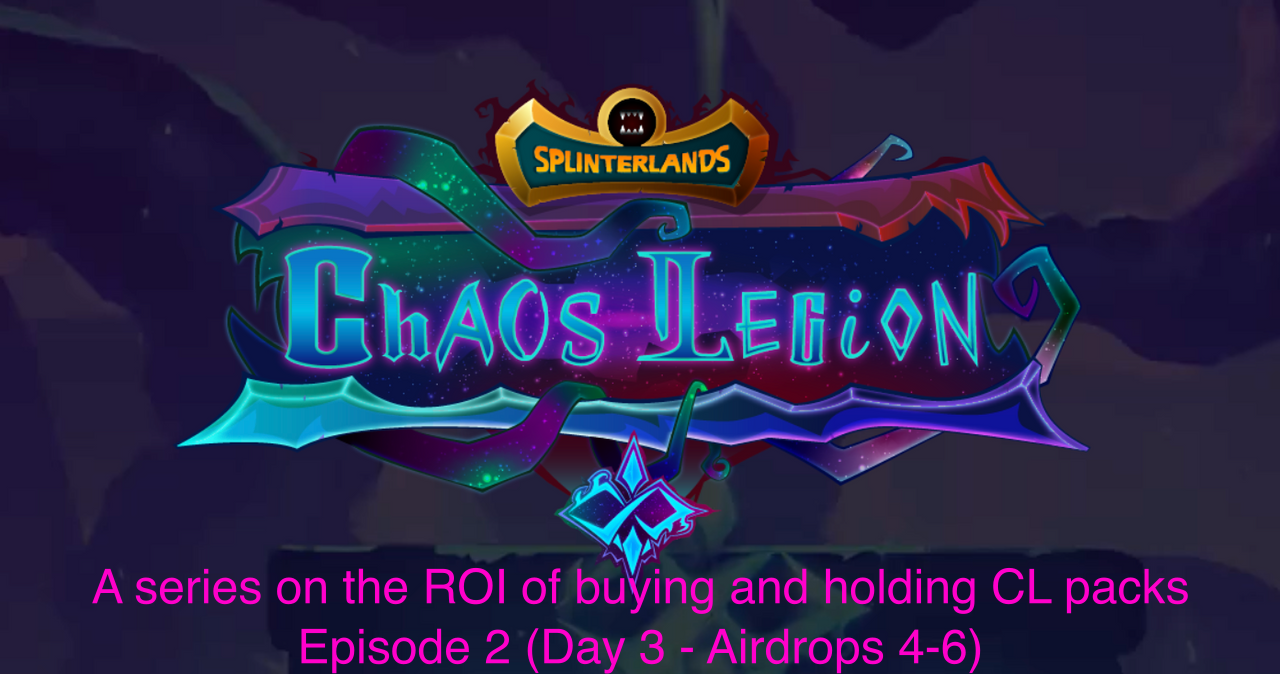 Well, I probably should have waited a day to start this series, as the next set of 3 airdrops all came today. Today, I'll show 1) what the airdrops were and my quick thoughts (I am by no means an expert on the power of a given card), 2) how I fared in receiving them (with a comparison to the expectation), 3) how this has affected my ROI, and 4) some general conclusions/observations. My plan is for this to be the general structure of the posts in this series, with some variation if there's something particularly noteworthy.

Previous posts in the series

This set of 3 airdrops fleshed out the cycle of legendary airdrops for the fire, death, and earth splinters (I don't know, and don't have a good guess as to whether the next airdrop will truly finish it off with a dragon legendary given how many there were in the base set).

Earth: Iza the Fanged: I generally dislike the Earth splinter, as it has a lot of the strongest cards and commands the highest price for those cards as a result. But cards that aren't spectacular are relatively cheap. Iza, as a fast, sneaky scavenger, would probably be gangbusters in a splinter like Water, but in Earth, it's just okay. Maybe good with Wildwood Wizard.

Death: Lira the Dark: Death is my favorite splinter, so I have a bit of a bias in liking this card. It feels like a budget dragon jumper, with high speed and opportunity. It has lower damage at most levels, and the range instead of melee means it's useless if it makes it to the front unlike Dragon Jumper (especially with the latter's flight). Snare is nice against some nice opponents, but is something I don't value too highly. I think in mid-high mana cap matches, this will very often now be my last card in the lineup.

Fire: Grum Flamebalde: The talk of the town. An escaped gladiator with bloodlust. There seems to be a lot of consternation about it not being gladiator exclusive, but it doesn't seem too bad to me. A card going 5->6 damage and 1->2 speed is not a big difference in my mind. But time will tell. I also don't use fire very often, so this won't get a lot of use from me.

How lucky was I?

From my 1750 packs, I was guaranteed 5 of each. The expected total number across all 3 was 16.5. I did slightly better than this: 5 Lira, 5 Grum, and 10 Iza(!). I immediately leveled up Lira to level 2, but left all the other copies at level 1, perhaps to rent (not sure what I'll do with the airdrops while I wait for them to appreciate. If you have any ideas, let me know!). 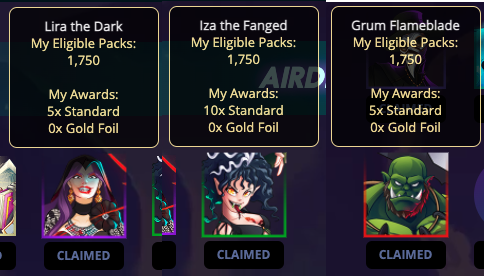 So far I'm pretty happy with my plan to not really count on a GF. I had a 44% of getting no GF with this many airdrops, which if I had been counting on at least one, I'd be pretty disappointed.

One area where I did misjudge is the value of the airdrops. In a previous post, I guessed they'd be worth the same as the most expensive legendaries, and this is certainly not categorically true. Iza is pretty cheap, and Lira is relatively cheap. Only Grum is reasonably valuable relative to other legendaries. If this continues, this will certainly put a damper on my expectations.

Strategy 1: Packs from the store

Strategy 2: Packs from the marketplace

Strategy 2 retains a solid lead, but already it has decreased. Between a lower pack price and the first airdrops, the difference is now 30%. This gap will certainly decrease over time, and will hopefully disappear altogether with a high enough timegrame. 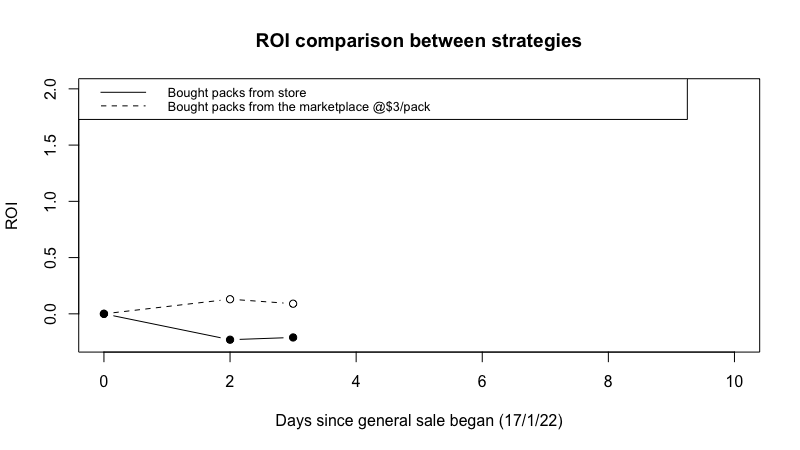 It sucks to see a negative ROI, but that was very much expected. One key factor to success in investing is seeing a plan through and not panicking when you see some red. I think my resolve will be tested throughout this, particularly in comparison to seeing the quick easy returns of the alternate strategy. But time will tell which is superior.

I do think I've been a bit optimistic in some of my valuations (e.g. the most recent airdrops are selling for less than expected), and so I think the buying from the store strategy might be slightly better than I expected, but I still think the airdrops are worth it. If packs hit $3.5 again on the market, I might sell some of mine for more airdrop chances.

Like this content? Want to join in the fun? Use my referral link below to join the game, and I'll send you 1000 DEC (worth ~$4), and a series of cards to use for the first two weeks in the game to get you started!

Wow nice airdrops. To the store packs you should now add 10000 airdrop points from the airdroped legendaries, plus possible rent from now on. It will be interesting to see your progress, I think in the long run the option you choose will be better. Have a slice of !PIZZA

Oh! I didn't think about the airdrop points from the airdropped cards! Thanks! I'll start including those moving forward.

And yeah, if I rent them, I should probably count that income as well. I'll need to investigate pekamonsters and see how easy it is to filter rental history by card. If it's too hard I might just guesstimate it, as I don't wanna spend an hour on each post, but if it's easy that's definitely something to addd as well.

And yeah, I think in the long run my plan will be better (otherwise I wouldn't have done it haha), but I am certainly not 100% confident about that. A big part of this series is mostly for my own gratification to see if I was right.

Congrats on the bonus Iza drops! I think 6 (out of 8) of the remaining airdrops are the player-designed (or at least made-with-player-input) legendary summoners. While we can't say for sure what their prices will end up being, I think those tend to be higher value so the average price of the airdrops could still end up on the high end of the legendary range.

And yeah, I'm definitely counting on value for those. My estimate was they'll come out at around $50-60 per BCX. We'll see if that actually pans out or if I was optimistic on those as well.

While I, too, am noticing most players are experiencing considerable paper losses on their purchases (especially if they were too early), the long-term value is likely one many will enjoy if they prepare themselves for it.

Land seems like a potential catalyst for a bounce down the road, and for those that bought as many packs as you have, lands could represent a rapid return to a positive ROI.

I'm worried land is gonna drop the prices of everything that isn't land. People are gonna sell cards in a mad rush to get land and its price is gonna spike. Although I am hopeful they make older cards extra useful for land and that helps bump up Alpha/Beta card prices.