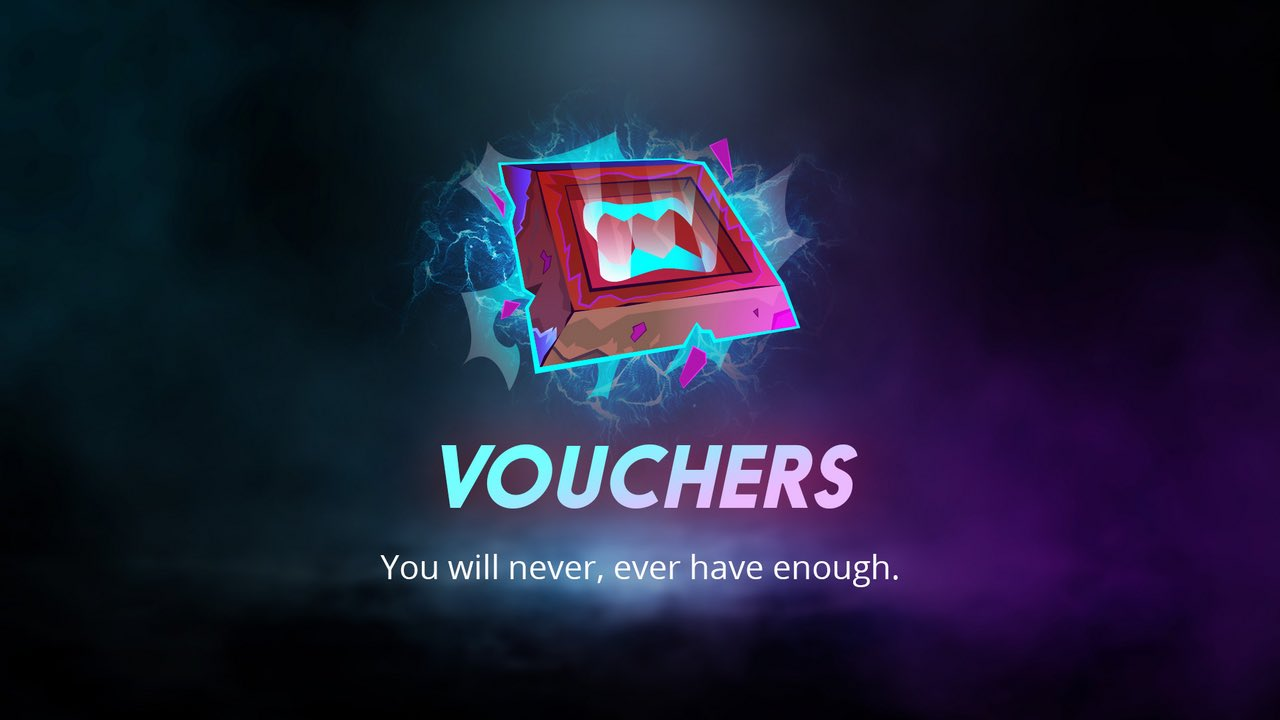 Now that chaos legion is out, and I have finally been able to make my investment in CL packs (see H for a series I'm writing tracking that investment), I've started looking to my next big investment. One of the things I really like about Splinterlands is the many options I have, which, while correlated to one another, are able to move independently depending on the fundamentals: SPS, Land, Cards, packs, DEC, etc.

What I've landed on as my next investment, which I'm buying up slowly every day is vouchers. Read on to find out why I think they're a good investment but also why I could be wrong. Most of what I'll say has been based on things the Devs have said in various Town Halls. None of it has been in a white paper, so none of it is binding. But I think it is indicitive of how they are thinking. 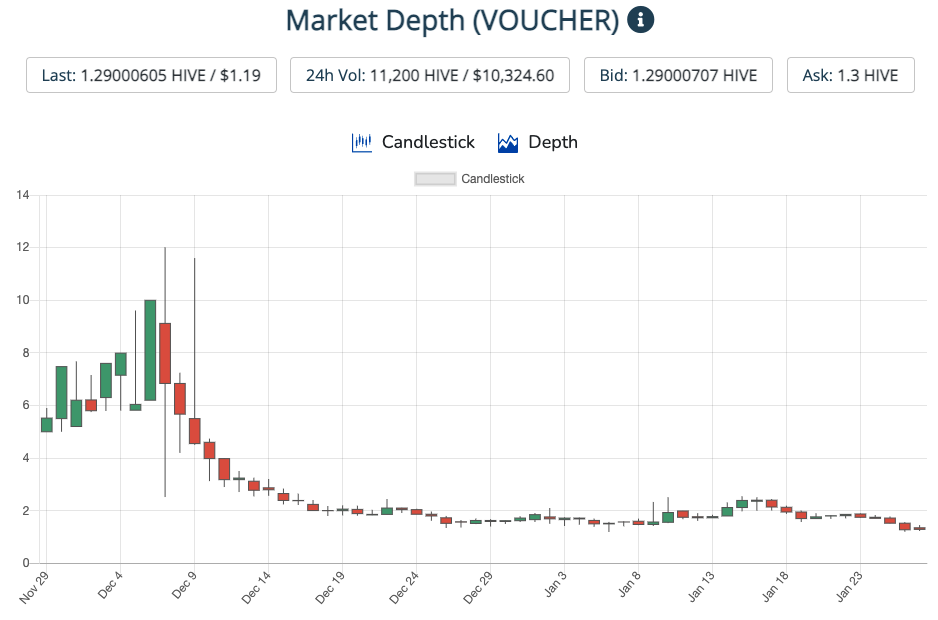 Throughout the CL release, I've been really interested in vouchers and their use. During the pre-sale, vouchers were in the $20s for a lot of the time, bottoming out around $14. The big benefits of buying during that time was 1) Dr. Blight 2) Legionnaire title, and 3) chance to design a summoner.

During Phase 2, Vouchers started pretty high, at around $15 I think, but quickly dropped down below $4 once people realized they weren't really getting that much for the voucher, just an airdrop chance for Uriel and Baakjira.

Now, during the general sale, vouchers started off around $3 and have tapered off to $1.2, which I consider kind of crazy. If you buy enough packs, Splinterlands will pay you $4 (in the form of a bonus pack) for a voucher, but people are selling them for $1.2. Granted, this is at least in part because I think most really big purchases have been made. People probabyl aren't buying 100 packs at a time very much, so demand is down.

Why vouchers are a good deal

So demand is down and prices on vouchers are down. But it's the potential upside that is making me want to invest in vouchers. We KNOW vouchers can hit $20, and that was even when we knew (except for people that were worried CL general sale would sell out instantly) that we wouldn't always need vouchers.

For Riftwatchers, the Devs have said they'd like 100% of the set to require vouchers. In addition, there will be much less supply of Riftwatchers (I think 1.5M, 1/10th of CL, but I'm not sure where I saw that).

So riftwatchers might be a case where there is 1/10 the supply, and every pack in it needs a voucher. If so, the demand for vouchers when riftwatchers comes out will be a lot. This huge demand is gonna pump up prices.

There are a couple reasons why this might not pan out.

Overall, I think vouchers will appreciate nicely in the lead up to Riftwatchers. I think it will appreciate more than SPS, as we saw in CL release that vouchers remained expensive longer than SPS when people realized how few vouchers they'd get each day per SPS. Whether I sell them or use them to buy packs is another question, but in the meantime, I am buying vouchers with leftover earnings as long as vouchers are so inexpensive.

Like hearing about play2earn games and splinterlands? Give Splinterlands a shot! Use my referral link below, and I'll send you 1000 DEC (~$3) and delegate you some cards to use your first season if you DM me.

That could really be a good move - but there is some risk involved. Vouchers could definitely rise for Rift Watchers. But it is not clear yet, how many vouchers are needed to buy packs - and as far as I remember there was the plan, that you'll need SPS to buy RW packs.
Right now, for most people vouchers don't really have a lot of use - and it can take quite some time, until Riftwatchers will be released. Until then Vouchers are more or less dead money. You could put them into a liquidity pool with DEC to collect more SPS airdrop points, but that is almost it. If you use the same amount of money on SPS or DEC you can get higher airdrops or staking rewards.

Don't get me wrong. I am not saying that vouchers are a bad investment or it is a bad idea in general. But the usability is pretty limited right now and for the time coming, while other assets have (in my opinion) more value - and are also quite cheap.

No financial adivse though.

Thanks for your thoughts!

The limited usability of vouchers is definitely a negative. Unlike almost any other SL asset, they don't do anything sitting in my account.

BUT, I think this is part of what is driving the big value proposition. Everyone knows this, so no one wants to be holding a bunch of non-value-generating tokens. Hence why vouchers are so cheap.

So you're right, a lot of things are low cost at the moment, but I think relative to their overall value, vouchers are even lower, giving them a bigger upside. Moreover, I think that upside is going to happen soon (TM). Riftwatchers is just a few months away, whereas CL packs are not on track to be out of stock super soon. Land will probably come out soon and pump those, but I'm not expecting 10x returns on land (barring a lucky land reveal for a plot) because land is already 20x from what it sold at.

So yeah, it's a gamble, but I think one that will absolutely pay off. The only questions to me is whether the payoff will be 2x or 10x, and when will it be (probably RW, but maybe earlier if the store has some good stuff)?

That is really true. Everyone knows, that the usability is limited. And probably you're right, that they are even low compared to other assets.

I am just not sure, if they can make it back to the $15-20 range. If Rift Watchers drops mid to end of this year, there are going to be tons of Vouchers available - let alone if it's going to be 2023. I am not sure, if there is already a release date. Regarding CL Packs - yeah, we're only half way through. This was definitely not expected by most people a few months ago. But with the general bear market in crypto assets, this is no surprise. Bear markets are usually very difficult. Are CL Packs going to be worth 10-20x of what they are now? I don't know.

Land is already expensive, that is true. I think that at max it will have 3x from the prices right now. But maybe less. I am betting on cards right now. Has the advantage, that I can use them while waiting for prices to appreciate again.

I think that vouchers will be more valuable the latest with the advent of RW - probably as soon as the rumors get bigger. So it is most likely a good strategy!

Have a great day
@andy-plays