Top 20 Bronze as a Newbie possible?

With the recent changes in rewards for new players I personally think it got way harder to make progress step by step. To get DEC and Cards I need more power, means I should use DEC to rent cards to unlock higher Tiers - means I should spend more to maybe get more.

Believe me, I can totally understand the move of the devs in that case, too many bots and people with x-amount of alt-accounts (that is one of those things that I never understood, but this is probably because I have the wrong viewpoint on that topic - if people can make money they try to do so -> greed kills fun - I don't want to go into details about that topic but you can see it all around with some gaming companies and AAA titles... and it is not getting better)

Actually I wanted to take it slow, earn cards and DEC while doing daily quests, learn more about strategies and different cards/summoners. Now that things have changed, and I have to admid not that I want to, but deep inside I am still a very compeditive person, even tho I try to avoid to release the inner me as much as possible. Is this a good or bad thing? - I actually don't know, but it costs me some amount of energy if I do it.

So that is why I am going to try to make it to the top 20 in the Bronze League this Season. Is it possible? No clue, I can feel it is getting harder and harder and some of the cards of my opponents are just wow! Also the amount of DEC some of them get for a win - hey hello there! - and that even without any special % bonus, still wondering how they do it, when their Capture Rate is only at about 50%. I would really like to know the secret behind that and I would be more than happy if anyone could share that information with me :D

There are still 7 days to go - I have no special strategy, learning a lot when I get destroyed, trying to avoid making the same mistakes twice. To keep it short, actually I am having a lot of fun, as long as no Summoner with 3 abilities is comming along - haha, nah just joking, this is part of the game if you try to swim in deeper waters with biger fish. Playing a water strategie works actually good until a certain point, but I found out if you try to be a bit creative from time to time even tho I don't have the most amazing cards, it can bring you some victories vs cards where you don't expect it. If you don't take it always too serious and just have fun and play a bit "silly" it also feels less grindy that way.

With the battle push in the last 3 days I nearly made it to my first personal goal of 500 DEC, but of course a Season Reward of 2000+, oh this would be something sooo sweet. This is my third season so far, just in case if you wonder about that. I did not rent any cards so far and did not do a lot of research/ got information about that really to be honest, but sooner or later I should do that, the more Season Reward Chests the better, at least most probably if you are in the favor of the lootgods or RNG is your friend.

Maybe we see us in the Arena, happy battling and have a great day! 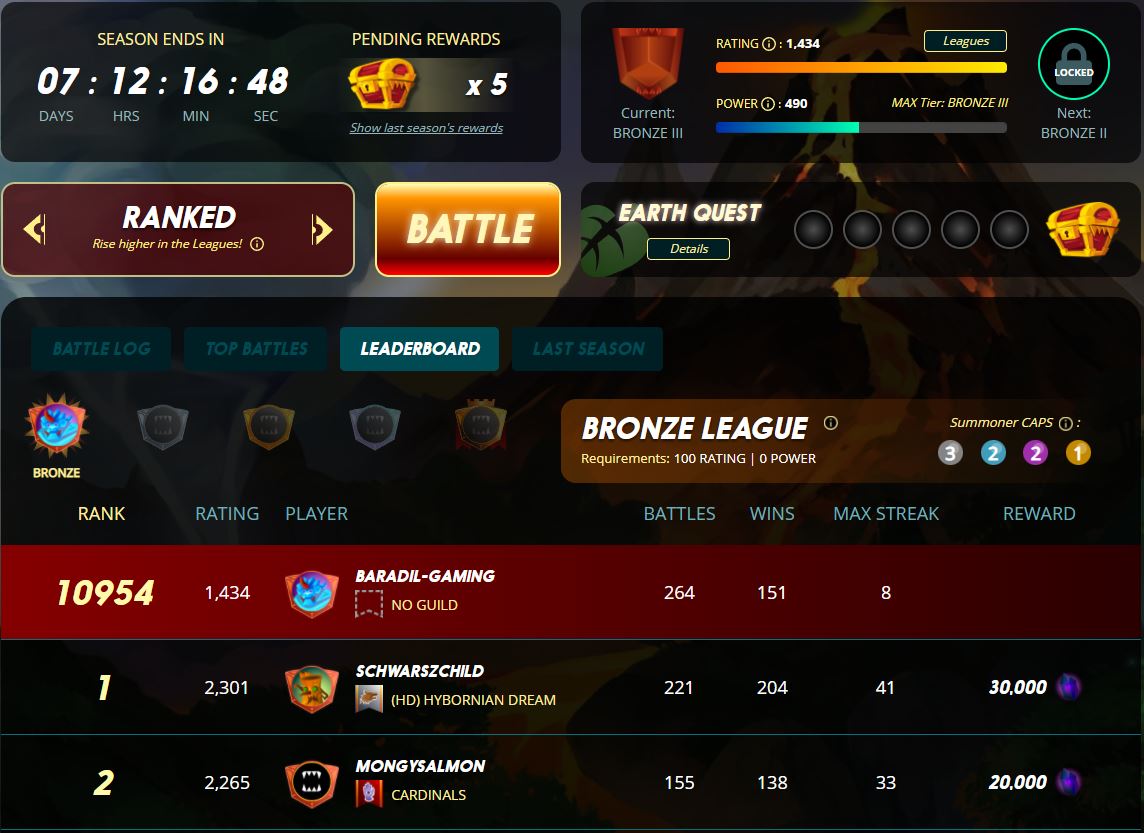 Congratulations @baradil-gaming! You have completed the following achievement on the Hive blockchain and have been rewarded with new badge(s):