Hello Everyone! Retaliate is one of my favorite abilities when it comes to Splinterlands dynamics and strategy. In the battle that I am writing about today, Retaliate was the key to a close victory by my Yodin (although I must say that blast was essential as well). This was a Diamond League, 18 mana battle with the “Aim True” and “Lost Magic” modifiers. Although I am definitely not an expert at Splinterlands, I will outline my strategy/thought process below in the hopes that maybe someone will learn from my successes and mistakes.

In Splinterlands, the two main things you can control are your lineup and card positioning. In my deck, my strongest Splinters are Fire and Dragon, so Fire was the easy choice here.

Additionally, my deck consists primarily of leveled-up, high-mana legendary summoners (I’m still working on leveling up my low-mana Untamed summoners),so although I would have preferred a lower-mana summoner, Yodin Zaku was the best choice. Yodin’s blast is a super useful ability when it comes to ranked battles. Additionally, the additional health and ranged damage can be used to your advantage to get a step ahead of your opponent before a shot is even fired. 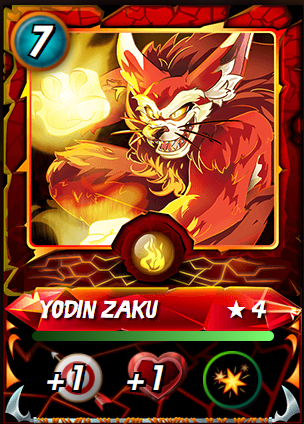 With Yodin selected, I only had 11 more mana free for monster selection. One of my favorite tanks for the Fire splinter is the Beta monster Cerberus. Although my Cerberus is only level 5, I have found that having both the Heal and Retaliate abilities is often more then enough to help you win battles. Here’s the hero of the battle. 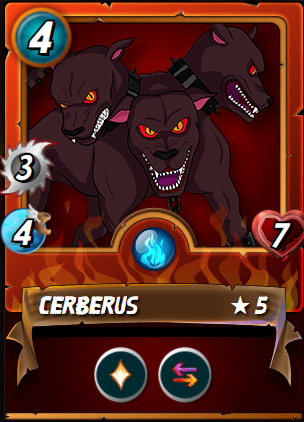 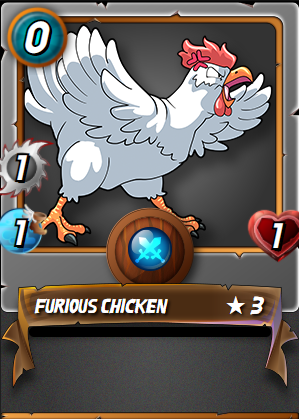 My third and fourth monsters were Goblin Fireballer and Ferexia General (in that order). I choose these monsters for a couple of reasons. First, they’re both ranged monsters, so they gain a bonus from having Yodin as the summoner. Second, Goblin Fireballer has stun, which can have a huge impact in a battle by preventing the enemy’s first position monster from attacking our Cerberus. Third, Ferexia General has the Snipe, Inspire and Shatter abilities, which means he can hit behind the enemy tank (doing blast damage to two other monsters in the process), gives a +1 bonus to Cerberus’s attack, and can destroy the armor of whatever monster he hits on the back line. I have found that armor can be a problem to overcome in low-mana battles, so any way that we can reduce that enemy advantage is useful. Finally, both of these monsters were at max level (which allows us to take full advantage of the diamond summoner’s cap and our maxed Yodin). Overall, I wasn’t sure how this team would do in battle, but I felt that it had the best chance to be successful with respect to the cards I had and the restrictions of battle. 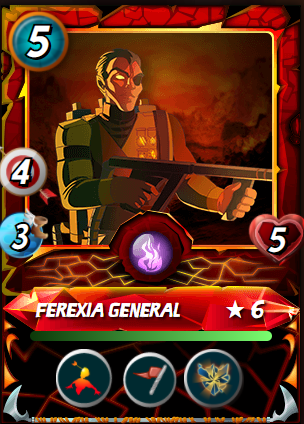 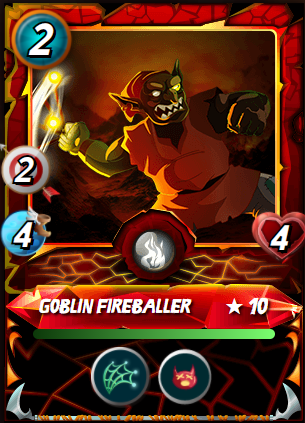 Our opponent (shout out to @Monsterdreams) decided to select Earth splinter with _ as the summoner. When I saw the high level Earth Elemental, Screeching Vulture and Stonesplitter Orc, I became immediately concerned. Earth Elemental can be a challenge to deal with due to the monster’s natural Heal ability. Screeching Vulture can be tough to handle due to the combination of scavenger (gains 1 max health each time any monster dies) and Opportunity (can attack the monster with the lowest health). This combination in a battle with a large number of low health monsters can be lethal. With Stonesplitter Orc, I was concerned that the combination of Retaliate and Enrage (increased melee attack and speed when damaged) would be enough to punch through Cerberus. Brownie, Swamp Thing and Furious Chicken weren’t major concerns because I figured Yodin’s Blast would handle them once Ferexia General was able to have a turn. Anyways, let’s see what happened! 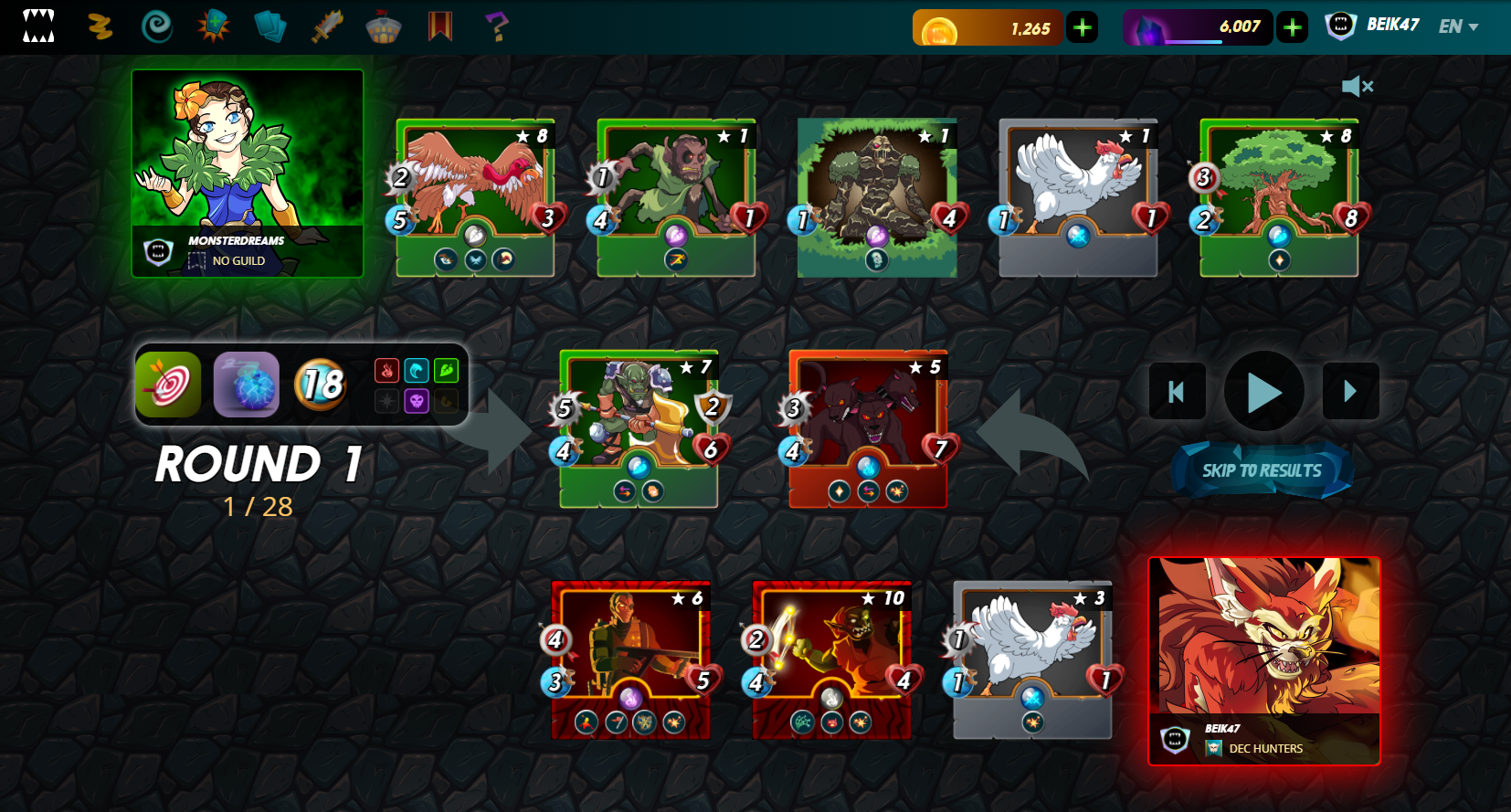 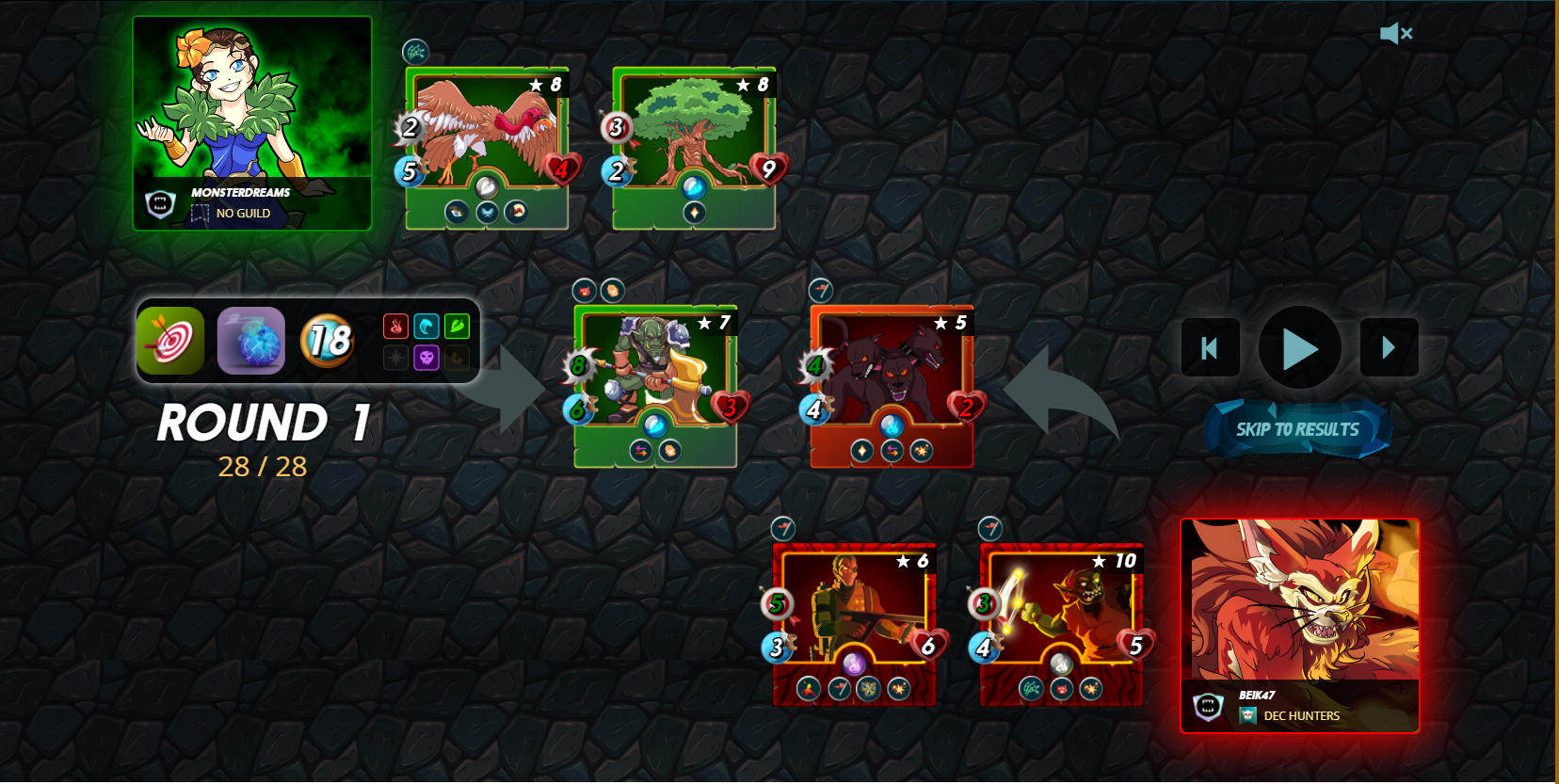 Cerberus followed this up with his attack, then Ferexia General snipped the back row, killing Brownie, Swamp Thing and Furious Chicken. This attack evened things up, but gave Screeching Vulture most of his health back. 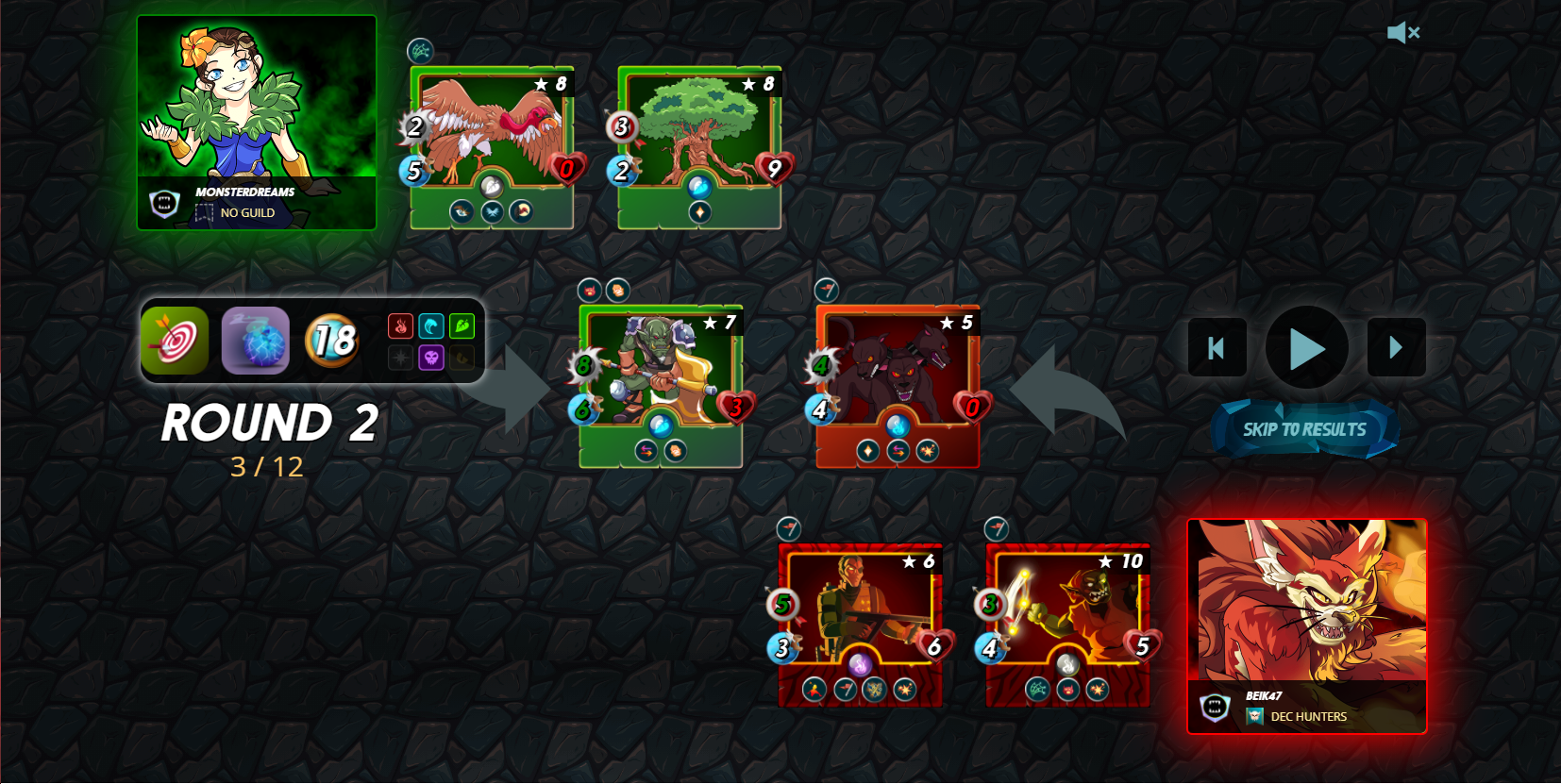 This was the moment the battle turned. Screeching Vulture hit Cerberus, dropping Cerberus to 0 health. 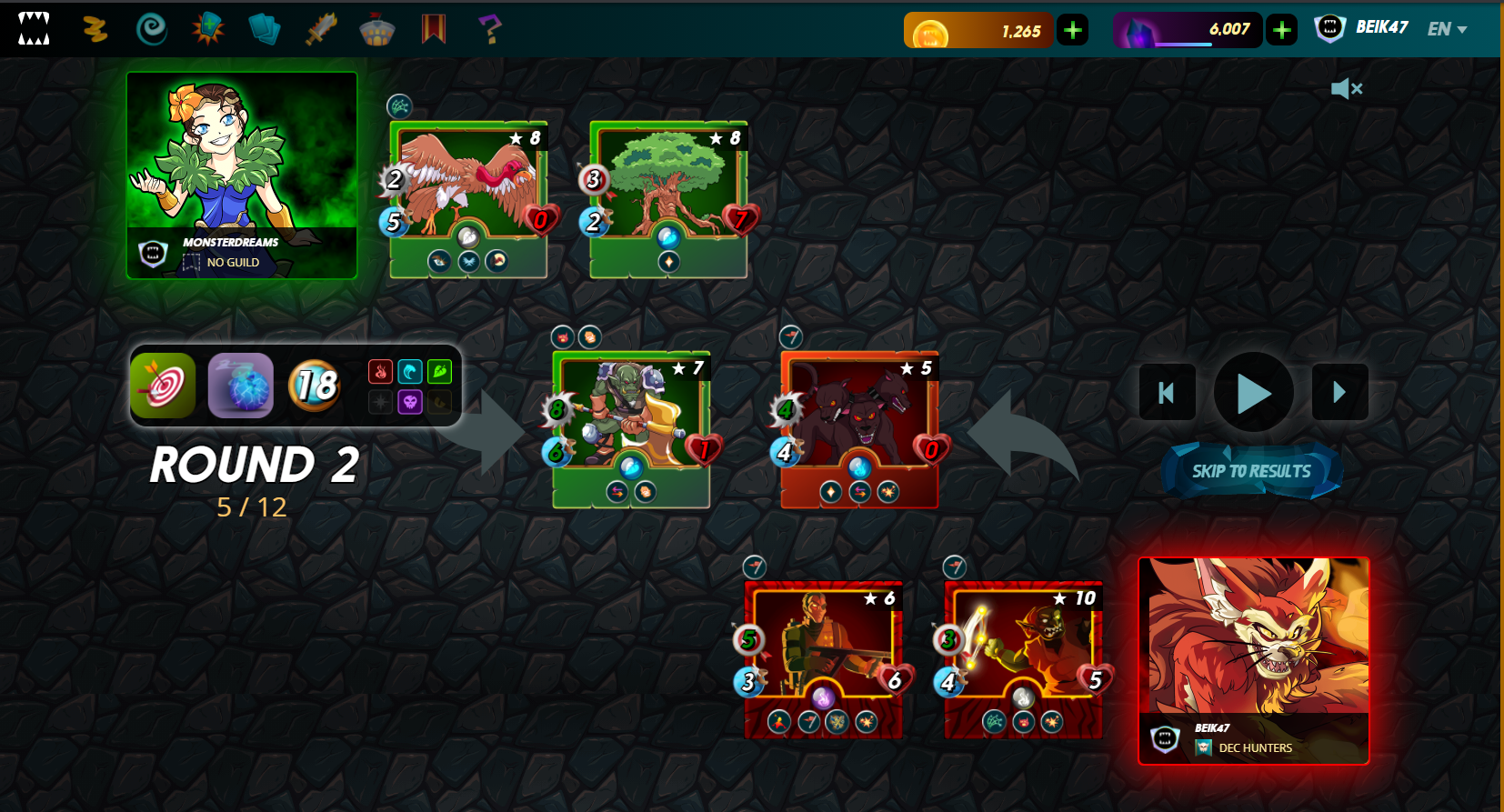 Cerberus, being the boss that he is, retaliated and not only destroyed Screeching Vulture, but also did significant damage to the Stonesplitter Orc. This damaged allowed the blast from Ferexia General’s attack to kill Stonesplitter Orc, sealing the victory. 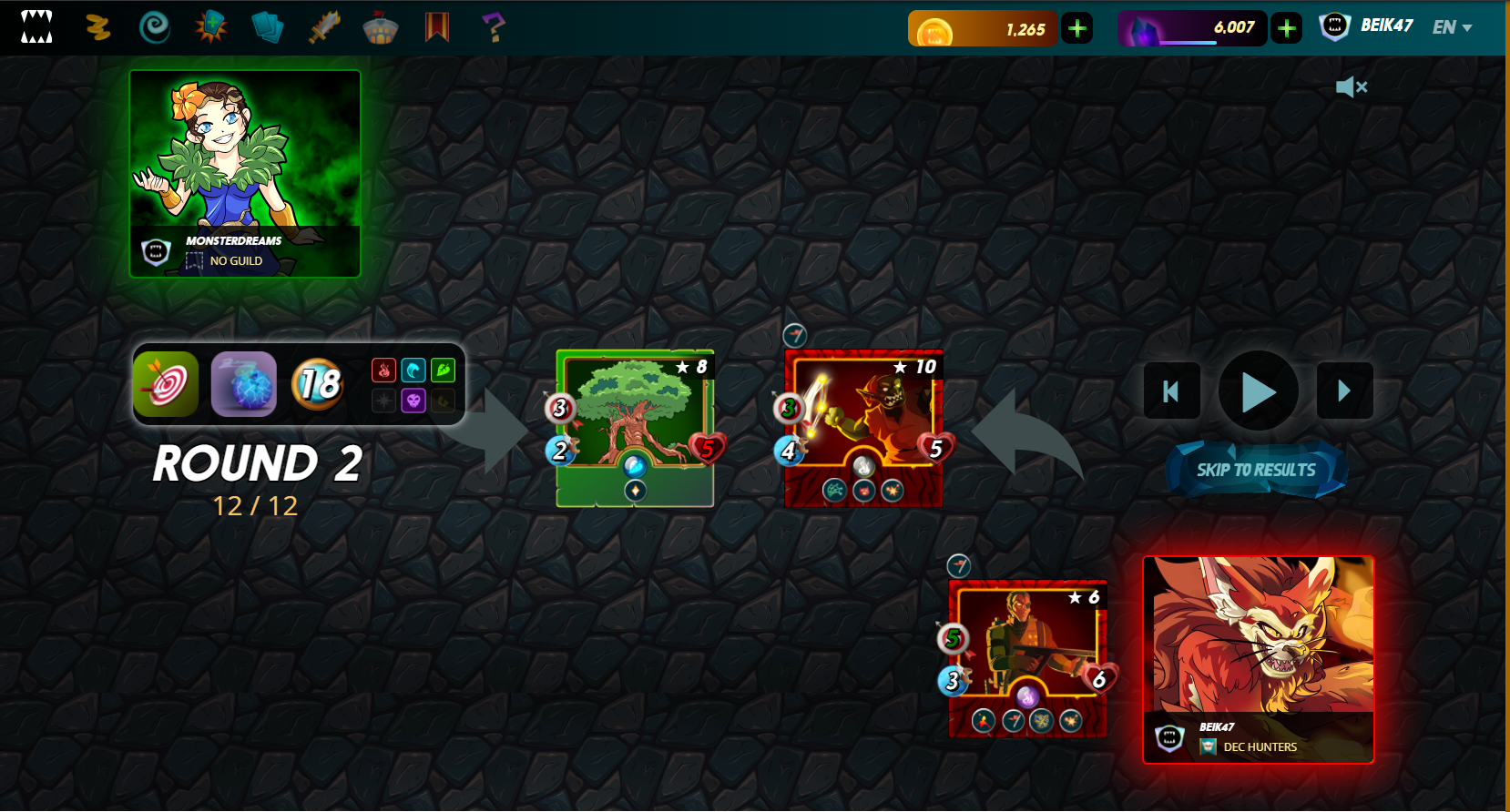 This battle could have went multiple ways, but the retaliate from Cerberus was key I allowing a positive outcome. I hope you all found this battle exciting and informative and if you haven’t tried Splinterlands yet, feel free to use my referral link below!

Have a great day and good luck finishing out the season!