Chaos Packs and Vouchers Are Here!

@bitcoinflood 75
about 1 month ago
LeoFinance

Chaos Packs and Vouchers Are Here!

Well if you've been following along you'd know I've been ape on Splinterlands as of late. Well that moment many of us have been waiting for has come! (I honestly thought it wasn't for another 12 hours but hey I guess I won't be getting any sleep now ;) 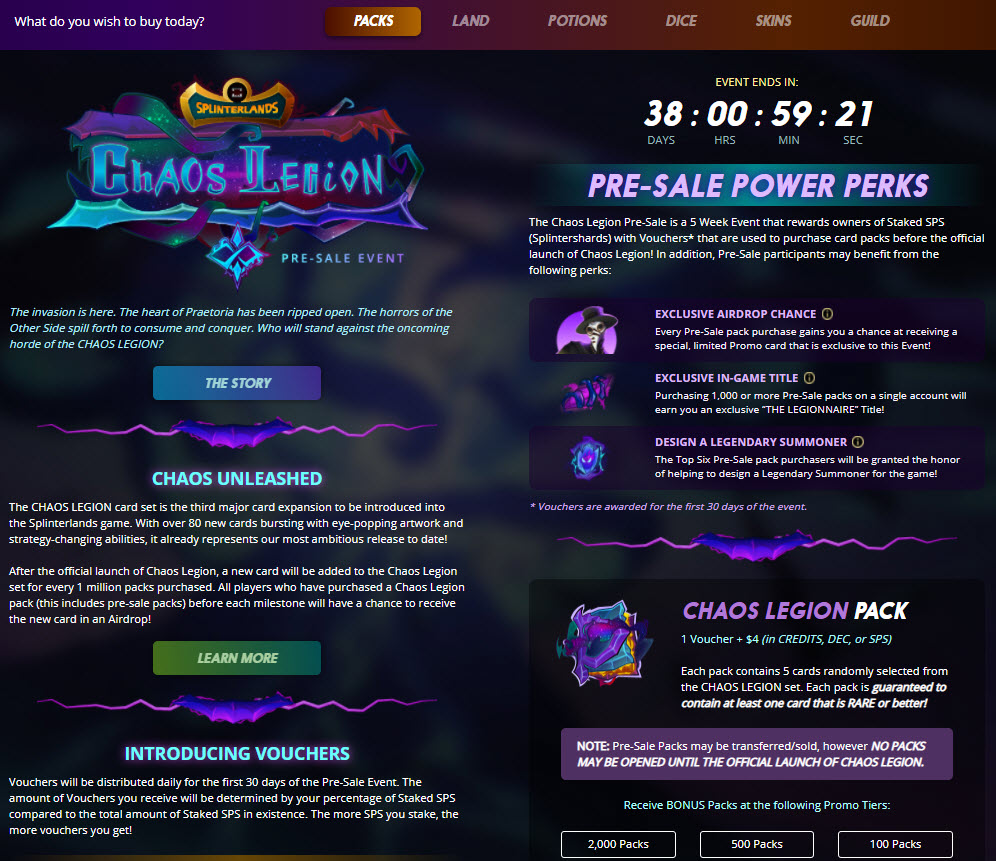 The Benefits Of Buying Packs with Vouchers Now

There are a few but very powerful things happening with vouchers and pre-launch Chaos packs and they are as follows.

It's still unknown to be if vouchers will be released after presale or if packs will open to everyone at $4 a pop and be a free for all. If it's a free for all I'm going to be honest I see it selling out within a month if not much sooner. Sure 60 million sounds like a lot of money to buy packs but when you've been gaming in crypto on blockchains such as wax ect you quickly realize it's not a lot and often times that is a single day of transactions. In fact just the other day someone bought a Splinterlands land asset for over $700,000 so $4 a pack you're talking 175,000 packs sold in an instant without batting an eye.

This is why I think there will be some type of limitation or release so one ultra mega Splinterlands person doesn't get them all and list them on the market for stupid crazy prices. Sure that sounds great for that person but it has a very real potential of crashing the game into the ground as people just can't get their hands on the assets. I have a feeling SPS value on accounts might very well determine how many packs you can buy each day weighted in some way. *Total speculation right there

Chaos packs sell for $4 each but you also need a voucher during this presale. As of writing this a voucher is currently going for $21.16

What I really want to point out though is that $21,000 worth of vouchers has already been transacted. Not only 33,333 total vouchers are up for grabs so far as it's the first day. This means already 1,000+ vouchers have been sold (around the $20 mark)

We are also seeing packs go for sale themselves (however note you do not get the bonuses when buying packs on the secondary market. You only get the above perks when you use a voucher and buy it for $4 from the shop.

Again this is pure speculation anything could happen. This is my best guess based on following the gaming world and other crypto game launches or anything launched in the crypto space.

The first few days 72 hours we will see price pumps (and some dumps when new vouchers are released each day) But primarily an upward trend pushing Vouchers to $30+ after which I think we will fall off and come back down perhaps $10-$15 range it's super hard to tell right now though. Of which we will stay around those levels until the last week. The last week I foresee a possible pump but it's going to really matter what the Splitnerlands team announces if vouchers are going to keep being dropped and if so how will they be dropped to players for after prelaunch. Once we know that we can start to take an educated speculative guess.

*This article is not investment advice. Do your own research and understand the risks when investing. This article is for entertainment purposes only.

I might have the record for buying VOUCHER at it's highest price. And dammit, I'm proud of that LOLOLOL

This is gonna be a lot of fun!

lol I didn't know that vouchers would only be on Hive I thought they would also be tradable on Wax. Being that it's only on Hive it's going to diminish the exposure of vouchers and most likely come in at a lower $10-$20 range now sadly. We will see though.

I did not know you design Vannamor’s summoner ! You must be thankful you put this “big” amount during the Kickstarter hehe 😉!

Seeing how it pays odds now.

The voucher system is great for tokenomics but make it very difficult/expensive to get a lot of packs. Let’s see if the voucher price settle down. What price would seem a good proce to you?

Yep Bought that like 3 years ago now? or close to it lol So it's a long term hold but it's for sure paid for itself. It's why I'm constantly telling people stop thinking short term. Buy low cost assets and wait it out. Some will fail but the ones that are successes should be outbeat by the ones that perform.

Insane the price of vouchers! Sadly I only got dropped 0.186 so far. I might have to bite the bullet.

Yeah the one issue with this voucher drop is how centralized it is. I thought I'd be sitting on stacks and I only get a few a day. So there has to be just a few very heavy hitters in the game right now that are just gobbling up 1,000+ vouchers daily

@antisocialist 71
about 1 month ago

Welcome to proof of stake, eh?
Good, if you have it, less enthusiasm if you don't.
I was hoping for more than one a day, too.
I might get one every 4 days.

30 bucks is crazy for vouchers imo. I'm due about 300 over the month but will sell all at this price. Thats 9k if the price holds and buy 2200 packs at xmas or if the voucher price drops to a couple of dollars buy back and get the 1k packs I want.

People must be crazy because we selling at $25 a pop right now lol still my lower end but perhaps there's not a big demand yet because you can't actually open the packs. If they do this again I hope it's still SPS holders again as it should be but also that they can be opened right away to create a bigger buyer frenzy.

I'm unsure of how $4 packs will go in the future after presale. I'm thinking there still has to be some type of voucher system in place otherwise you're going to have a few big jerks come in buy up everything and list packs for 1,000% mark ups which is what happens in other games.

What I've seen to somewhat help combat this is to only allow an account to buy one new pack every 15 minutes or so. But I don't see that working for splinterlands being that you can buy packs in stacks for better prices. So maybe a faster voucher drop? Every 15 minutes you get a voucher or the ability to buy a pack. No idea lol but it's going to be interesting.

They have said that they will put something in place to spread out the pack sale even more after the first month is over.

They will need it as the packs will be gone very very fast otherwise. So much money in the crypto space at the moment and with gaming being the hot topic it is easy to see whales jumping in.