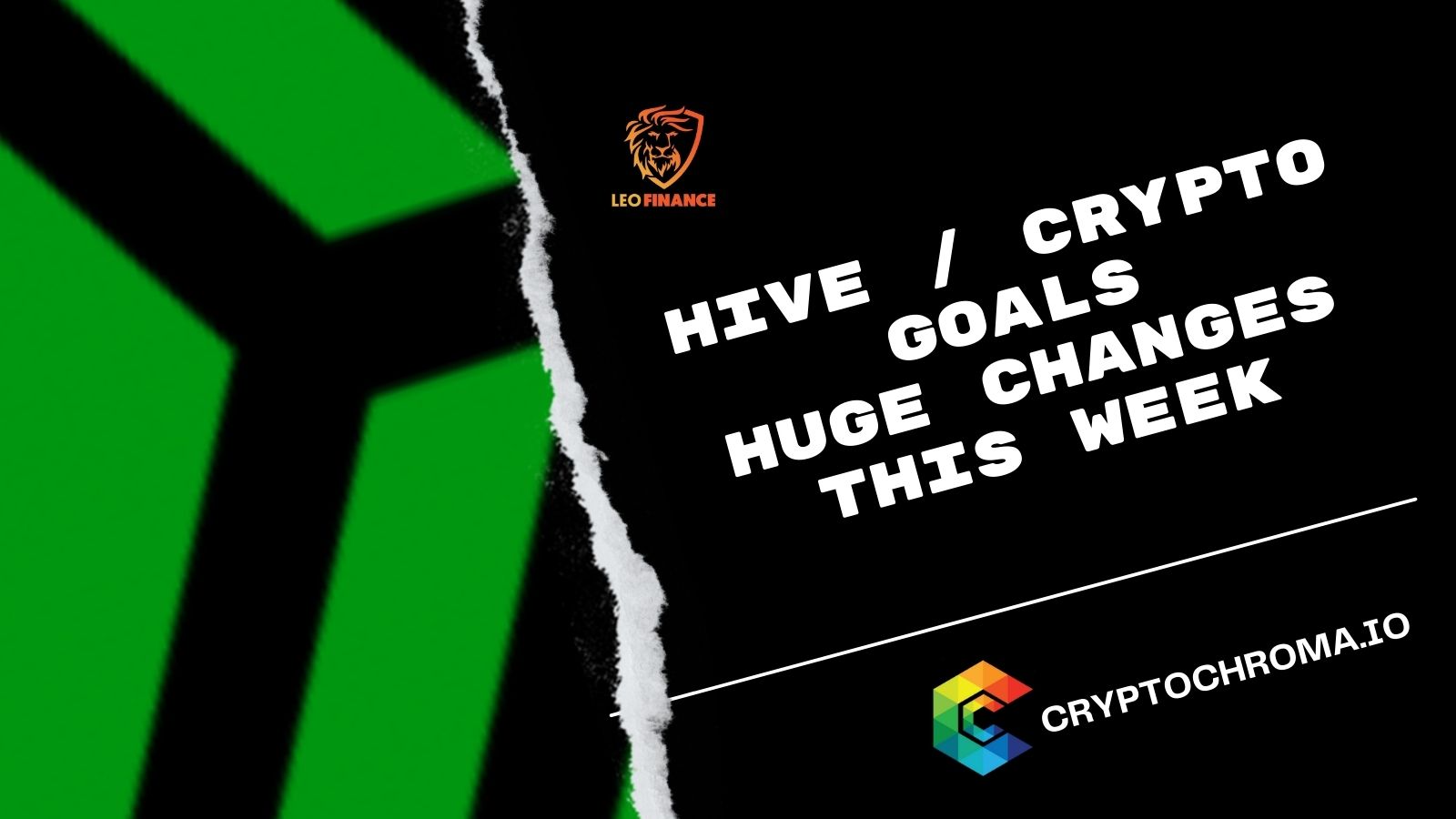 I always disclose this post with a disclosure that I do these posts not to rub it in anyone's face but instead show what is possible with time commitment. Mine to LEO has grow significantly this week and I'll highlight those changes below. I also don't disclose everything there are some projects where my wallets are not public that I simply don't add to the pile and instead only disclose the ones you can see publicly on hive.

Highlights From This Week

This number jumped on me a bit but not as bad as I would have thought. The increase in articles including better backlinking to other posts and more focus on SEO and writing on popular and trending type articles for social promotion has started to show some rather nice initial thoughts. I'll explain this move more in detail under the LEO section.

Within the next month or two I'll also be converting my WAX earned into Hive (depending on prices etc at the moment) as right now those are strictly locked up to be focused on buying Splinterlands cards and packs while the prices are low and maximize the decks. I'll also go over some Splinterlands strat changes below under that section.

I've also started stacking my HBD again as the interest on it feels on par with low risk at the new 15%APR and the possibility to 20% in the near future. While I believe Hive is priced low at the moment and most likely will jump 10%+ during the next rally this year it's still a riskier move so I'm going to try HBD for a little bit here.

My daily has fallen by about one which isn't huge but it's moving in the right directly. I made some big moves last week by delegating a lot more HIVE to the leo.voter which will buy LEO off the market and provide it to my account. This drastically helped to get me back on my LEO goal.

My initial goal was to start taking profits from CUB and Polycub (soon not yet) and convert it back into LEO to quickly build those stacks. However with both of those prices falling dramatically I've decided to just play the Hodl game for now and continue to build those stacks.

LEO will also be getting a new upgrade. Ad revenue will soon be given back to LEO holders and the rate seems to be 4% or better. Which means my current stack of 45k+ would net me around 5 LEO per day passivly at least. Might not sound like a lot but that's $1+ a day in passive income.

Since last year Splinterlands has continue to be one of my largest passive income streams and while I should have taken some early profits I have a feeling we are simply in a low point right now in terms of the hype value. That will change Q4 and the start of next year when land starts to be activated and more aspects are added to the game. There are also two new packs going to happen in that time frame including one that is SPS only to buy much like we had DICE packs in the past.

My goals are to simply stack and buy SPS at these low prices until I hit 1,000,000 SPS. The vouchers generated from that is a huge asset value and I believe it will only increase when the voucher store, new promo cards release and more!

We also got a roadmap for Splinterlands. However take note this roadmap can change at any point but at least we get a feeling for what is coming and when. 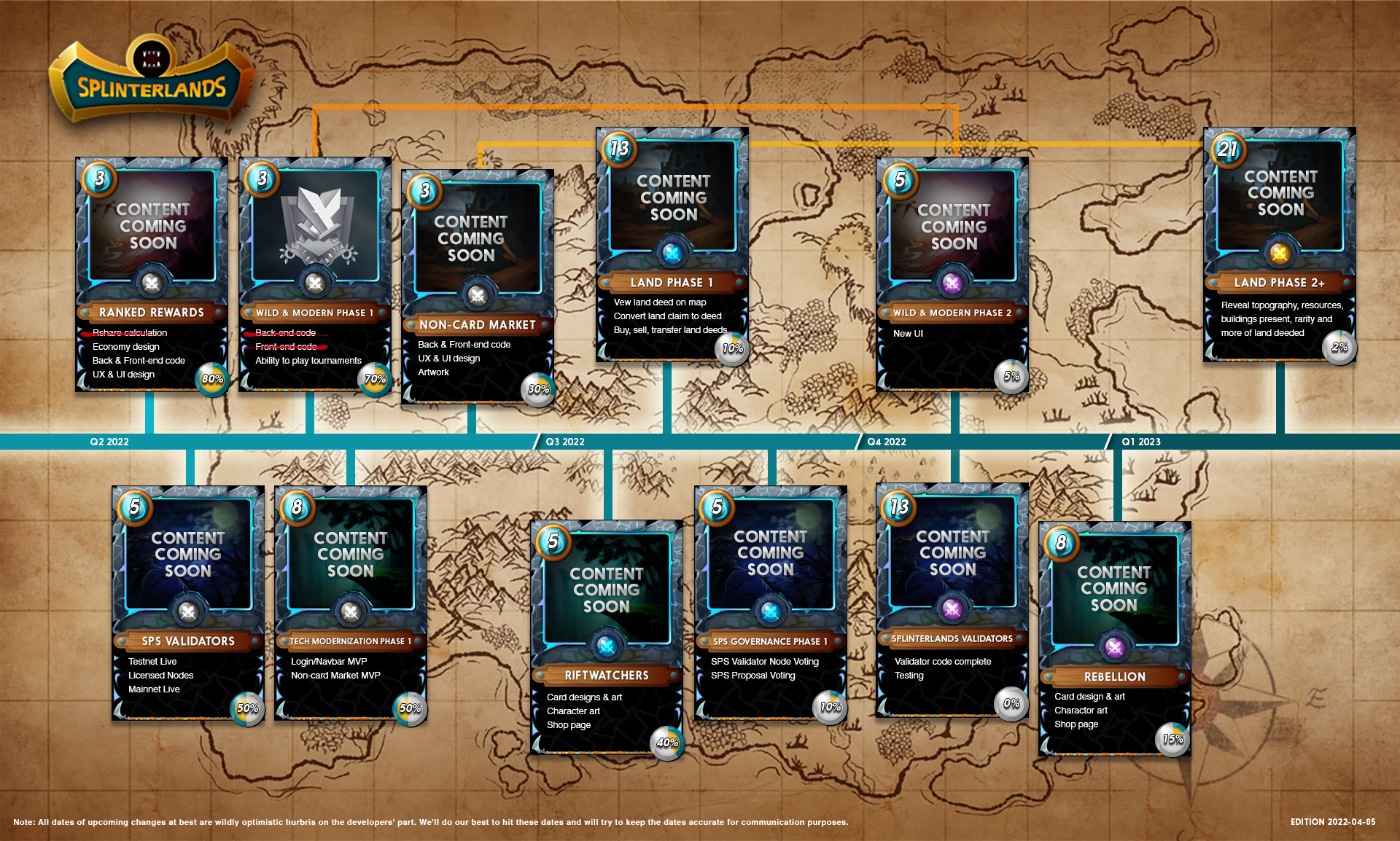 Nice goals, man! I have one big goal in the notebook, but all of yours are huge! Respect and good luck with reaching them!

I'm with you on every point of this.

My initial goal was to start taking profits from CUB and Polycub (soon not yet) and convert it back into LEO to quickly build those stacks. However with both of those prices falling dramatically I've decided to just play the Hodl game for now and continue to build those stacks.

My plan is the exact same but on hold until the prices rise. Looking to get to 100k Leo and cub using profits from cub to buy Leo.

Splinterlands is in a stacking stage right now and will be until ether cards run out or land drops but until then I just keep buying and stacking rewards until they run out too.

Hopefully hive gets a pump along the way but it seems to be building nicely and with Leo going into a positive cycle could put more buying pressure on hive if it gets high enough.

Yeah, I just cant bring myself to sell at that low of a level. I rather just hodl and stack and see what happens.

There is no rush to sell at these prices and they are compounding the whole time so that when the price does get to a reasonable level then we will be sitting on a nice stack to work with and pull back into hive and leo.

Rethinking about setting goals and more focusing. I am not that much into Leo, i play splinterlands, and thinking about doing a little test of Leo.

Nice if you're into the finances and investing side of splinterlands it could be a good match up for you. But also just curation in general and the new ad system coming soon would also have benefits for holding the LEO token for you.

Wow, nice goals out there. I too have a HBD goals and I guess I have to finish that goal first than any other goal just for that sweet 20% interest rate.

I am not exactly doing Leo and Cubs/Poly but I am going with the same strategy you laid for them.

Thanks for all the information. It is posts like yours that really help me understand the Hive more and maore.

What are your plans for the HBD changes? Be curious to know how you plan on approaching it....Hive into HBD?

For right now any HBD I earn I'll be stacking. 20% gain is pretty nice but if Hive price falls to something like $0.80 again I'll most likely convert it all. To me I see it rallying over 20% from that point and also I still get like 10%+ in hive earnings plus the rally giving me faster profits.

I'd love to have a sizeable amount of HBD to actully "earn" something decent I could cash out on but I see that taking way too long and who knows if 20% will hold. If I had something like $25,000 or so I could put in it I most likely would lol

500k in HBD would give us a 100k yearly income from interest lol Oh the dreams!!!! one day lol

Yeah the 3 days power down is sketchy for big sums. lol

Your plans are well thought out man, I see myself putting more on HBD if I have a large amount like 100K.
This is my goal as I see this being enough to live a normal life at the start. Am young so I think feeding myself with that will be okay to start with. I was okay when HBD was 12% APY and I thought 100K will do well there, but this new 20% is just building more attention to get the HBD at 100K faster.
It's something stable and I can access it comes every month, believe me, once my wealth reaches 100K I will convert everything to HBD.
I am prepared to start all over again but with a sound mind that I got this one to feed me well.
Well at the end of the day, it's just me

oh before I forget I came through listnerds

Welcome from listnerds! Loving that platform for some extra promotion.

Don't ever apologize for being successful. Everyone has the same opportunities on the blockchain.