Things To Consider About SPS and Choas Packs 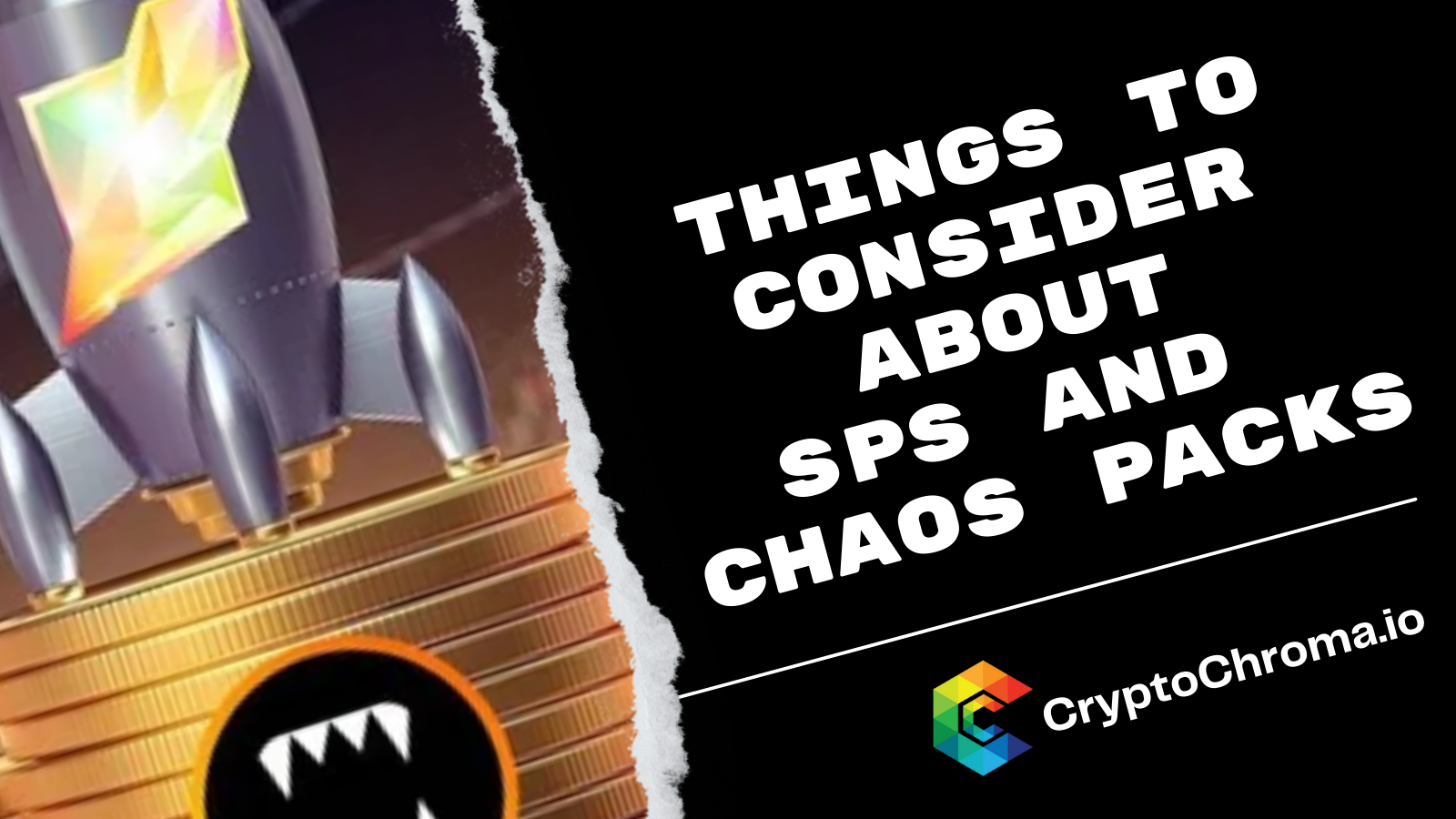 Things To Consider About SPS and Chaos Packs

A lot of hype is currently in the works with the SPS price and Chaos packs about to release. In this article I'm going to go over a number of things I think are important factors to consider when Chaos packs drop and how they are going to change up the entire market.

- Half Value DEC Burn on Cards

Cards within Chaos will have a DEC burn value half of that of other cards as the print on them has increased due to a huge explosion on new players. This is what we currently have seen with reward cards as their DEC burn value has been reduced as more are printed. This gives beta cards etc a little more value to them which I love and feel holds true to rewarding early adopters of the game without destroying new players or old players.

Chaos packs themselves will hold a 300 point airdrop value which is the equivalent of 300 DEC or 150 DEC in a liquidity pool. This will add nearly 10 million points into the pool each day in addition to all other points currently being added daily.

SPS token is in high demand already as people are stacking up for vouchers. If there's one thing I've learned however is that most wont enter until it starts happening. This is why I feel we will see a drastic boost in SPS value in the first week and it has the potential of increasing because of another factor.

As more and more people start to pile in on the presale where they finally can get their hands on chaos packs it means SPS airdrop tokens are going to start being spread out more thinly to more accounts. In order to keep up your air drop values you're going to need to invest yourself. Either in more SPS or boosting value into your decks and picking up packs yourself.

Per the white paper there here https://sps.splinterlands.com/rewards are still a number of SPS drops that will be coming and haven't been added yet. These are as follows...

A total of 20 million SPS monthly still to be added to what currently is getting into accounts
*These values are reduced by 1% monthly. They will officially end after 65 months

This goes to show you there's a lot of moving parts to SPS governance token and much more still to be dropped. However if you compare it to Axie you start to see how much more growth potential the game still has to go via partnerships, streamers, sponsors and so on. The games still only heating up and with the spark of Chaos packs in prelaunch and end of November opening packs is when I think this entire game is going to moonshot!

*Every attempt on correct numbers was made however there could still be errors and adjustments could be made at any point. If you know of any corrections please leave them in the comments. Also this article is for entertainment purposes only and is not financial advice. Always do you own research and take responsibility for your own actions.

@whatsup 76
about 2 months ago

It's really great to see the success of Splinterlands and well deserved as well.

I'm going to grab some new cards on the next drop.

With how other games are doing the potential of fun plus earnings is huge on splinterlands right now. Only two and a half months into the 12 month airdrop but you still earn SPS from many other sources if you miss out on the airdrop.

I agree with you with SPS, I envy people that hold up to a thousand SPS.

I am, am staking little by little

Oh man, the gift that keeps on giving...I have taken a dive and grabbed a couple of gold foils in the rewards cards but I must admit, having the burn rate cut sucks LOL

Next goal, get a Valnamor card that I learned about from you LOLOL

👀 Good luck on getting that card lol I'm rending my gold one out for 2,500 DEC per day (no takers at the moment but normally the last day or two in the season it gets rented.) 75,000 DEC burn rate though which is beautiful! I sold a few of the none gold off after I maxed it out about a year and a half ago. Damn I wish I would have kept it now instead of selling for $300 lol now they go for over $1,000 plus. Only 649 in circulation and gold there's one up for $6,544 actually much lower than I though after that it's $12,000 only 53 of those in circulation. Might actually the best deal right now... I love how while writing this I'm trying to get myself to go and buy it myself haha

When you mentioned it and I took notice, I think it was around that...$300 bucks...If I knew what I know now LOLOLOL

Or when land was $20 and is now close to $600 hahah Ah well we did pretty good anyways :) still tons of room for growth, profits and lots of fun.

Yeah man, no complaints here...I lucked out with land, but damn...Feel like I want more LOLOL

Lol. In a lot of cases I did know what I know now but still couldn't justify the expense in the moment.

Keeping this in mind allows me to cuddle myself after kicking myself in the ass for the stupid stuff I've done... like sell Plato for +/- $20. 😢

I won one and then couldn't afford to level it up as the price skyrocketed.

With half the burn value, it would mean that most people will also have troubles getting their collection power up. I wonder if they will change how people go up the ranks soon.

The numbers with this game just keep getting crazier. I can only imagine what land is going to bring. The fact that you're going to need monsters to run it is just going to ratchet up the hype that much further and keep the buying pressure on the markets.

I wish I had some "good ol' days" stories to tell like you two. Unfortunately, I knew myself well enough to know this game would have taken over my life for a few months if I would have gotten involved. Instead, I finally took the plunge in July as things started taking off. I was still relatively early but I only had a couple weeks before the top blew off. I DID manage to get PLOT at around $125 so at least I was smart/lucky enough to recognize the future scarcity then. I could really go for a couple of those legendary summoners though. I've almost got to sell the rest of my cards if I want to buy a couple....

Anyway, as long as they keep coming up with use-cases, SPS is going to keep going higher. I wonder if/when they'll implement a few ways to start burning it. There are going to be a LOT of them in circulation a couple years down the road....

I'll be honest I forgot about lands for a moment there as I've been so focused on SPS and Chaos. Lands are going for over $600 a pop and the 150 regions I see people trying to sell on wax for half a million bucks! lol it's so crazyyyyy $125 investment for something that has no use case yet and sells for $600+ sounds like a solid investment to me! I'm not sure if there will be any burn factor on SPS. You can use them to buy packs at 10% off but I think the company sells it back on the market for their income from the pack sales. Lots still to change and come so it for sure wont be boring.

Yeah, that whole business about getting a 10% discount would be great if they lion's share of people would be able to actually buy any. I mean, if you can manage to get 50 VOUCHERS then a 10% discount is 20 bucks. $20 is $20 but...I'd gladly do away with the discount if I could buy a couple hundred. I'm not really looking to pay $10 for a VOUCHER though and then another $4 on top of that. Especially considering what the circulation is going to be. 15M packs, right? Just doing the math....15M x 5 cards per pack is 75M cards. If there are what...50 new cards? That's over 1M copies of each card. It's hard to imagine you won't be able to pay $14 and get 5 cards you want for much, much less once they start coming out. Obviously you'd miss out on the tiny chance of scoring a legendary or two and/or possibly a gold foil that would pay for everything and then some instantaneously, but the odds are definitely against you. It's beginning to look like you'll need at least 4000 SPS staked just to get one VOUCHER per day....definitely still favors the early adopters.

Yep double what it was before so 15 million and 75 million cards (which will be combined). But there's some important things to take note of about how things went previously.

There were dice packs and untamed packs they both sold out very quick. They now go for $50+ a pop and fair game $2 or 3,000 DEC per Dice pack at the time. I can honestly see vouchers going for $20+ each easy since prelaunch has a number of huge bonuses. Slow limited supply and from what I understand even after prelaunch you'll still need vouchers that will be air dropped daily but at a faster rate and I think those go to SPS holders as well (not 100% sure on that part yet) but say it is then SPS has HUGE value in it right now even if you wanted to sell everything and not so much play the game. There are also far more players then there was when Untamed and DICE packs were around and most likely be another large explosion once these roll out driving up demand.

This is an excellent post. I can't wait to start minting my own NFTs.

The dynamics are totally incredible at the moment. I can't help to take some money out of the game at the moment, while at the same time trying to get ready for the pre-sale. The income from airdrop and staking will gradually go down for all players. The best way to get SPS will be to have a competitive deck and to play well in the future.

Totally agree in the next month or two we most likely will see a lot more SPS being dropped to activity players and higher competition along with more people fighting over packs thus driving everything up in demand.

Good info I was just telling @ivangeevo to make a research on the game it self and the game play.
Namaste 🙏

I started playing a year ago. By January my deck was finally worth $10, so I ranged back the spell book investment.

Then when that became $200 in April I decided to invest about 200 hive, just in time before the sps hype started. Now my splinterlands assets are worth about $4000 apparently… which is more than 60% of my crypto assets.

I’m really curious what the prices of sps and dec will do after the chaos legion presale is over.

I want to invest hard on Splinterlands, I just haven't decided if I'll go on the SPS route or the Cards route. So many good stuff to buy, so little money!!!