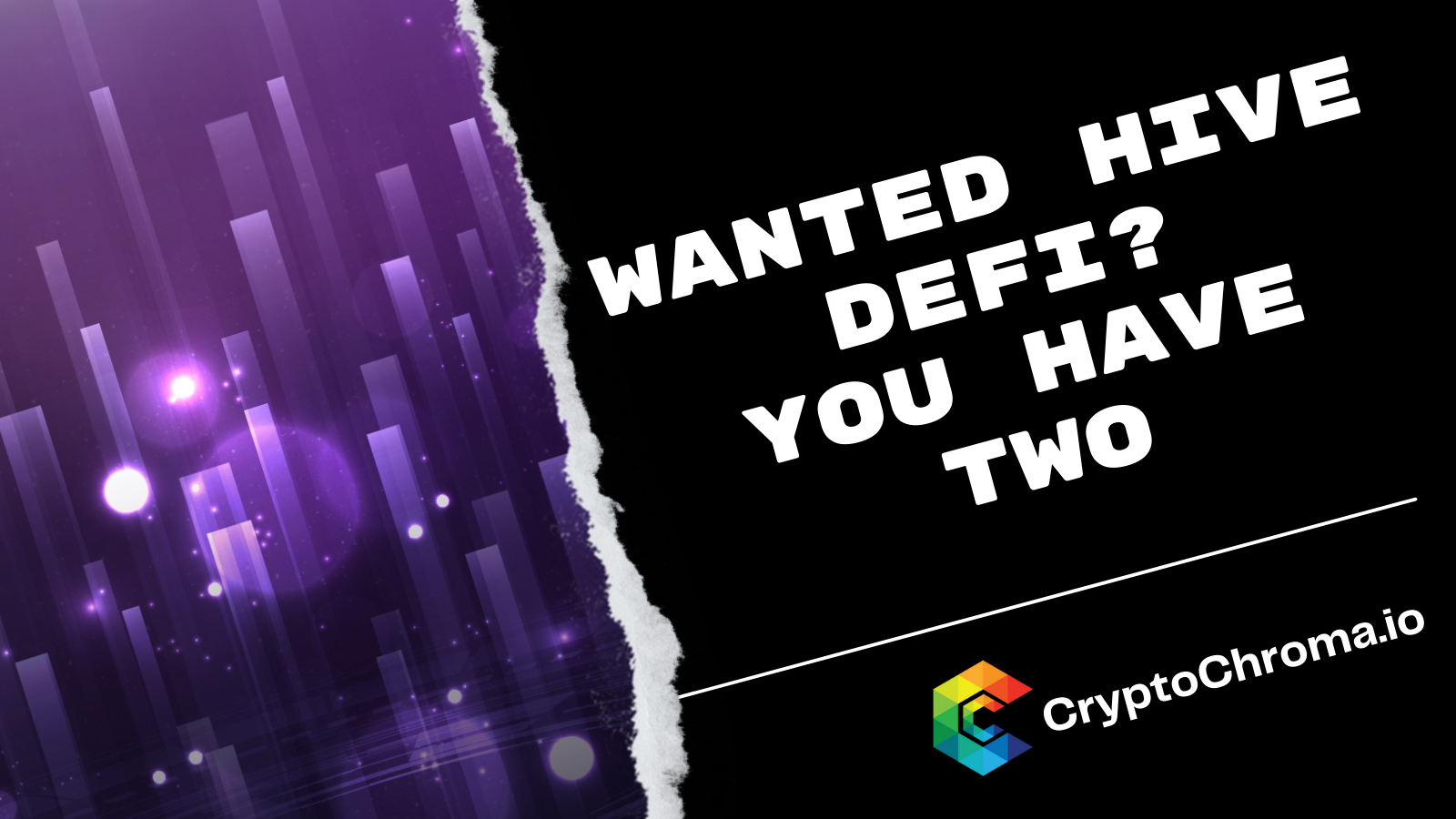 You Wanted Hive DeFi? Well You Have Two

There's been a little talk in the past and still to this day about Hive getting smart contracts and exposing itself to the DeFi space along with giving the token more utility options. While the genera DPOS system of Hive was way ahead of it's time the blockchain as of late is starting to show its age due to the lack of capabilities of the token. This is an area I hope and believe that the Hive devs are working on so more 3rd party devs can start building on top of Hive.

Until that time comes however we actually have two very real cases of Hive being introduced to DeFi. Below are those two tokens and how they can be used.

LEO is the community token of LeoFinance.io and works much in the same way as hive itself in terms of rewarding both posters/commenters and curators. What's really cool about the LEO token is it can be wrapped on both Ethereum and Binance chains. The most notable and wildly uses right now is bleo which is the Binance chain version of LEO token.

For this post I'm only going to focus on the Binance side of things and not Ethereum.

LEO token can be wrapped into bleo here: How to Wrap LEO into bLEO

This can be added into a Farm such as BLEO-BNB for what currently holds a 73% yield or you could sell the Bleo for a token such as BUSD and pair it with CUB in the farm CUB-BUSD which offers up a 127% APR at the moment.

The SPS token is the governance token of Splinterlands and let me tell you this token does A LOT! For this article however I'm only going to focus in on the DeFi aspect of it and that's with PancakeSwap as well as CubDeFi

I'm going to go into Pancake swap for this one however I highly recommend you read further into how to optimize this more via CubFinance instead so keep reading on. Pancake swap offers two aspects to it right now. The first is you can stake CAKE and earn SPS via their pool right now (this triggers once in a while and runs out so you'll need to watch it) However they also integrated SPS right into their farms.

Compound it even faster with CubDefi Kingdoms!
Compounding is known as the 8th wonder of the world and the power of compounding is crazy good. It can take a 60% APR and change it into 70%+ APR simply by taking your interest earned and adding it back in. Normally on DeFi platforms you have to manually do this and pay a fee each time. However with CUBFinance Kingdoms this is done for you automatic.

By placing your SPS-BNB pairing into CubKingdoms instead of directly on PancakeSwap itself you'll me making SPS and BNB as the Cake earned will be sold and bought into SPS-BNB pairing to increase your stake but also on top of that you'll be earning some CUB the native token of CubFinance!

A lot more than that coming. We saw the first transaction on the Hive SON take place yesterday.

SON ?
Tell me more about this !

It has something to do with PeerPlays.

The short answer to your question is:

The Graphene based blockchains (Bitshares, @Peerplays, Hive, EOS, Telos etc) doesn't have a decentralized mechanism connect to other blockchains. While chains like Polkadot is heavily focused on cross chain functionality from ground up and reaping rewards. The Sidechain technology created by Peerplays intends provide a solution for this particular problem. SONs aka Sidechain Operator Nodes provides decentralized, elected, DPoS like solution to address this problem.
source

This document explains few terms like the SON heartbeat and gives sample logs in few common scenarios. This is expected to handy for operators to monitor their network.

The Graphene based blockchains (Bitshares, @Peerplays, Hive, EOS, Telos etc) doesn't have a decentralized mechanism connect to other blockchains. While chains like Polkadot is heavily focused on cross chain functionality from ground up and reaping rewards. The Sidechain technology created by Peerplays intends provide a solution for this particular problem. SONs aka Sidechain Operator Nodes provides decentralized, elected, DPoS like solution to address this problem.

The Nodes
The Sidechain Operator nodes are similar to the witnesses and they run Peerplays blockchain software with sidechain_plugin enabled. We can elect these 15 nodes using the stake weighted voting & the nodes are rewarded for performing the cross chain transactions. The reward is propotional to the number of transactions each node processes on a daily (24 hour time period.)

This makes it extremly important for these SONs to be available all the time, communicte with each other over a reliable channel and have fast connectivity with the Hive blockchain.

The SONs performs periodic heartbeats using the Peerplays blockchain as an event bus to commuicate. This provides a reliable communication channel to maintain the network status.

It has something to do with PeerPlays.

Oh I have vaguely heard about that. I've heard they have a TERRIBLE marketing video for Hive, but I haven't yet seen it myself.

Fingers crossed, it can only get better.

I need to learn more about this. Thanks for sharing.

I’ve been getting more comfortable with cub defi lately and I gotta say I wish I had gotten my head around it sooner.

Having said that, Tribal Dex is a great place to practice, and shouldn’t be overlooked or underestimated.

Considering how easy it is to drop DEC into a pool for double airdrop points, since it connects directly to my HE wallet, it proved to be a cozy place for me to play with no significant risk (fee-less transactions, baby!).

Once I got a feel for it there kingdoms made a lot more sense.

LEO is Hive's gateway to DeFi on other chains.

Khal's decision to go this route has proved to be the correct one and the entire Hive community owes him a lot in my opinion.

But while LEO allows Hive investors to access DeFi on other blockchains, also don't forget we do have DeFi liquidity pools on Hive in the form of Tribaldex Diesel Pools.

Yeah the LP rewards pretty much suck on everything, there are some hidden gaming gems such as the Splinterlands LPS.

Not to mention my personal fav, the SWAP.HIVE:SIM pool.