Why I Just Bought A Stack Of PolyCub 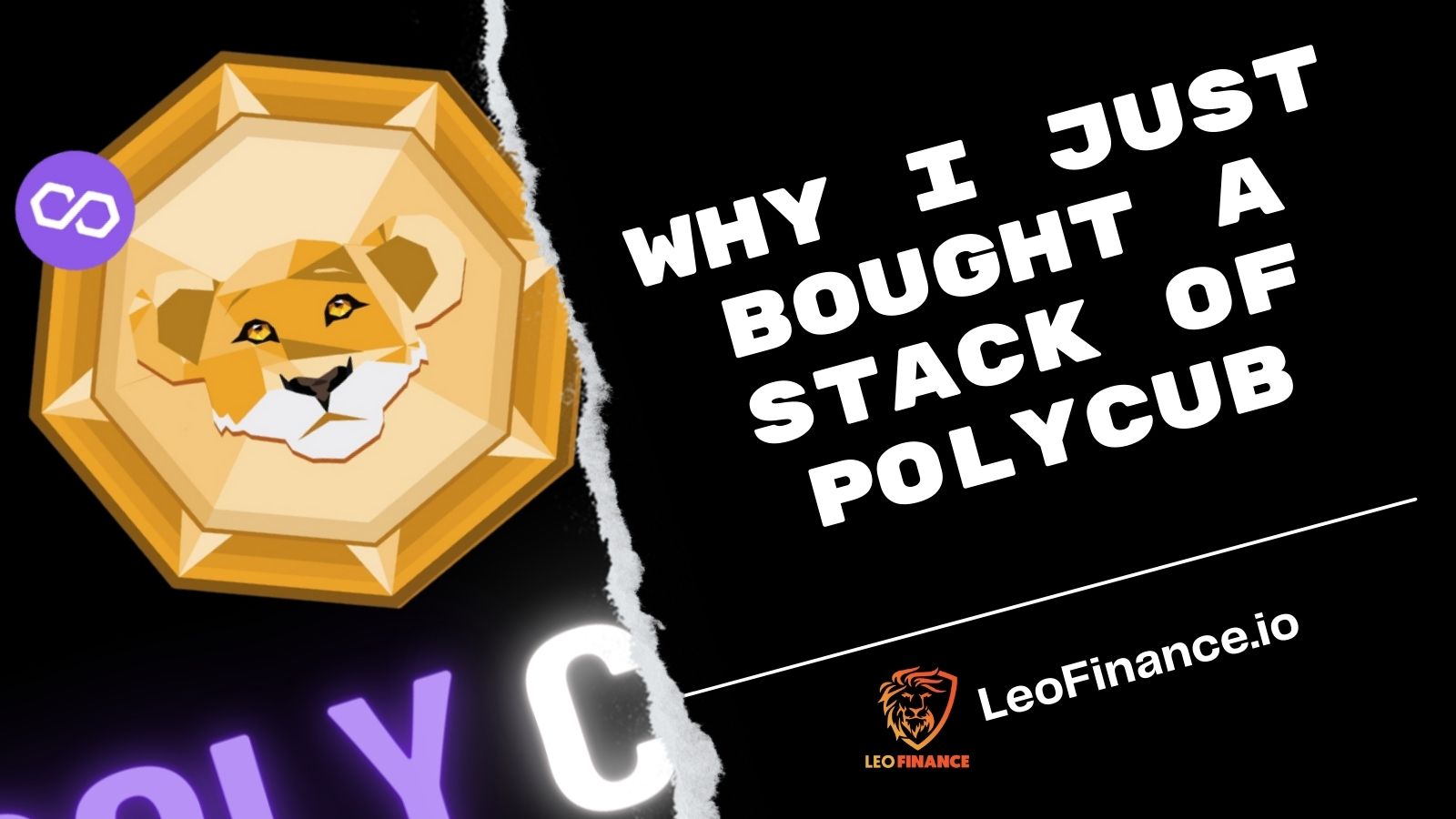 Why I Just Bought A Stack Of PolyCub

Sure there are countless DeFi platforms anymore, along with pairs as far as the eye can see. But what do they all lack that PolyCub has?

Yep, Polycub and most likely soon after CUBDeFi will have new pairs to hive. This will finally open Hive up to some real defi aspects on other blockchains and start to branch itself out.

One of the biggest issues I've had with hive personally was just how hard it was to get or really do anything with outside of posting and curation rewards. Now with more use cases Hive and tokens of hive such as LEO can be paired up across the Polygon Network.

So what has me excited that I just stocked up on what I consider a decent chunk of Polycub?

Right now Polycub is under $0.15 each and to be honest with you my feeling is it really can't drop all that much lower so a buy now for me is a long term hold that should pay off nicely in the months and years to come. For me DeFi such as CUBDeFi is a long term hold. I've only stacked CUB myself for the last year with no trading out of it. Sure I could have made more trying to time it and selling and buying back in a few times but that's a risk of many unknowns. 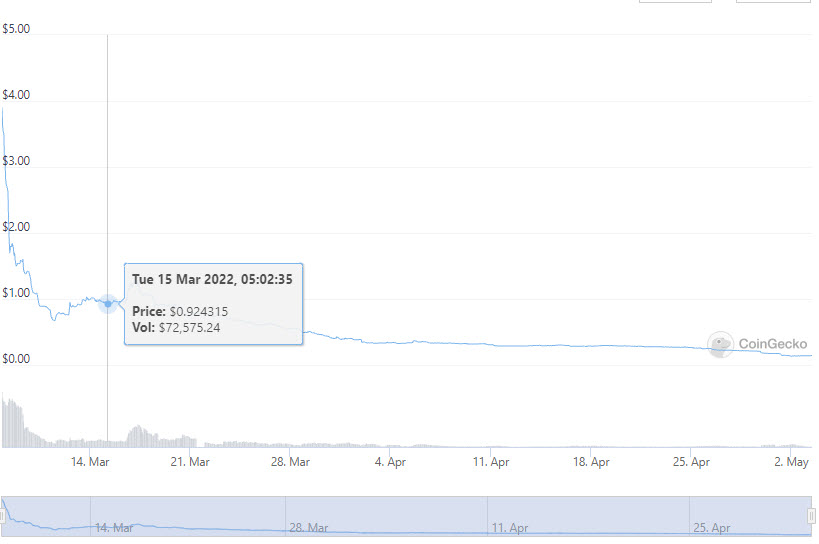 Sure this chart looks scary but let's be honest what new launch doesn't look like this. For the most part however all of April Polycub has held out decently with a very high emission rate. 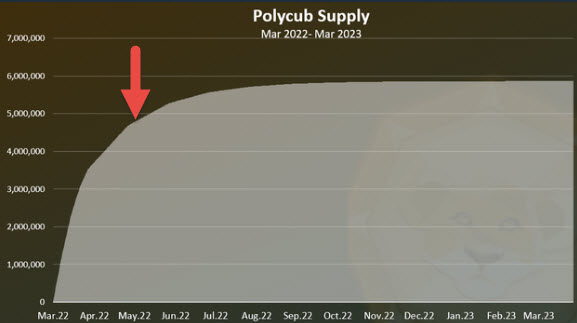 We are about to curve yet again to a 0.5 per block emission cutting that 1 per block down in half. That's a agressive move in itself in terms of new printing of the token.

Not only that but the airdrop to CUB hodlers over on CUBDeFi is also about to come to a end which is going to drastically reduce the amount of polycub going into circulation for free.

These two combined effects should be enough to start holding the price steady if not increase. Now of course there could be more selling in the short term but long term the system is going to start eating at itself with how it's designed thus increasing the value of PolyCub and xPolyCub.

But that's not all. What I'm really excited about is the introduction of Hive based tokens. It's the ONLY place I know of that offers DeFi with Hive tokens outside on to other blockchains (besides a SPS on CubDeFi). The two new ones that are being looked at being added to the platform are...

These are now two powerful use cases for these two tokens and what I really love it about it is Hive and SPS are some of my largest stacks in crypto which means I'll be able to really use the heck out of this new platform for trading.

This is also the second big reason why I picked up a stack of PolyCub today while I feel prices are rock bottom low right now. It will allow me to start being an active part in the above two vaults.

What are you thoughts about Hive/LEO being a solid factor in PolyCub?

@gangstalking -18
2 months ago
Whoever is directly controlling the V2K told me to kill myself.
They told me if I killed myself now it would save the lives of countless others.
Saying the longer I wait to kill myself the more people will suffer.
They are reckless and should have shown the proper media what they had before taking me hostage for 5 years. I know there are many in prison that dont deserve to be there because of this. Your stay in prison will not be fun @battleaxe and friends. People are going to want you dead when they find out what you did. I hope you die a slow painful death. You sick mother fuckers.

100% agree with you on the impact of the lowered emissions rate and airdrop ending. PolyCub is designed to flip deflationary in the long run and we are getting 1 step closer to that. I think the new vaults also radically reshape the value dynamics of the platform.

Your combination effect are part of the reason why I am sticking with polycub for long term and I'm not planning to sell it anytime soon. Let have this convo in next one year and see how everything would have work out

I admit that I've struggled to express to my friends exactly why polycub is such a great oppportunity, especially right now with the price where it is. I found this explanation much simpler than most i've read, or attempted to express. I will be making all the real life people I'm always trying to onboard read this.

I think he made a great decision to pick some up at this price, it looks like a screaming by soon.

Sure I could have made more trying to time it and selling and buying back in a few times but that's a risk of many unknowns.

Same here, risk of many unknowns.

It’s definitely an interesting twist. Hive will be offering more apr on Polycub than on Hive itself. Lmao I actually find this funny. Let’s see what people would go for. More money on polygon, or more influence and security on hive chain

I see many opposing opinions about the project! It's going to be very interesting because whatever happens, some will be very wrong and some very right.

I'm buying some too. I think good things are coming

I don't really know if it's the best thing to do or not but I did add some PolyCUB like a week ago. With the airdrop ending, I see PolyCUB recovering but I am still waiting to see how prices react to the emissions halving and for the new features.

I have a feeling it has to start to recover here at some point. CUB on the other hand has a lot of negative pressure on it going into the end of this week so I might grab up more of that if it falls to $0.07 or less.