I see a lot of questions around what the value of DEC is, whether it'll drop back down to its intended peg of $1 to 1000 DEC, and what the future holds for DEC, so I wanted to share an analysis, based on the information available today, of the intrinsic value of DEC.

When DEC was originally released, it came with a monetary policy that intended to keep it pegged at roughly $1 to 1000 DEC. The mechanisms to drive this peg were primarily the following:

Despite the intended peg, the price of DEC has rocketed upwards in the last few months, and that's largely due to the introduction of SPS and the SPS airdrop system. Furthermore, outside of an initially very large pump on DEC (probably speculative and expecting SPS to go straight to the moon...!), the two have largely been very correlated (roughly 0.9, which means they move together closely). 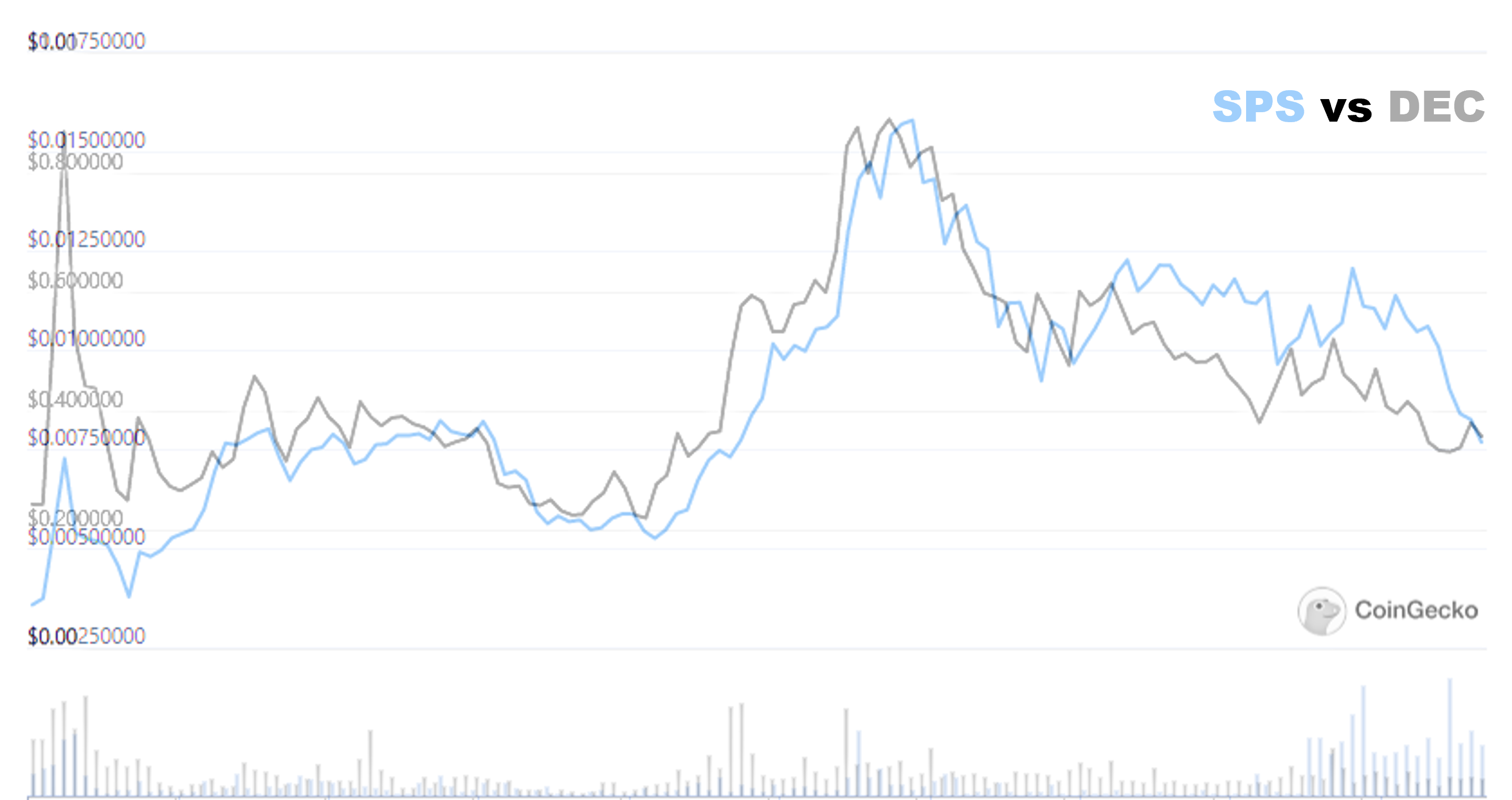 Ok so what does that mean for DEC going forwards? In a nutshell, I'll show you why I believe that the overwhelming force driving DEC price today (and for the foreseeable future) is the price of SPS, due to the airdrop points obtained with DEC.

Some important data points as well as assumptions to keep in mind first:

(1) There are 1.1M SPS distributed each day via the airdrop rewards

(3) There are currently 9.6B total airdrop points (combining all factors that contribute to the airdrop).

(4) The inflation rate of DEC continues to be 1M / day

First let's explore #3. If you're wondering why this inflationary mechanism (1M DEC added every day for player rewards) doesn't have more impact on the price, look at it this way: 1M DEC adds 1M airdrop points to a current total (at the time this article is written) of about 9.6B airdrop points. That's only about 0.01% "inflation" in airdrop points per day (we'll get to why that's important), or a 2.4% in the airdrop points balance over the coming 229 days. Even if the amount of DEC added each day were to be 2x or 3x that, it still wouldn't have a material impact in comparison with the value of the airdrops.

Now that we've determined that the price won't be dramatically affected by inflation, let's look at how the airdrops give intrinsic value to DEC, with the price of SPS and the airdrop value of 1 DEC being the primary factors.

The equation we can use to determine the intrinsic value of DEC is the following:

The price of SPS obviously can change - I'm assuming most readers here hope it'll moon of course, but the reality is we don't know what'll happen (maybe a separate article on that at a later date). The total airdrop points are slightly more predictable, but also somewhat variable (more on that below).

Given we have two variables we can do a sensitivity analysis to determine the intrinsic value of 1 DEC based on these variables (the Y axis is the total airdrop points and the X axis is the price of SPS in USD):
​

At the moment we're in the area represented by the blue box, and we can see the price of DEC roughly matches the intrinsic value from this analysis. Now this is where it gets interesting - if you assume the price of SPS will rise dramatically, then the value of DEC will rise correspondingly (in fact, linearly) given the SPS that you'll be earning.

As stated earlier, the total amount of airdrop points will increase and is slightly more predictable. Given there are 14M unopened CL packs we know that'll generate 4.2B more airdrop points (300 / pack) however we don't know the timeframe. We also know that CL packs, when opened, will reduce airdrop points (from my own analysis I estimate an average of 100-150 CP / pack). We also don't know what other things will come into the game (more titles, land-related stuff) that'll add to the airdrop point total.

My estimation is that over the remainder of the airdrop period the total airdrop points will rise to around 15B, somewhat linearly, meaning we can use 12-13B for this analysis. As for the price of SPS, I am cautiously optimistic so while I don't expect it to moon to $10, I also don't see it going below its current level and do think $0.5-1 is reasonable. So from my own assumption, I can use the table above to estimate the intrinsic value of DEC.

One mechanism explained earlier which may change a few things is how DEC gets burned when making certain purchases at the store. Today, you should never use DEC at the store given it assumes the pegged price (I repeat - don't use DEC in the store!!). However the devs have said that's something they're going to fix, and it's possible they make improvements so that DEC becomes an even more fully-fledged marketplace & store currency for the game, without these weird dynamics caused by the peg. If so, it may be used more often in scenarios that cause a burn of the supply, helping increase its price.

Another aspect that isn't covered in this analysis is whether additional utility is brought into the game with DEC. At the moment it's a reward mechanism and has utility in the marketplace, however there's certainly a possibility that in the future more utility (perhaps more economic incentives similar to the airdrop, or in-game utility) is added to DEC, which could also impact demand and therefore price.

I hope this analysis has given you some understanding of what is probably driving DEC's price, and also comfort that DEC's price won't just plummet on its own independently of SPS.

Good luck and see you in the arena!

Thank you. It's really nice to get articles with depth - whether in agreement or not.

Hello @bravetofu! This is @indayclara from @ocd (Original Content Decentralized) team. We saw that you already posted your first blog here in Hive! Congratulations and welcome!

Anyways, the best way to start your journey here in Hive is do an awesome introduction post. You can choose on whatever information you would like to share and be creative as you want to be. This will help other Hivers get to know you and be comfortable supporting your works here.

It's also best to subscribe to Communities you like and share your blogs there to have a wider range of audience. Or you can check out the Communities Incubation Program.

If you are looking for tips and information as a Hive newbie, click here: Newbie guide. If you have questions, you can hop into Discord server and we'll gladly answer your questions. Feel free to tag @lovesniper @indayclara once you have made your awesome introduction post! See you around.

The peg doesn't mean much imo because it already went so much above peg. And looking at market history, it had no problems trading vastly below the peg either. Right now about 7 million DEC added daily (due to trading 7x above peg.)

Now, how do we value DEC? SPS airdrop is one component, but with so much more SPS printed daily and limited utility, it might as well be a token that you dump to collect profits. I don't see a case for SPS rising in the near term even though there's use cases on the horizon.

I think we're in a negative feedback loop at the moment with both SPS/DEC floating and nothing really grounding their values. The lower something goes, the more reason people have to sell.

As for upcoming catalysts: CL pack release will push card prices lower (in turn DEC.)
Modern league - 2x printing rate (but I think this might halt the decline somewhat.) Thinking of it in terms of botting profits. If profits go up, botters have reason to expand operations thus causing DEC to go up in the short term anyway.

But since DEC has no problems trading way below peg historically, maybe that's not really a factor.

If we're in a positive feedback loop, it stays that way until someone really decides to take profits.

Stuff in crypto can go up and down in an alarming fashion when people FOMO or rush for the exits.