@bravetofu 62
about 1 year ago
Splinterlands

I saw a great video by Bulldog the other day where he explained that he's buying Chaos Legion packs in order to accumulate airdrop points, and reselling many of the cards. I thought it was an interesting strategy, so I wanted to do a quick analysis to see what the data says and figure out if I want to apply it as well.

The first thing to look at is the current cost of a pack versus the expected value of the pack contents. Using the awesome tools on Splintercards, we see that, at scale, the contents of a CL pack based on today's market prices is about $6. Of course this'll be the value at scale, so if you're only doing this with a few packs your results will vary significantly. In terms of cost it's fairly simple: $4 for the pack, about $2.9 for a voucher (let's see if that lasts!), and $0.45 for Legendary and Alchemy potions (never open packs without them!). So in sum we're looking at a cost of about $7.35. If you're buying packs in bulk (>100) you'll get some free packs, which reduces the average cost (note that I factored in that you still need potions for the free packs of course). Summary:

There are two added values to the CL packs. The first is the SPS airdrop points, which in a nutshell (I can explain the math in the comments if anyone's interested) is roughly $1.7 for the remainder of the airdrop if you keep a pack unopened, and about half of that if opened based on expected CP in a pack. But those airdrop points aren't the focus of this post.

One of the main draws of purchasing packs now is the chance of getting the upcoming 13 CL airdrops. We haven't yet been told what the drop rates or guaranteed rates will be, so here are 3 data points I'm using to predict what it might be...:

Now we also need to predict the value of those airdrop cards. The best sense we can get I believe is to look at the current values of the Untamed drop cards, so let's see where those are today.

First, here were those airdrop champions (O_O);... (the last two were The Gorlodon and Hero of Beyond - couldn't find an image that had them all): 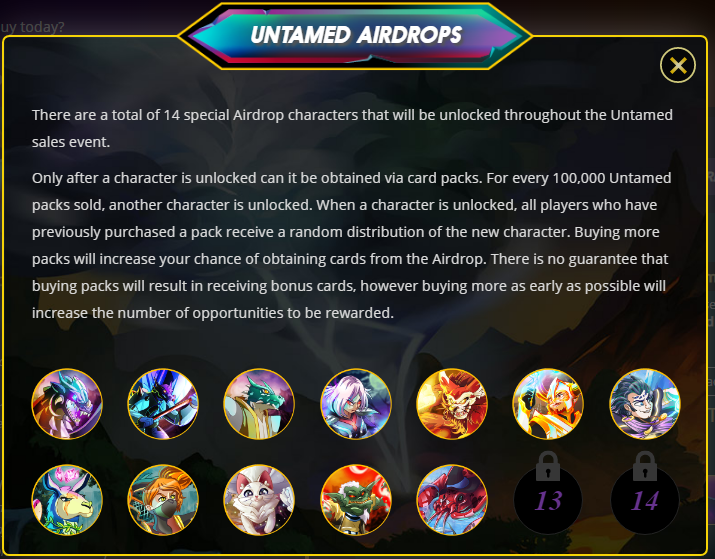 And here are their current market values and rarity. 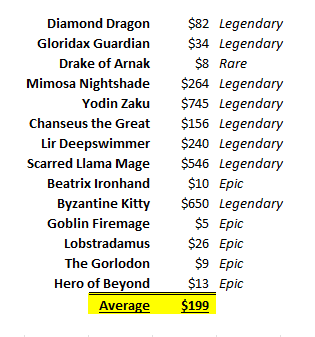 You can see the average value is a whopping $199. Can we expect the same average value from CL pack airdrops? Personally I don't think so. However will we see a 90% haircut or a 30% haircut? Impossible to say of course, so let's look at some sensitivity analysis for our two variables - airdrop drop rate & estimated card value:

Personally I believe we'll see drop rates of around 0.5% and average card values of $75-100, which would put the airdrop point value of current CL packs at around $4.88-5.85. To summarize:

...And I'm off to buy more packs. See you in Praetoria!

wow, you nailed it!!!
A thoughtful analysis and that includes each and every detail.
Looking forward to presale 2 with an aim of 500 packs!!!
Good day buddy :)

The current HiveBuzz proposal will expire in a few days.