I made my plans for the Chaos Legion general sale in Splinterlands last time around (See Post). From here on out, I will start selectively buying cards on the market. These are the ones I'm looking at...

With the upcoming split between the new Modern & Wild format, I kind of need to restructure my collection so I can be somewhat competitive in both of them. Back when the Untamed Set was released, I never really needed to buy packs since all my old summoners still could be used so I just went to buy a handful of specific cards on the market.

Later in the cycle when there was an announcement of the split between leagues, I started accumulating a bunch of single cards with an eye to level them up later on in the meantime delegating them to my affiliates. This got me to owning a lot of single Dice Summoners (12 Camila Sungazers / 37 Lorna Shires / 40 Owster Rotwells / 27 Qud Yuff) all bough very cheap. The problem I have now is that I don't want to destroy the value of single cards by combining 40 of them to level 5.

I did buy 352 packs so far using most of the potions I managed to save. This got me the following number of Summoners

I also got a golden Thaddius Brood which makes it so that on average 1 in 5 packs contained a summoner. I'm still 134 summoners short to get all of the summoners to level 5 which would right now cost around 635$ when just buying all of them on the market. At the current prices, I'm not yet looking to buy since the gap between buying packs and buying cards just isn't big enough. I will first of all look to get 23 single Kelya Fendul to level that one up probably cost-averaging myself in buying one every couple of days and afterward the Obsidian & Tarsa cards. I will keep an eye out for the prices on the market. 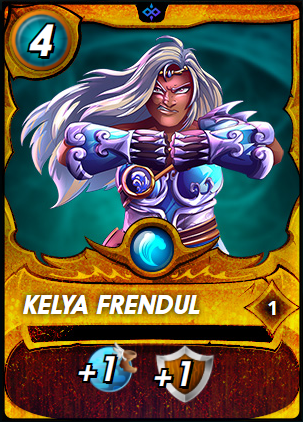 I did buy a Golden Kelya Fendu for my Alt Account for 30$ where I'm mainly using golden cards and I am competing in the golden Guild Brawl Frays. I was missing a Water & Death summoner which on multiple occasions prevented me from even entering a deck when only those were allowed. I was lucky to get a Thaddius Brood from my packs and now have summoners from all classes available in that account. The Kelya Fendu is also one of my favorite summoners which I see as quite strong since speed generally is undervalued and armor also is super useful in many matches...

The 352 packs gave me a total of 39 Legendary cards including 1 golden Legendary. The ones I'm looking to at least get 1 copy of are the 0 mana Fiend cards. I was missing the Fire and Water Fiend cards and I did buy both of those on the market over at monstermarket.io 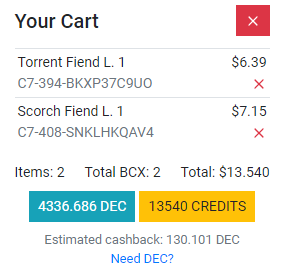 I did buy a Torrent Fiend for 6.39$ and a Scorch Fiend for 7.15$ as single cards which is more than enough to give me an edge in many matches to come. These are cards that pretty much everyone is going to want 1 copy of while the bigger players will need them at level 4 where it becomes way more powerful giving an extra ability. If I were in a position to buy cards just as an investment to rent, these at the current prices would be ones I would for sure have a closer look at.

I did put the duplicate cards on the rental market at a price of 1.28 DEC a day which should rent them out most of the time giving a +22% yearly return based on the current prices. They pretty much got rented within minutes after putting them on the market. I stopped being greedy on the rental prices since I just don't have the time to readjust them all the time which now leaves many unrented as prices fell so much.

I'm positioning myself toward the split between Modern & Wild format in Splinterlands trying to find good value / usecase for the cards. After getting 352 Packs using up most of my Potions I had stacked, I now also completed the 0 Mana Fiend cards which feel quite cheap and will look to cost-average my way into leveling all summoners up to level 5 again. I always aimed to have a balanced collection allowing me to play more optimal based on the game rules and available splinters most of the time. I will have a closer took at more of the Chaos Legion cards the coming weeks before pulling the trigger on which ones I will need the most.

** Please let me know in the comments what cards you most of all want to add to your collection and I'll make sure to give it an upvote!

Sounds like a good strategy to me, summoners first.

They ain't going down in price it seems!

Indeed, I saw the Kelya Fendu go for 3.57$ a couple days back but looks like they are all being bought up. It kind of makes sense since everyone needs quite a few of them. It's uite hard to predict where they will go but as long as packs are available there certainly is a limit to the prices. The legendary cards feel crazy cheap compared to the summoners.

Fiends and summoners definitely look like best investments. Having fiends as max level in champion is incredibly powerful, while summoners.. well they're the key to doing anything in the game.

The only reason against investing too much in summoners that i see is the legendary airdrop summoners, but that's likely a few months away.

I didn't even know there were going to be legendary airdrop summoners. If they are as overpowered and game-breaking as the untamed ones it's going to cause a lot of frustration to many players. It kind of feels like the regular Chaos Legion Summoners have quite a lot of power creep with 2 abilities.

It's going to be interesting to see the price evolution of the Fiend Legendary cards.

I have my lvl 2 summoners and I am working on filling in the gaps on missing cards. A few epics here and there.
!PIZZA

I have always found the uneven summoner levels to have a way bigger impact. Level 3 allows you to play Level 2 Legendary cards while the difference between Level 1 and 2 summoners always felt kind of neglectable to me. Good luck reaching your goals!