With the overall downtrend in the crypto market and the bear market, the demand for new Hive accounts is going down as well. Unlike 2021 when there was a record high number for accounts created per year, 2022 seems to be on the totally different side with a low number of accounts created.
Hive accounts have a readable username unlike the random strings on Ethereum or Bitcoin wallets. This human readable name comes at costs as it takes up resources. Creating new Hive accounts is the most expensive operation on the Hive blockchain and it can be done with a lot of Resource Credits (RCs), meaning a lot of Hive Power, or just paying the fee that the blockchain has for creating new accounts. 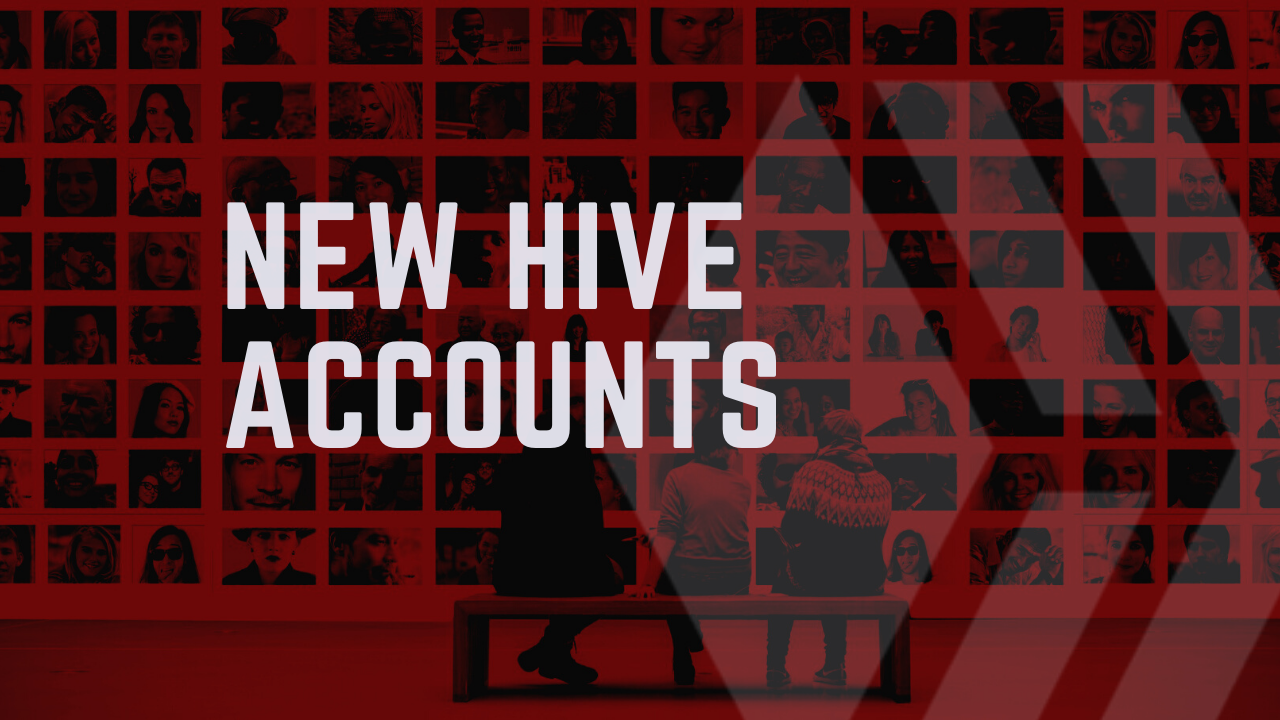 The fee for creating new Hive accounts is a parameter set by the witnesses and at the moment it costs 3 HIVE. With the volatility of the HIVE price sometimes it is a challenge to price these things.

Here we will be looking into the following:

For context we will be looking at the period from the very beginning of the chain, March 2016 till today.

Here is the chart for the overall accounts created. 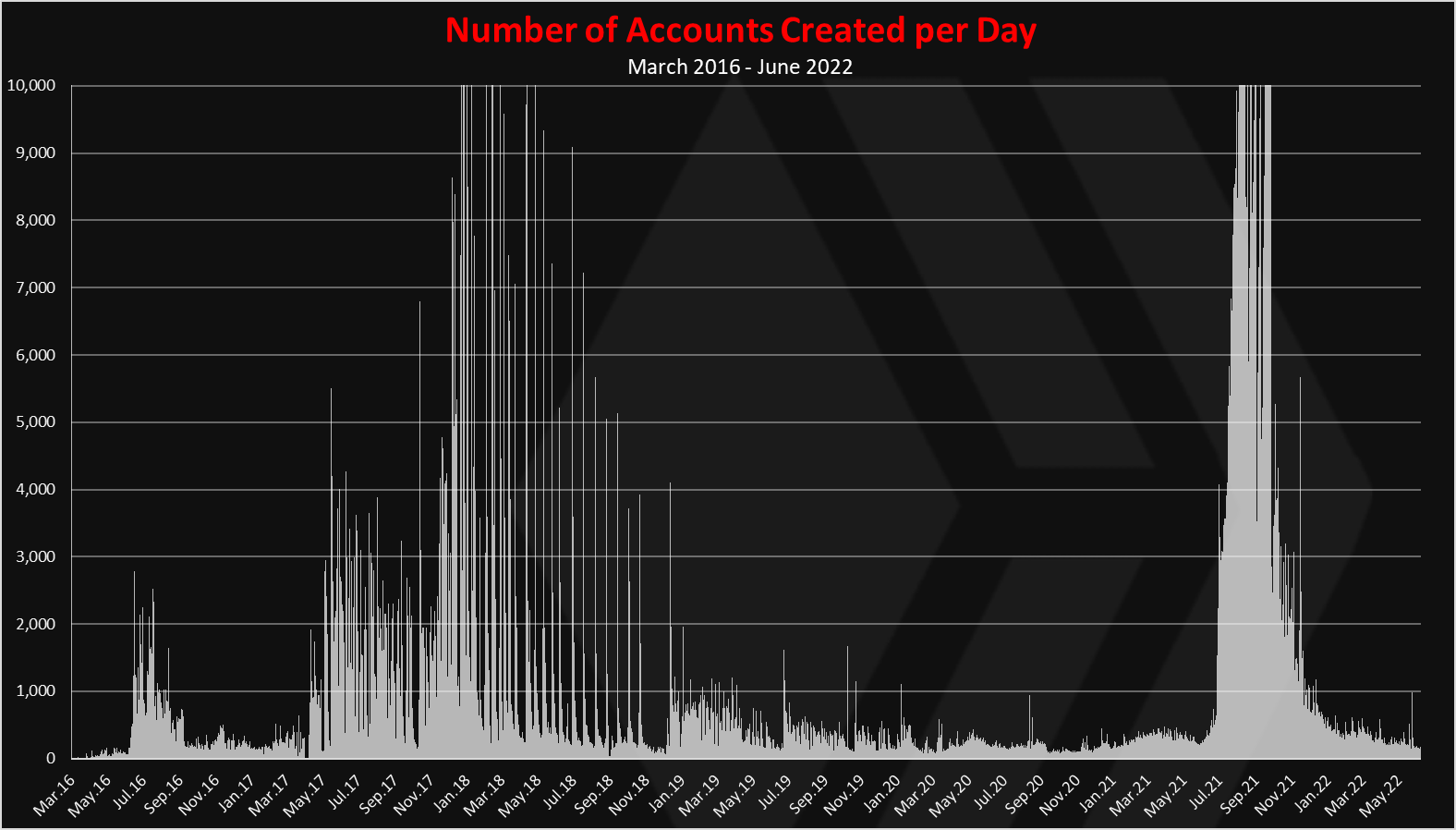 Here we can see the two spikes in the overall period of Hive existence. First in 2017, especially towards the end of 2017 and the beginning of 2018. The second spike is in September 2021 where on occasions there was 20k accounts created in a day. 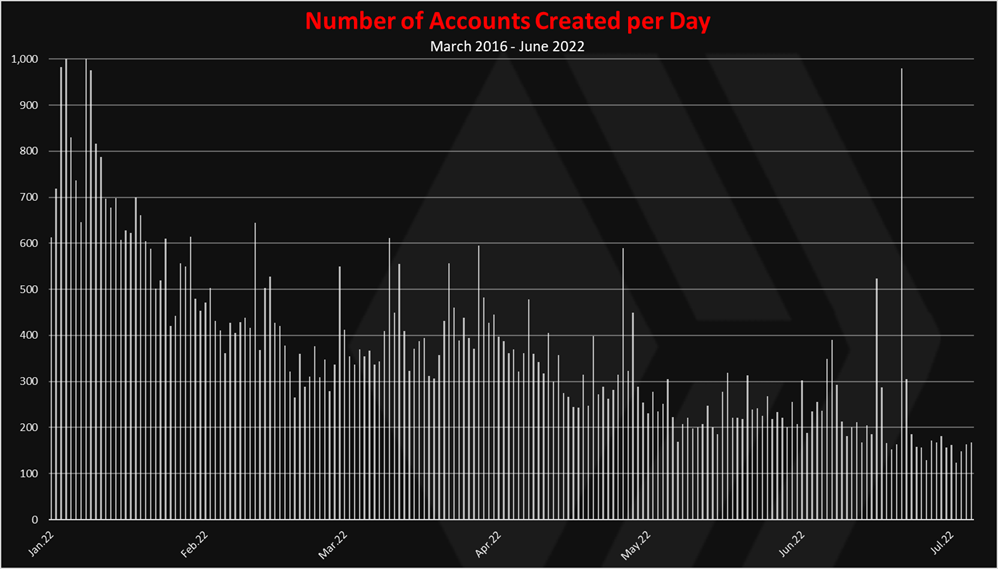 A steady downtrend from 1k to around 200 accounts created daily in the last days.

The monthly chart for new accounts looks like this: 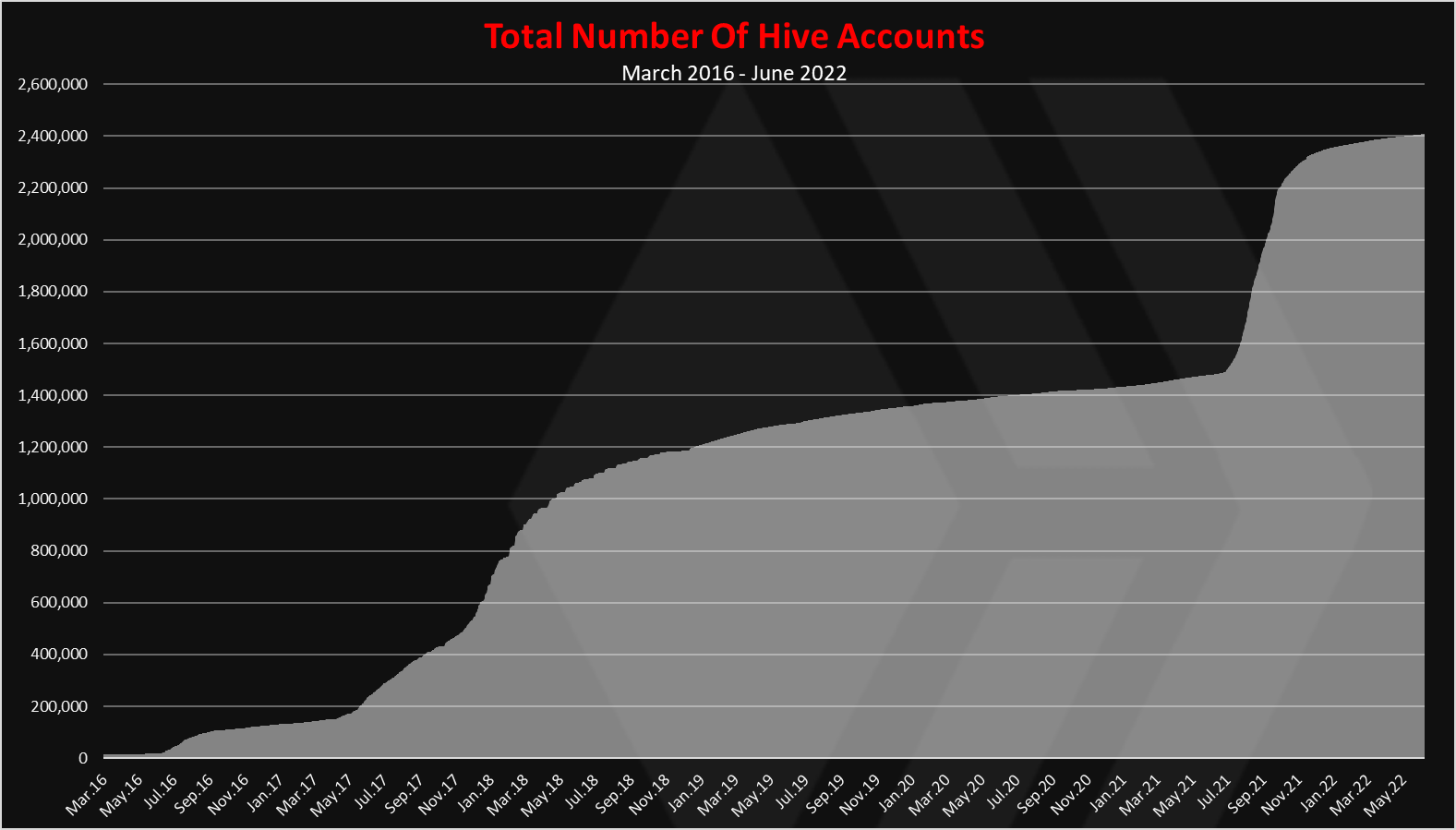 Just to note that back in the period August – October 2021, Splinterlands burned more than 2M HIVE for creating Hive accounts.

When we sum the above, we get this. 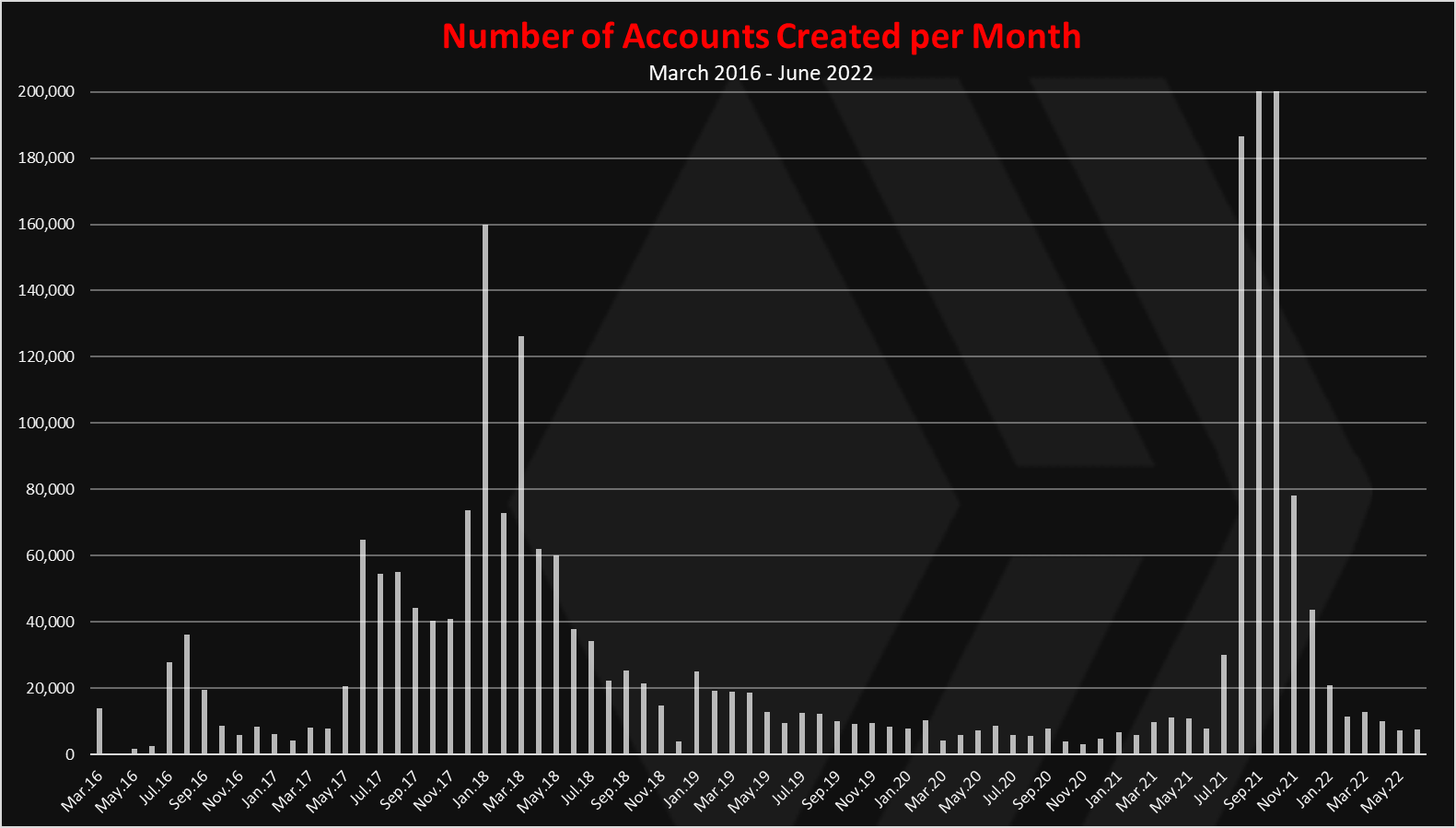 We can see here the increase in the numbers of accounts in 2017, when the accounts number reached more than 1M. Then a period with a gradual increase and then even steeper growth in 2021, and now again a slow down. At the moment there is 2.4M Hive accounts.

As we have seen from the recent post on active hive accounts, on a monthly basis there is around 500k active accounts, most of which are Splinterlands players, while the number of accounts that post is around 14k.

Ona a yearly basis the numbers looks like this.

Up until June, in 2022 there is 70k new accounts created, and the year will end probably somewhere around 150k new accounts, or similar as 2019. Although there is six more months and a lot can change in crypto in six months 😊. 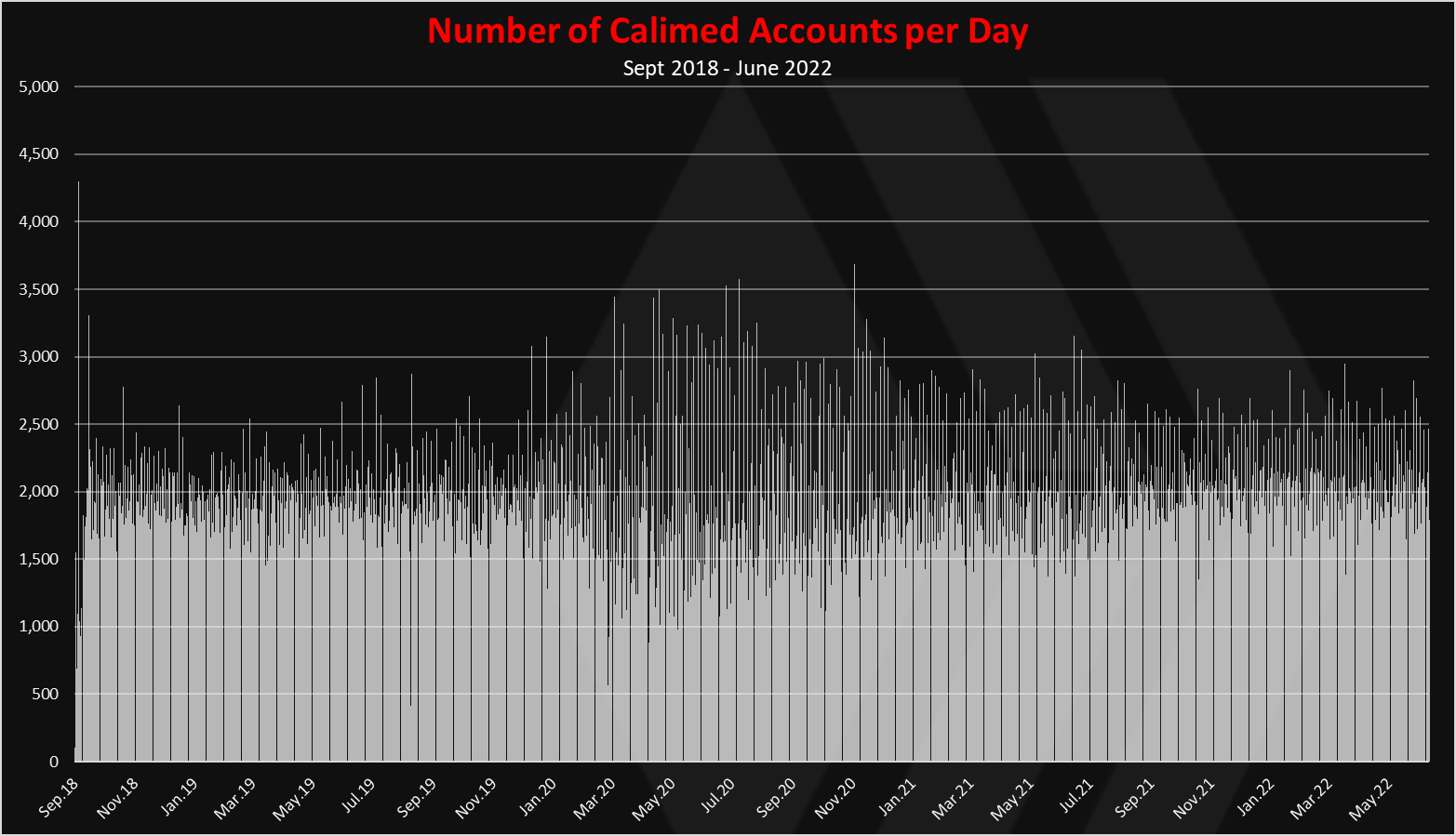 There as some oscillations in the number of claimed accounts per day, but overall, the number is around 2000 accounts claimed daily.

In the hivesql database there is data for claimed accounts starting from September 2018, so I guess this option was enabled then. Since then, a total of 2.3M accounts were claimed, and from the quick analysis it looks like somewhere around 500k accounts tokens have been used. This means that users on Hive still hold around 1.8M accounts creation tokens.

Here is the chart. 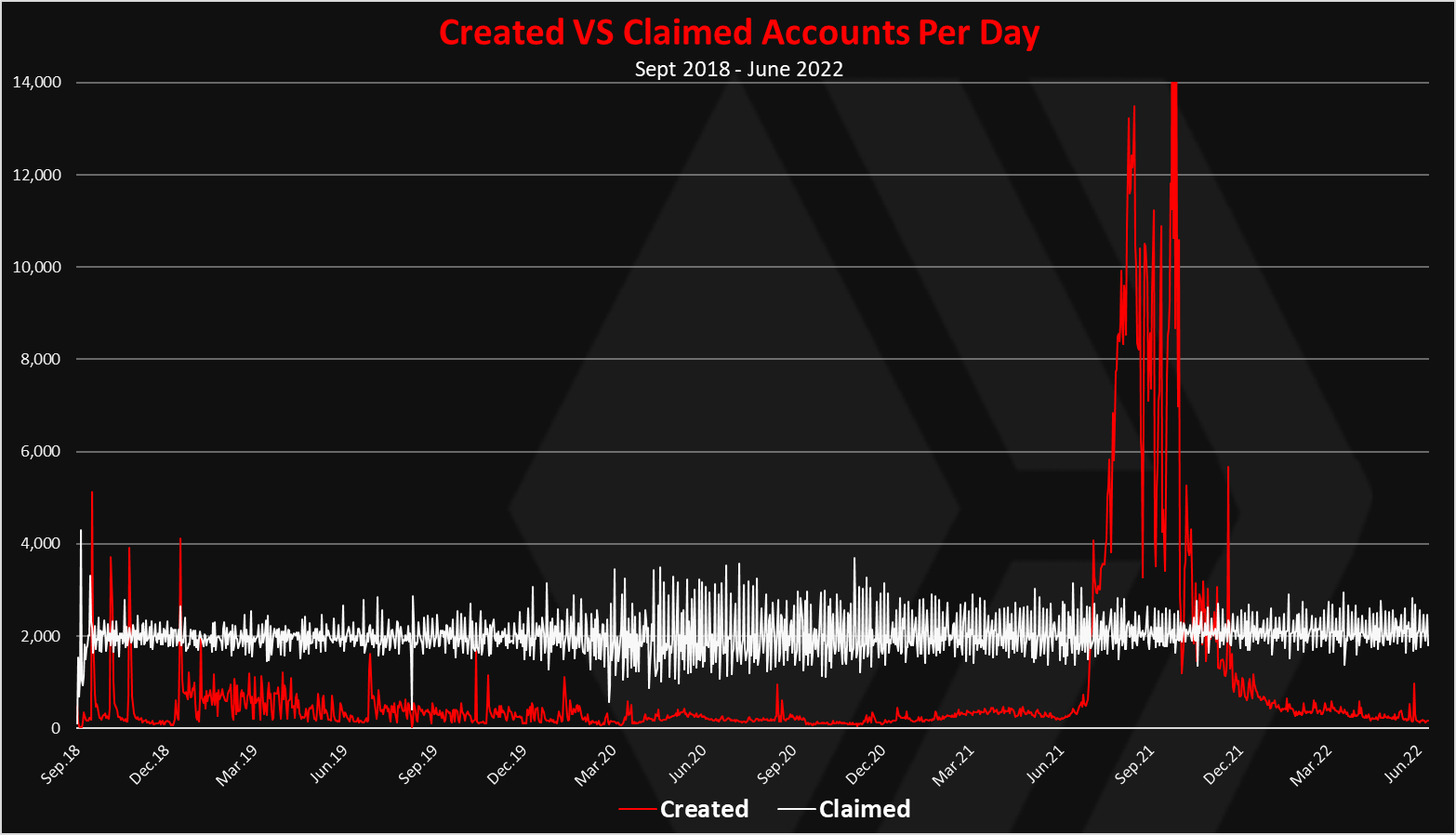 Here is who created most of the accounts in June 2022! 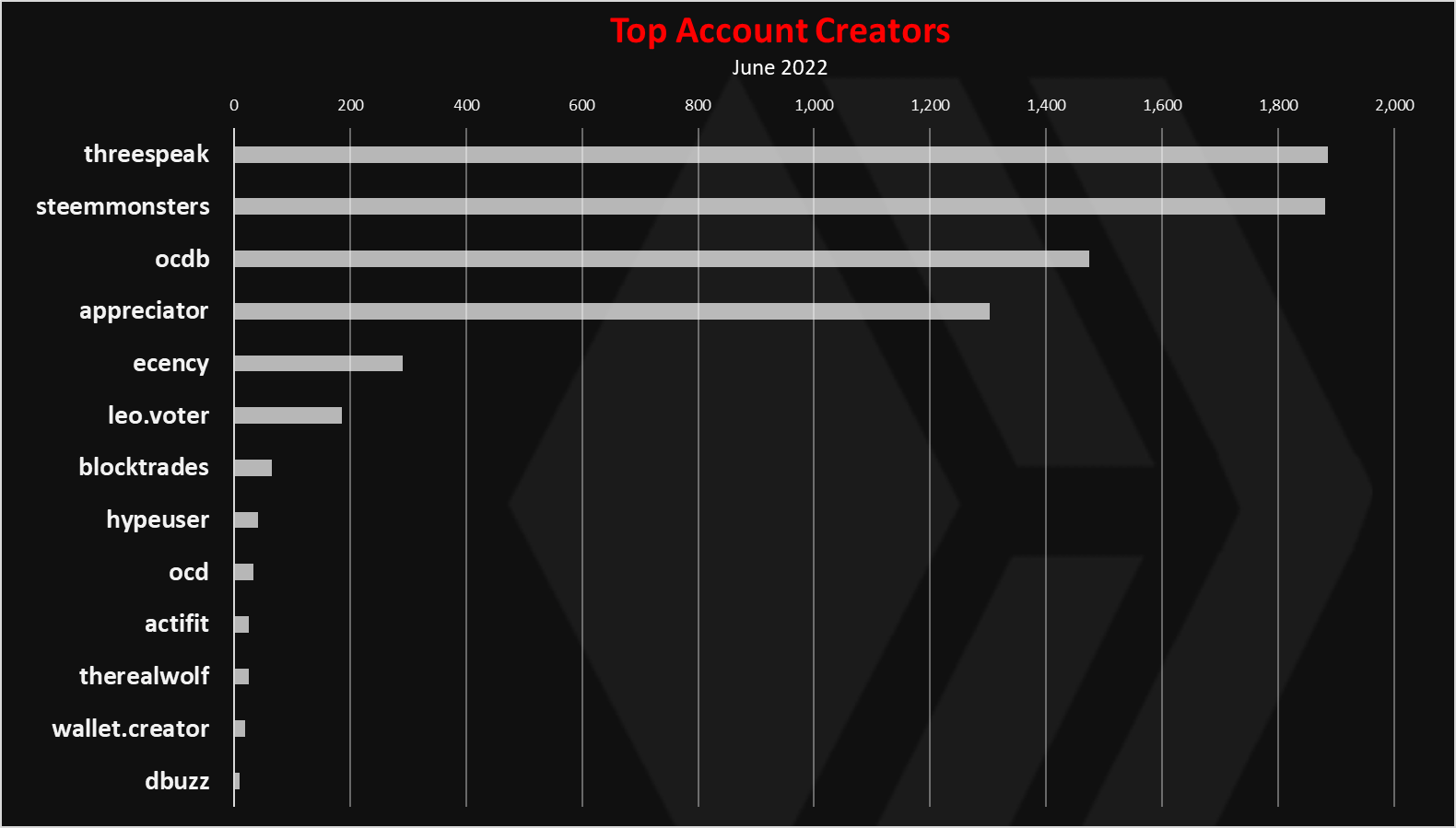 At the end the chart for who has claimed most of the accounts in June 2022. 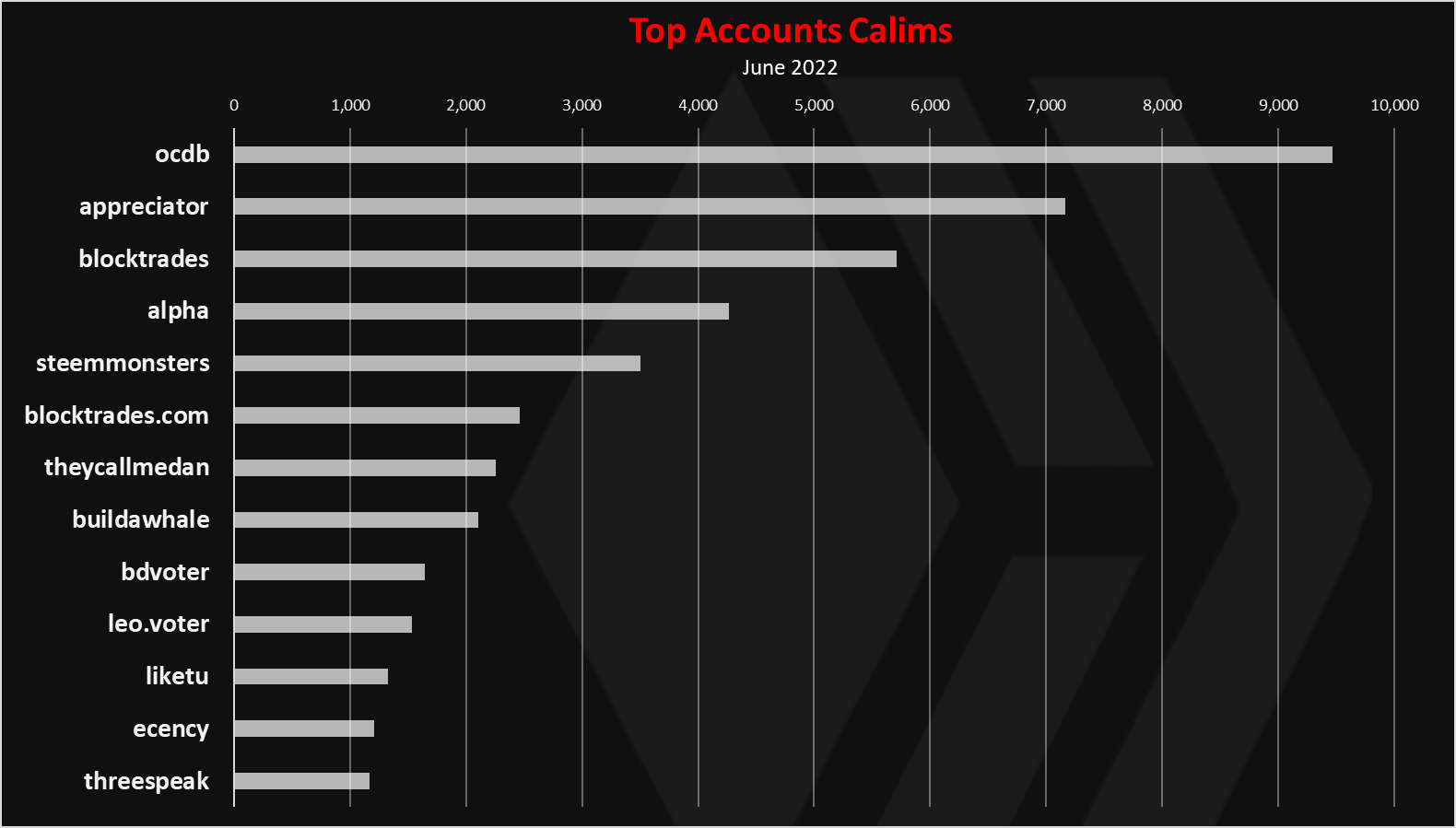 This chart mostly follows the HP holdings that the accounts have.
@ocdb has is on the top with almost 9500 accounts claimed, followed by the @appreciator account on the second spot. @blocktrades comes on the third spot.

The number of new accounts created in 2022 has dropped significantly after the massive pump in 2021. Splinterlands was the major driver for the creation of new accounts in 2021. In the last period the numbers are down there and now 3Speak comes on the top.
We will see how will things develop in the next year in the Hive ecosystem as more mature apps come out and there is a demand for accounts.

interesting info, thanks for sharing

I think that the lack of accounts created during this year is due to people's fear of the low currency market, especially since Hive has experienced a noticeable decline.

Yep, everything slows down in a bear.

There are big active accounts but I thought there were many of them posted daily but 14,000 is a good number.

Not bad, but would be better if they were millions :)

In the last period it has been heavily impacted by the Splinterlands activity. So when SL stop or increase account creation, so does the overall numbers.

Crypto fighting a bear market many lose interest to keep going, realization sets in some work needs to be done to grow in any system, too much like hard work for majority seeking fast earnings.

Time will tell and growth will return once bull markets appear once again, till then keep working, sharing and growing.

Thanks for graphs to tell the story!

Time will tell and growth will return once bull markets appear once again, till then keep working, sharing and growing.

This is the way :)
A few more killer apps, like Splinterlands will do it to.

Splinterlands definitely boosted the blockchain, now to see what is next.

Excellent overview which shows again how small we still are. 14k posting accounts on PeakD/Ecency/Leofinance plus a few 100k Splinterlands players. That’s still tiny but we are growing. That is important.
I think we might pass 10 Million total accounts during the next bull run, what do you think?

I think we might pass 10 Million total accounts during the next bull run, what do you think?

Cant really say what will be ... things can go slow, but at the same time be very explosive ... one killer app and of we go.

Think so too…if Splinterlands kicks back in again or LeoFinance or maybe another brand new thing…
More realistic would be probably that we aim for 5 million accounts.
Even more important is in my view to raise the percentage of daily active accounts. That is pretty low compared to the 2,4 million accounts we already have. Even taking into consideration that there is quite some users having two.

The crazy thing is that I have seen this happen before.

And I also slowed down and stopped then. Then when things cleared up those who were nearly Minnows when I finally became inactive are dolphins now.

Build while they Bear.

Then when things cleared up those who were nearly Minnows when I finally became inactive are dolphins now.

I remember well the time I become a minnow and dolphin. Back then it looked impossible to get at levels I'm now ... but as time progress and if there is consistency it keeps adding up.

As expected, activities drop during bear season. Hopefully things will pick up sooner.

Not too bad considering the complete blow out of the crypto markets. Interesting to see the trend though from 2017-2018 rally and the time between. It's so crazy that so many get inactive during a time you should be the most active.

Not too bad considering the complete blow out of the crypto markets.

Yes this is the conclusion from the activity as well.... there is a drop but smaller then the overall crypto dump.

This post helped in elevating my understanding of claimed accounts. But, I still don't get it. On the leofinance.io interface, instead of the dollar value of my Hive account, the claim and create account button is shown there. Should I click it and complete the procedure or just let it be?

I signed up via Ecency.

I'm one of those new hivers that landed here. 😌😊
And I can say, it's one of the good choice I made for joining this platform.
Have a nice day. 🤗

Interesting to see the numbers like that.. the graphs do a good job of showing the history compared to what's happening now.

I didn't realize account creation was the MOST resource hungry activity on hive. 🤔

whoa, that is a lot of information to digest.

The key is providing conditions for the right dApps to be built on Hive.

Read how this all have started with Toruk

@threespeak has done a marvelous job coming at first. I was not even expecting them to do this well. The Calcutta numbers are low, but this does show that @splinterlands does not have to carry the numbers. Great DAPPs are the best way to create more users for a blockchain.
!PIZZA
!LUV