Splinterlands is in a full bull mode for a few months now. New players continue to sign in and the presale for the Chaos Legion packs is happening. A lot more things to come in the next months to year.

Let’s take a look at the numbers, how is the game doing? 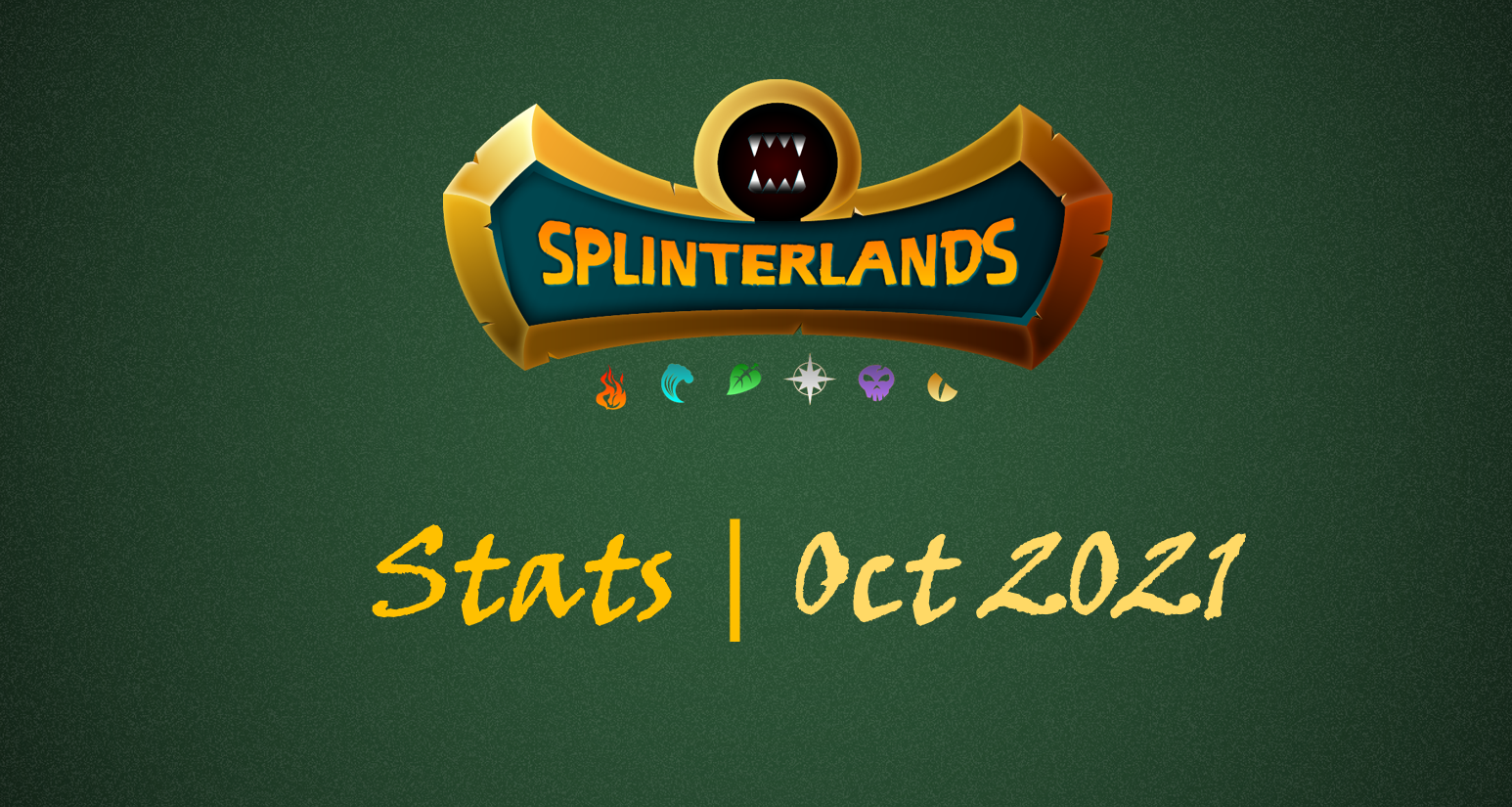 One of the main things that is driving the Splinterlands exploding growth is the SPS token, but also the overall trend in NFT gaming. Building for three years also helps 😊. The game keeps innovating and introducing new features and modules.

The following topics will be covered:

Here is the chart of the daily numbers of games played for the period. 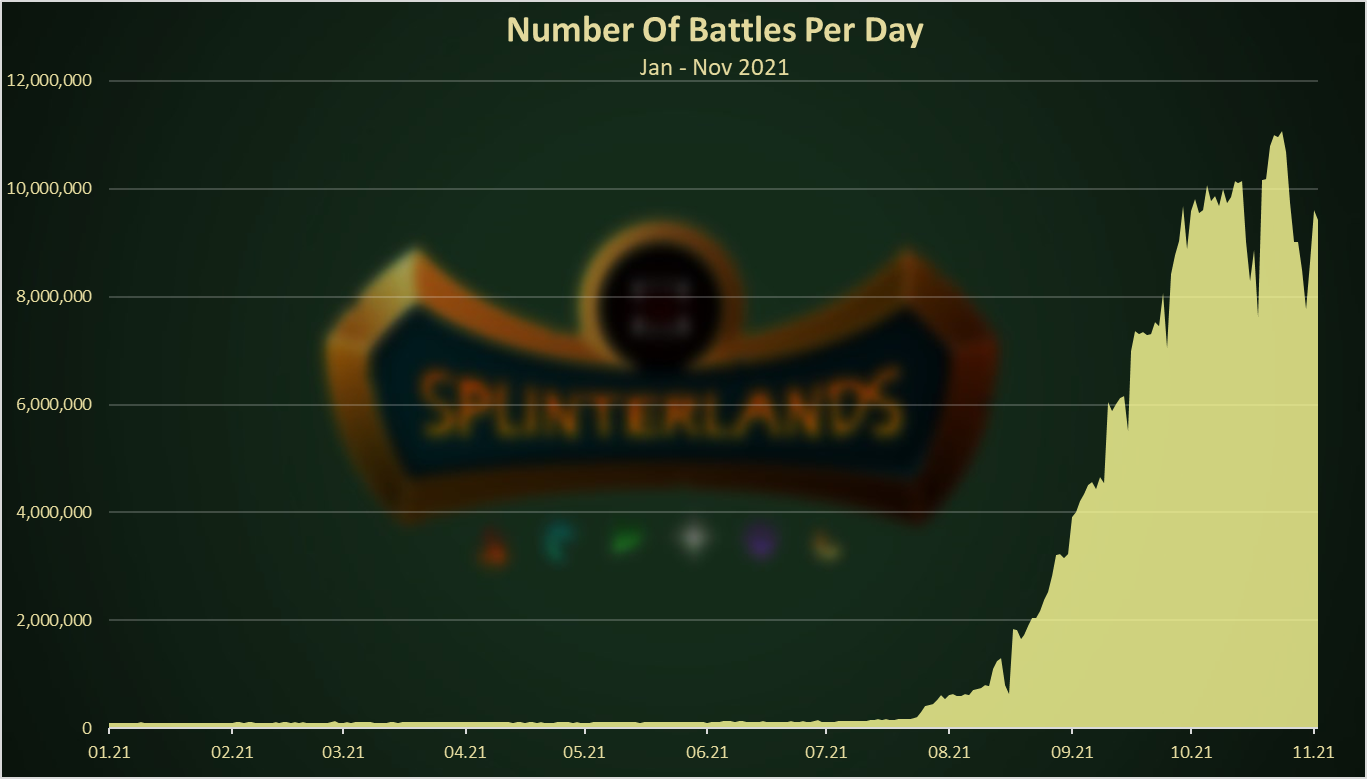 The growth has been constant for a three months in a row and just now we are starting to see some flattening out of the numbers of battles. There are bots here for sure, but the overall growth is still evident. 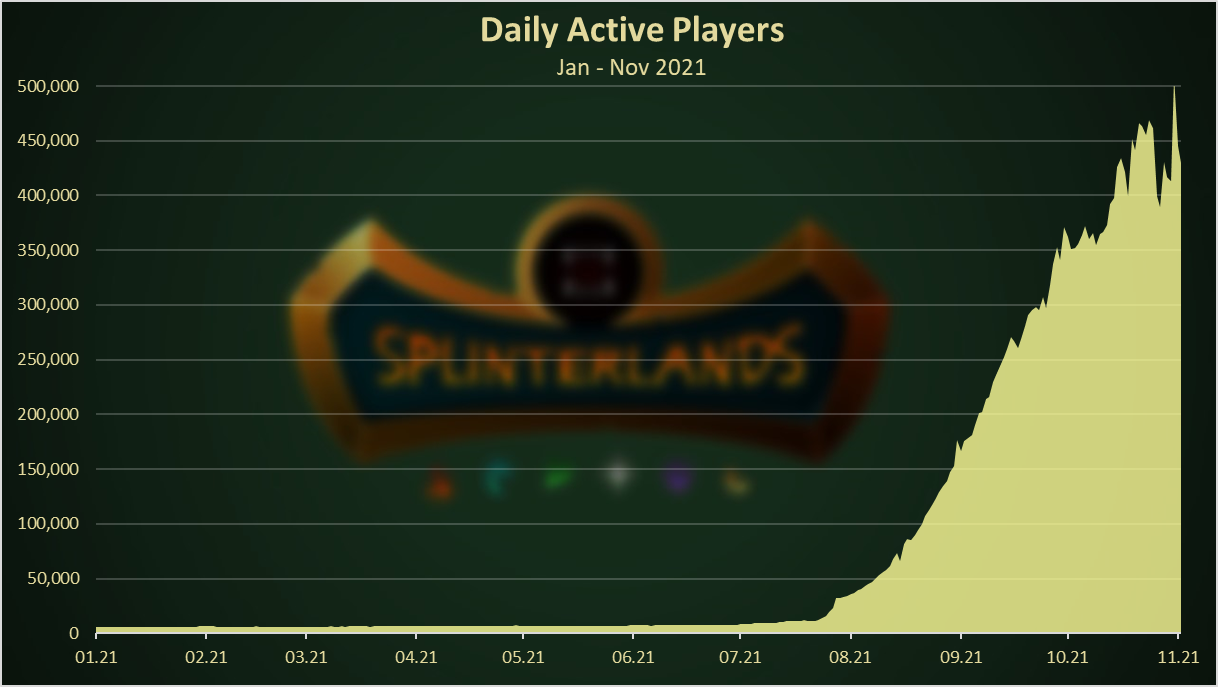 A similar chart as for the numbers of battles. Up until July 2021, Splinterlands had somewhere between 5k to 7k daily players. Then these numbers exploded and just keeps going up to a half a million daily players in the recent days.

With these numbers of players Splinterlands is entering into the big boy’s league now. One million DAUs here we come.

The note for the data from the battles applies here as well. In the last months the numbers for DAUs are from the Splinterlands API, not the blockchain.

Here are the new Hive accounts created by Splinterlands. 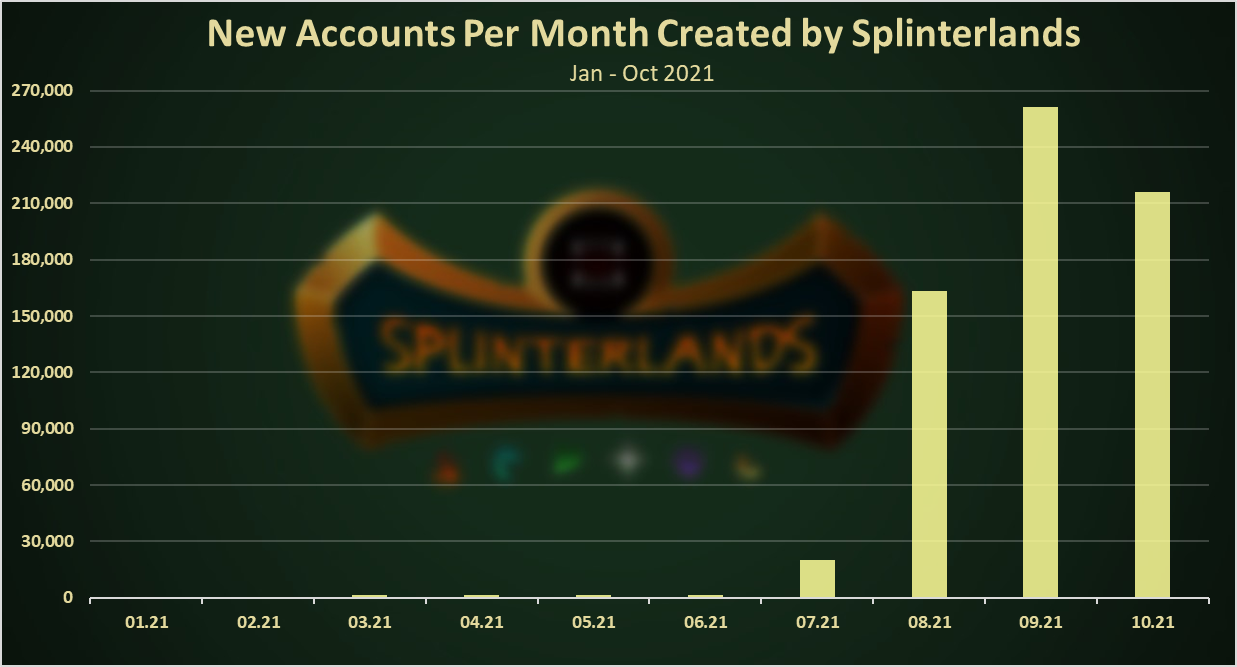 Starting from July a total of 660k accounts were created by Splinterlands. This is probably a period with the most Hive accounts created in the history of the blockchain.

Another interesting metric is DEC supply. DEC is burned when buying mini edition cards, potions, orbs, skins, guilds upgrade, etc. The DICE edition was exclusive bought with DEC that is burnt. That edition is sold out now.
On the other side the higher the price of DEC is the more is printed.

Here is the chart for the DEC burned vs created in 2021. 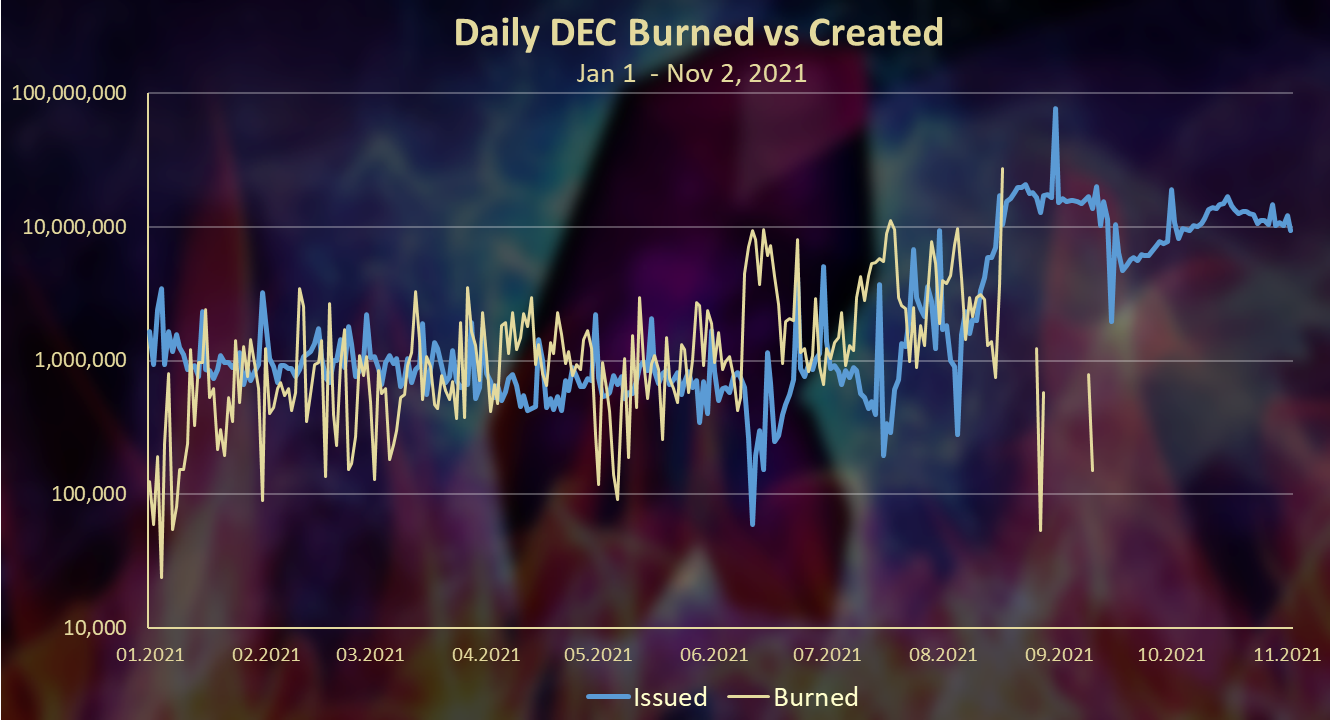 Note the chart is on a logarithmic scale.

We can notice that in July and August there was an increase in the amount of DEC burned (yellowish line) but then a drop. After August 18th, there is much less DEC burned, and for the first time in years there is days with zero DEC burned. This is most likely because the DICE edition is sold out and that was the main sink for DEC.

On the other side the price od DEC remained high, and the printing rate of DEC is at all time high.

Here how this has affected the supply of DEC in 2021. 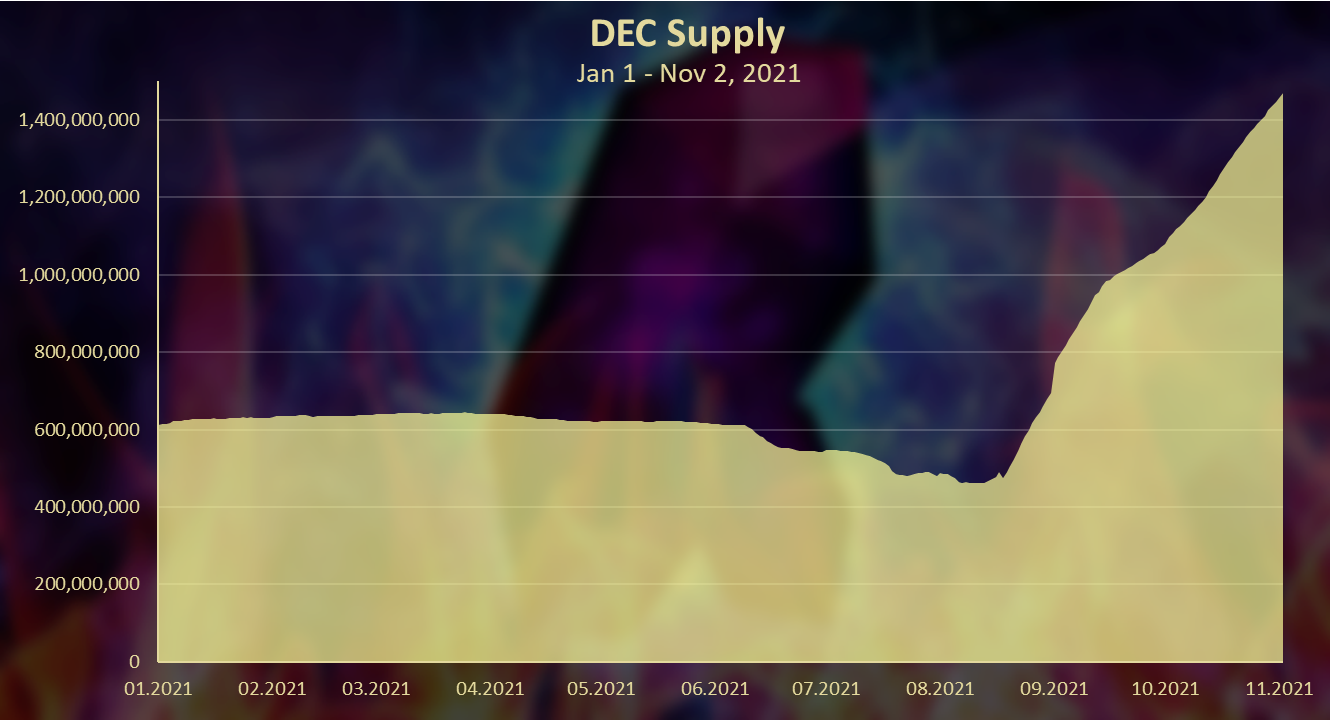 At the start of the year DEC had around 600M in supply and it remained at those levels until July. Then the supply started decreasing (aggressive DICE buying) and after DICE was sold out the DEC inflation kept growing. At the moment there is 1.4B DEC in circulation, meaning that the supply has already more than doubled in this year. However the growth has been massive as well and the DEC price is still x10 then the peg.

At the end the price for the main token SPS. 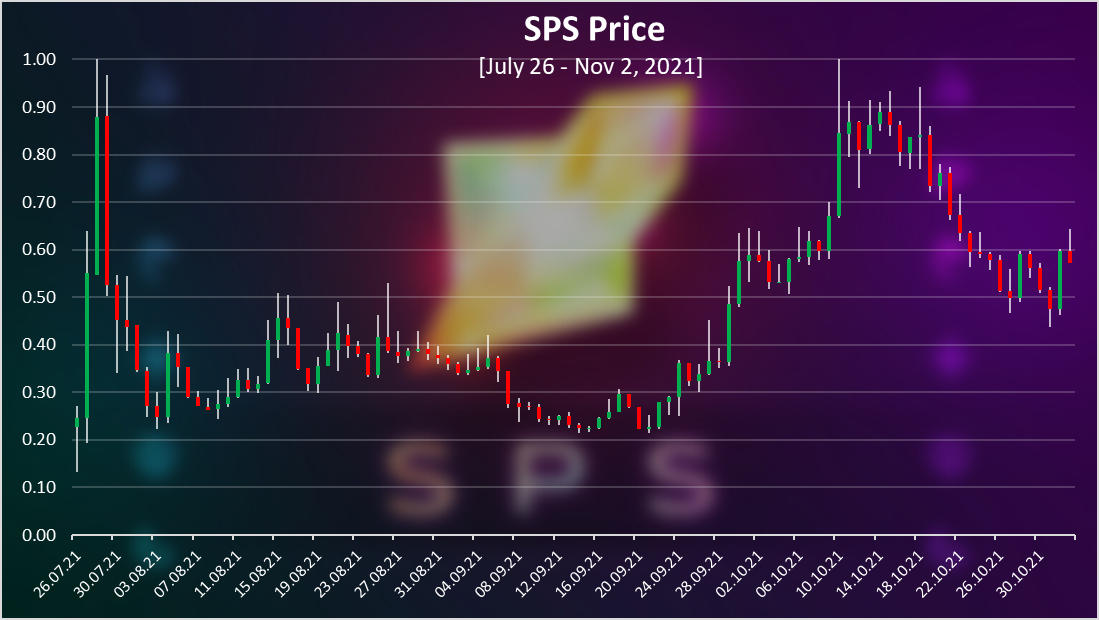 SPS has been around for more than three months now. At start the price spiked to almost 1$ and then it stabilized itself to around 0.4$ and increased to dollar again before the presale and now it is around 0.6$. Staked SPS is required for vouchers for buying into the CL presale. Others use cases for SPS to follow.

The achievement of splinter land is so remarkable

The max supply should be reached slowly in the next 5 years....

LEO/CUB/PolyCUB are giving me the same vibes of Splinterlands. I'm expecting the same kinds of results from them too. I'm not moving my CUB or LEO. All these stuff were built over years before blowing up. It's not some meme to go up & down. It's a real asset with lots of value. So I expect really really good results.
!PIZZA

What are your predictions (if any) for Splinterlands user stats, DEC price, and SPS price? I have theories, but I am fairly new to the game and I think there are many variables I have not considered.

These stats are really huge and npredictable. The growth of SPlinterlands and its impact on the entire Hive ecosystem is worth being studied as a Thesis.