SPS Numbers Are Up! | Data On Staking, Tokens Transferred Out, Supply and Top Accounts

The Splinterlands governance token has been increasing in price in the last days. This is mostly due to the upcoming new cards edition and the voucher system they have introduced. In short, if you want some of the new cards you will need SPS staked. And there seems to be some healthy competition for now.
Let's take a look at the data! 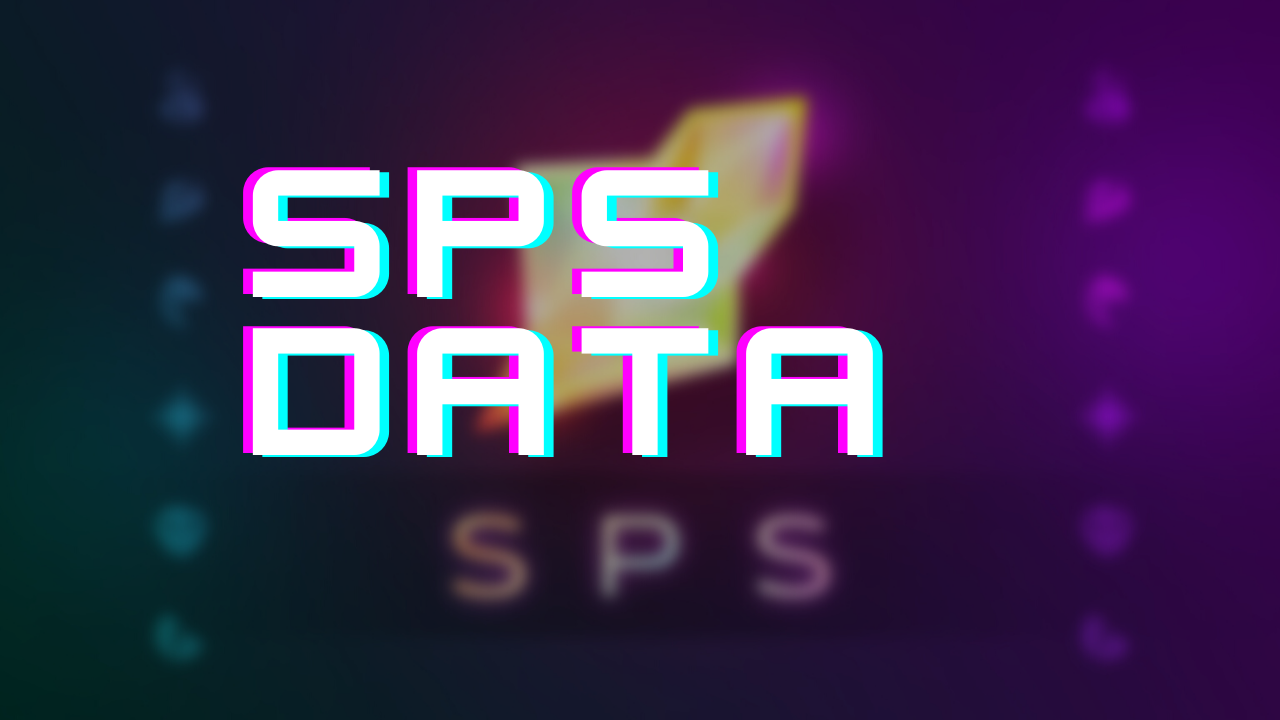 SPS Transferred Out Of The Game

Here is the chart for the both, transfer to Hive and BSC. This is sort of transfers to exchanges for the token. 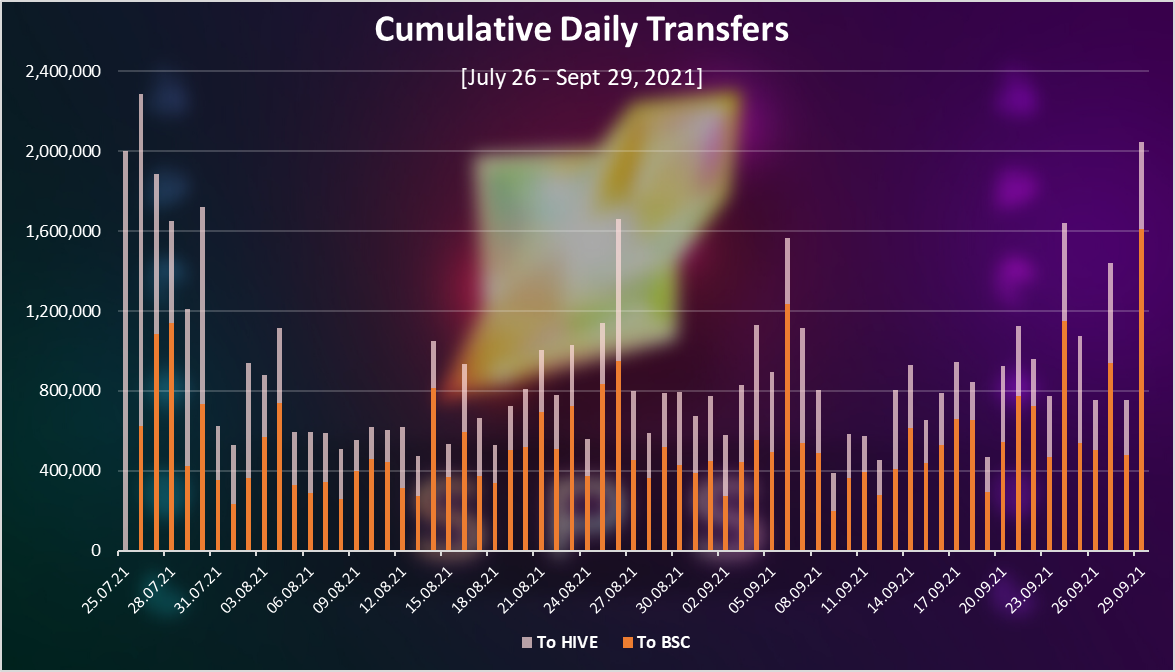 The orange bar is BSC and the pink one Hive. We can notice that the BSC transfers are dominating the chart more than Hive. This is understandable because most of the liquidity for the token is on PancakeSwap, although Hive Engine has some nice liquidity pools for SPS with over half a million in the pool.

We can see some ups and downs in the daily transfers, but on average around 700k SPS per day is moving out of the game.

Note on the transfers. As mentioned above this is sort of transfers to exchanges data, but its not net transfers. There are also transfers IN the game, from the exchanges, and the overall result in SPS transferred out is lower then the above.

I’ll try to include the transfers IN in the future posts.

Top Accounts That Transferred Out SPS

Who is transferring out the most? Here is the chart. 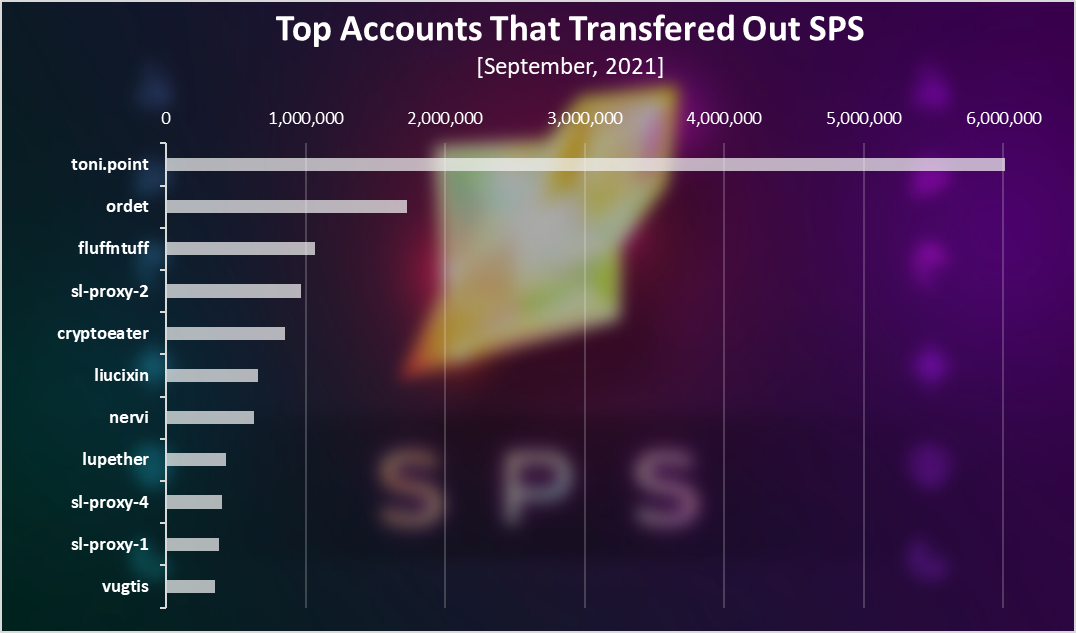 This is a chart for September only.
@toni.point is on the top here followed by @ordet. Some of the transfers above are most likely due to arbitrage between Hive Engine and Pancake, where users use the game as a bridge.

What about staking? Are players staking some SPS? Here is the chart. 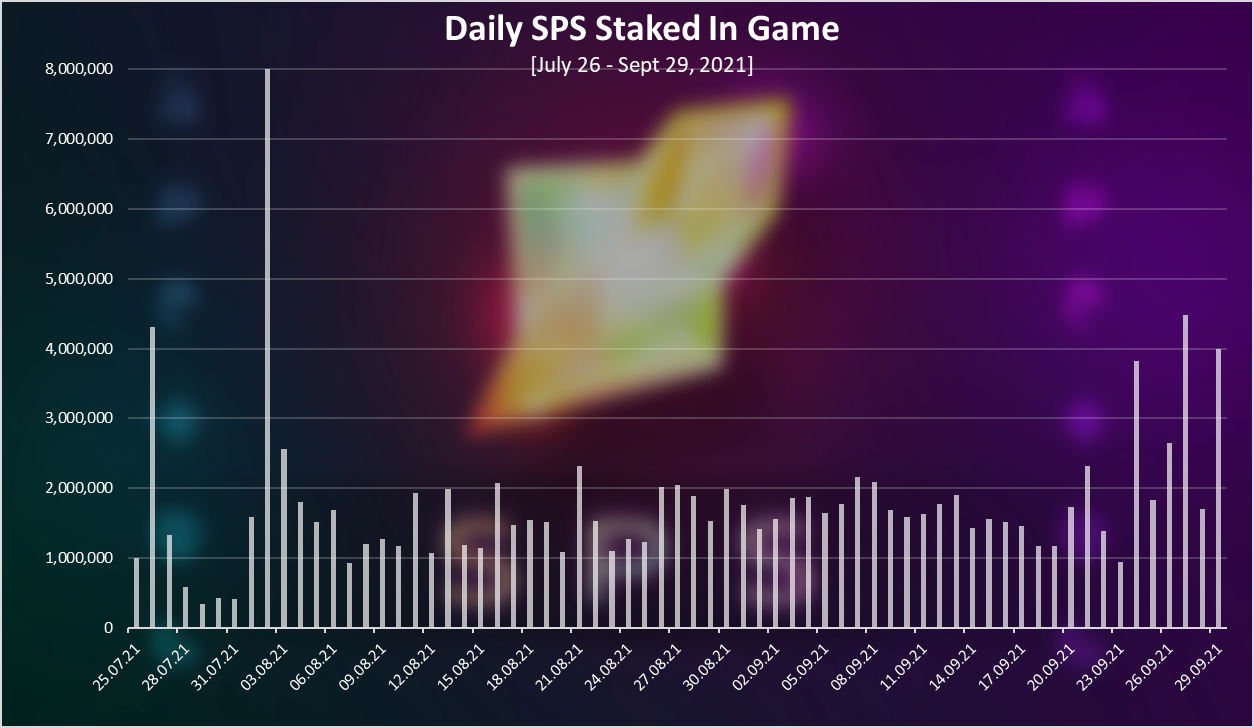 A total of 110M SPS staked at the moment. SPS staking has been constantly going up as players receive the airdrop. We can see that in the last week the staking per day has increased, reaching a 4M SPS staked per day on a few occasions.

Staked VS Transferred Out

If we compare the staked vs transferred out we get this. 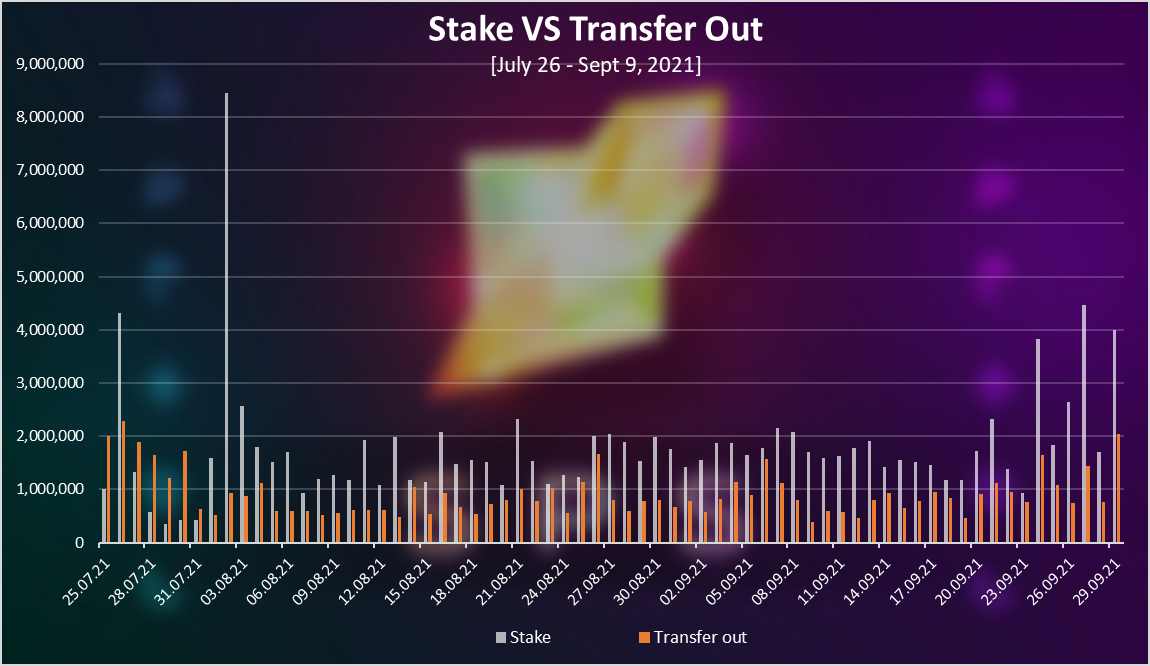 On every day there is more SPS staked then transferred out of the game. And these are rough transfers, when netted with the transfers in, the numbers will be even lower.

Here is the chart for the overall supply and the staked vs liquid tokens. 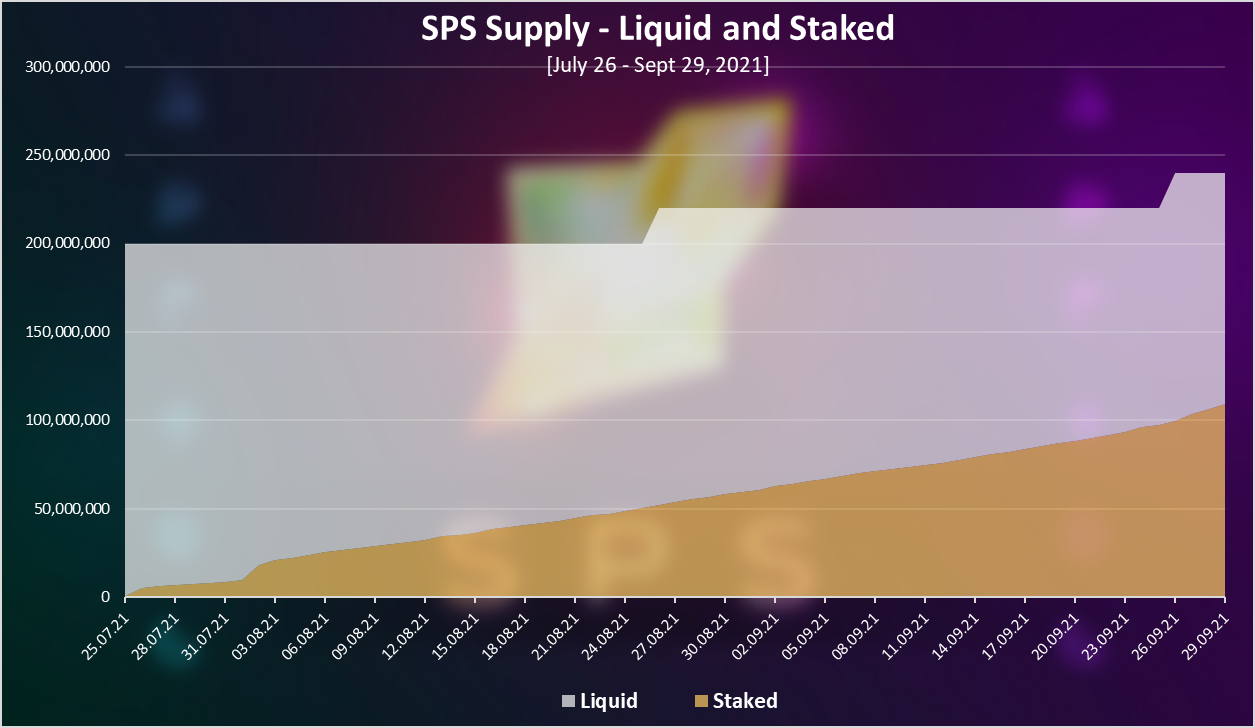 As we can notice the share of staked tokens keeps increasing overtime. I have included the unstakings in the chart as well, but they are far less than the staking.
In September alone there is 50M more SPS tokens that have been staked.
Around the end of the month the SPS supply is increasing by 20M to presale participants, but the overall share of staked SPS is still up.

Here is the pie. 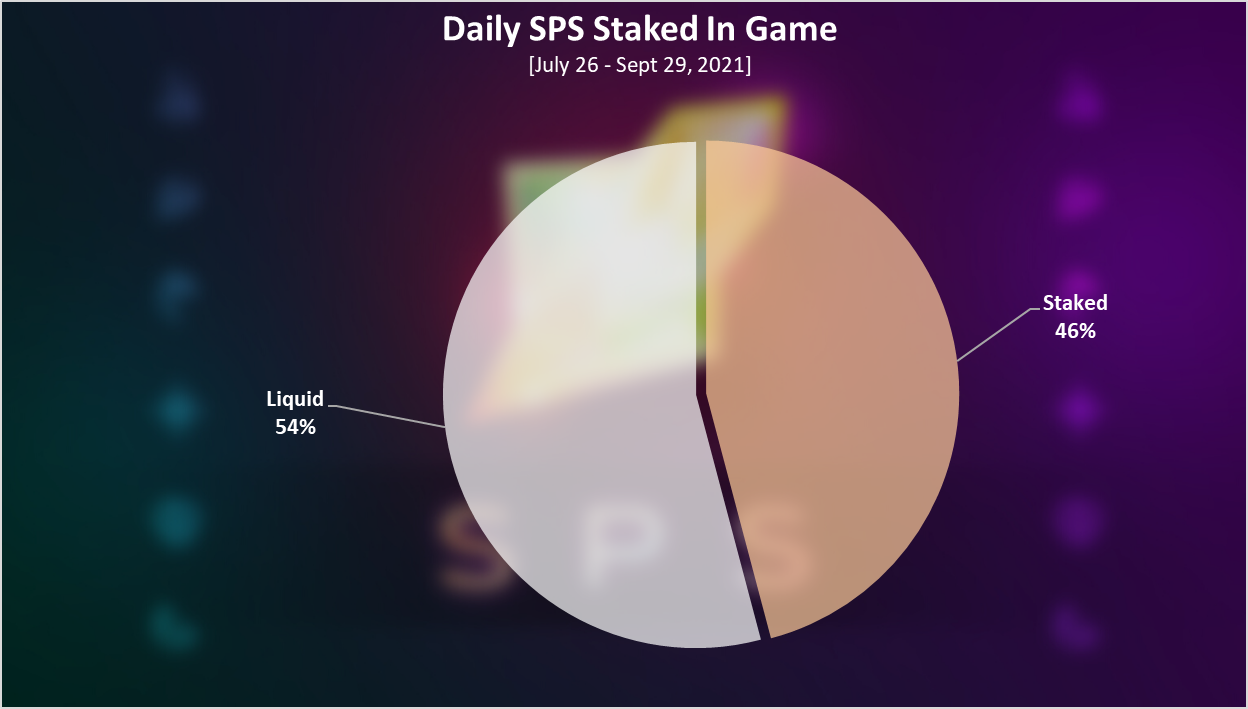 A 46% of the SPS supply is currently staked. A month ago this number was around 27%.

Who is staking the most? 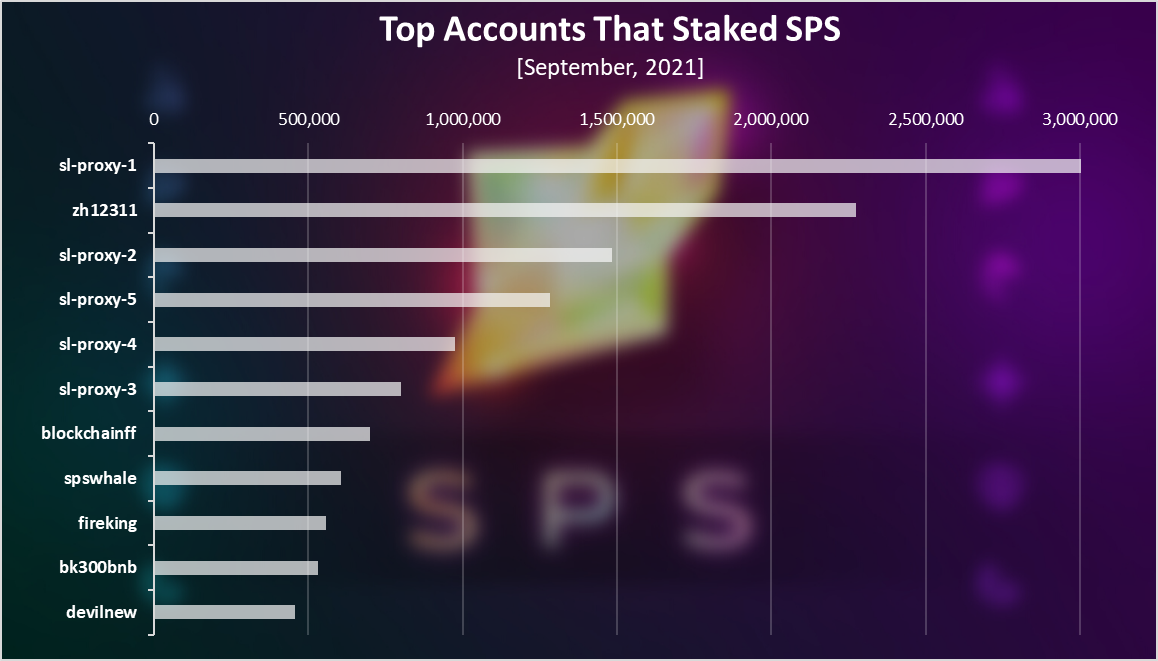 The @sl-proxy-1 is on the top for September with more than 3M tokens staked.

At the end the price chart. 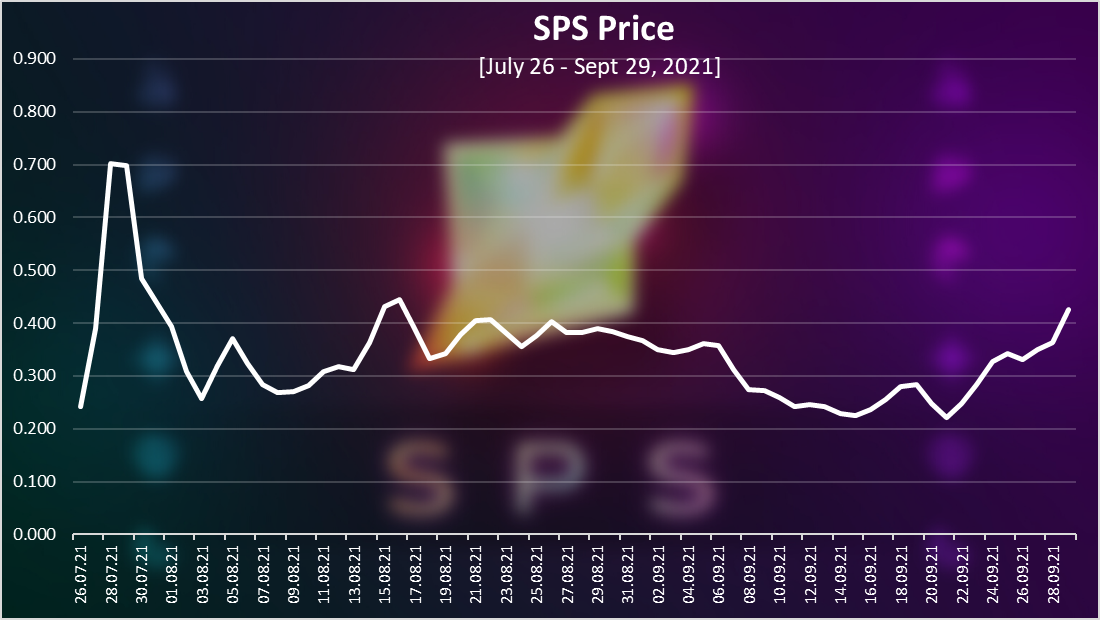 These are average daily prices.

SPS has spiked in the first few days to more than 0.7$, then down to 0.25$ and now has increased back to 0.5$ and above. Its quite amazing how the price holds having in mind the huge amount of airdropped tokens and overall inflation in these first months.

Both, the price and the share of staked SPS indicates that SL users are in for the long term with the project. The smart moves from the team compound the effect.

Great insight on the SPS movements and great to see players and investors going long for it. One factor is the CL presale that is based on staked SPS, so this is a great strategy implemented. Another thing is the fact that SPS is not released at once and floods the market but up unit 6 years from the first minted SPS. That means a long vision for the game which should simply build trust in time.

Great to see the price settling at 0.5, it's positioned to even go up. So many big account pulling waves with SPS its so good to see this influences hive.