How to Earn SPT Tokens Passively With Delegation

One of the most interesting things about the Hive ecosystem is delegation: You can delegate your tokens to earn more tokens passively.

In this post, I'm going to show you how to stake and delegate your liquid SPT to @monster-curator to start earning passively. This, in turn, will give you points for SPS drops from Splinterlands. 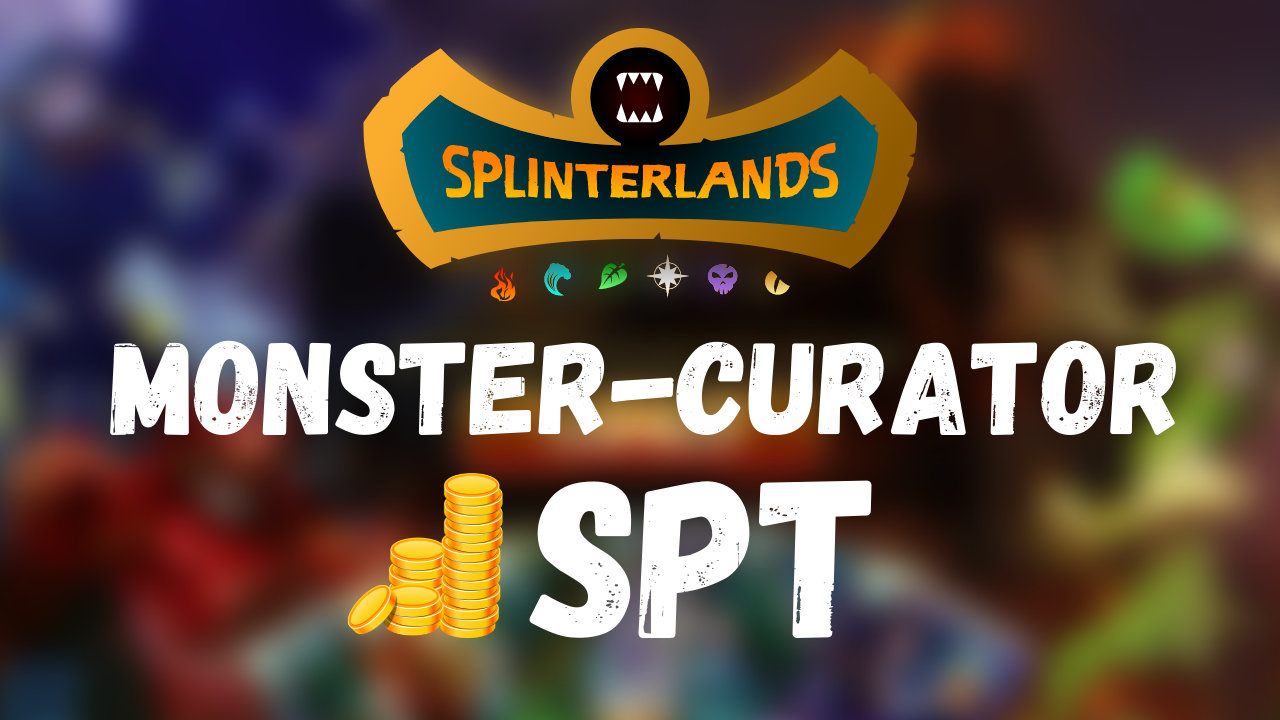 The Importance of Curators in the Hive Community

There are a lot of curators out there. By staking their tokens, such as SPT, curators have higher curation rewards when upvoting content.

The curator we're discussing today is @monster-curator, but there are many others (hopefully I'll get to write about more). The @monster-curator was created by @flauwy and @abrockman.

Why did they do that?

You can read the original post here but, in a nutshell, many people don't have time to find and upvote great content. And that's a lot of rewards left on the table for many people.

And that's where monster-curator comes in.

When you delegate your SPT to monster-curator, you get curation rewards based on the amount you delegate.

The whole work is done by monster-curator. You only need to cash in your SPT tokens on a daily basis. That's a great way to earn a token passively.

Of course, monster-curator is not a one-person team. They have built a team of people working around the clock curating excellent content.

As far as I understand, they have @marianaemilia and @r1s2g3 who are part of the team. I am sure they have more people though.

What Is the SPT Token?

SPT is a crypto token, such as Hive or DEC. As of now, the SPT token has two main functions:

Moreover, as more SPT use cases emerge in the future, the SPT token may increase in value and you will enjoy a nice appreciation. As of today, SPT is trading at around $0.01.

So, I'd say it's very important to stack as much SPS as you possibly can.

The more SPS you end up having in your account, the more Vouchers you'll get during the presale period. One card pack will cost you $4 and 1 Voucher. Thus, you want to accumulate those SPS!

Buy or Earn Some SPT First

So, how do you get SPT in the first place to then delegate to monster-curator?

If you want to delegate to monster-curator, you can do the following:

By blogging on Splintertalk.io, you get rewarded in SPT after 7 days by the time you publish your post.

How to Delegate Your SPT

Now it's time to see how you actually delegate your SPT? The process is quite simple, but you need to pay attention to a couple of things.

Follow these two step in this exact order (screenshots below):

Warning: During my research, I realized that some people get confused and delegate liquid assets. That's a mistake. You want to 1) stake your SPT, and then 2) delegate. That is the right order.

Let's got through an example together: 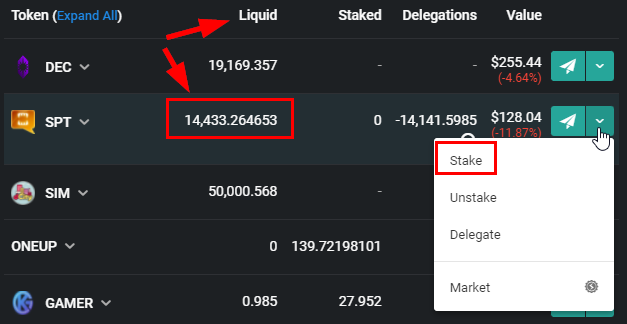 Decide the Quantity, then click on the blue button Continue. 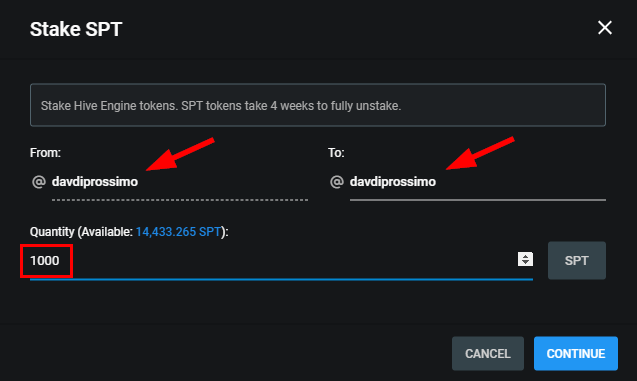 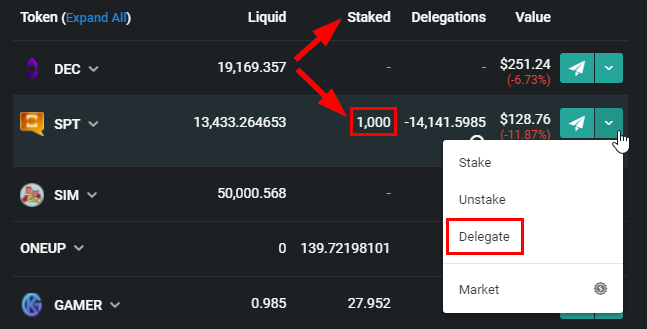 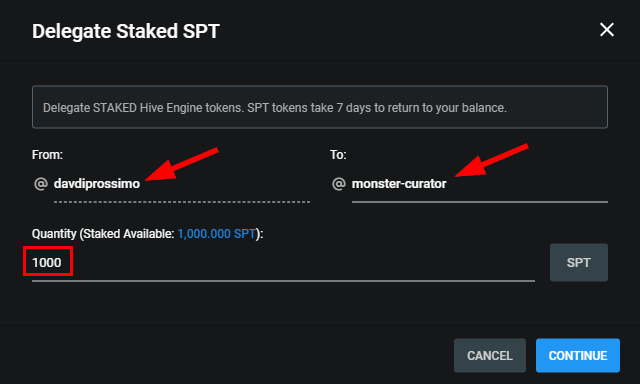 Again, decide the Quantity, then click on the blue button Continue.

Undelegating SPT tokens is almost as easy. I say almost because, as you can see from the screenshot below (from LeoDex this time), you don't have the name of the account you delegated to.

Then, you'll see this: 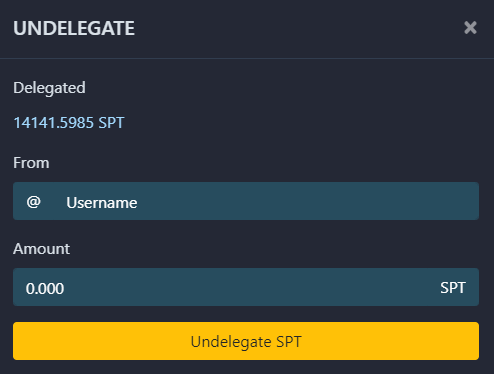 You cannot see how you delegated to! Why? Because you could have delegated to a number of different accounts.

In our example I delegated to monster-curator, but I could have done that with another account, or more than one. 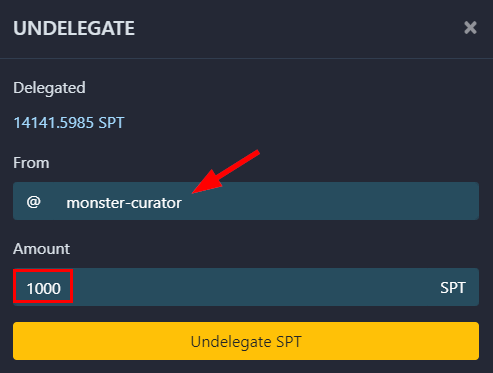 There you have it.

This is how you can delegate and undelegate your SPT tokens.

Feel free to leave a comment below with any questions or comments if I missed something important.

Congratulations @davdiprossimo! You have completed the following achievement on the Hive blockchain and have been rewarded with new badge(s) :

Very detailed guide. Beginners to SPT will sure love this. Here is a 1UP upvote.

Thank you! Yes, I did this with the beginner in mind, as I am one 👶
Happy to see this is useful 👊

Me too brother, me too. Let's grow together in #oneup, @flauwy has given us a good stepping stone here as an early adopter. 😀

I'm not exactly new anymore, but I didn't stake my SPT until I read your post. Never thought of it. I transfered from my main account to this Splinterlands-Account for the SPS airdrop points, but staking was not on my mind.
Delegated 2k spt to monster-curator and will stake as much as I can now. Thank your for the reminder and the detailed guide for everyone, not only for beginners.

Oh right. That's great you did that. It's important you get the most out all your assets.
Happy to see this post helped you.

Awesome post there, I just made my first post on the peakd site didnt find the link for splintertalk until now. But I guess I will be using this place for blogging more. Thanks mate.

Thanks for the easy explanation!
I will reblog for future consultations.

Great post! As a beginner i find it really helpfull.

That's great to hear!
Happy to see this was useful 🙂

does delegating the #SPT after staking reduce your upvote power amount? Or is that kinda the purpose, am i essentially giving my vote power away so monster crusher votes in my steed?

Thanks for grate advice with delegation. Grate tutorial!

You're most welcome. Happy to see this is useful. 👊🙂 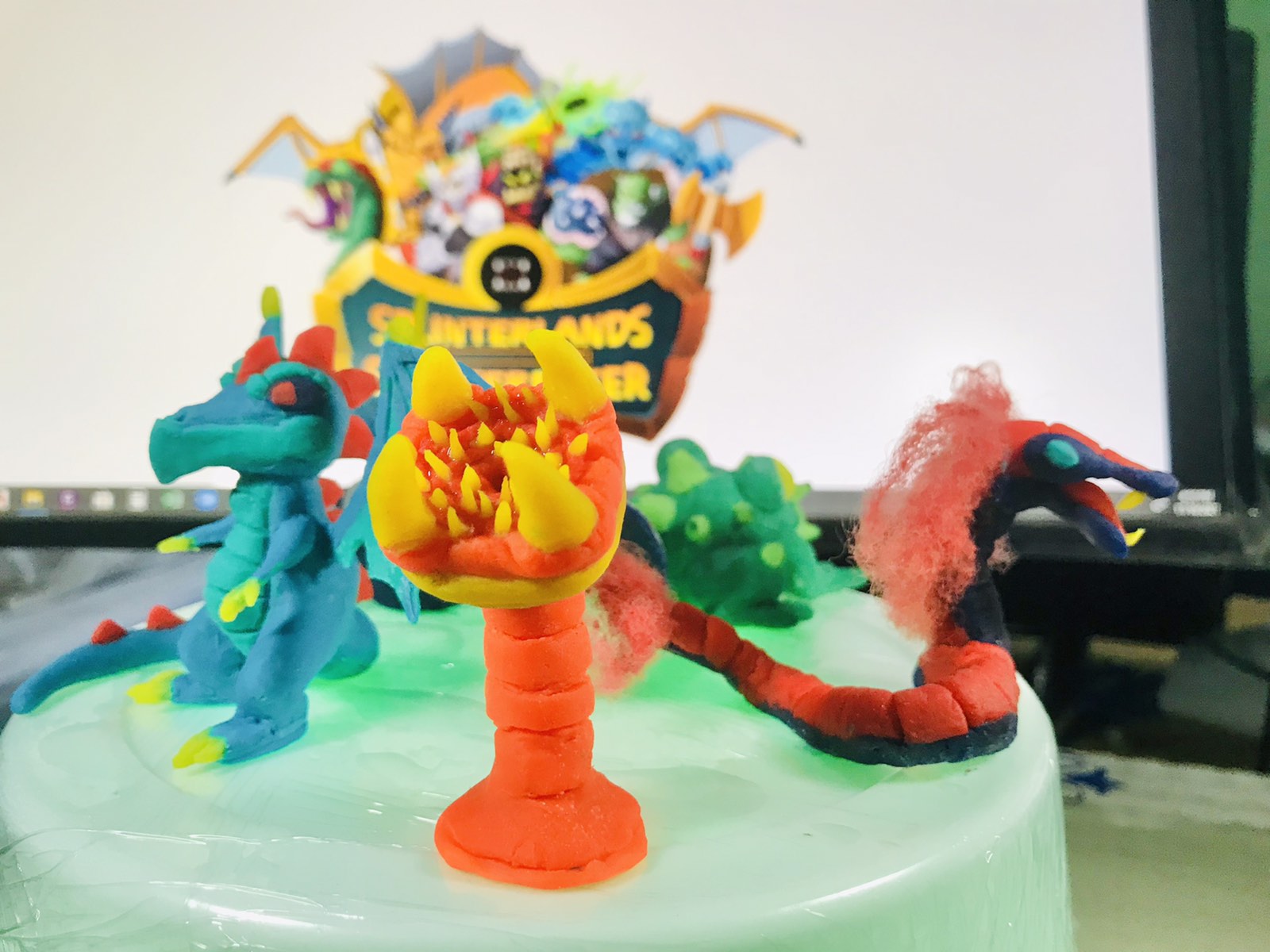 Nice to hear. Oh yes, monster-curator is the best in the business.

I delegated monster-curator some as well

When you stake your SPT, will you still recieve airdrop points?

excellent article, I am new to HIVE and tokens so I always found it a bit unclear

Thanks for the great guide. Just needed to figure out that you used leodex.io to do this delegate / undelegate thingy. (or i missed it).
Keep up the good work!👍