It's my brawl battle review again! Time for a new cover picture because I want to experiment on the different covers and find a suitable one. I have been trying on different designs and positions but I can't seem to make it nice? 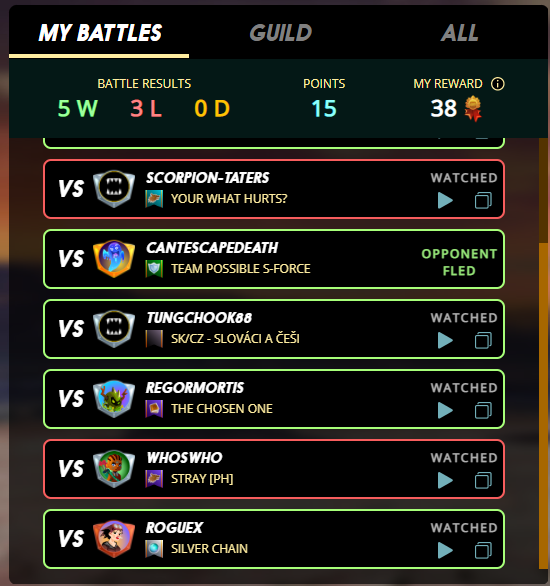 Let's review the battles and it's also one of those lucky times where the opponent fled.

With the earthquake ruleset, I tried to find which summoner has a more suitable flying monster so I chose obsidian. Since it is the silenced summoner ruleset, I should choose a summoner with a lower mana but I do not have other summoner so I can't choose a cheaper earth summoner. The match started with the opponent having more cards than me and their health was also similar to mine. So I thought, it's a sure win for the opponent. But when I watched, it was actually quite a close match because both our regal peryton have the same health at the end. The only difference was who attacked first. In which I lost here. Since the opponent's regal peryton attacked first, I obviously lost.
😢

Though the stampede ruleset favoured trample ability, it didn't allow water(which was the only splinter where I had the card with trample ability.) Our lineup is actually quite similar except with difference in card and the position. They had more attackers so my cursed windeku died first but I had riftwing which saved me a few times because of the scavenge ability which helped me cushion some attacks. This allowed me to gain advantage over the attacking of the opponent's disintegrator. I could quickly get back my melee attack to their original state. Their silent sha-vi was gotten rid of before it was able to attack my card. And phew, lucky they missed my dhampir stalker which let me have more health than the opponent's.
😄

Well, the miss was really frustrating. But what to do? There was a card with 5 speed, how to beat? All the other monsters had quite high health and armour too. Compared to mine, it was not very nice of course, I only had a card with 9 health and no armour. Since it is back to basics, armour could be really useful here.
😢

Having more higher speed card was definitely a plus because I could quickly get rid of their cards before they could attack mine. Can't even utilise the knockout ruleset since I do not have a card that can stun opponent 😵💫
But all's good because I didn't need to use knockout to win
😄

This is quite an interesting battle because of the 3 magic and doctor blight's affliction which would make my card unable to heal. Lucky I could quickly get rid of the disintegrator but my deeplurker was killed right after its melee attack went back to original. In the end couldn't even attack with its full power. I think having the higher health in my cards helped me with the magic attacks because I could heal too.
😄

Slight advantage here as I was able to attack first, so I could get rid of their mycelic slipspawn before it was able to heal. This helped me buy some time before they attacked my other magic cards since they have more magic attack than me. Even though the opponent had armour, it didn't make any difference to the attacks since all my cards had magic attack.
😄

Thx for reading! Do join the game if you are interested :)