@deathstarer7 56
about 2 months ago
Splinterlands "Before the chaos gate opened, the towered city of Darkholde was peaceful and quiet. Situated in the cold, Blackworth mountain range, it was presided over by a long-standing noble family and governed by Baron Kutziq Neculai. If the citizens knew the truth about their governor, then maybe they wouldn’t have been so loyal, but the Baron’s tastes were sated with great restraint and he truly did care for them, taking only what he must and never more than he had to. For Kutziq was a vampire, a race as ancient as the stones they’d used to build the city. A man who loved his people in many ways, including their unique flavour.

However, when this vampire chooses to hunt, they take on whole new guise, almost shifting their form to become more accomplished for the chase. Pointed ears extend refining their hearing and their eyes change colour affording the ability to see in the dark – their preferred time to hunt. Long fangs grow from their mouth and vicious talons sprout from their fingers. But what you can’t see in either form is the power they hold within their mind, an ability to attack at a spiritual level when they eventually find their adversary, squeezing the very life from them; a ranged attack that if not avoided, will have devastating consequences." 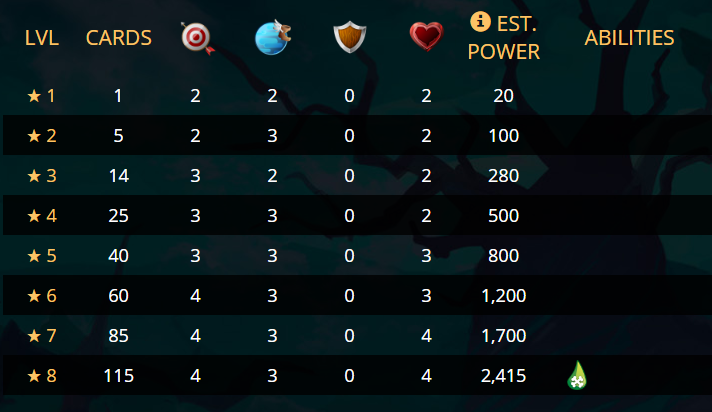 Its poison ability only comes at level 8 which is very high, is it worth it? I have no idea.

I think it is a great card since it only costs 3 mana and has 2 attacks. Its health is low so we need to protect it. Its speed is also not 1 which makes it a pretty good cheap card. I usually use it to fill the mana or slots if there were still some left since it is cheap and has 2 attacks, making it quite a good filler other than the 1 mana cards that I use to fill and distract the opponent.

The battle mana cap was 25 with the standard ruleset.

I have 1 more card than the opponent and both of us used different summoners.

The opponent's summoner did not have effect on me while mine was able to reduce their health. The goblin thief missed hitting the tower griffin and that helped in protecting my cards. But since it only had 1 attack, it was unable to help reduce the health of the opponent's frontal card. Their failed summoner has also become a distraction to my cards' sneak attack since I didn't have any magic attacks. So in the sense, failed summoner was protecting their middle cards. I had to quickly get rid of it though because I need to get rid of the goblin thief and venari scout before it does much damage to my cards. At least we were able to get rid of the failed summoner in this round! Though their venari scout got rid of one of my sneak attack sigh..

Not bad that my cursed windeku was able to last to this round since the mycelic infantry had 3 attacks and also shield ability which reduce damage from opponent, making it harder for my cards to KO their frontal card.

Mycelic infantry only had very few health left and since it only has a speed of 1, it was a guaranteed shot from both of my cards, making it a successful attack and KO of the mycelic infantry. Next up is just the start of my cards battling regal peryton.

And there we have it, the opponent got KO'ed.

Yes because it has 2 range attacks and can reduce more of the opponent's health. There is also a chance of opponent putting cards with the shield ability which makes cards with 1 attack useless. Having 2 attacks will make sure that there it some damage done. It is also a cheap card so I love using it, be it to fill in slots or in in low mana cap. In a high mana cap, I wouldn't use it even if I like it since there are better cards like dhampir stalker.

!PIZZA !PGM for you!