So I've got to be honest, as a relative newcomer to the game I haven't used the dragon splinter that much (if at all) before this. Doing this quest has really opened my eyes to how powerful it can be with the right strategy and I'll definitely be using them much more moving forwards!

Another thing that I'm really happy about is that this challenge has introduced me to probably my new favourite card; 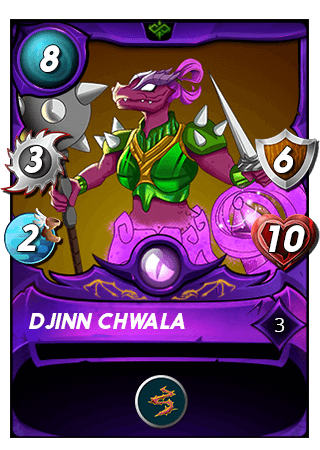 I initially rented it just for the challenge for an insanley cheap 0.9 DEC / day, but after using it I'm going to have to purchase it for myself. In pretty much every battle where the mana allows me to select it I win (I imagine this becomes less likely at higher levels 😆).

So my battle is here;

As you'll see from the video link of the battle my full team was;

My plan was to combine the high health / shield stats of Djinn Chwala with some of my favourite fire splinter cards, relying on Efreet Elders last stand ability to bring things home if required. Thankfully that wasn't really needed as my opponent didn't really field the best team. The thorns ability of DC added to his three melee damage caused havoc to his Unicorn Mustang.

To conclude I'd definitely recommend the dragon splinter to any other new comers to the game - or anyone else who hasn't used them too much for that matter. I hope my first post wasn't too rambling and that it formats OK... apologies if not 😂!

Congratulations @djm90! You have completed the following achievement on the Hive blockchain and have been rewarded with new badge(s) :

Hello @djm90! This is @indayclara from @ocd (Original Content Decentralized) team. We saw that you already posted your first blog here in Hive! Congratulations and welcome! Great to hear you are enjoying Splinterlands.

Also, the best way to start your journey here in Hive is do an awesome introduction post. You can choose on whatever information you would like to share and be creative as you want to be. This will help other Hivers get to know you and be comfortable supporting your works here.

Nothing wrong with this as a first post. Welcome to Hive. There's much more to it than Splinterlands, so have fun.

Thanks! I'm slowly starting to find my way around :)