@evernoticethat 68
3 months ago (Edited)
LeoFinance
Started up with Splinterlands this week, and man lemme tell ya, this game should be classified as a schedule 2 drug. I was up late into the night fighting battle after battle and losing more than I won, but having the time of my life!

Recently, I was in LeoMarketTalk chat sharing my tales of spending untold hours playing an old strategy game: Sid Meier’s Alpha Centauri. This over 20-year-old title with 1999 graphics got almost everything right. It had that "just one more turn" addictiveness to it that elude many others and even though it and it's sequel Alien Crossfire haven't been updated in 20 years, there's still a committed base of devoted players staring at their screens all these years later.

Splinterlands is that kind of game.

Splinterlands on the blockchain You know I'm serious about a game when I start watching tutorials and taking notes on it. I've got my notebook started, where I list the card attributes of the different recommended abilities and classes that a beginning player should collect. Everytime I'd lose, there was the thought that if I'd only had a healer or upgraded a card or maybe added a second tank, I might have won. The period right before a battle is interesting as you have to choose carefully when building your team. This is where I can see the utility of buying (or renting) new cards and upgrading the ones you have.

Notice I've said nothing about making money with the game, that's yet another consideration. Here the focus is on having fun and seeing the awesome replayability that Splinterlands has to offer. I had some beta cards that I'd gotten early on and didn't open until late last year. Couldn't understand what the fuss was all about until opening that deck and getting started. That's yet another thing which makes the experience even "stickier" the sheer joy in opening a new pack and hoping for the card of your dreams which will help propel you to ever higher levels in-game.

One can see why certain cards command such high prices in the Splinterlands market. Some start at just a few cents, all the way up to thousands of dollars. Some players have invested a decent amount of money into the game, while also making a tidy sum playing as well. #Play2Earn indeed. This is yet another area where if you "play your cards right" (pun intended), you can really come out on top. Is Splinterlands as addictive as Sid Meier’s Alpha Centauri?

Like that fullness you feel after a great meal, I eventually had to push myself away from the desk with the happy realization that I may just have found the spiritual successor to Sid Meier’s Alpha Centauri. Have I spent money in Splinterlands? You bet! Have I started taking notes on tips about the best starting cards and strategies used to win battles? Absolutely! Playing this well-designed game is sheer joy and I applaud the devs for their creativity. BTW, when Splinterlands was in development, they were soliciting ideas and looking for people to come onboard, I tried in vain to add my thoughts in helping to create the game world and the characters that infest its dark recesses. We were in a Discord live chat and try as I might, I could not get the attention of the developer who was focused on the people he knew even when other members were telling him I was trying to reach him. That is a symptom of what I call being in "The Discord Bubble” and one of the reasons I don't visit as much anymore, people get caught up talking only to friends.

As a long time gamer and blogger, I'd developed notes on the game world, character attributes, lore and suggestions on how to make #Splinterlands as compelling as Alpha Centauri. After well over 1000 hours (and many more) playing that game and others, I'd learned what made them so addictive and wanted to be involved in doing the same for Splinterlands. Again and again I asked if everyone could see my messages in Discord chat thinking there was a glitch blocking them, but people said yes, they could see me. For whatever reason, I was never able to get the attention of the developer as he was so engrossed in chatting with the people he knew.

Later, a future member of the team messaged me and offered to pass my thoughts along, but that event was a culmination of months and months of trying to engage in Discord and being constantly ignored while seeing friends talking only to their buddies. However, it looks like they've done just fine without my input and the success of the game is obvious now. Recently a new game has started up and a friend in LeoMarketTalk encouraged me to head on over to their Discord after seeing my comments on what made Alpha Centauri so much fun to play. That brought back memories of sending up flare after flare trying to get my suggestions on Splinterlands heard over the din of the crowd.

dCity must have fallen into this trap as I visited their Discord in the run-up to the release of their third edition cards and again couldn't get noticed. You'd see the same moldy group in there day after day. The game was awesome until the update with an easy to use market, and I loved visiting my city daily to check on its progress and buy new cards. However, the most recent changes turned what was a fun, addictive game into a complicated mess. Tiny menus and boxes hiding information, now result in a way too "busy" interface requiring too many clicks and screens in order to get anything done. It's clear that the tiny Discord group became an echo chamber where they threw everything in without thinking about playability.

Upon launching dCity, the screen is littered with choices. Layers of tabs and a dizzying array of decisions assault a new player. After wading through seemingly endless menu boxes, I thought "what happened? did they test this?" Even something as simple as buying a building card, which was easy in the older editions, was now riven with complexity. You used to be able to scroll down an orderly list of cards for sale, and buy what you wanted. But now have to navigate a digital obstacle course instead of just clicking on a simple, obvious "buy it now" button.

This update was made by someone used to staring at trading screens all day. It was made for his advanced trading friends who do the same, with no thought about it being a barrier to bringing new players into the game.

dCity now has so many different menus and screens, that it's obvious they listened only to suggestions made by the hardcore players who wanted a more complex interface. Nobody thought about how daunting it would be to new players. It's almost like they said "fuck it, let's just throw in everything that we can" the way Samsung adds endless features nobody uses to their Android phones, while Apple only seeds iPhone with features that actually enhance usability. I can't remember the last time I checked in on my city. That is a testament of a dev being surrounded by too few people all cross-pollinating what everyone else is saying.

Many days, I'd pop into the dCity Discord and try to join in conversations. Hours later I'd check back to see if there'd been any responses to my comments, but time after time aside from saying hi, there was none. Because believe me, if I'd had any input on the update, I'd have said "Whoa! you've got to simplify this to bring more people in." Possibly even a basic interface for those just starting out (dCity Classic), and a dCity Pro UI for more advanced players. Telling the dev what you think he wants to hear doesn't make for great game feedback. Getting good data during game development is very valuable. There is no value in being a digital sycophant. I don't know how they did it, but they somehow managed to ruin a great game. Update: I just checked dCity and they’ve finally gotten rid of that tiny little box with the hidden data on the lower right. I hope they continue to evolve the game with a cleaner interface to attract new players.

I applaud the easy to use UI of Splinterlands. They got it right.

But I will say this, notes to devs: If you host a live chat asking for input into a future blockchain game, don't just spend the entire session chatting with your buddies, give everyone an opportunity to share their creative ideas, tips and suggestions in order to make your game even better.

If you liked this article, please give an upvote and rehive.

Please check out my recent posts:

Congratulations @evernoticethat! You have completed the following achievement on the Hive blockchain and have been rewarded with new badge(s) :

I applaud the easy to use UI of Splinterlands. They got it right.

Yes, they did! I'm not the best when it comes to maneuvering around new games (or for that matter any platform). But with Splinterlands UI there was only a slight learning curve which was easily satisfied - now if only game play was as easy to figure out!

Thanks, and you bet they got it right! I've only had this "one more turn" feeling with just a handful of games:

I have been playing for a few years, and I put together this tutorial video for new players that is sectioned off so it is easy to skip around to the parts you need help with!

Also I have my notebook as well! 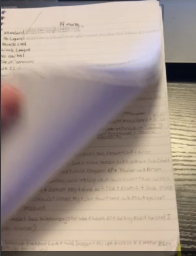 Thanks so much! Will add that to the list of assest to check out. I thought I was going overboard with the notes, looks like I wasn't alone! :)

What happened was I began noticing opponents with seemingly "weak" cards kicking my ass. Then I took note of the little circles at the bottom of their cards.

Like Neo in the Matrix they'd had upgrades, and their blast effect was winning the day! Now I know to upgrade my Summoner before my Creeping Ooze. :)

Lol nice! Yeah I just got tired of losing to the same bots so I just started writing down everything they played for every ruleset, mana cost, and defense for each one lol.. I did it for a few weeks, but I never use it now, because I wrote it so much that I memorized it all and developed a strategy from doing that.

Yea I thought it was fairly straight forward to play the game. The only thing that required experimenting was learning about the abilities and what card setups are good.

Sorry your suggestions got lost in the shuffle. Feel free to contact me with feedback/suggestions anytime!

Communication about Splinterlands is coming on various social media by the players themselves. It had over time brought many gamers that stayed since they joined. The updates in the game are staking up and the growth is remarkable. SPS is a game changer I think. Thank you for sharing.