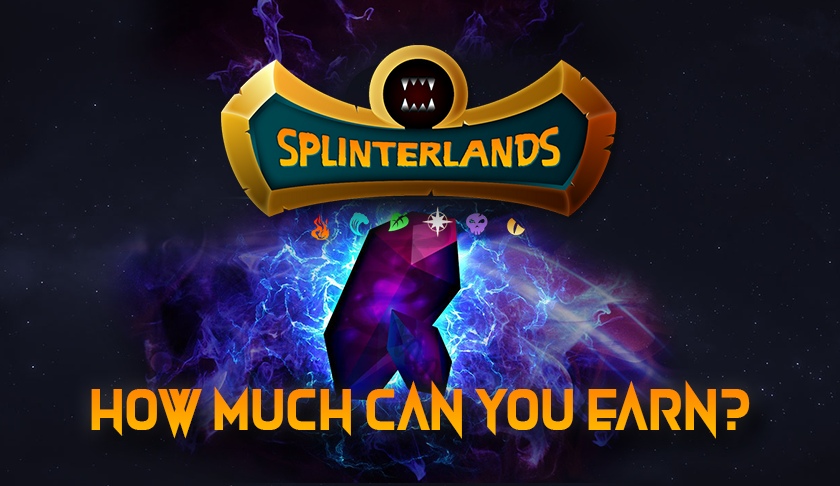 What does an account with all cards on the maximum level in Splinterlands earn? If you don't earn those cards yourself, it is possible to rent some of them and compete at the highest level.

I have broken down the last season earnings in this post for you. One season in Splinterlands lasts for 14 days. I am not playing myself but share my cards with @dejan.vucovic, who is a much better player than I am. My cards are delegated to the @monster-grinder.

Let's have a look what he accomplished in the past season and how much Dark Energy Crystals (DEC) and Splintershards (SPS) we got:

He positioned rank 9 in the Champions league - Awesome!

Each win in a ranked battle rewards you with DEC. The higher your ranking, the more DEC you receive for each win. The amount also depends heavily on how many others are playing on that day and what the price of DEC is right, which affects its inflation and hence how much is paid out. Over the past season we got 12k DEC together.

Estimated values based on the current prices of cards listed in the official Splinterlands market.

At the end of the bi-weekly season we get the season rewards in form of further loot chests, depending on what league we finish in. For Champion I are 150 loot chests rewarded.

Each league has its own ladder and all top positions from Bronze up to Champion are receiving a ladder bonus at the end of the season. For finishing rank 9 in Champions we get 60,000 DEC. 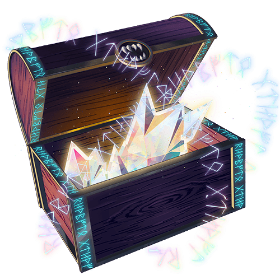 Since the Splintershards have been released, tournament prizes have switched from DEC to SPS and the total value increased massively. There are now multiple tournaments a week between $10,000 and $60,000 prize pools. They require staked SPS in the amount of the prize pool to enter, plus a hefty entry fee.

Below are both the entry fees and the prizes that @monster-grinder was able to win during the past season. 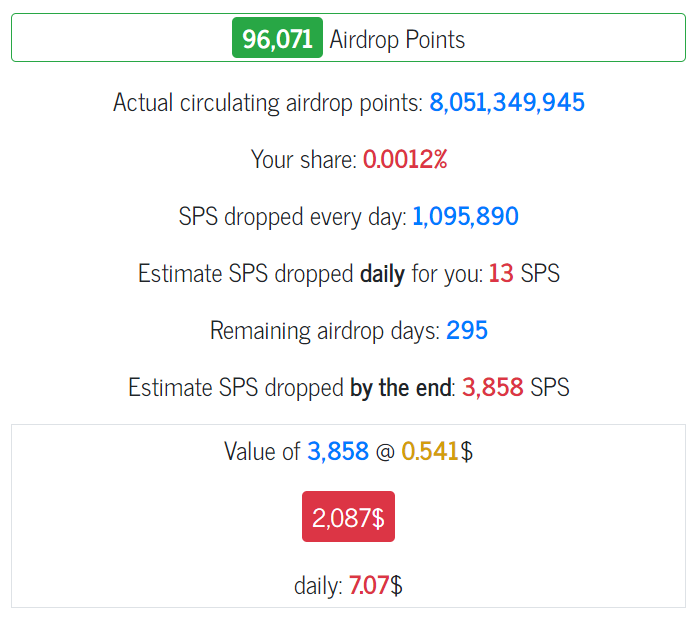 The Splintershards airdrop is continuing and there are 295 days left (down from 365 days). We got a 95,741 DEC from this season in total (taking the average DEC value of the Loot Chests, not the actual value of what was in the chest).

Assuming we just keep holding this DEC until the end of the SPS airdrop, we would get 13 SPS daily and 3,858 SPS in total.

If you stake your SPS in-game, you will currently get 76% APR in SPS rewards (tendency sinking, the more SPS is staked), that are claimable every 3 seconds. I have no idea how to do the math on that for the amount of SPS we daily get from this seasons returns, assuming we stake it daily and re-stake the staking rewards for a compounding effect. But it adds a nice chunk on top for sure.

For staking SPS you will receive vouchers for the pre-sale of the next card edition Chaos Legion. These vouchers are tokens, that can be traded. You will need $4 plus a voucher token for each pack in the pre-sale. Demand is massive and it is speculated that these vouchers will be traded for several Dollars each. If we stake the daily SPS airdrops each day we will get a few of these vouchers as well.

The amount of income streams in Splinterlands is enormous. You can post about the game on Splintertalk.io and earn HIVE, SPT, LEO and ONEUP (among other tokens) with the upvotes you receive.

Soon there will be SPS rewards for ranked matches, two leagues instead of one for Modern and Wild format with a new and additional DEC inflation, SPS rewards for Guild Brawls plus earn Merits with which you can buy special Gladius packs with Brawl cards, which are account-bound but do have a DEC burn value, Land expansion with SPS rewards and resources...

Actually I stop it here because none of that is realized yet and I think we have seen enough for today about how much you can earn in Splinterlands. ;-)

For our LeoFinance guide to Splinterlands DEC, we were finding it hard to clearly express how much you can earn from the game.

You've kept it clear and shown how an actual competitive wage can be earned from Splinterlands.

So you're basically saying....Step up my game and get out of Gold leagues as fast as possible?

That guy you delegate to looks like a real winner at the game for sure, imgine when player staking comes around too.

@monster-grinder is my playing account that I use to hand out the private posting key to my player, without compromising any of my assets.

That wasn't just one tournament but multiple over a season. But yes, that is a lot of money for entry fees!

Thanks for sharing this @flauwy! I have always wondered how much are the actual earnings for top-tier players and card owners. Congratulations to you and @dejan.vucovic for a solid season!

For our LeoFinance guide to Splinterlands DEC, we were finding it hard to clearly express how much you can earn from the game.

You've kept it clear and shown how an actual competitive wage can be earned from Splinterlands.

What's different between SPT and SPS. Please SPS do confuse. I think SPS and SPT are the same thing.

Please were can I buy this SPS

You can buy it on Pancakeswap on the Binance Smart Chain. Or you can buy it on Hive-Engine via LeoDex or TribalDex. There are even various liquidity pools for SPS on Tribaldex under https://tribaldex.com/dieselpools/

Please I have leodex , can you send me the steps I will use to buy from leo Dex

I want to invest in it

Splinterlands is a no-brainer for someone who is high on P2E gaming! I can count 6-7 different ways to make money from it.

Club your playing and investing with content creation and earn 3-4 tokens more at once. 🚀🚀

I don't think any other game has so much earning potential as Splinterlands has.

In Splinterlands you can earn as much as you put the time in it. There are tremendous ways to earn and one could tap into all these channels and make a living out of it. I barely succeed to complete the Daily Quests with my 5 accounts and I feel overworked after that... :))

This shows that splinterland is growing and is a great opportunity.

I was generating almost $50 a week in bronze league 3 with battle rewards and chests, and when I rented some cards and moved up to silver league I was earning more, splinterlands is the best game very profitable you just have to know how to play it.

really great post, for me the earnings here are unlimited it's just the way how people will try to approach it, focus on it, and trust the process, for real there's always no easy way out but if you work hard definitely tons and tons of blessings will be there soon.

Ive had SPL for ever and Im still so lost...

Well this is certainly great motivation for me to go play some more Splinterlands!

There's still huge potential for anyone getting involved with splinterlands right now. What it takes though is GETTING INVOLVED. For some reason most will sit back and wonder how it's possible and well let me tell you it starts with you getting in the game right now today playing, buying some SPS and sitting on it. This is what's going to get you headed in that right direction. It's not built overnight I joined the game 3 years ago.

you are really talented! I just joined recently! but i only have 2-3 accounts! but back is 1 source add entry for me! all in the silver! 20% source of my income

Good post! However I miss the time invested. Hopefully it is better than with Next Colony where I invested a lot of (night)time (and had fun) and were able to only send 300 USD to Venezuela members in the end.

I played as @powernap in that game

Impressive gains. It's amazing how Splinterlands is an ecosystem with so many options to earn money. I'm buying DEC like crazy to earn more SPS. I've also been doing very well creating content on Youtube and 3speak. Which I use to buy cards. I still don't earn that much in battles but I hope to get to those levels.

The only thing I still can't figure out, is understanding monster-curator curation. I never get SPT. Maybe he doesn't like the Spanish content. XD

I can see the big picture of it
SPS is the best!

WOW! It's all plu,s plus, plus in the Splinterlands. Nice haul!
Now I checked the monster-grinder account and it has assets worth $238k is this the cost of living large in the top 10? (I'm sure that's all just inflation values)
Do you have estimate on what you might have originally paid for these cards?

The biggest part is really the SPS rewards!
Ranked battles are only like $10 per day given that the cards you have

The best thing is, we are earning while HAVING FUN at the game and MAKING FRIENDS within the community! :D

Amazing post all around, I do alot better on the blogging side of earning yet working on the game part! $DEC snapshot morning. It peaked at $1.01 but something tells me the $1 resistance is going to crack very soon.

DEC rewards for Guild battles are a lot higher than the last 2 seasons, players will be able to play-to-rent again, and achieve higher leagues a lot easier than they did in September 2021!

At Splinterlands I only have one account and I am very satisfied with the game and the amount won. Great fun!

At Splinterlands I only have one account and I am very satisfied with the game and the amount won. Great fun!

So there really are many ways to earn in splinterlands. But how exactly can I earn from splintertalk aside from playing the game of splinterlands?

On SPS Staking, is there the possibility of unstaking? Is the unstaking procedure instant?

with the actual daily rewards im stuck on bronce III, the only way to move fordward is to buy some good/cheap cards to advance... i really love this game, still learning a lot from it... but the curve for non high investor is pretty heavy... but i will not abandon the game for this XD... very good post friend, keep the good work!!! cheers from venezuela!!

Oh wow that is insane amount of cash! I wish I had of gotten into it alot sooner but oh well. It is what it is

SEO cross-link to a similar post from the beginner perspective: