Splinterlands: My experience with the new reward system.

The first day of the new reward system is life. And this probably did cause a complete overhaul how you do play #splinterlands. At least in my case that is.
Like always when changes are executed, regardless where, what and how, there are always people in favor or against the chances. People do like evolution but often are against revolution. And in this case the overhaul of the reward system is more or less a revolution.

We have to take into mind, that Splinterlands has to satisfy lots of people. From the random player, to the investors. From the real Splinterlands addicts towards new players. It is probably hard for them to find a balance with all stakeholders in mind. They need to make sure that one way or the other the investments from the investors is protected, but they also need to lure in new players and get them to a point that they also start investing in the game. During this process they also may not forget the casual players, which are one of the backbones of the games.

This post is from my perspective. A casual player, who did invest some money into the game. I have been playing Splinterlands on or off since the early days. My perspective is based on 2 cornerstones. Did the way I was playing the game have to be changed and is it still worth playing the game, aka what do I earn with it.

Maybe the best start is to see what I did earn last. Last season I did end up in Diamond II.
I did earn:

Besides that I did earn 7267 DEC from the rental market.

Normally I do earn 7 chests in the beginning of the season. But suddenly it dawned to me that if I do want to get the same numbers of chests on a daily basis I had to increase my splinterland time a lot.
A quick calculation did learn met that I did need to win around 30 battles. Ouch!
Luckily my first daily focus was water, which is one of my stronger decks. But quickly I did ran into a loosing streak. Normally this isn't a real problem, but now with so many battles needed, you also need to focus on your capture rate. Meaning that each battle does matter. A loss is maybe even important than a win, this due to the capture rate and the drop in earning because a potential win streak is broken.
So I decided to try to win 1 chest per hour. And did reach my goal, but the playtime ... tja ... let's say that it tripled. 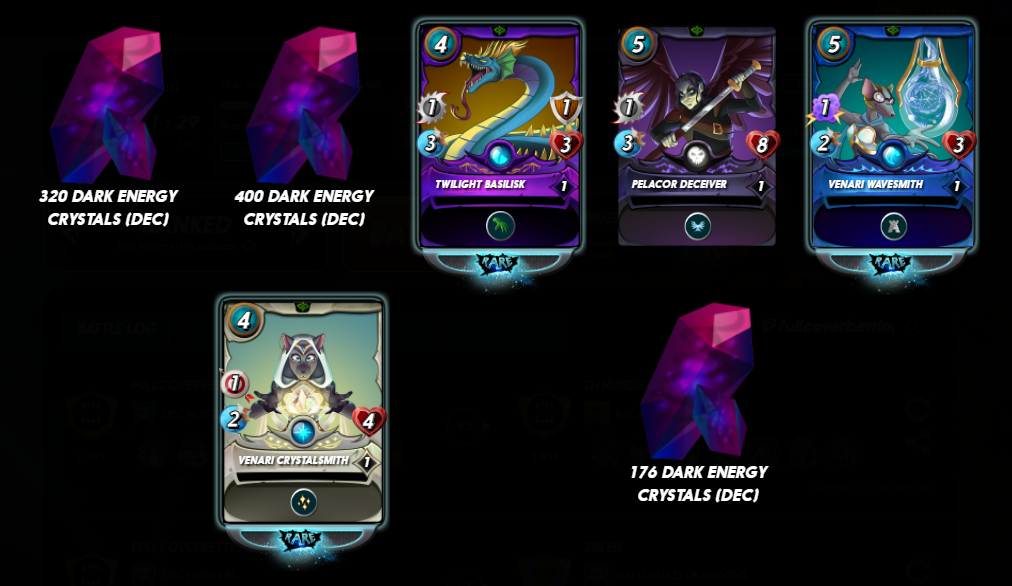 Ending the season in Diamond II, does grant me Diamond chest for the complete season, which has it's advantages. While there wasn't a big change in the cards I got, the high amount did surprise me. And I do wonder which impact this would have on the value of DEC. With 896 DEC I already did earn more DEC from the chests than last season.

To bad, my daily focus for today is fire, which will make it a lot tougher.

I have to admit, that while I don't like it, the season reward is maybe more fair. You get where you work for. Now people who do play a lot, compared to a lazy person like me, will get more rewards like it should be!

Maybe my biggest problem is the relation between the fact that the reward system now does focus in getting the players to play more battles with the capture rate. Each battle does consume around 2% of your capture rate. I do have a win ratio around 60 to 65%. So with the need to win 7 chests or around 30 battles, I do need to play around 50 to 55 battles, crushing my capture rate. The lower your capture rate is, the lower your won focus and season points are.
This is a real contradiction to me. They want us to play more and more or less force us to play more, but do have a system in place which really starts to punish you when you do play more than 25 battles. Mmhh.

I really can't remember how long ago it was that my capture rate was below 70% and still going down!

Okay the rental income in the early days of the season, aren't pretty good, but they were at least better than what I am earning now. But this could be a personal thing

I do like the change in the season rewards while this does hurt me.
I do hate the coupling between the focus points and the capture rate.
I do think that each battle suddenly does matter.
More tactical changes are needed from my side, from the amount of games played, to take each battle serious!

So yes there are good things and things I don't actually understand. But I guess at the end of the season, the income will/could change my sentiment about the changes.

Hope that works out for them, I understand catering to investors, but in these early days where you are trying to break ground one can't sneeze at traffic and new users.

Hope that works out for them, I understand catering to investors, but in these early days where you are trying to break ground one can't sneeze at traffic and new users.

Indeed without them, the game would bleed to death. New users are the backbone of a promising future. And I do think that they do fail in that aspect.
Also the reward between the different types of chests are way too big. 64 times the dec in a champions box is way too much.
!BEER

Hey @whatsup, here is a little bit of BEER from @fullcoverbetting for you. Enjoy it!

I agree with you. Overall I'm ok with this new system, but the daily focus thing is out of whack. I thought, I get one chest per day with this new system and watching tons of complaints from players on discord, I am not alone.
Season rewards will be in my favor, when I extrapolate the trajectory.

Each battle does consume around 2% of your capture rate.

My strategy will be to play every day until I hit the 75% capture rate. I will always avoid playing if CR < 75% since the daily recovery rate is 25% every 24 hours.

Aha, did think that it was 2% so thanks for the information.
I am at 65% at the moment, lower than I did want to be, but really would like me 7 chests.
!LUV

same thing here, I also only was mostly on the daily quests. All of a sudden the incentive to play a lot more is there and I am gonna take it with a new form of inspiration. For me (gold 1 player) there is a lot more to win all of a sudden, but indeed it will take a heck of a lot more time which is okay

From now on it is more that you get what you play for.

Does capture rate really matter that much with the price of DEC being so low right now? I don't know. Just something to think about.

Don’t care so much about the DEC but by the looks of it, it also has influence on the focus points.

Yeah, I just noticed that. I went back and read the post from nineteen days ago or so and it makes a lot more sense now.