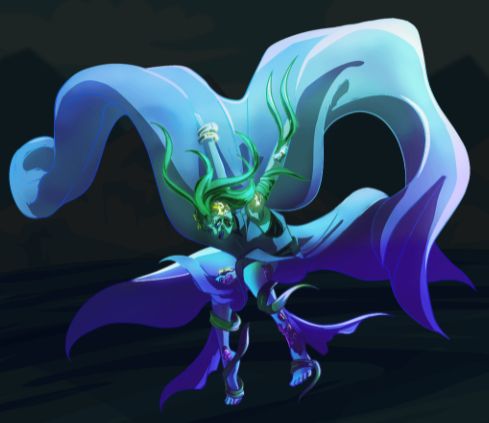 Coral Wraith is an epic card
if you use Water Splinter a lot you should know by now that she is very very useful cause her attack power , especially when it gets strengthen by Summoner's ability +1 in magic , can crush the back lines of any opponent
she is really sneaky i could say, she always operates behind enemy lines and she gives great headache even to the most powerful rival
her only disadvantage , a common disadvantage in most assassins, is that she has a low life level which makes her very very fragile
be very careful when you use it, she can either save the battle or ruin your fight so try to get familiar with her before you throw her in the battlefield
lets get a look at her stats

you can click on the following link to see my battle in which i used Coral Wraith
...Coral's Wraith battle...

let me confess something to you
Coral Wraith is not a card i own
she's been leased to me by a very good friend
this is why i love this game..it gives you so many options to play
of course she's on my purchase list , i just didn't have the chance to buy her from the market till now cause all this time i was busy collecting DEC to buy my plots
her price at $0.72 is considerably reasonable, don't forget she's an epic monster

but lets take things from the start
it was a 34 mana cap battle, you have a wide range of monsters to choose from with a mana cap like that
i knew it was going to be a very nice battle
i was on a Water Splinter quest so i didn't think much of which Splinter to get
with 34 mana cap the Summoner could be no other than Valnamor 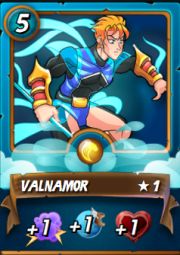 he does not only grant his teamsters with +1 in magic attack but also provides one more point of life and speed as you can see in the card
his 5 mana points was not an issue cause as mentioned above i had 34 points to use which were enough for my team!

so now let me tell you how i built my deck
this time i didn't start from the tank
most of the times when i built my deck i start choosing my monsters , as everybody i think, from my first position monster, my tank
this time , this was not the case
i told you that i had in mind to play with magic attack monsters
full attack was the plan ,no defense at all
i 'm not saying this kind of strategy always is successful but it worked pretty well in this battle

the first monster i picked was the Ruler of the Seas, his blast ability always makes a difference so i got him with no second thoughts
the next monster was the Mischievous Mermaid , the Mermaid is a monster i always pick when i want to be fast and deadly, her high agility gives me an advantage by hitting my opponent first
then it was Magi Sphinx's turn,a magic attack monster i use a lot, her attack power is high enough to cause major damage to rival monsters
after the Sphinx i chose Coral Wraith
the reason i picked CW was to cause damage to the enemy's support monsters
CW attack power in this battle was 3 points and helped a lot to disorganize my opponent
in the last position i placed my Spirit Miner ,a must have legendary card

after getting my magic attack monsters i left with only 3 mana points so i got the Battle Orca to use as a tank, but i actually didn't care about the first place monster
this was a sacrifice monster ,my main strategy was to get as much attack power as i could and i had accumulated 15 hit points with the monsters i had chosen ... massive attack power for my level!

my rival was condemned to suffer a brutal defeat , he didn't last more than 2 rounds

the battle ended before it really started
it was a totally destruction of the rival's team
as i mentioned above he hardly managed to get to round 2
everything was finished in the first round, i only lost my Battle Orca which as i told you was my sacrifice card
further than that i won 26 DEC and moved on 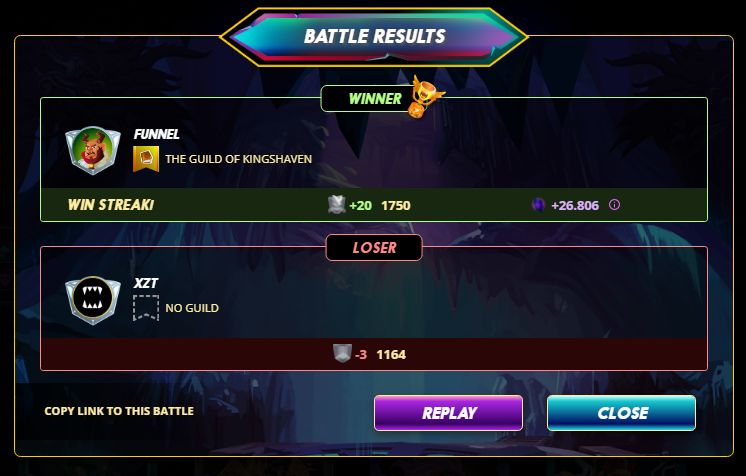 That is a tough looking magic hand for all just level 1s! Good job in your battle.

So you did well on the battlefield.
I'd suggest you work on your post format.
Maybe you'd like to change the position of the writings from center to justify.
Keep on battling.